On Tuesday, February 2, as part of a series of public hearings (of a four-person Ad Hoc Committee chaired by ex-Chief Justice of the Supreme Court Myron Nikolatos and attended by Demetra Kalogirou, Chairman of the Securities and Exchange Committee, Kyriakos Kyriakou, Assistant Chairman of the Cyprus Accounts Chamber, and Financial Commissioner Pavlos Ioannou) Acting President of Cyprus Nicos Anastasiades testified under oath.

Anastasiades said that he had nothing to do with the issuance of passports to foreign investors, and he never approved (on his own initiative) applications for participation in the Citizenship by Investment program.

During interrogation, the President of Cyprus denied any conflict of interest and corruption in the Cyprus investment program, which was cancelled last October.

"I never interceded for or against any citizenship applicant. If anyone has information to the contrary, let them produce it." - said Anastasiades.

It should be noted that when the president entered the room where the Comittee members were waiting for him, he was in a good mood and told jokes to journalists, and during interrogation he looked very calm and friendly. 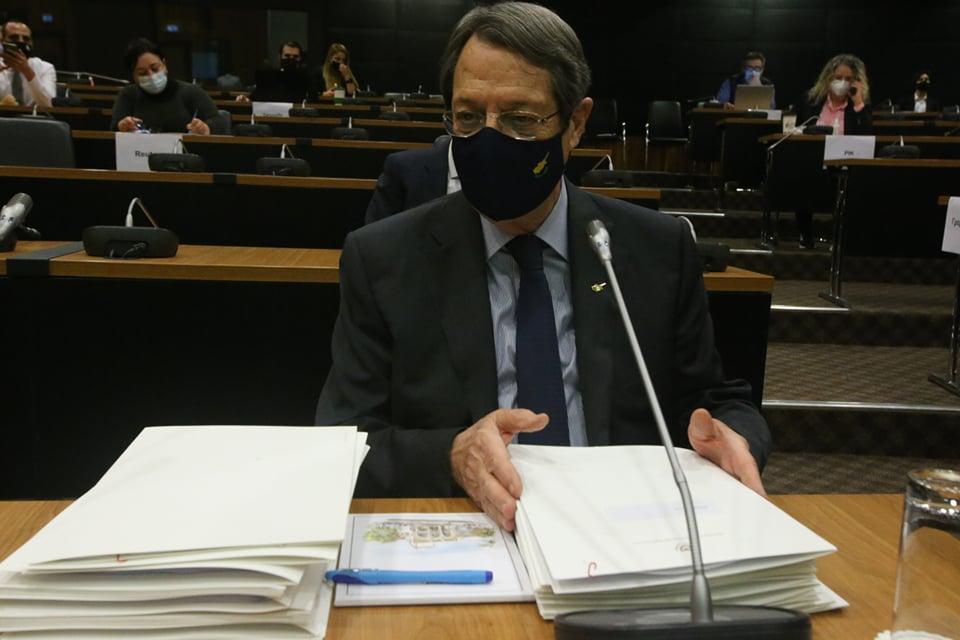 Following an opening speech in which the president told about the citizenship program evolution during his tenure, committee members asked Ananstasiadis a series of questions about the relationship between his former law firm and his son-in-law's company with the scheme.

He openly admitted that the law firm Nicos Chr. Anastasiades and Partners LLC has submitted 57 applications on behalf of foreign investors. But only a small part of these applications were approved while he was already in the presidency of Cyprus.

Anastasiades noted that in 1997, when he took over the leadership of the Disy party, he did not have much time left to properly run his law firm. And in March 2013, being elected President of the Republic of Cyprus, he had to sever all ties with Nicos Chr. Anastasiades and Partners LLC, transferring his share in the firm to his daughters.

At the same time, he stressed that his daughters are considered politically significant persons, therefore the office of Nicos Chr. Anastasiades and Partners LLC is constantly monitored by organizations such as MOKAS, Moneyval, the Bar Association and even the Auditor General.

"If I wanted to favour certain applicants or to promote my law firm, it would have been easy to assign everything to a different law firm. Why would we file 57 applications fr om my own law firm if we had something to hide?" -- the president added. 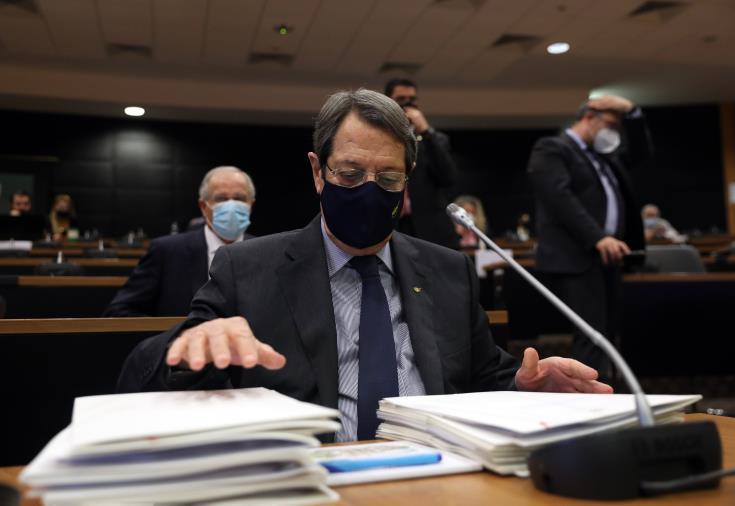 The Commission then asked Anastasiades if his son-in-law was a shareholder in the Ayia Napa Marina project and if foreigners had been issued passports for participating in the project.

"I cannot be fully responsible for the activities of my son-in-law, but I can confidently say that many shareholders received passports thanks to multi-million euro investments in the project, which met the criteria for granting citizenship at that time, - the president replied." 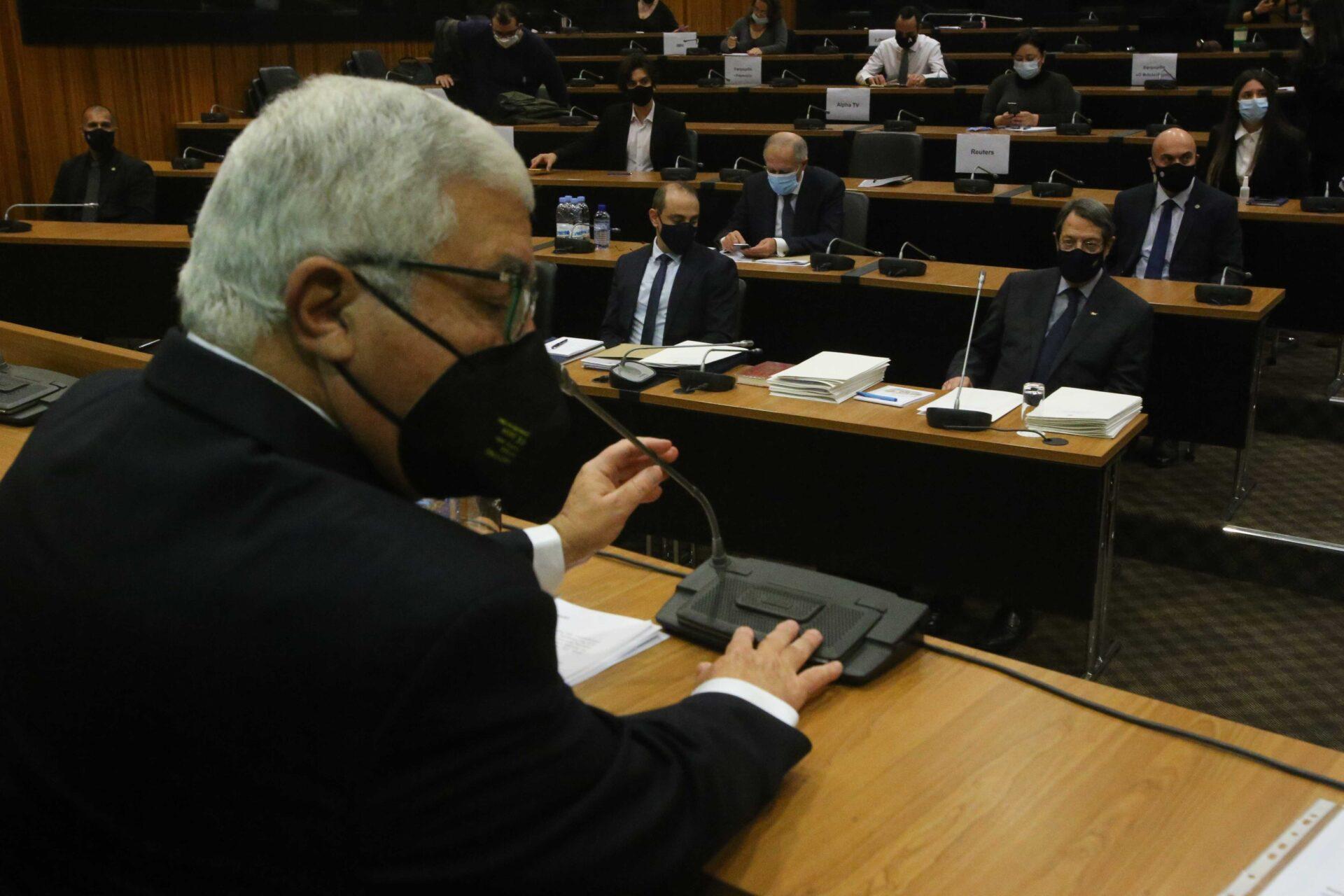 The president was then asked questions about his connection with the Saudi sheikh, who, along with dozens of his relatives, received Cyprus passport in 2015.

It should be noted that the chairman of the committee, Myron Nikolatos, advised the president to refuse to answer, otherwise he would potentially incriminate himself. But, Anastasiades was not scared and said that he had no problems with talking about this topic, as he wants to clarify this issue once and for all.

The President of Cyprus said that a group of six Saudis, the sheikh and five of his relatives, received citizenship not according to an accelerated scheme, but by collectively investing about 20 million euros in real estate, instead of the required 15. This fact, according to Anastasiades, proved that no favoritism was shown to the Saudis. In turn, this suggests that the sheikh does not owe him anything in return. 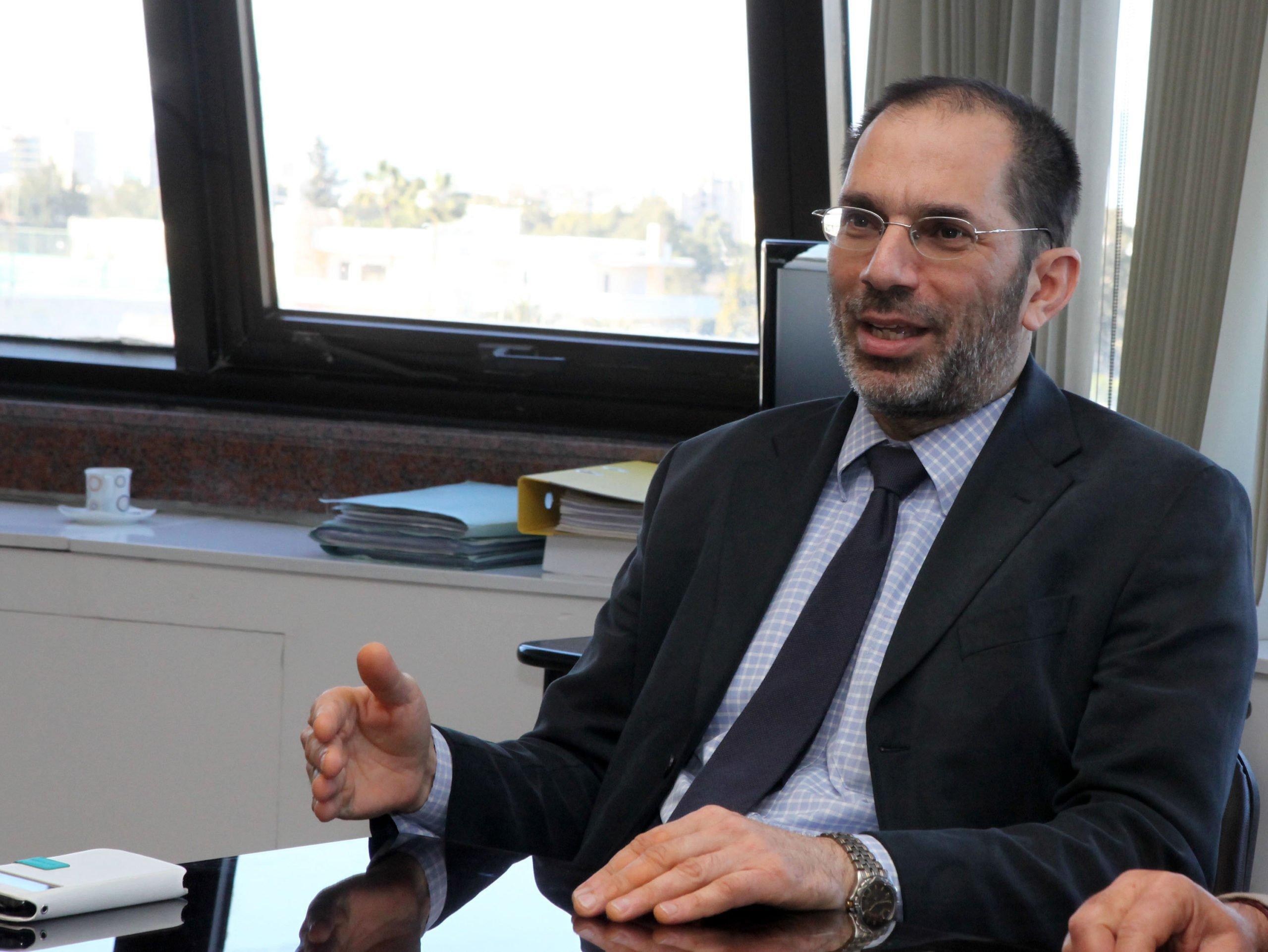 By the way, the Auditor General began an investigation into this case after it turned out that Anastasiades used the sheikh's private jet to travel to New York to visit the UN General Assembly in September 2019.

Later it turned out that the president was also flying to the Seychelles on the Saudi investor plane to spend a vacation with his family. According to the auditor general's report, the joint citizenship application was submitted by the aircraft owner, two siblings and three other relatives. All these people received Cypriot citizenship by a government decision on January 14, 2015.

According to Anastasiades, he flew to the Seychelles twice aboard an airplane, in 2015 and in 2018. But only the trip in 2018 was free as Saudi Arabia showed a gesture of goodwill.

The president was also asked about allegations that, during a trip to Athens, he mentioned that his former law firm earned €300 million in a year, which he intends to send to the Seychelles by private jet.

"I don’t even know wh ere the banks are located [in the Seychelles]. Besides, it’s not as if this were some secret trip…my daughters were posting about it," - answered Anastasiades.

Whatever it was, but the same plane was also used to transport the President to Paris in November 2019 for the EU meetings. By the way, Anastasiades explained this by the fact that the lowest air ticket price offered to him and his entourage by other air carriers at that time was 77 thousand euros. Saudi Arabia agreed to carry out the flight for only 20 thousand euros.

The President noted that the state saved about 1 million euros on such agreements, and expressed regret that such investors were criticized in the press.

"Of course I knew the Saudi, we were friends. I never acted as his lawyer." - said Anastasiades. 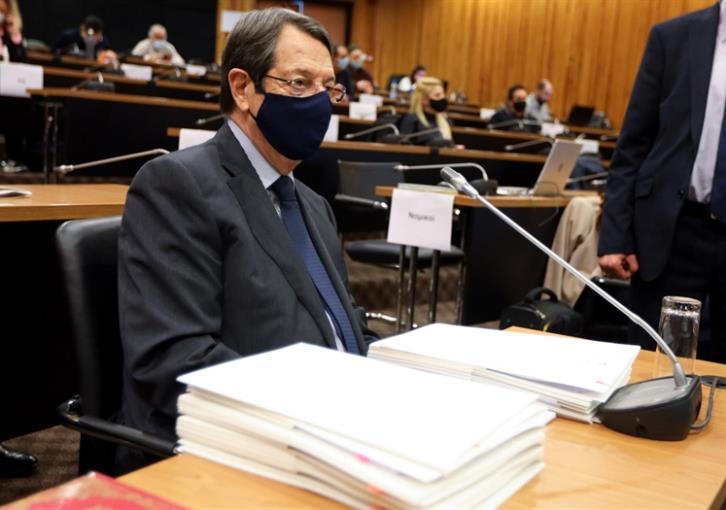 According to the president, Ministry of Finance documents show that instead of the minimum amount of 15 million euros, the Saudi family has invested about 20 million euros. The President also stressed that the naturalization of Saudi citizens is based on the criteria of the investment program and without any exceptions.

"How do you imagine it? The Saudi received citizenship not because he invested money, but because of friendly actions towards the Cypriot state? I would have been considered a bribe long ago. Fortunately, no exceptions were made, all criteria were met," the president added.

Echoing previous officials who testified before the Commission, the head of state acknowledged that the Cyprus investment scheme was flawed. For example, until 2018 there was no rigorous selection of applicants.

"The scheme’s criteria and background checks were gradually beefed up, so that by the time more safeguards were introduced in July of 2020 it became “the strictest” investment migration program in Europe" - Anastasiades said. 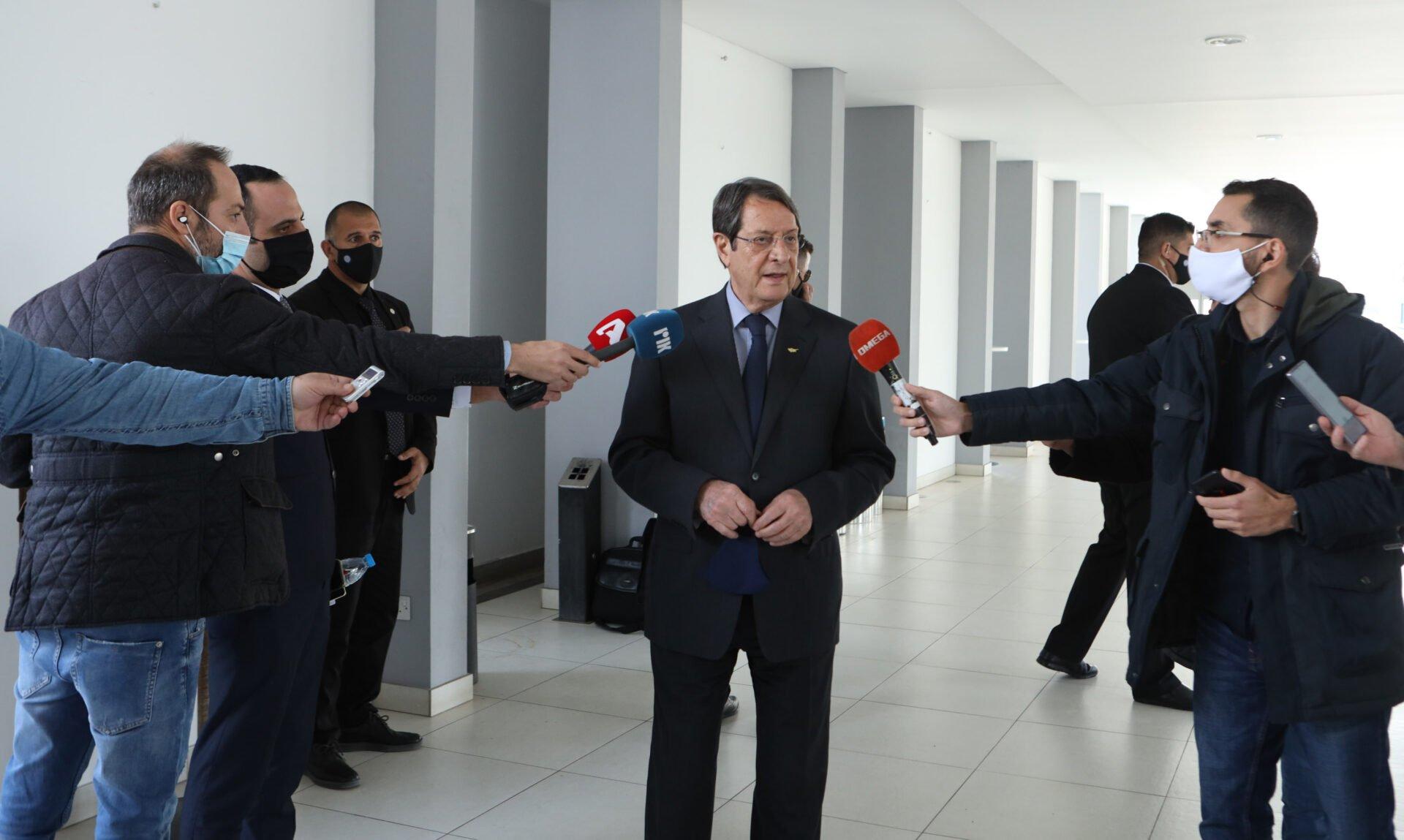 After the end of the interrogation, Anastasiades went to the journalists and said that Cyprus would no longer return to the citizenship program in exchange for investments in the island's economy, but would use other methods of attracting capital to the country.

The President stressed that the state will provide investors with various benefits, but not citizenship.

Regarding his testimony, the president said that he answered honestly and gave real facts.

"There are no difficult questions when there are reasoned answers," the president said.

Anastasiades added that the opposition has every right to criticize his actions, but at the same time made it clear that from this moment he will stop reacting to everything that will be associated with the passport scandal and will fully concentrate on the tasks facing the government. Among them, he named the solution to the Cyprus problem, taking into account the upcoming five-sided summit on the settlement on the island, the fight against the spread of the coronavirus and the resolution of the financial problems that caused the pandemic, as well as the implementation of the promised reforms of the country's governance system, as well as the health, education and justice systems.

There are serious issues for which everyone's cooperation is necessary. I am ready to cooperate with all political forces in an honest manner," the president said.