People not only erect new buildings, but quite often they leave what they have built unattended or leave their projects unfinished.

Here are ten places in Europe, which were left without proper care and gradually fell into decay. Each of them has its own story of success and oblivion.

Haludovo Palace Hotel on the island of Krk (Croatia) 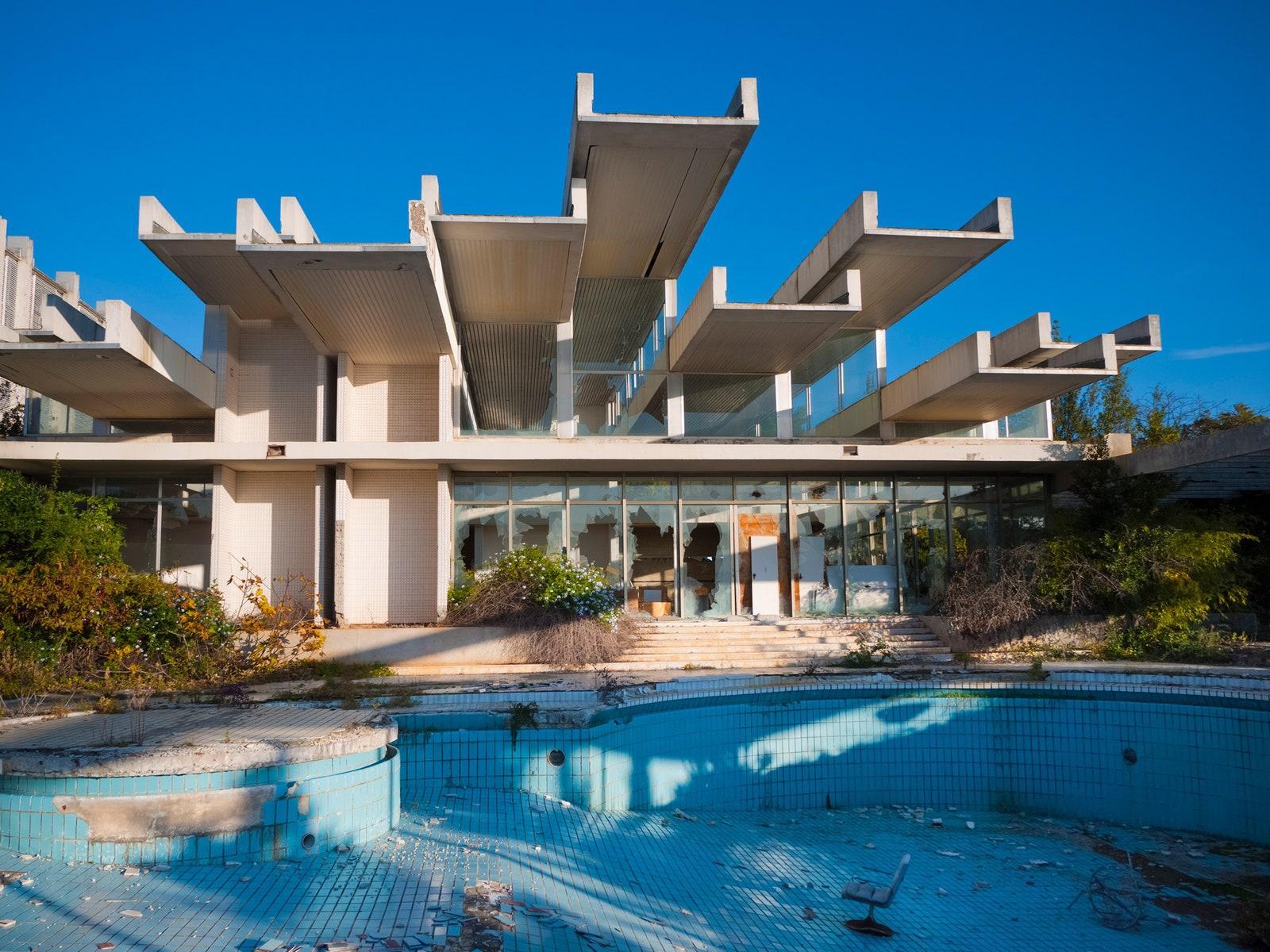 In the late 1960s, US millionaire Bob Guccione, founder and owner of Penthouse magazine, came up with an unusual plan. He decided to invest in the construction of a fashionable and expensive hotel in socialist Yugoslavia, on the island of Krk (modern Croatia).

Construction began in 1967, the hotel complex had an area of ​​1,500 m2 and was supposed to create about a thousand jobs. Guccione has invested about $45 million in his ambitious project. The hotel began to work in 1971, and next year the owner opened the Adriatic Club casino here. Guccione believed that his project would help bring the capitalist West and socialist East closer together.

Dolce Vita is the best weapon against the Cold War, the millionaire said.

However, the daring plans were not destined to come true. The hotel simply could not pay off and went bankrupt the next year after the start of work, although it functioned for a couple of years after that. During the Yugoslav wars of the 1990s, refugees hid in the hotel. In 1995 the hotel was privatized and started working again, but only for six years. Today this "monument of Yugoslav-American friendship" is completely ruined and abandoned. 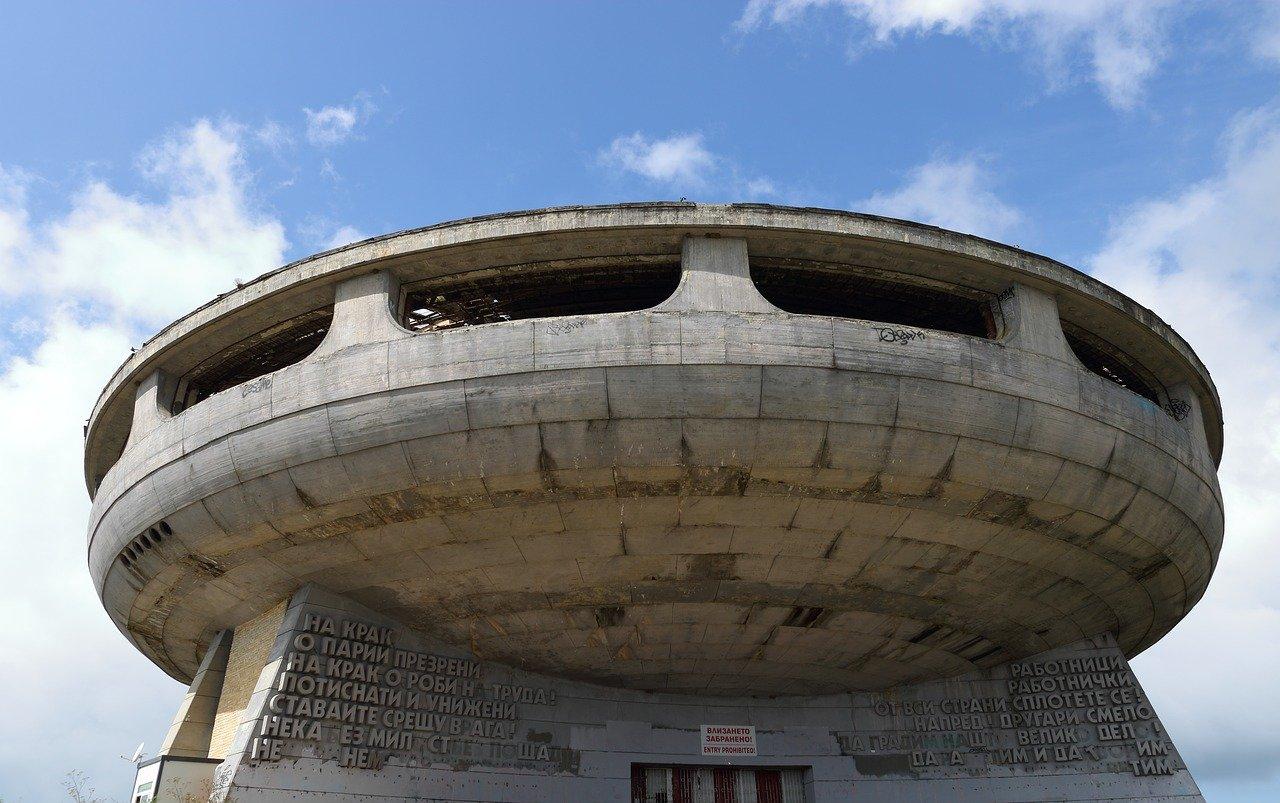 The Buzludzha peak or Hadzhi Dimitar (this name has been given since 1942) is located in central Bulgaria and rises 1,441 meters above sea level.

In 1981, a monumental house-monument was opened here, reminiscent of a huge flying saucer that landed right on the mountain. It hosted the ceremonial events of the BKP, here the kids became the pioneers, and so on. However, this did not last long. After the fall of the socialist Europe, it was abandoned and plundered.

In 2018, the Getty Foundation awarded a grant for the conservation of this amazing place. The work should be supervised by the project architect Georgi Stoilov. 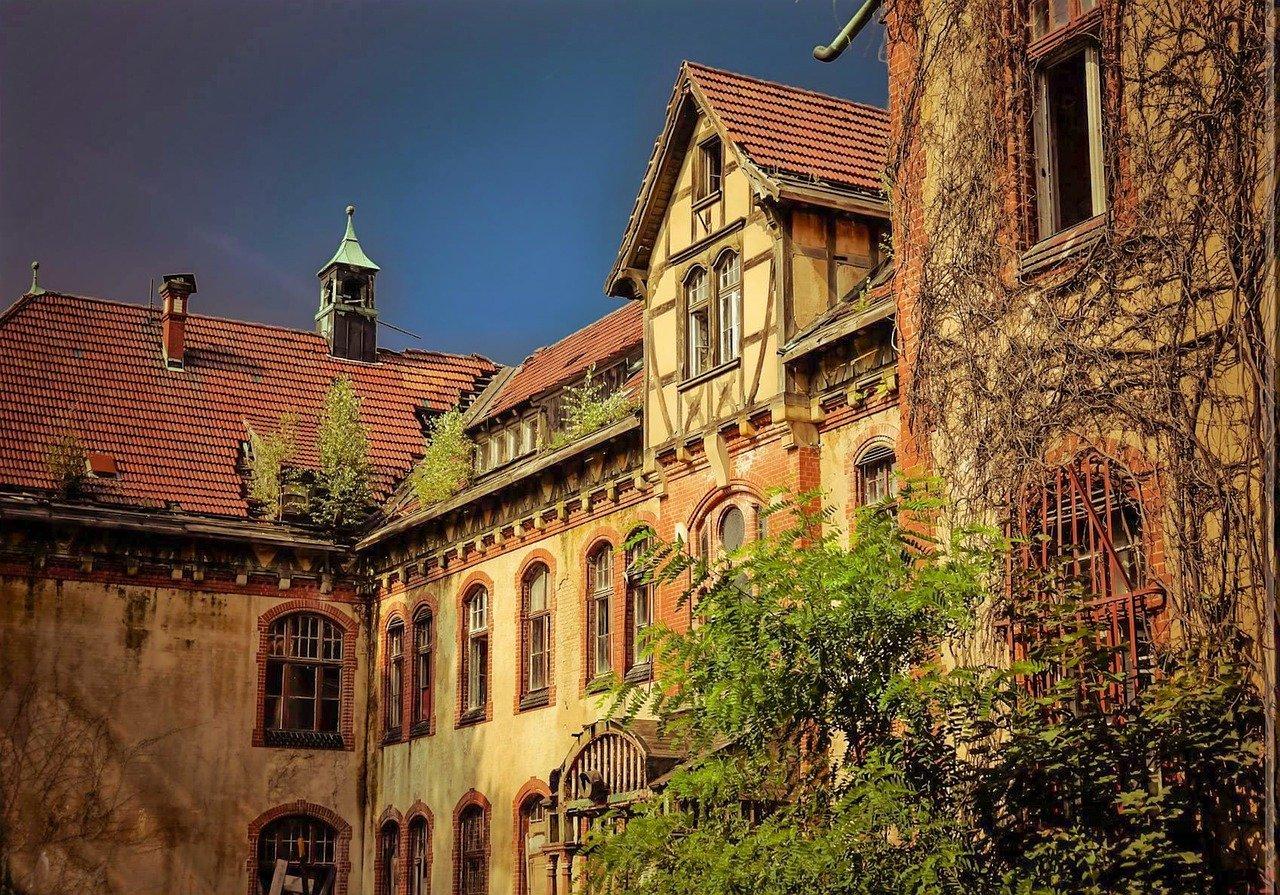 In 1889, in the city of Beelitz, in its district of Heilstätten, the Berlin Workers Insurance Society built a spacious (60 buildings) sanatorium for workers suffering from tuberculosis.

During the First World War, the clinic was converted into a military hospital under the auspices of the Red Cross. By the way, in 1916, Gefreiter (lance corporal) Adolf Hitler, wounded in the Battle of the Somme, was treated here. During World War II, the hospital was considered an elite medical facility for members of the Nazi party, and in 1945, when eastern Germany was liberated by the Red Army, it was converted into the central hospital of the Western Group of Forces.

In Soviet times, it was the largest Soviet military hospital outside the USSR.

Since the early 1990s, the hospital has been abandoned. The small town of Beelitz (only about 11,000 people) cannot afford to maintain such a huge medical facility, so the building is slowly being destroyed. 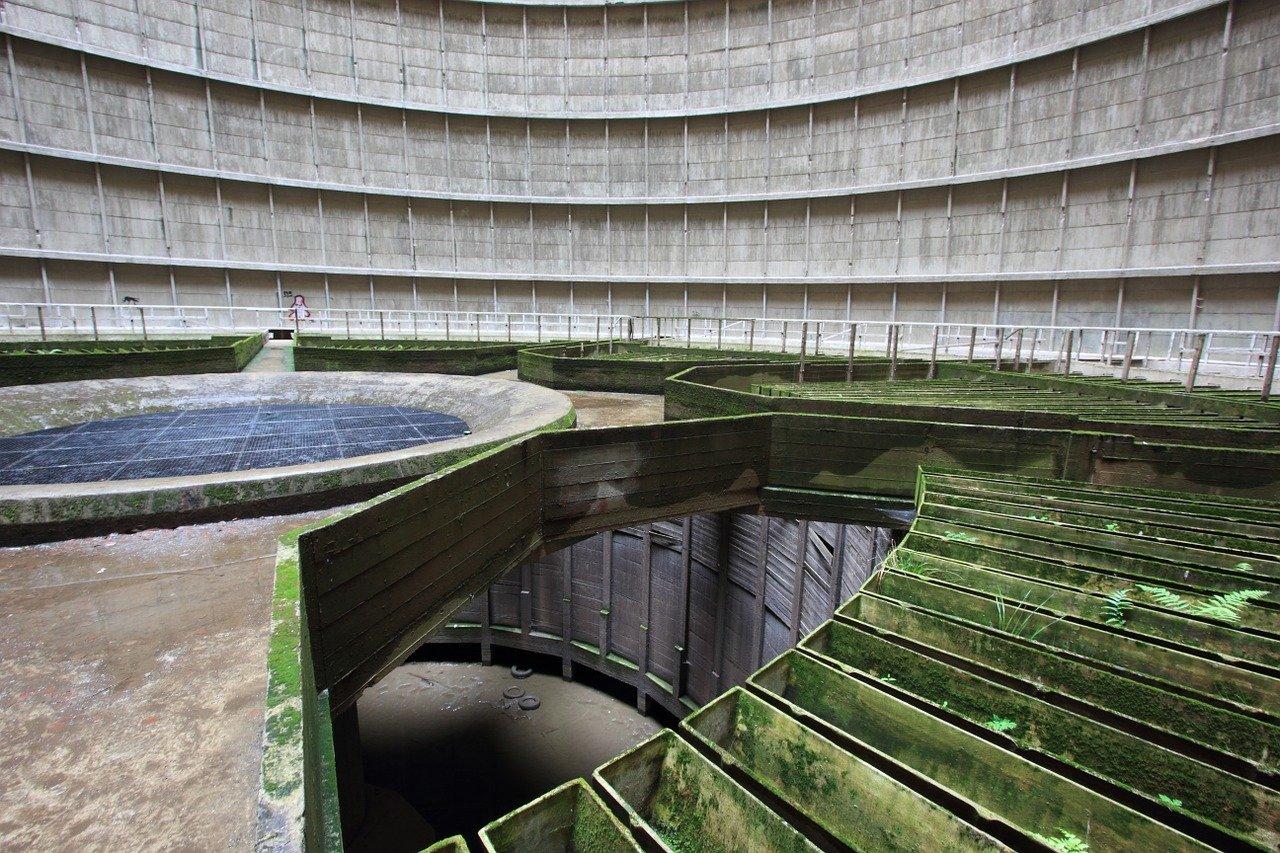 In 1921, the Belgian authorities built one of the largest coal-fired power plants near the city of Charleroi.

The cooling tower of the power plant could cool up to 1.8 million liters of hot water in one minute. By 1977, the plant had become the main electricity producer in Belgium.

Researchers have found that the Charleroi plant is responsible for 10% of all carbon dioxide emissions in Belgium. Under pressure from the Greens, the power plant was closed in 2007. Since then, it began to fall into desolation, increasingly becoming a location for filming post-apocalyptic landscapes. 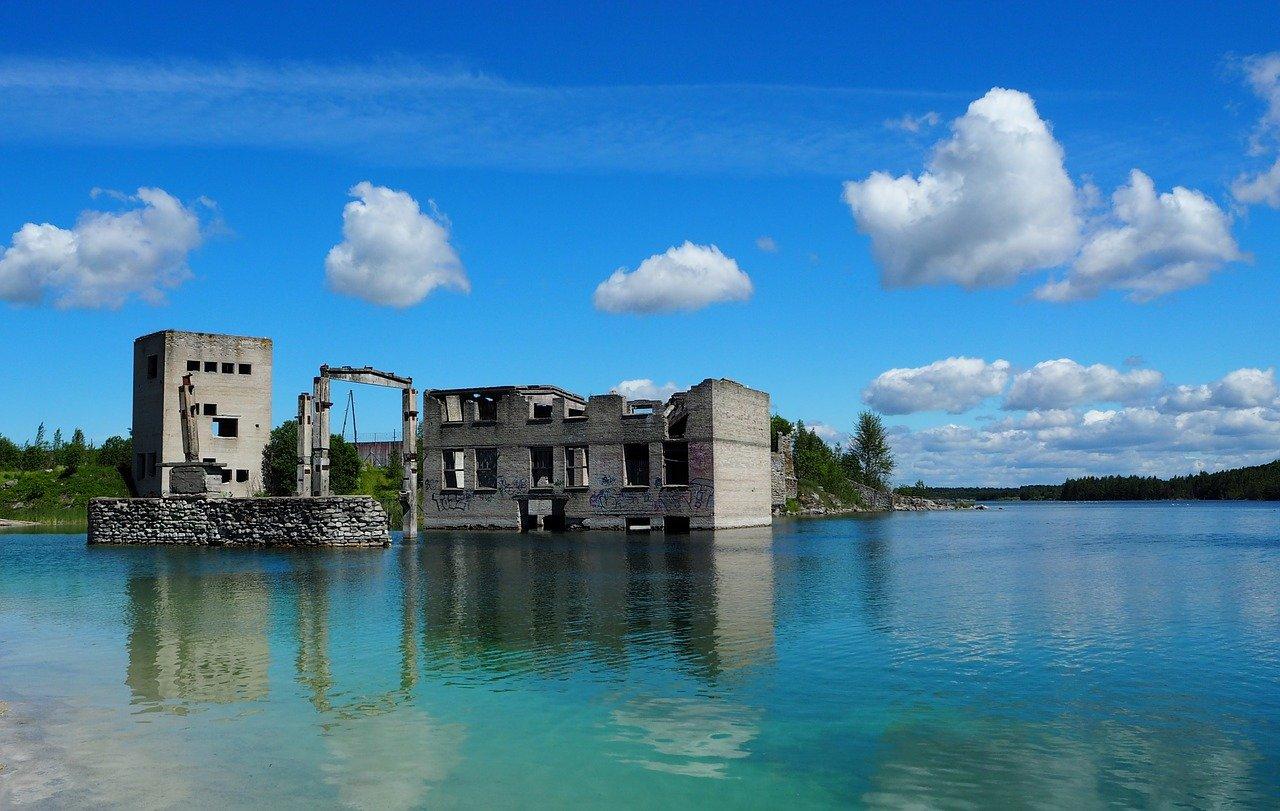 The history of these places begins in 1938, when the authorities of the Republic of Estonia began to mine here a natural stone known as Vasalemma marble.

They used the labor of prisoners from the Murru prison, who mined stone on the spot, finished it, made steps for the stairs and immediately polished them. In the Soviet years, crushed stone was also mined here. After 1991, the work of the quarry was stopped. Because of this, the local pumping station stopped pumping the incoming groundwater. The quarry was flooded in just a few days. Equipment and barracks for prisoners are now under water. 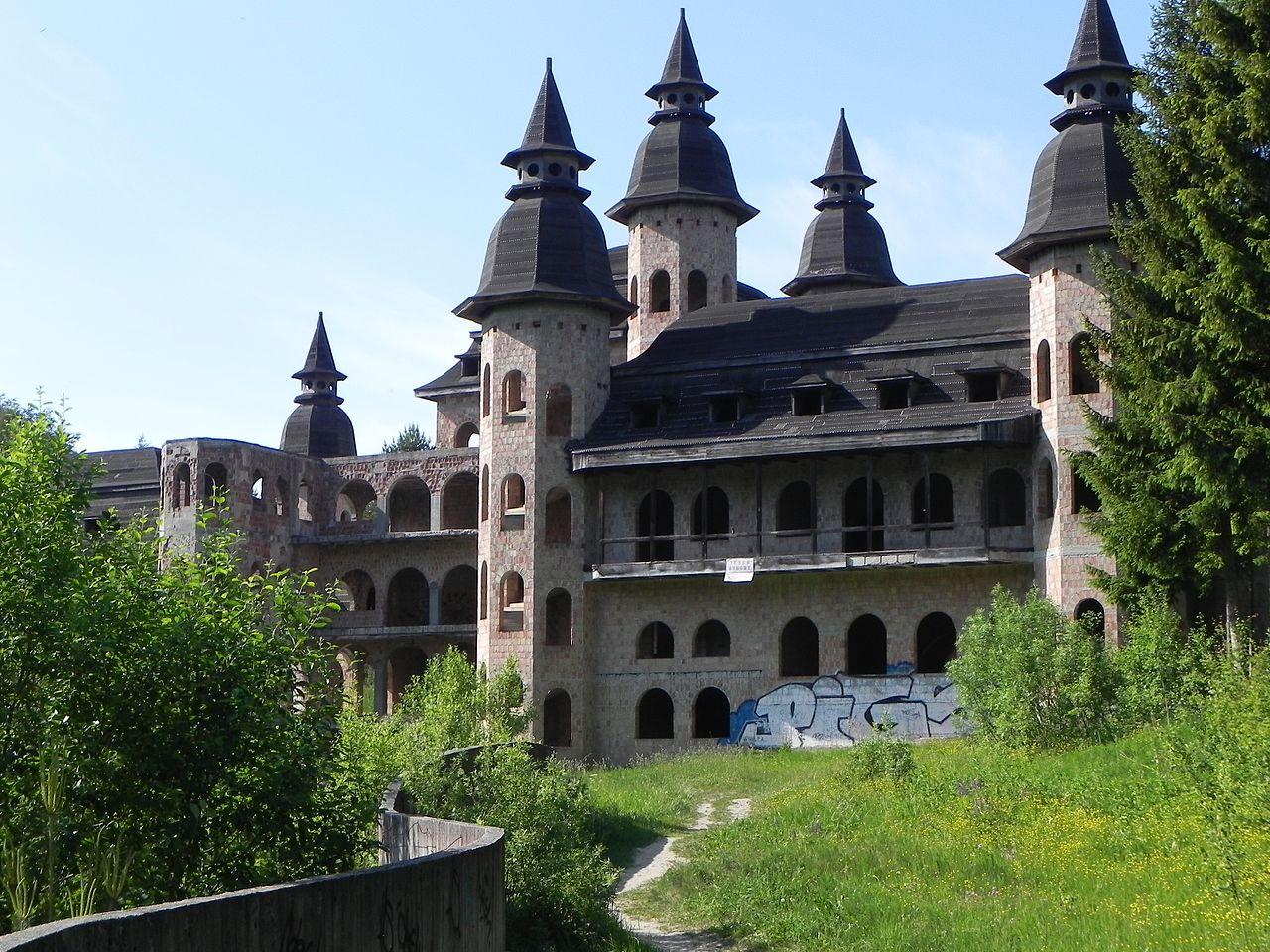 Łapalice is a small village in northern Poland, where no more than a thousand people live today. An ordinary village is famous for the most unusual castle in Europe.

It may seem from a distance that this architectural monument has survived to this day since the Middle Ages. However, it is not so old. The construction of the castle began in the 1980s on the initiative of the architect Piotr Kaźmierczak, to whom this long-term construction belongs. The main problem was the lack of a building permit and a lack of funds.

In 2013, the authorities banned the continuation of work and ordered the dismantling of the structure, but the owner managed to postpone the implementation of their decision. Until the castle was demolished, tourists rushed to inspect this "masterpiece of architectural thought". The building has an area of ​​5000 m2. 12 towers, a couple of dozen rooms, a swimming pool and several halls. It is forbidden to enter here (private territory), but this stops few people. 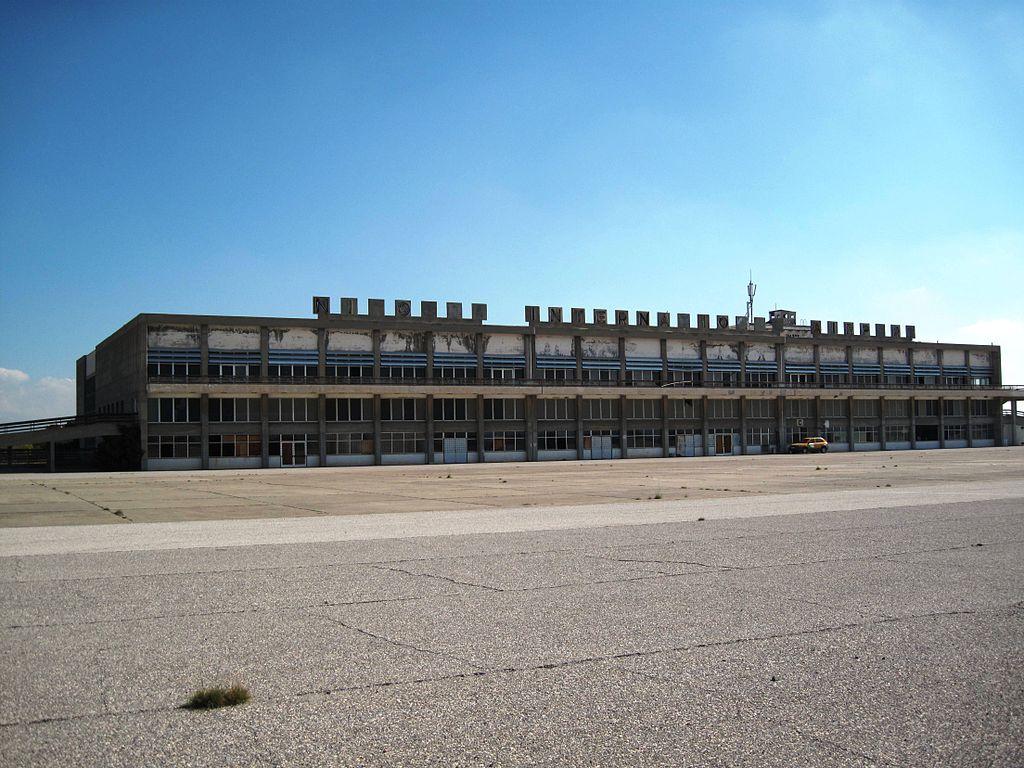 In the 1930s, the British erected a military airfield 8 km west of Nicosia for the needs of the Royal Air Force.

Since 1948, Middle East Airlines and the Egyptian MisrAir airline began to fly here regularly, which, however, used the airfield only for their trade flights. The first passenger terminal was built in 1949. In 1966, the RAF completely ceased their activity at the airport, transferring it to the Republic of Cyprus for the needs of civil aviation. Moreover, the UK has committed £500,000 to modernize and expand the old terminal, which was opened after renovation by President Makarios III in 1968. The airport could serve 800 passengers and 11 aircraft.

On July 17, 1974, the Greek military flew here, who supported the putsch against President Makarios, and on July 20, Turkish aircraft began to bomb the airport infrastructure. As a result of the Turkish invasion, the airport occured to be in territory controlled by the Turkish army.

Although in 1975 the Turkish Cypriot administration proposed to President Makarios to reopen the airport for international flights and manage it jointly, he refused. Control over the airport was transferred to the UN peacekeeping force.

The airport is now abandoned and is slowly being destroyed. By the way, some believe that the Ercan airport is the former international airport of Nicosia. This is true, Ercan was built on the site of the British air base in Timbou. 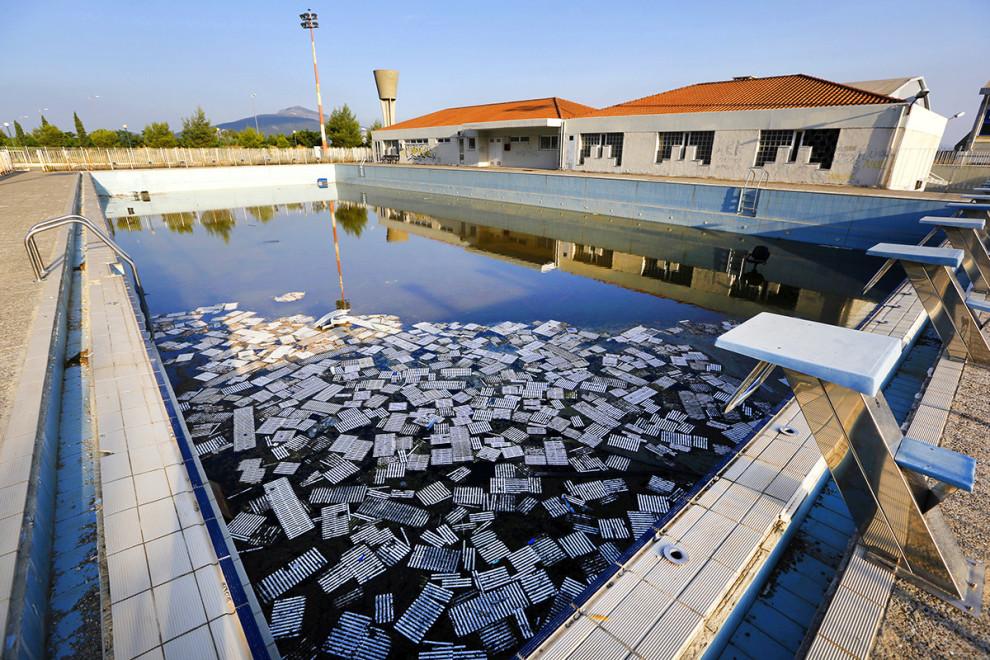 The fate of the sports infrastructure after large-scale events like the Olympics is usually sad: graffiti painted walls, neglected stadiums and swimming pools that have turned into ponds with frogs replace the atmosphere of a sports festival.

One example of this is the fate of the Olympic Village in Athens. In 2006, two years after the 2004 Olympics, some of the buildings were transferred to the use of the Workers' Housing Organisation, which sponsored the construction, but residents eventually settled only a small part of the entire area. Most of the buildings and objects were left without use, they began to be subject to devastation and destruction.

In 2008, the building of the Olympic canteen collapsed.

The administration building, where the Ministry of Labor was supposed to enter, became the subject of legal proceedings, so the department could not use it. The hospital, one of the largest in Attica, has closed most of its departments, forcing local residents to travel to other areas. 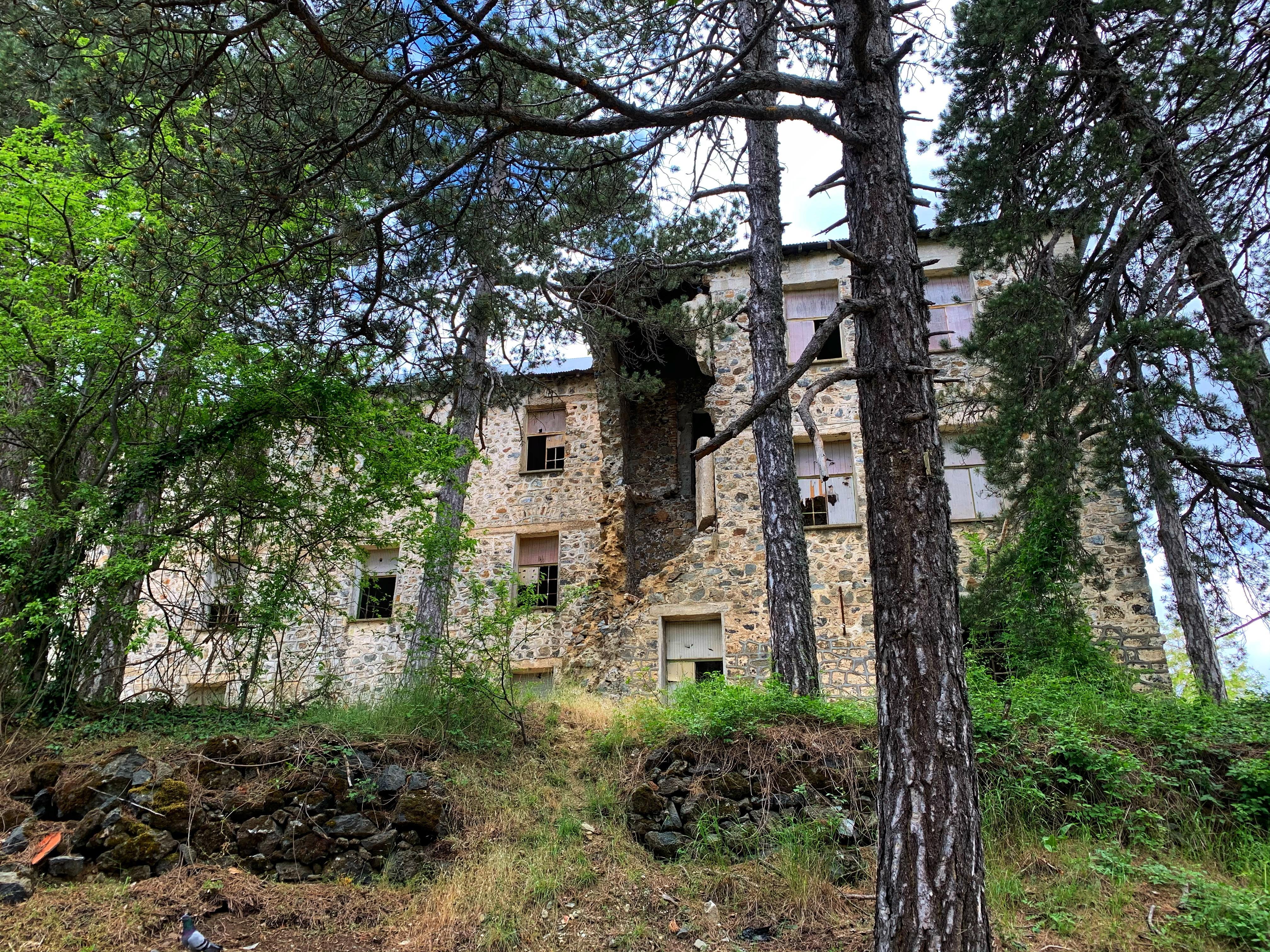 The famous Cypriot hotel (the merits of which, however, are greatly exaggerated) was built in 1930 from local gray stone, which initially gave it a gloomy look.

Although the Cypriot press at that time exuded abundant praise for the new hotel, calling it "the abode of the gods", there is a story that the popularity of the hotel was primarily due to the surrounding landscape, and not the high level of service or infrastructure. In particular, Berengaria's own pool appeared only in the 1960s.

It should not be surprising that this gloomy building in the middle of the forest soon after its closure acquired the fame of a place inhabited by ghosts. The hotel requires colossal investments, so so far all attempts to bring it back to life have been unsuccessful. Although, they say that the new owner has grandiose plans for the Berengaria. 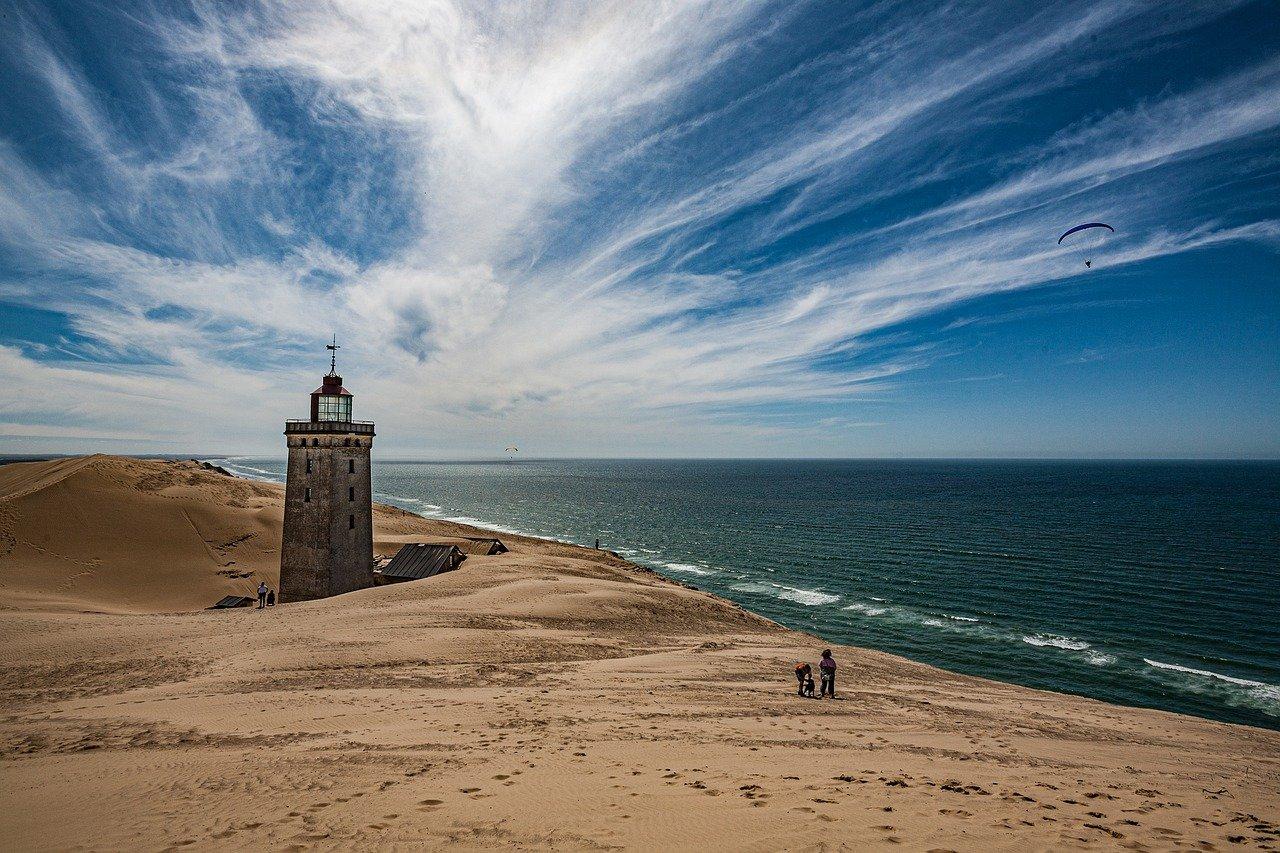 On the northern coast of Denmark, near the commune of Hjørring, a gas-powered lighthouse was built in 1900.

However, the builders did not take into account two features of the coast - constant soil erosion, due to which the sea moves inland about 1.5 meters per year, destroying the coast, and sandstorms that literally fill everything around with sand.

In 1968, the lighthouse was closed, but continued to work as a museum, but by 2002 it was so heavily covered with sand that it was no longer possible to get there. In 2009, under the pressure of sand, nearby outbuildings collapsed. The 23-meter lighthouse, according to the calculations of the engineers, would have stood until 2023, if in 2019 it had not been transported 70 meters deep into the peninsula. Thanks to this, it will be possible to preserve it until 2060, when it will again be buried under the sand dunes.

If you are looking for interesting housing options in Cyprus, then visit the DOM. Here you will find residential and commercial properties for every taste and budget.