How Are Projects Of Largest Marinas In Cyprus Progressing?

The Cyprus coastline is home to many small ports, docks, piers and fishing boats.

However, the real pearls here are the large marinas, which are difficult to pass by without stopping to admire them.

It is worth noting that the government of Cyprus has set the task of building large-scale marinas in every city and town of the country - the implementation of these development projects has significant social and economic benefits for each city and town, and contributes to the creation of jobs and the corresponding infrastructure for the development of sea tourism.

Today there are 5 large scale marinas in the coastal cities of Cyprus. Some of them have already been put into operation, and some are still at the stage of implementation and even development. Stakeholders are exploring and trying to adapt to new COVID life, looking for new opportunities created by restarting the economy.

So, among the major ports of the island are: 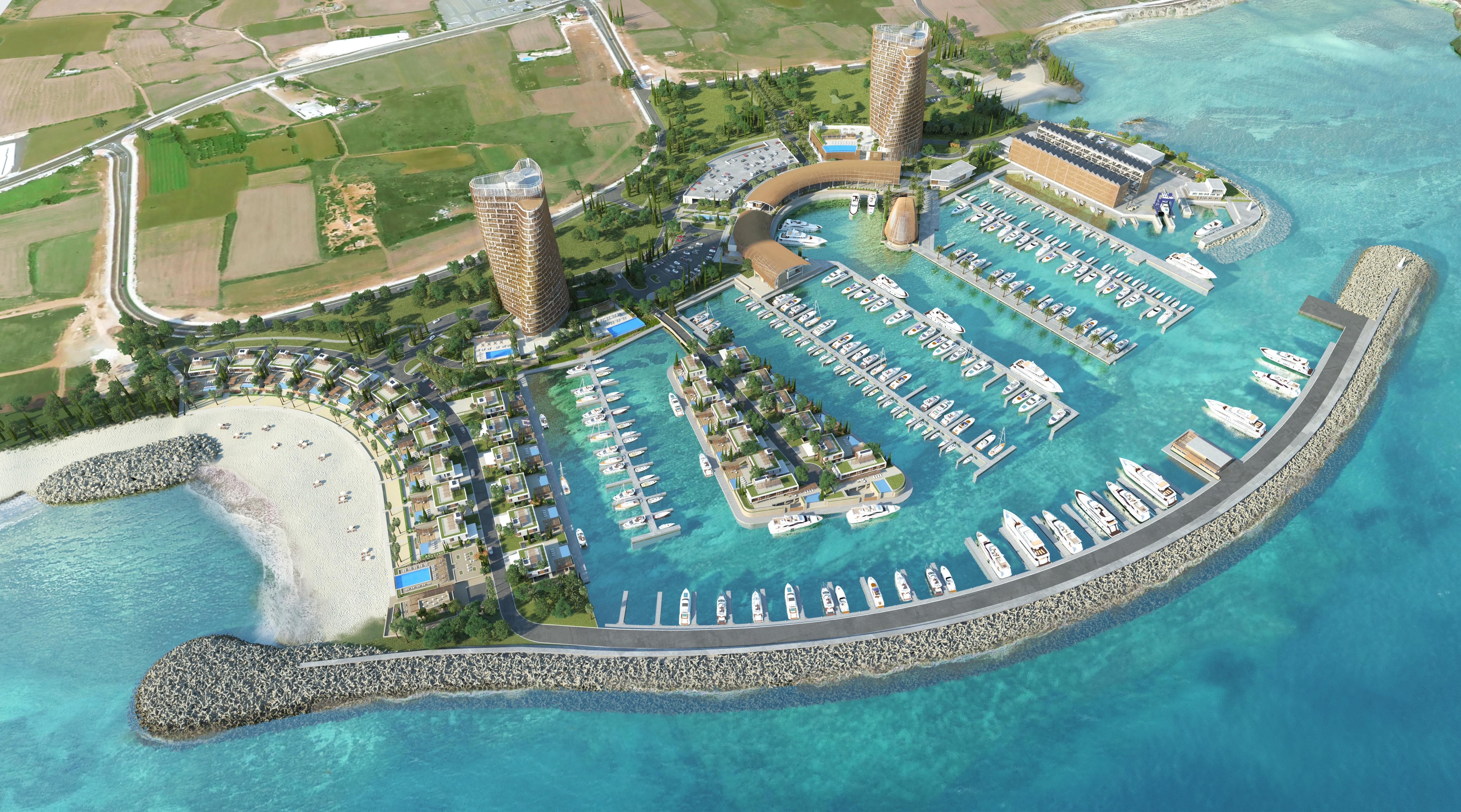 Ayia Napa's new marina is in the final stages of construction. The shopping area has been completed, the first Coffee Berry has already opened, and the Riva Beachouse and Alfamega supermarket are expected to open next month.

The parking lot for more than 500 spaces will be commissioned by the end of July, and the first owners will receive the keys to their mansions this summer. By the way, about 20% of the villas have already been sold. Sales are expected to increase shortly as investors from the Middle East, North Africa, Russia and Mainland Europe have begun to show renewed interest in the project.

As for the two towers included in the master plan, the first one is slated for completion by the end of 2023 (more than 90% of the apartments there are already sold out). The feasibility of building the western tower is regularly assessed by the experts of the developer company.

According to the general director of the project, Stavros Karamondanis, in the context of the coronavirus pandemic, the management of the marina is actively using opportunities to attract customers. Primarily by means of providing incentives for boat owners. For example, such as reducing VAT on fuel, spare parts, consumables, etc.

Last year, the focus was on attracting luxury yacht owners from neighboring countries, mainly from Lebanon, Israel, Egypt and Italy. However, even though we received over 200 mooring requests, the booking was heavily influenced by the pandemic and the classification of the aforementioned countries in the red category. Today, about 80 vessels are moored in our harbor, and the interest is especially great, both inside Cyprus and from neighboring countries such as Lebanon, Israel and Egypt, - said Karamondanis.

Upon completion of the project, the marina is expected to provide docking capacity for 400 boats on the water, Dry Stack services for 160 yachts up to 10 meters in length, and service areas for 80 additional boats. 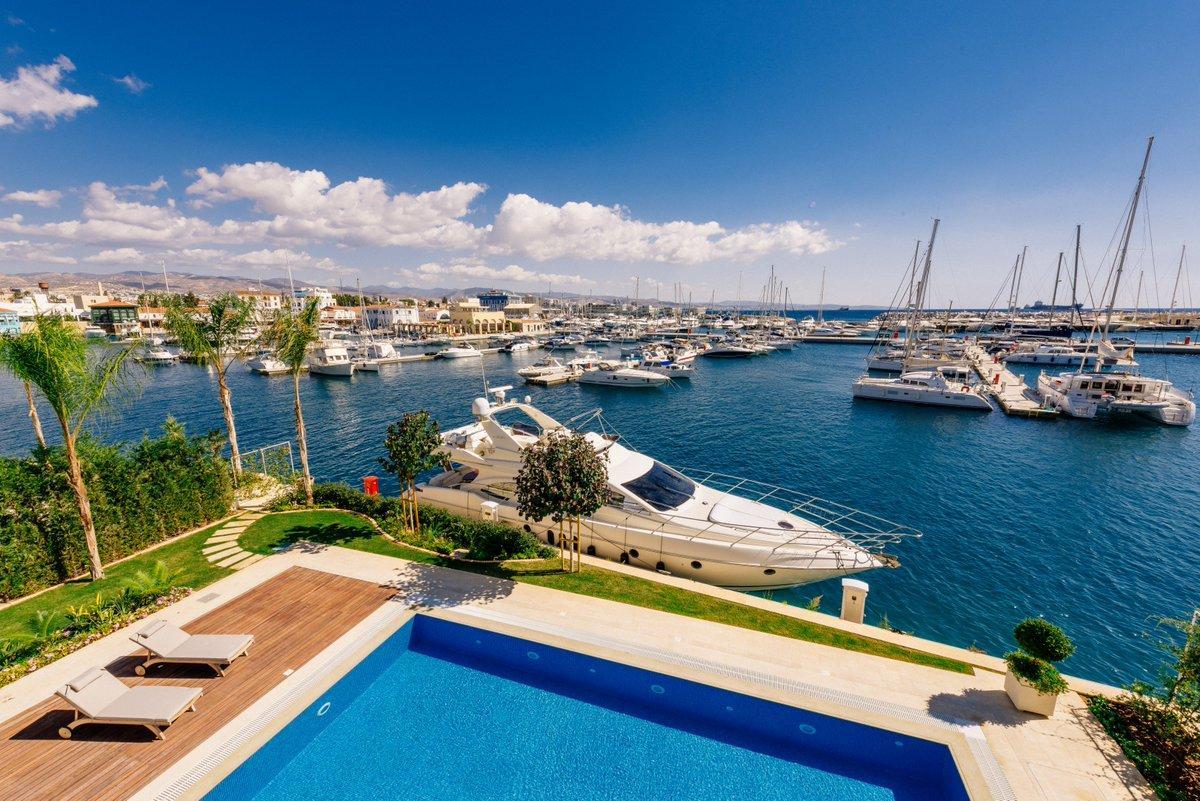 In June 2021, the Limassol Marina project was fully completed and commissioned. Although, it should be noted that it has been officially operating since June 2014, and the marina began servicing the first boats even earlier - in 2013.

Marina Limassol is one of the most important infrastructure projects ever built in Cyprus. The marina covers an area of ​​174,000 m2 and the construction cost is estimated at €357 million. There are 700 yachts in the Marina. More than 500 of them are in operation now.

Over the seven years of operation of the marina, more than 7000 yachts have arrived, of which more than 275 are superyachts up to 111 meters long. The berth owners come mainly from neighboring countries such as Israel, Lebanon, Turkey and Greece, while several boats have arrived on the island recently, mainly from countries outside the EU such as America, Russia, the UK and the Middle East - said the CEO of Limassol Marina Ltd Nikiforos Pampakas. 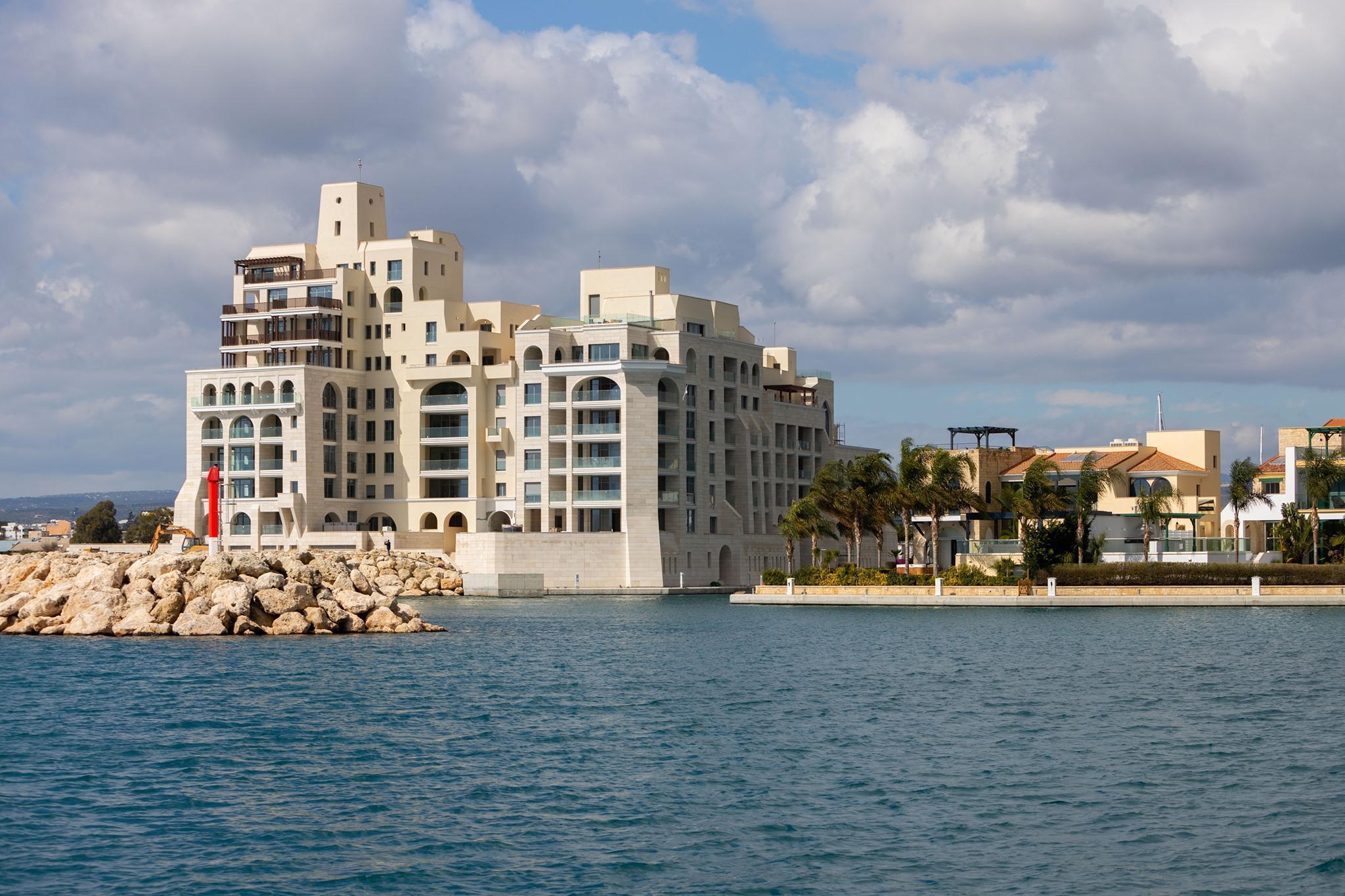 As for the residential part of the marina, it should be noted that the last phase of the marina project was recently completed, which included the construction of the Castle Residences complex.

The elite complex is designed for more than 60 luxury apartments with two, three, four bedrooms, ranging from 114 to 248 m2. In addition, Castle Residences has duplexes and penthouses with private rooftop pools. All apartments have covered and / or open terraces. The apartments are located within walking distance from luxury boutiques, shops, restaurants and bars, recreation areas and cultural sites. It should be noted that 90% of the apartments in Castle Residences are sold.

Of the 74 villas built for sale in the Island Villas complex, only 4 are currently for sale. They have a private dock for boats up to 20 meters in length. 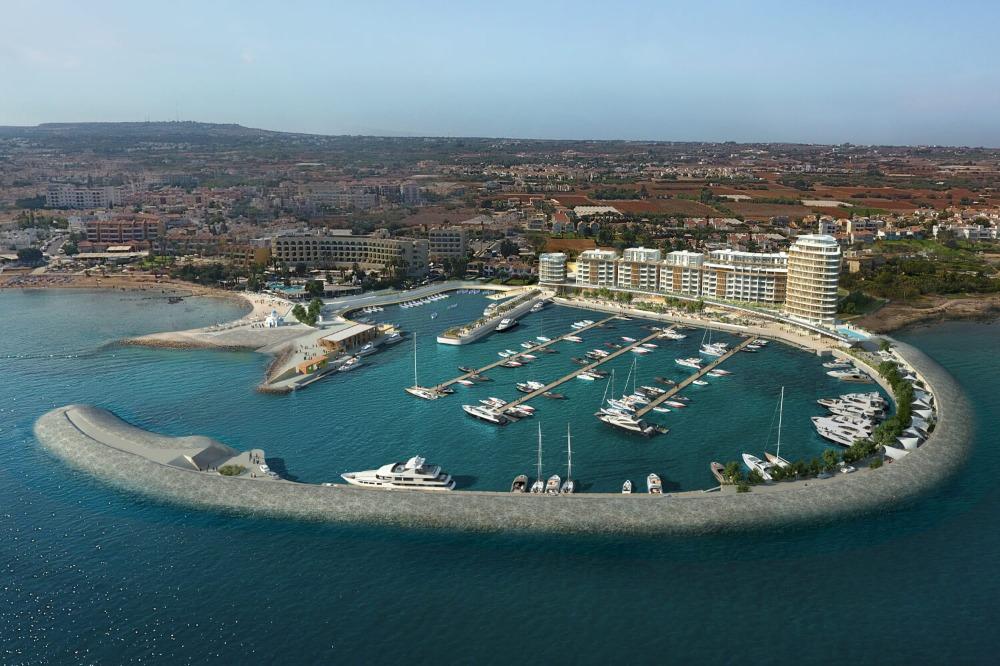 The ambitious Paralimni Marina project with a budget of around €110 million has already started. It will be located in the area of ​​Agios Nicholas. The marina will be able to accommodate about 300 yachts. According to the project, cafes, restaurants and shops will appear in the port - a total of 18 retail outlets, as well as residential buildings and villas.

In addition to housing and shops, government agencies will also be located here: the port police, customs, migration service, medical and veterinary services, and an anti-narcotics department. The project cost is estimated at €110,000,000. 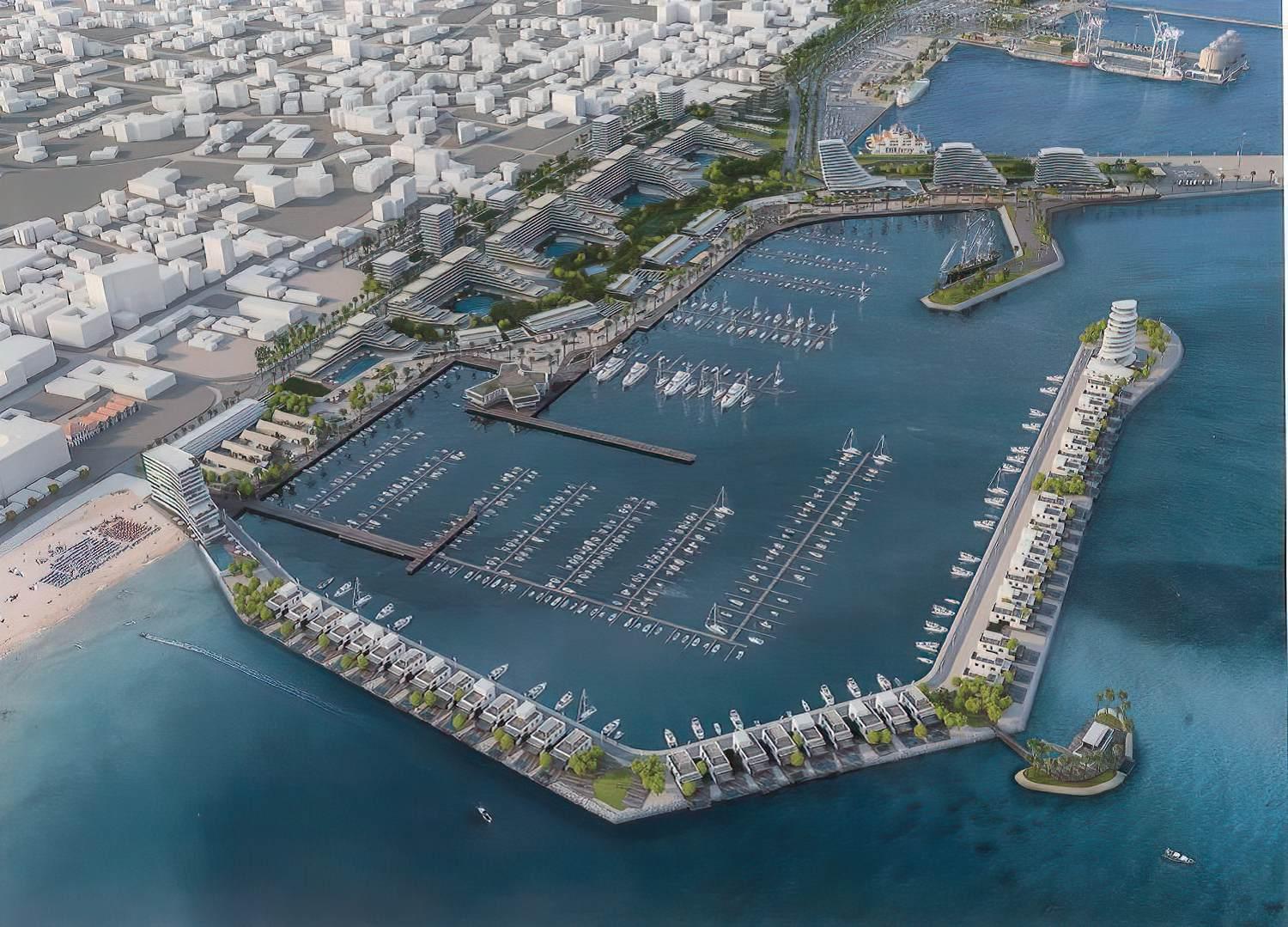 The Kition Ocean Holdings consortium, which has taken over the combined development of the city's port and marina, is frantically planning the construction of the project in an office that it has already set up inside the port, '' said EBE Larnaca Director George Psaras.

At a later stage, the recruitment of the remaining employees will begin with the goal of employing 60-70 people by the end of 2021 at Kition Ocean Holdings.

According to the project, the Marina, with an area of ​​about 500,000 m2, will be expanded to accommodate up to 700 yachts up to 150 meters in length. On the territory of the marina, there will be restaurants, cafes and bars, a green area, playgrounds, as well as commercial and office buildings, a hotel and villas.

Port work includes, among others, the expansion, modernization and construction of a new cruise terminal. An institute with the faculties of medicine, hotel business and maritime business will open in the marina. Investments in the project will amount to about €1.2 billion. 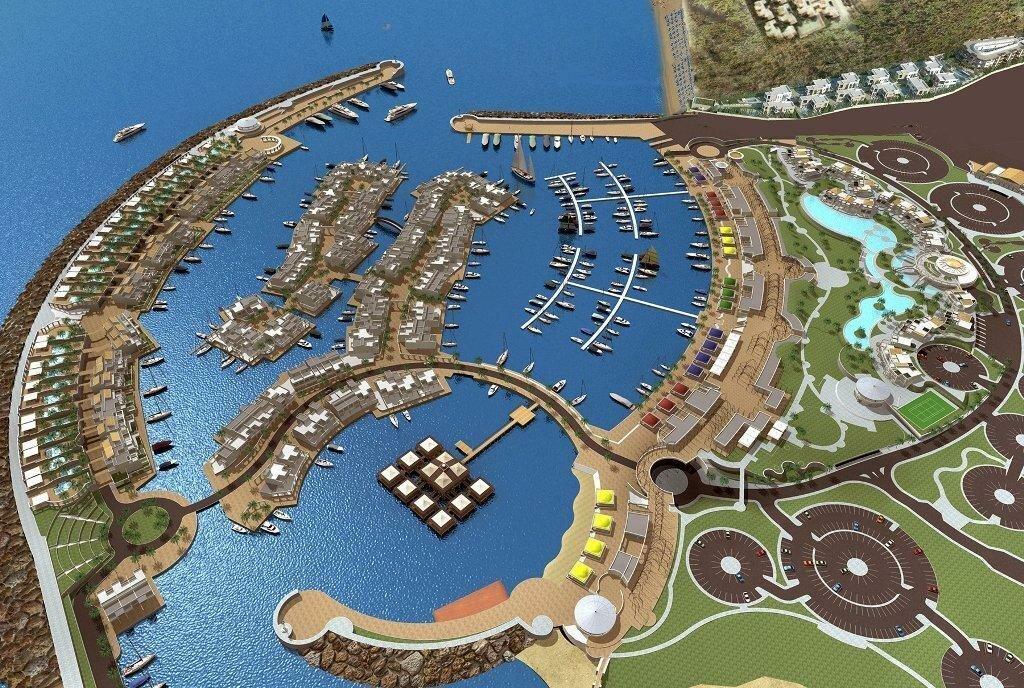 The project for the construction of a marina in Paphos has been trying to implement for over 10 years. The construction tender was first announced in 2007. In 2008, the Cybarco-Pandora consortium won the victory, the consortium included one of the largest developers on the island, Leptos Group.

However, two other bidders - Pafilia and the Poseidon consortium - challenged the decision of the tender committee. Litigation began and the project was frozen.

In December 2015, the Supreme Court of the Republic of Cyprus ruled to award the victory to the Poseidon consortium, which includes another major Cypriot developer, Aristo Developers. He was ready to build the Paphos Marina for 215 million euros. However, the banks in Cyprus refused to give the company a loan for construction for the missing amount of €104 million, so the right to implement the project was transferred to the third participant in the tender - Pafilia.

Soon the third developer dropped out of the race. After that, the government of the Republic of Cyprus was forced to announce a new tender. However, there were not so many people willing to pour funds into the project.

According to the project, the Marina of Paphos with an area of ​​155 thousand m2 should be located in the bay of Potima (between Peyia and Kissonerga). On its territory there are parking spaces for 1,000 yachts. The total area of ​​commercial and residential real estate in the Marina will amount to 42 thousand m2, the implementation period will be three years.

The original cruise ship service proposal was intended for the harbor of Kato Paphos, but it was then proposed to merge the facility with the proposed marina in Kissonerga, as the Department of Antiquities stated that the construction would have a negative impact on the archaeological environment in the area.

More information on new projects can be found on the DOM Real Estate. The website also has a large number of Cyprus properties, both residential and commercial. Choose and contact professionals who will help you make the right choice!