Cyprus is famous for its long history. Many archaeological parks with ruins of varying degrees of preservation attracted tens of thousands of tourists and local residents before the pandemic.

Today, there are much fewer visitors to them due to the temporary tourism crisis, but the inhabitants of the island who are interested in history periodically stop by to admire historical monuments.

However, it is difficult to visit archaeological parks without preliminary preparation. All the ruins, no matter how old they are, are similar to each other, as not everyone has enough imagination to understand how people lived in this particular place a couple of thousand years ago. 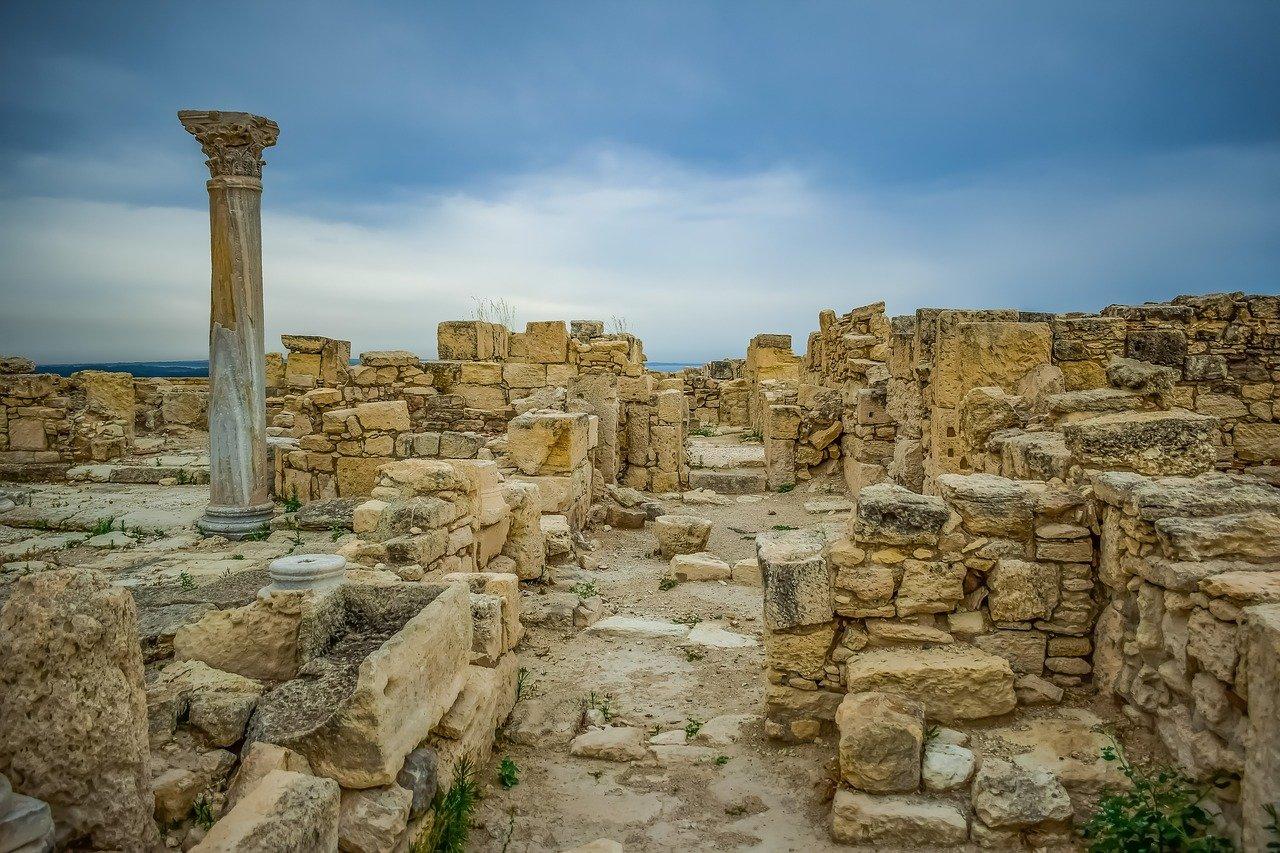 To fill this gap, let's try to bring the abandoned ancient cities back to life, at least in our imagination.

How was the antique villa arranged? Why was a square opening made in the ceiling of the main hall? Could everyone afford to have a mosaic on the floor? How did the home of a wealthy Cypriot become a public space? All this in our today's material.

Since all the Cypriot examples that we will consider in this article were built in the Roman era, this is a good reason to learn what types of real estate existed in ancient Rome and how these buildings were arranged, what rooms were inside and what they served for.

All Roman residential buildings were divided into two large groups: 'domus' and 'insula'.

'Domus' (a word, as it is not difficult to guess, is related to the word DOM) was called a private house for one family. If the 'domus' was located outside the city, then it was called a villa. 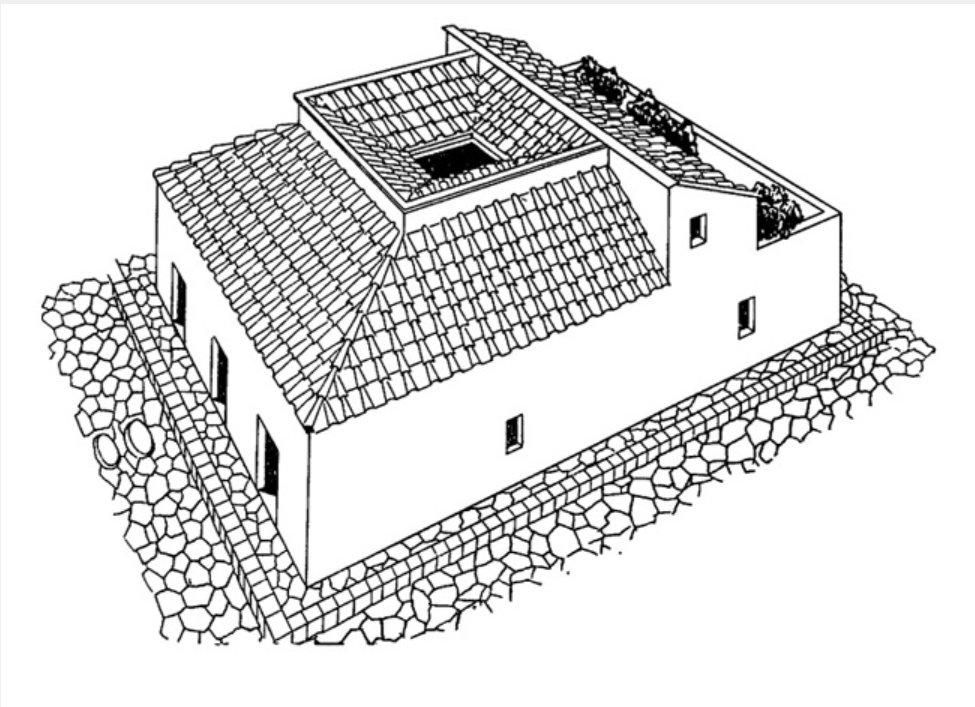 Usually 'domus' and villas were one-story.

These rooms usually housed 'small and medium-sized businesses': the owner of the 'domus' rented them out for private workshops, catering, shops or other socially useful facilities. By the way, it can be an interesting idea for modern developers to combine a private residential building and public premises under one roof, from which property owners could receive passive income! 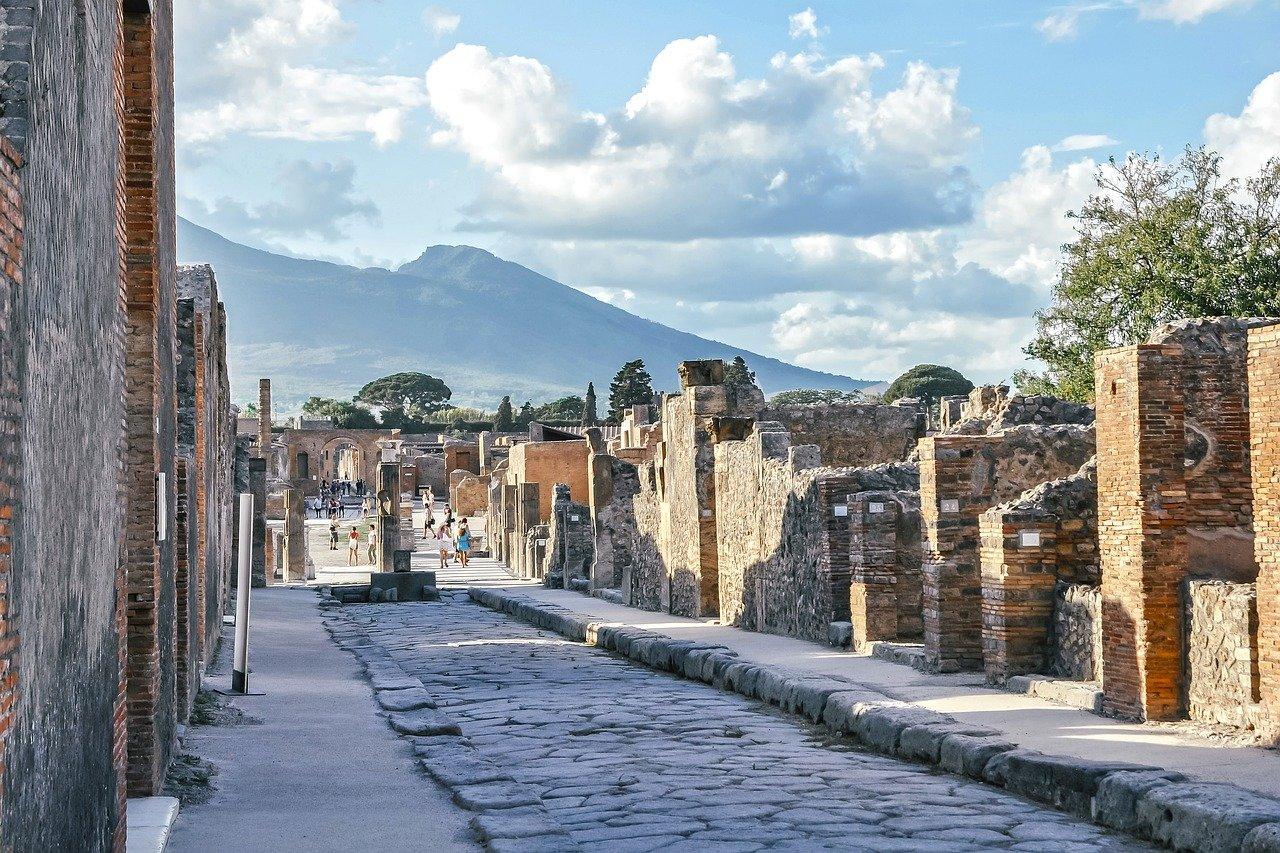 Street of a typical Roman city.

Now it can seem strange, but the roof over the 'atrium' had a slope inward, not outward.

In the middle there was a square opening ('compluvium'), which simultaneously served as a light well (there were not many windows in the Roman house, they were narrow and not useful) and a water supply system.

During the rain, the water poured down the roof into the 'compluvium', and from there fell into a reservoir specially arranged below, which was called the 'impluvium'. The rainwater collected in this way was used for domestic needs, although it is known that rich houses were also connected to the water supply (water came to them from aqueducts).

Inside, around the 'atrium', there were also various small rooms. On the opposite side of the entrance was usually the office of the head of the family ('tablinum'), where he kept business documents, money, family archives, images of ancestors, etc. From the 'atrium' the office could be fenced off by sliding wooden panels or a curtain. Another room that could be accessed from the 'atrium' was the 'triclinium' (the family dining room).

If the atrium served to receive guests, then the second part of the 'domus', duplicating the first, was usually used exclusively for family needs.

There was also a large hall with a square opening in the ceiling and a water reservoir, only this hall was called 'peristyle' or 'cavaedium', usually the roof was supported by a row of columns. The pool in the middle of the peristyle was called 'piscina', in rich houses in this pool, which had an exclusively decorative function, there was a fountain. Here, a small garden could be arranged, the walls were painted with frescoes, and the floor was laid out with mosaics. 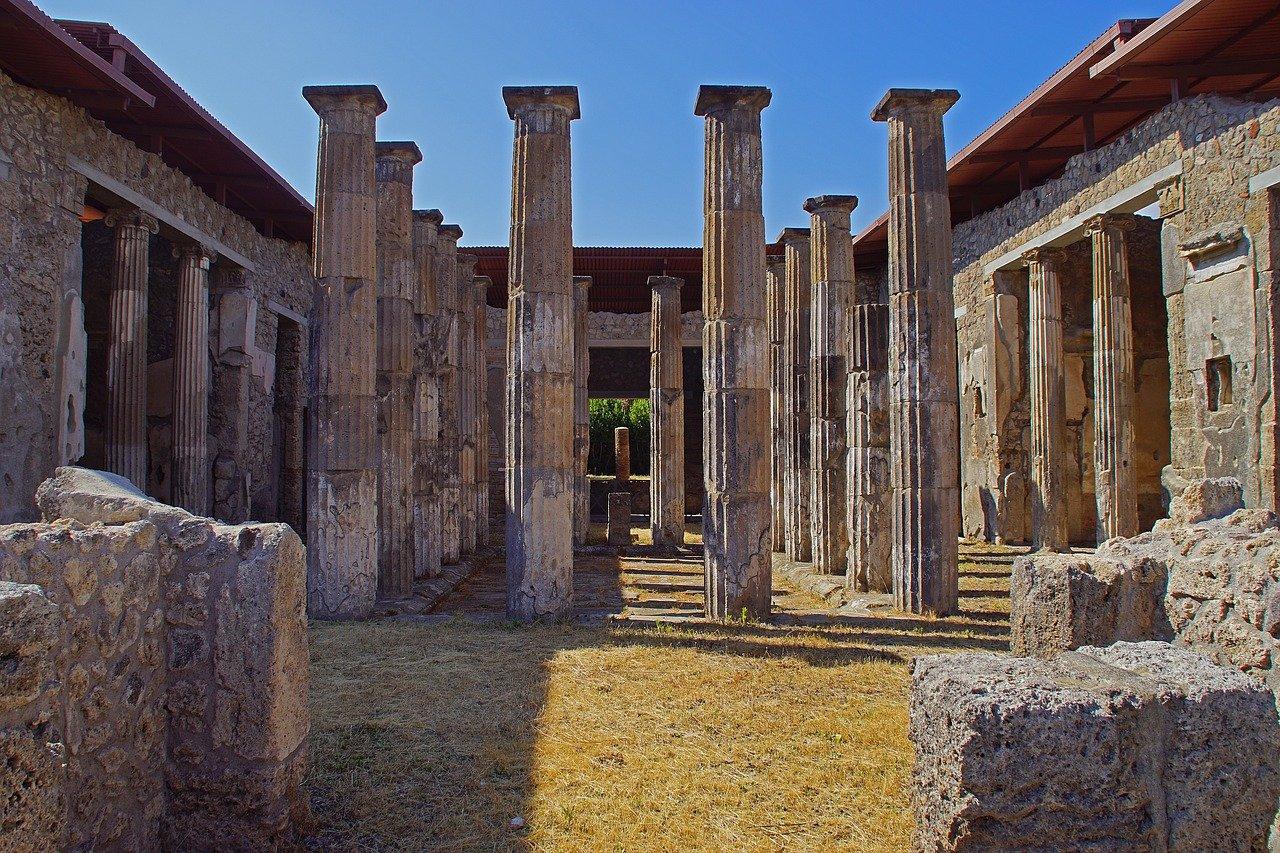 There were also small rooms around the peristyle, which could serve as bedrooms ('cubiculum'), living rooms ('oecus'), storerooms, etc.

This two-part structure of the house has almost always been preserved, although the number and location of the rooms may vary.

The second type of Roman real estate was 'insula' - an apartment building with several floors. The height of the "insulae" was legally limited at first to 20 meters, and later to 17 meters. The ground floor was considered more prestigious, since there were amenities in the form of sewerage and water supply. The first and next floors were usually rented by the poor residents. To get into their home, they had to climb the stairs and walk along the corridor or balcony (the entrance to their apartments could be in the back side of the building, and not in the front one). 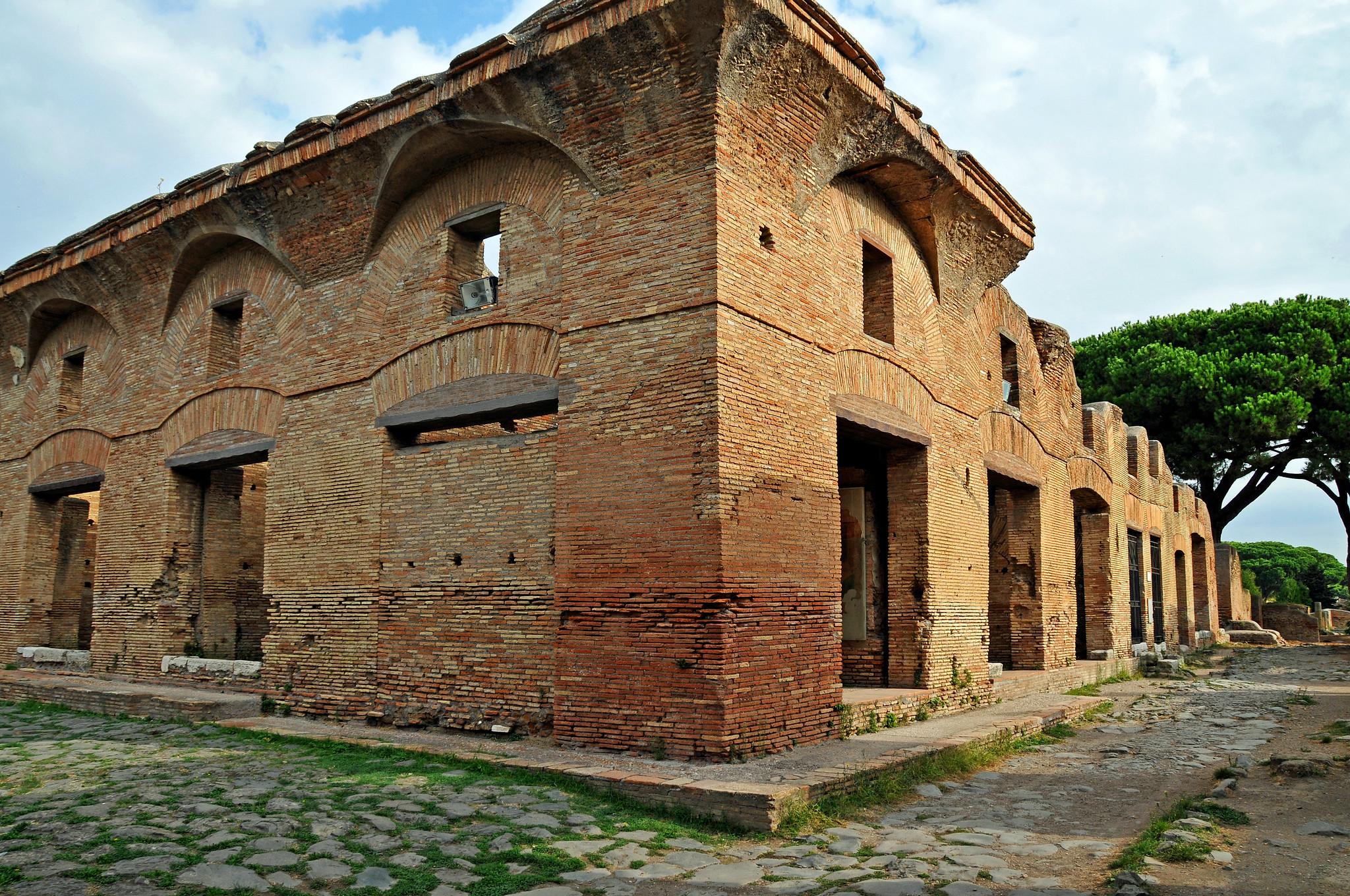 'Insula' in the Roman city of Ostia (photo by Dennis Jarvis).

Just like apartment buildings today, "insulae" often had premises on the ground floor for various kinds of workshops, taverns and other establishments.

The family could rebuild their 'domus' into an 'insula' and rent out the premises. It is known from sources that due to low-quality materials and violations of construction rules, the upper floors of Roman apartment buildings often collapsed. "Insulae" were a characteristic feature of large Roman cities, and in provinces such as Cyprus they were hardly built. 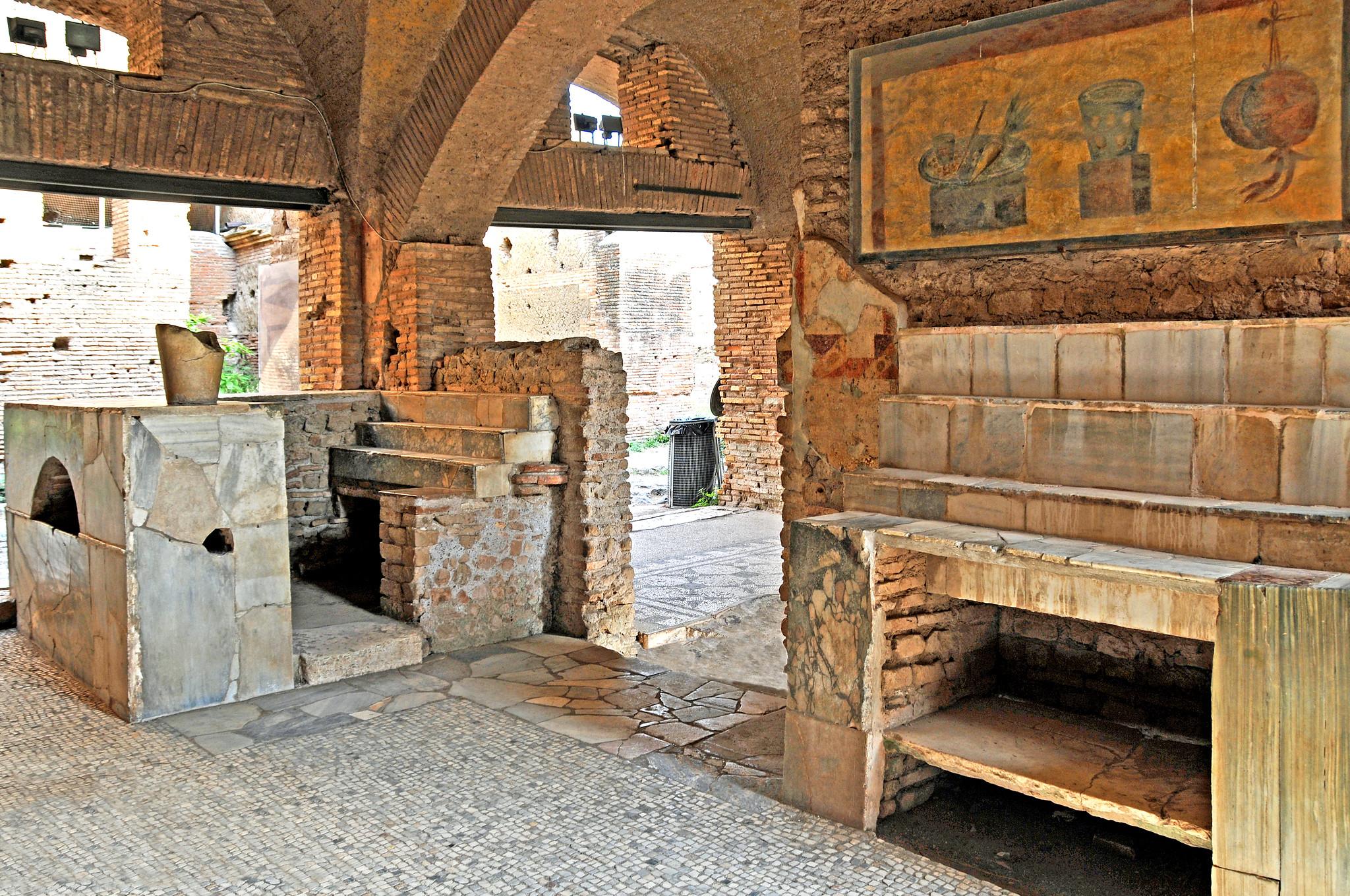 It often turned out in real life that many times rebuilt and built up on 'domus', large, even by today's standards, residential complexes of "insulae" looked like huge hives, where hundreds of people of various social classes lived.

Emperor Claudius, somehow walking through the palace, was surprised to see a huge crowd, which was making noise and discussing something. It turned out that the audience was listening to the historian Servilius Concanus, who was reading his new work to them.

Unauthorized events in the palace did not shock the emperor, since it was normal for Rome. Often the owner could not know what was happening in one of the premises of their house, 'who all these people' who gathered there, and what they were doing.

Villa of Eustolius (located near the entrance to the archaeological park of Curium, to the left of the theater) was built in the late 4th - early 5th century AD.

The villa, according to the classical rules of Roman economy, had two large halls: the 'atrium' and the 'peristyle' - and a total of 35 rooms for different purposes. It's hard to imagine today, but the building was really big.

Its history is known thanks to the inscriptions laid out in mosaics. The owner of the villa, a certain Eustolius of Curium, visiting his homeland (Kourion), saw how poorly his fellow citizens live, and decided to turn his villa into premises for public use.

On the north side, he constructed baths in accordance with all the rules of Roman architecture (we will definitely tell you about how Roman baths were built another time), decorated the rooms of the house with mosaics with Christian symbols and allowed the inhabitants of Curium to spend time here. It turned out to be something like an accessible public space with an important social function. 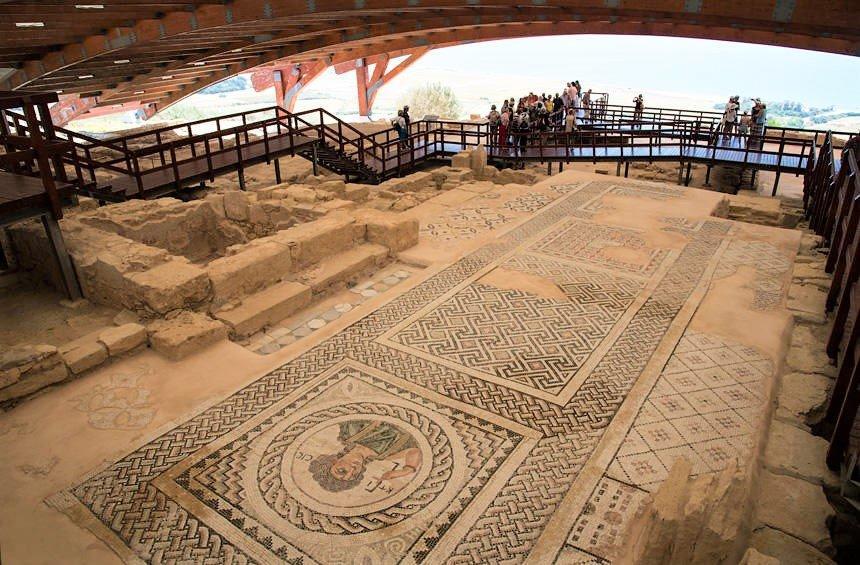 Kourion's other two relatively well-preserved villas were much more modest in size.

The so-called 'Villa of Achilles', which got its name from the mosaic depicting Achilles, Odysseus and Princess Deidamia, was a house built at the beginning of the 4th century AD, with an atrium and several rooms around the perimeter. On the north side of the hall stood columns propping up the roof, which formed a small portico. The floor of the portico was lined with the famous mosaics. This genuine work of art indicates that in this part the host was able to receive distinguished guests.

A little to the east of the 'villa of Achilles' are the remains of the so-called 'villa of the gladiators'. It got its name not because gladiators lived there, but again because of the images on the floor mosaics. Like the 'Villa of Achilles', it was a private house with an 'atrium' and premises around the perimeter. The owner, apparently, had a special passion for gladiatorial combat, which is why they ordered to lay out scenes of gladiatorial training and combat on the floor. The building was built in the 3rd century AD, but already in the next century it collapsed due to a powerful earthquake that caused enormous damage to Curium. 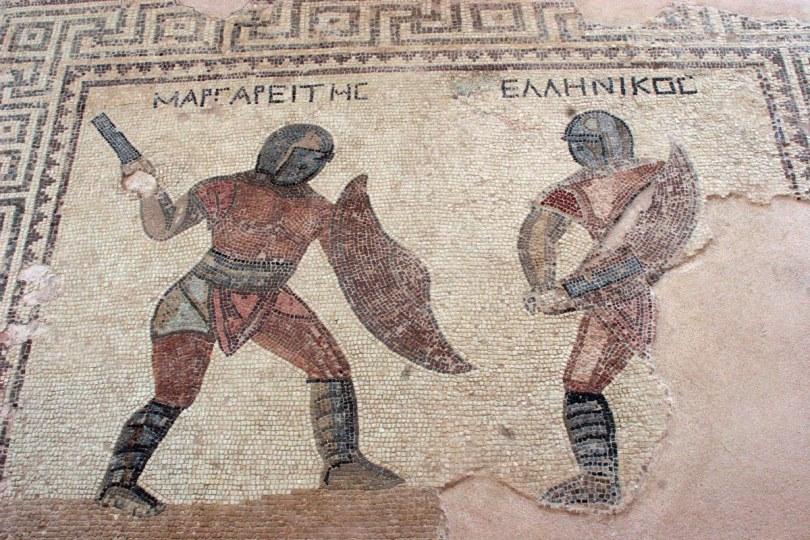 Mosaic on the floor of the 'Villa of the Gladiators' (photo by Katia Christodoulou, CNA). The names of the gladiators are signed: Margarites and Hellenicus.

The fourth villa, which we will talk about, is perhaps the worst preserved. This is the so-called 'Villa of Leda' in the archaeological park of Palepaphos (the village of Kuklia), built in the 2nd century AD.

From the once rich building, only the floor of the banquet hall ('triclinium'), decorated with mosaics, remained. There is Leda, the mother of Helene the Beautiful, who is seduced by Zeus, who has taken the form of a swan. As you know, the Romans took their food reclining on special benches. They were placed with the letter Π, which required three beds (hence the name 'triclinium', that is, 'with three beds'). In the 'domus' there could be several 'triclinia', which served as a dining room alternately or for different family members. 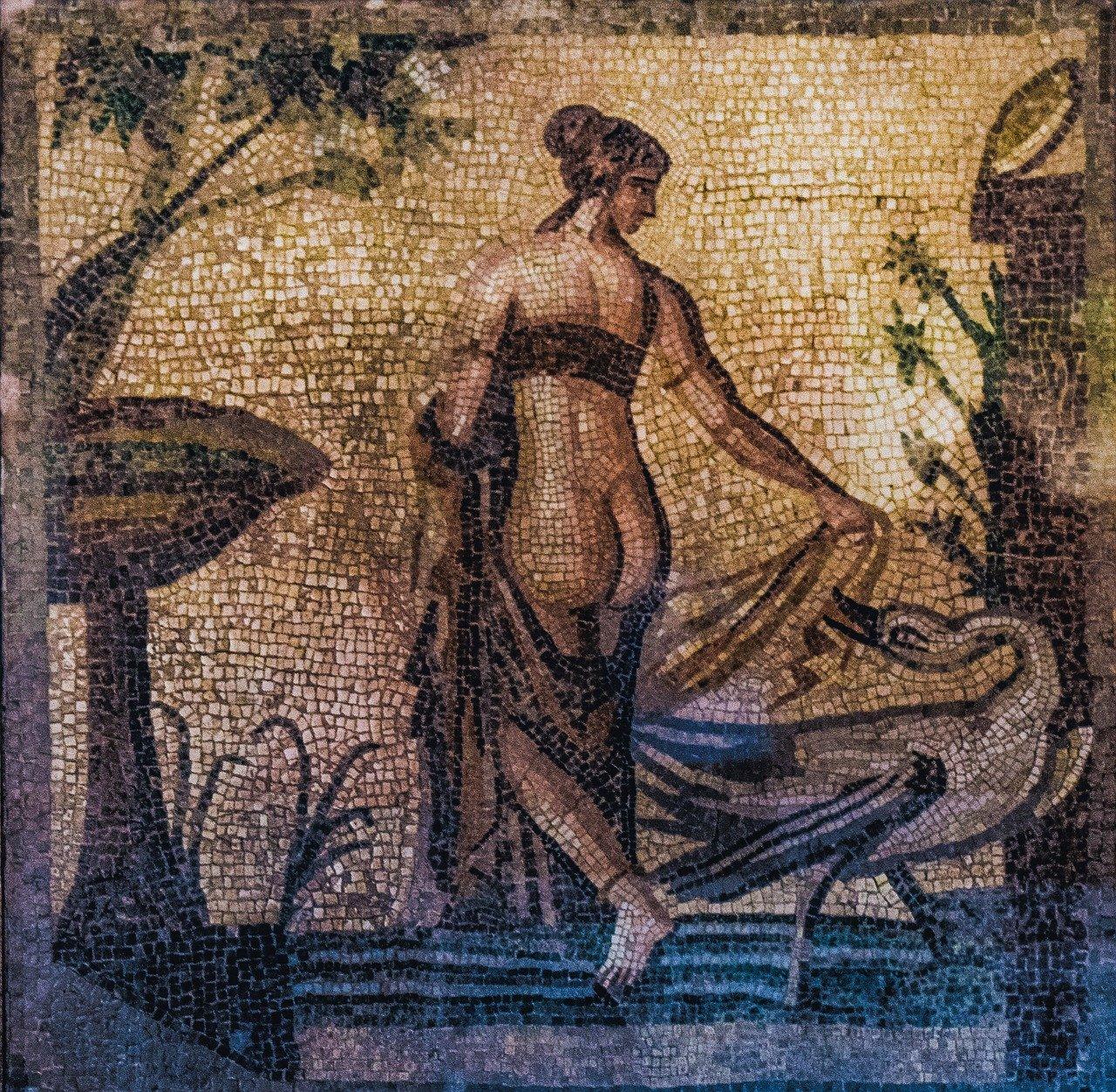 Today, private villas remain one of the most popular types of real estate in Cyprus. Although their structure is very different from the Roman ones, many modern buildings are wonderful examples from which subsequent generations will study the architecture of the island in the late 20th and early 21st centuries.

On the website dom.com.cy you will find over 15,000 offers of modern villas and houses in Cyprus. Use filters to search or ask specialists for help. You can also find useful information about real estate in Cyprus and life on the island in the DOMLiVE section.