How was a traditional Cypriot house arranged?

Going to a Cypriot village to attend a festival or to stay in a house in the mountains for the summer, we almost never pay attention to the architecture of traditional Cypriot houses. 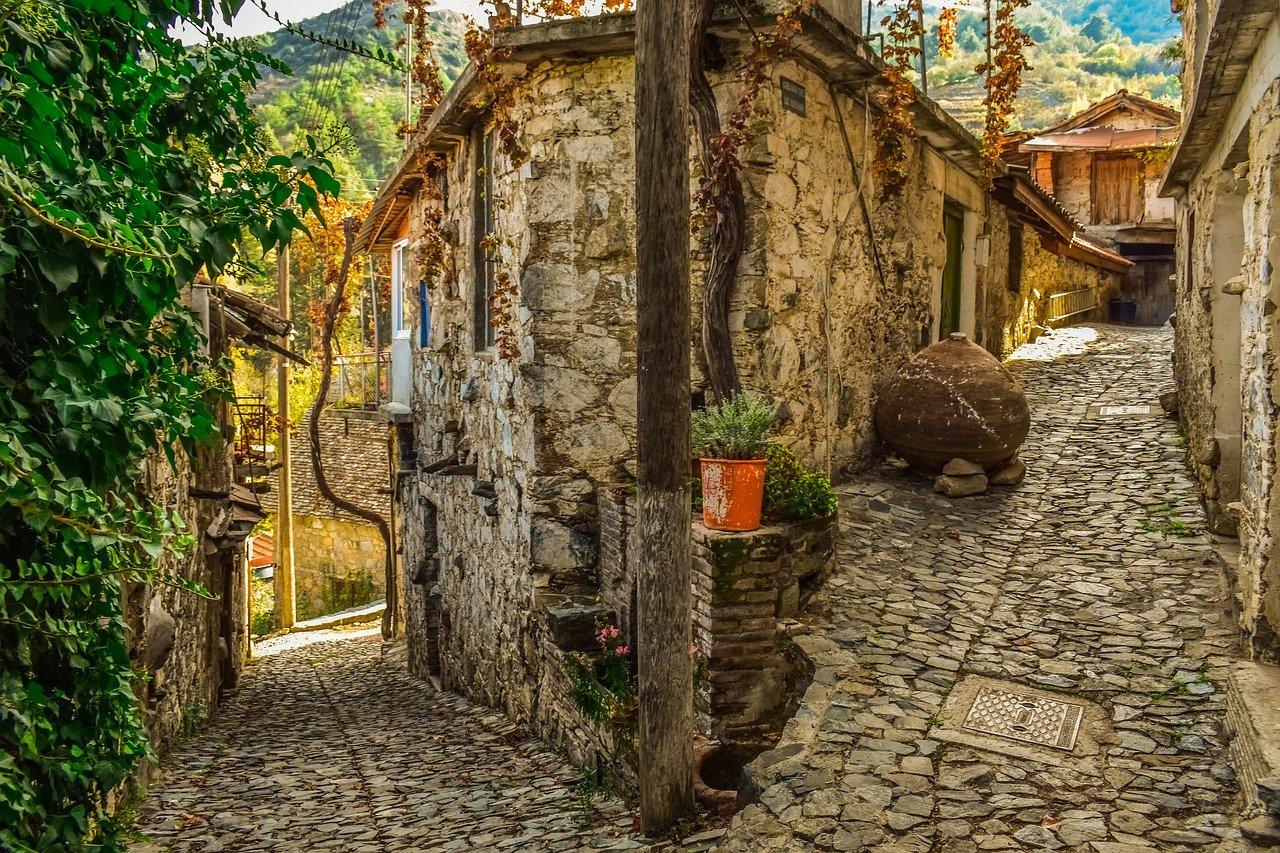 This is understandable, quite often there is practically nothing left of the traditional buildings, as one- or two-story houses have been replaced by modern cottages and villas.

But even when we find ourselves in a village that has preserved its original atmosphere (for example, in Kakopetria, Fikardou or Pano Panagia), we pass by village houses, not paying attention to them. 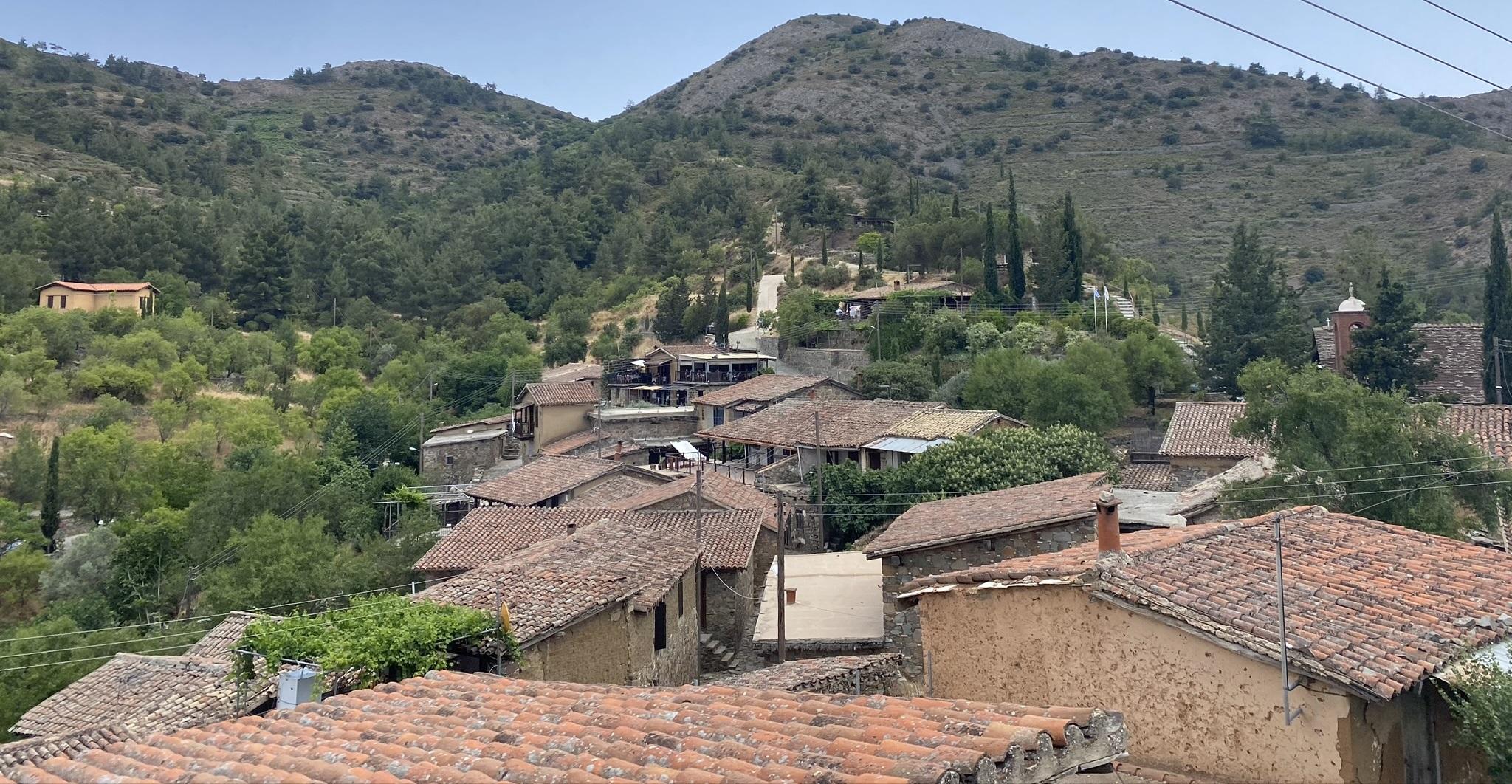 Oddly enough, everything is because of the Cypriot rural architecture.

Houses in Cyprus were not built to show their facades, courtyards or gardens to passers-by, but to isolate residents as much as possible from uninvited guests. High stone fences and tightly locked gates still hide houses from casual onlookers.

What is a Cypriot home? 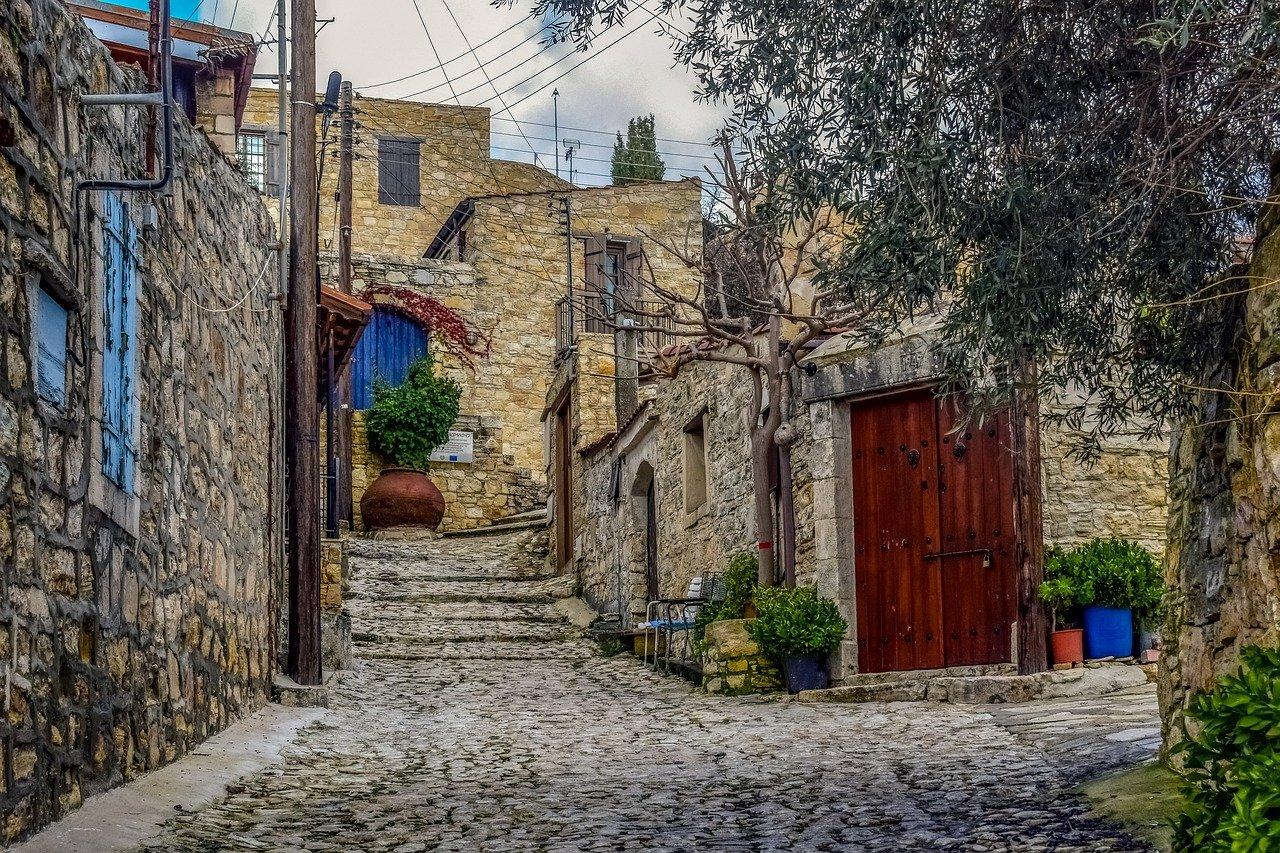 Of course the Cypriot village architecture is very diverse and not all rural houses were necessarily built according to the plan described in the article.

There were private dwellings with no courtyard at all or with a backyard, houses with carved wooden balconies, houses without stone fences, etc. So the described type is not universal, but it is absolutely certain that it is very widespread. Moreover, it has influenced some modern building designs that want to look traditional.

Before starting to describe the Cypriot home, let me ask you a riddle.

There were many unusual devices in Cypriot houses, which now look very strange and incomprehensible to us. What do you think this thing was needed for? The answer will be at the end of the article. 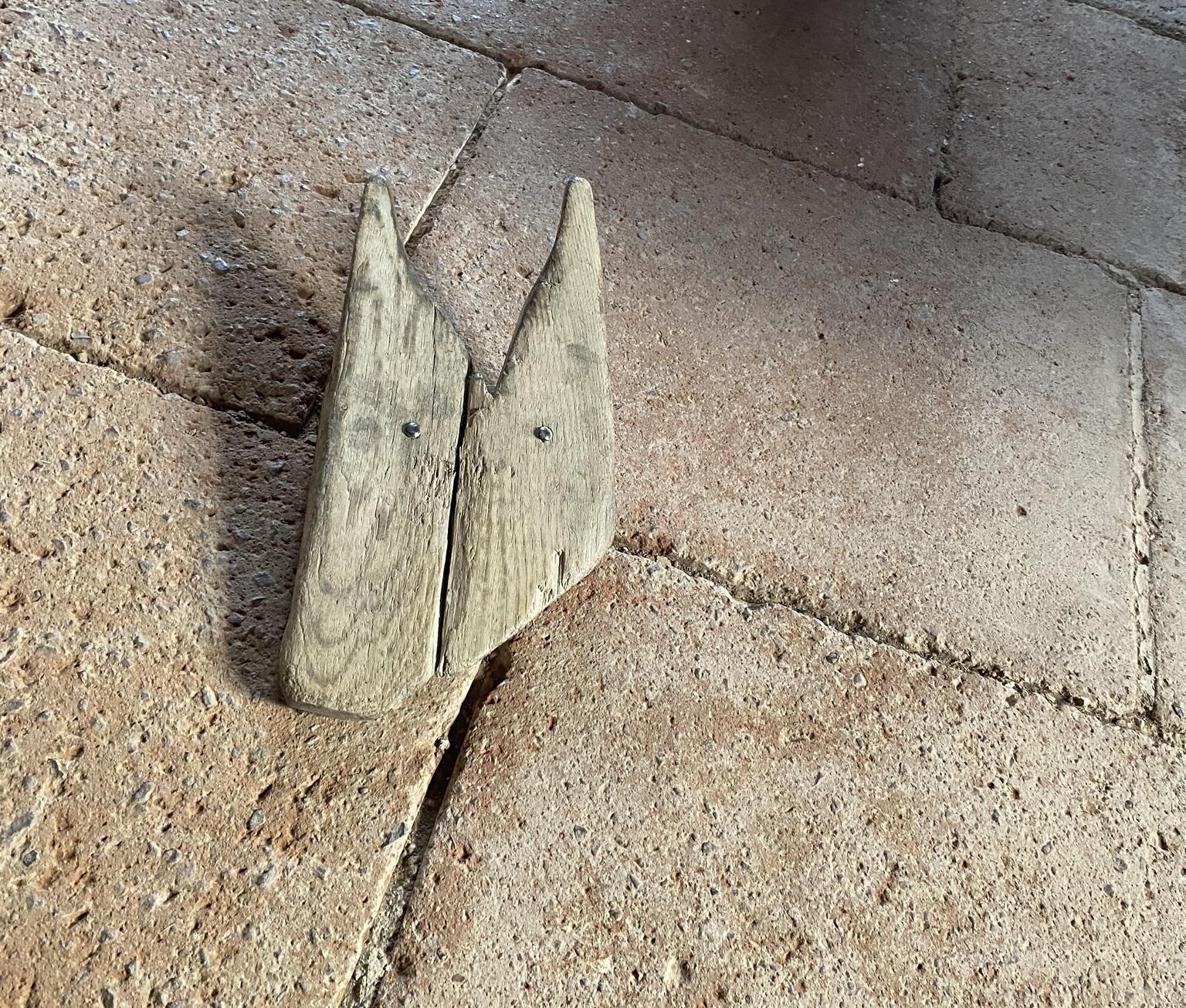 Cypriot villages (just like any villages) were usually built without an original plan, and the location of streets and houses was in direct proportion to the terrain and natural conditions (slope of the hill, the presence of a river, etc.). One thing is for sure - the island's villages have always been compact. 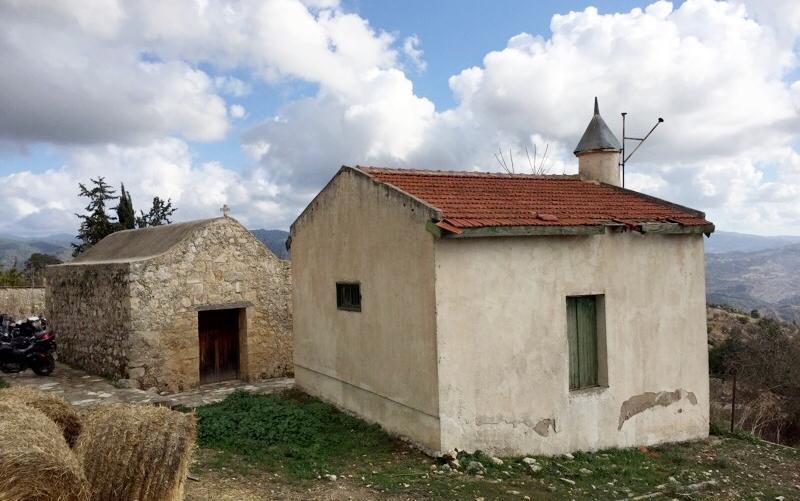 In the center there was a church or a mosque (or both, as in Malia or Melandra), there was a tavern, coffee shops operating around a small village square, and there were narrow streets from the village's center, earthen or paved with stone, connecting the houses with each other, and the village with surrounding agricultural fields or vineyards. 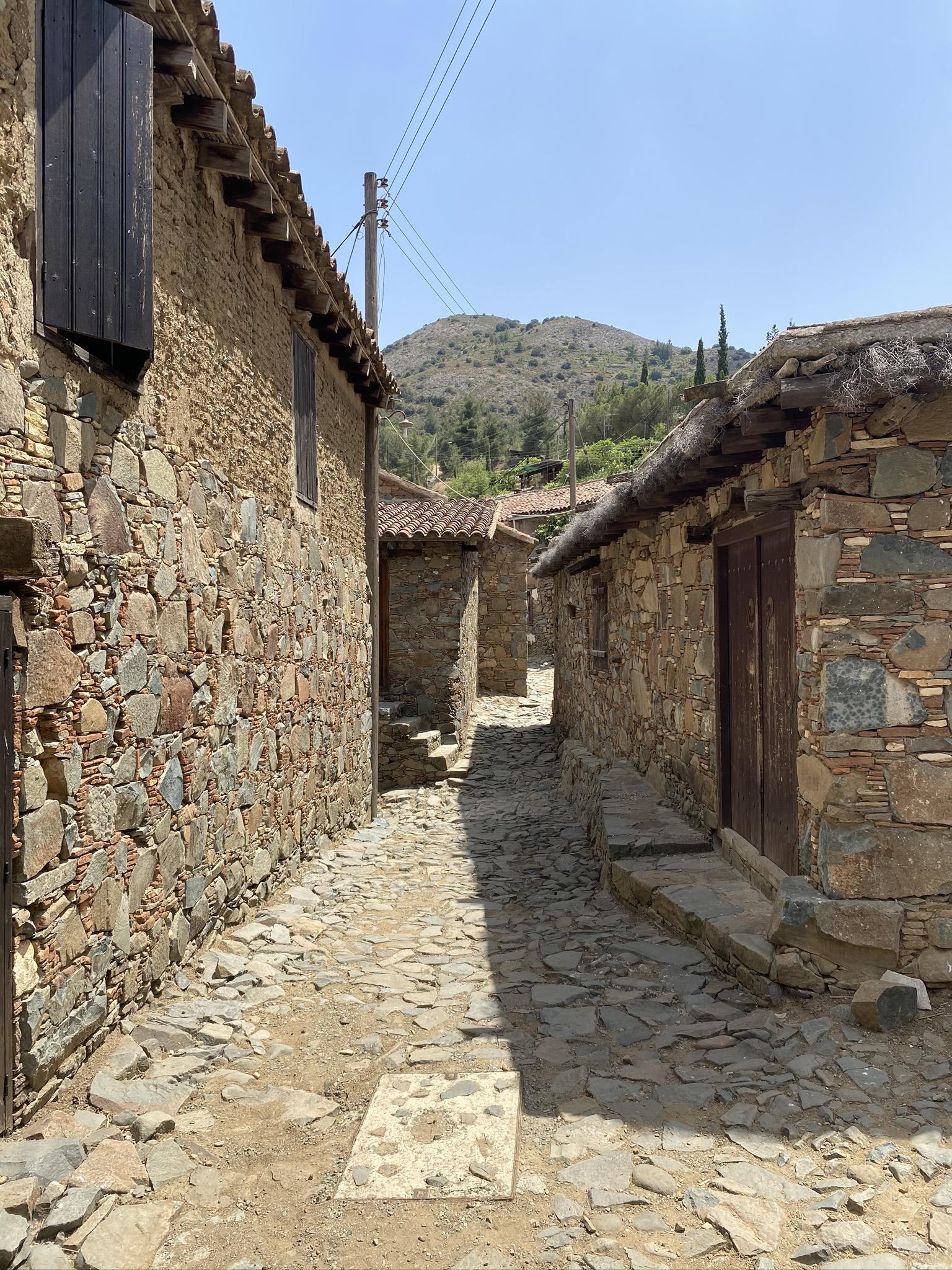 The traditional house was usually built without any preliminary plan, but at the same time it always met the needs of the family who lived in it for many generations. For the construction of the house, they used stone, wood or plinth (flat brick), which the Cypriots inherited from Roman and Byzantine architecture. The roof was made of reed and olive wood, less often oak planks were used. 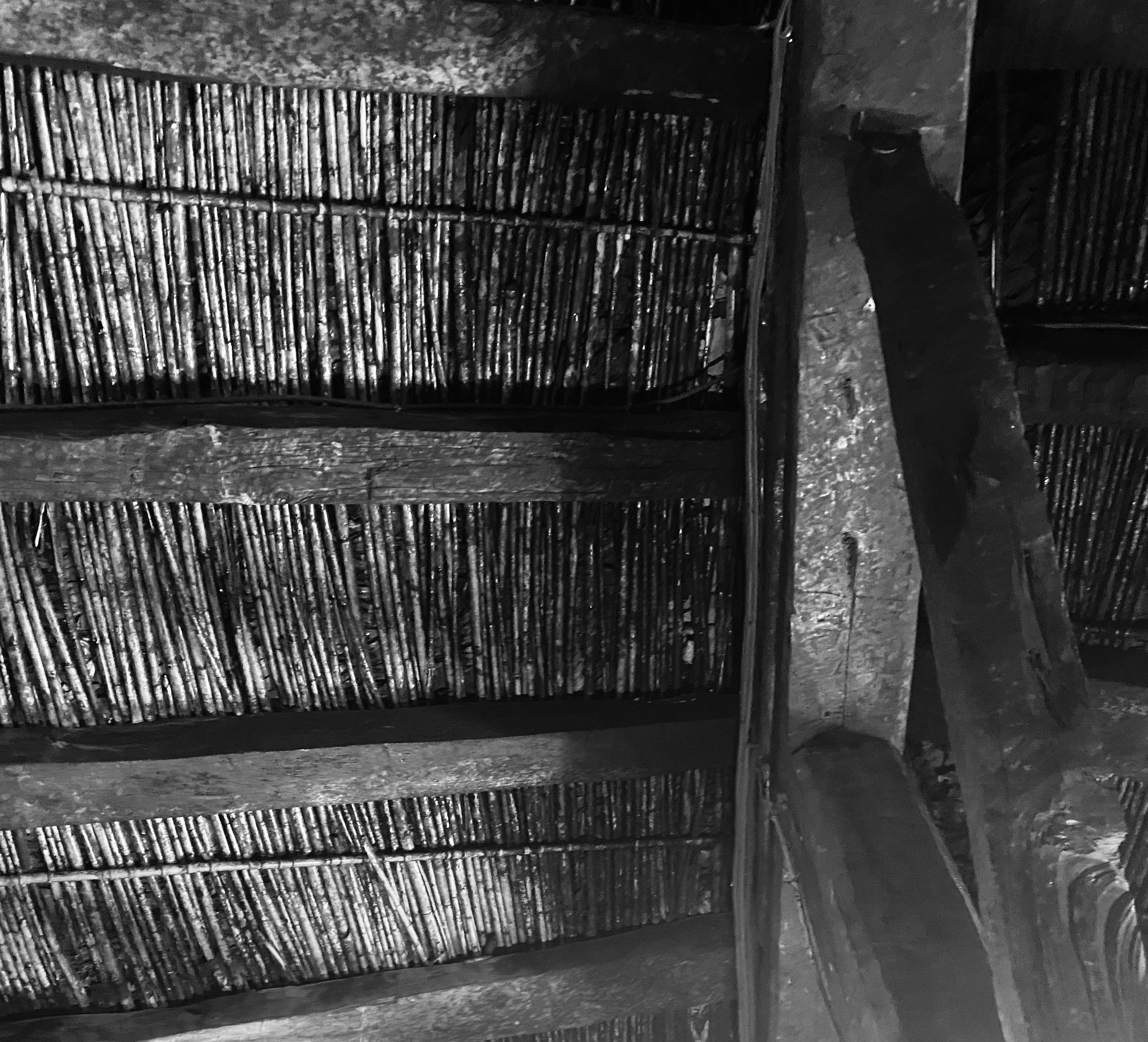 Along the streets were residential houses, which were fenced off by less high, powerful stone walls that hid the routine life of the residents from prying eyes. There was a door in the fanse that led to a spacious courtyard. This courtyard was the main work space, and quite often also a living place for pets. 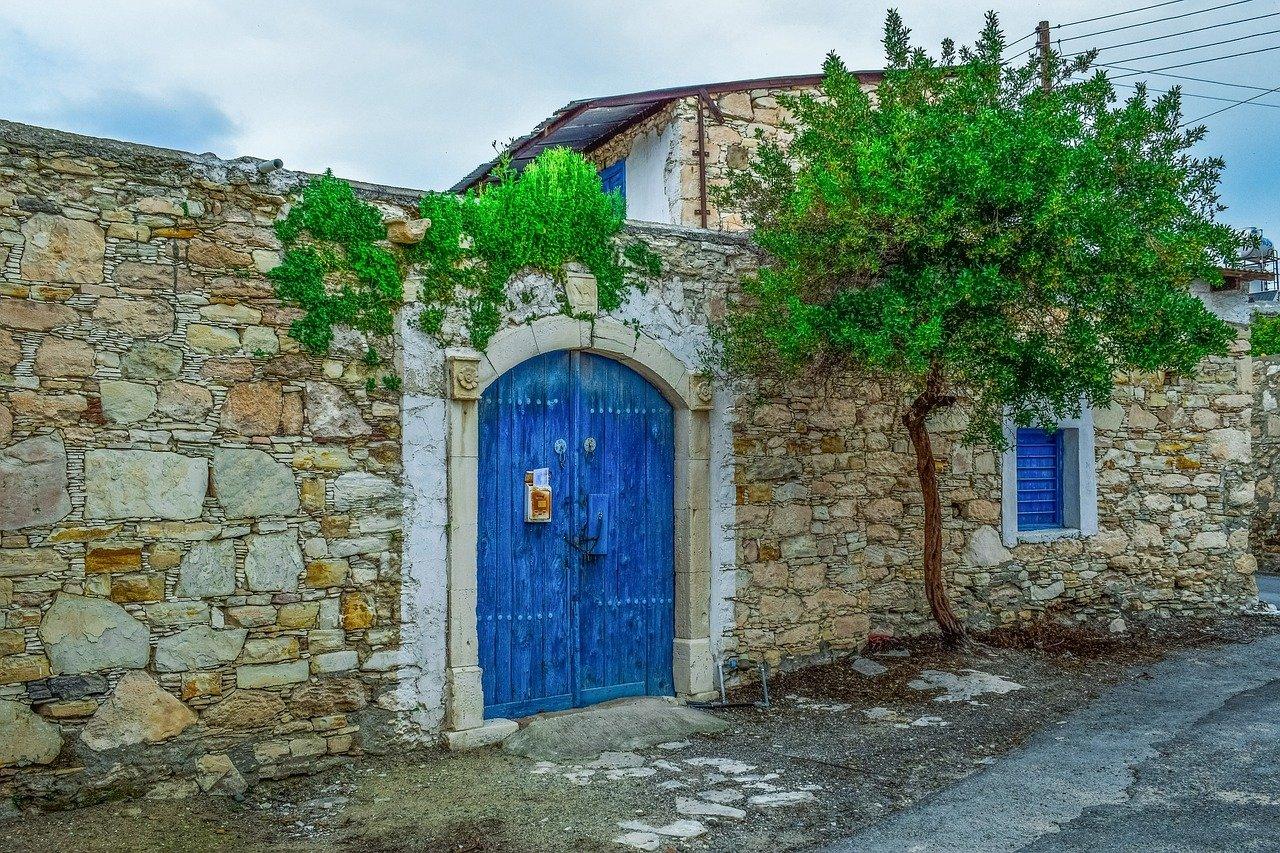 On three sides it was surrounded by a fence, and on the fourth side was the house. Usually the houses had one or two floors. They were either straight and elongated along the courtyard, or had the shape of the letter Γ.

The usual architectural component of the house was a small arcade (a half-open space fenced off from the main courtyard by arches, it was an intermediate place between the living quarters and the courtyard). This arcade was called iliakos (sunny place). 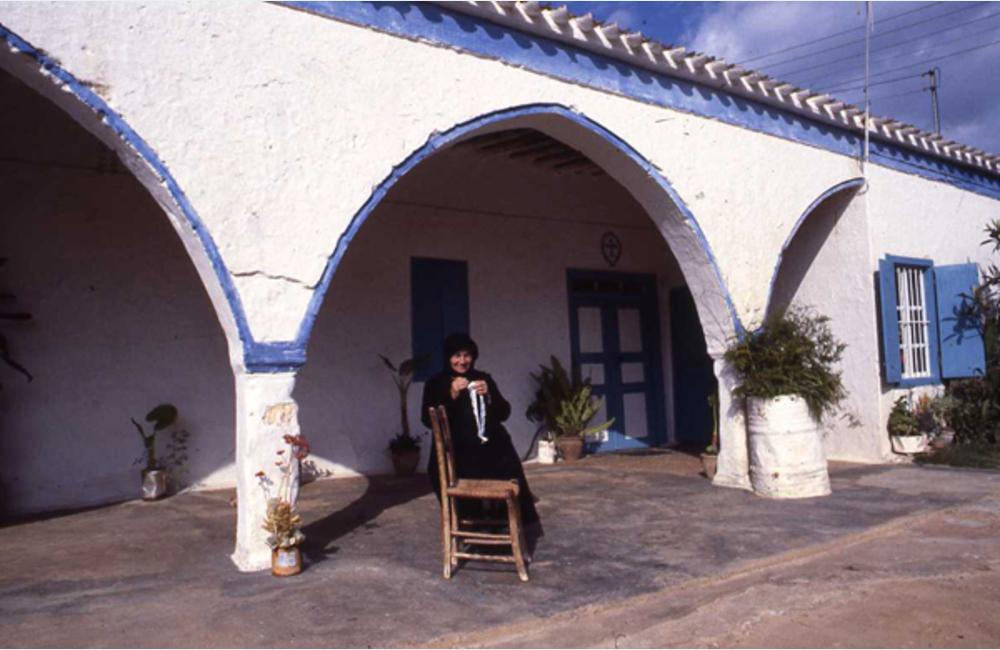 The simplest "iliakos" was arranged as follows: the roof (Cypriot Greek Doman [Δώμαν]) of the house protruded 2-3 meters forward, it was propped up with wooden beams or, if the family was richer, they made stone arches. Thus there was an open space protected by a canopy from the sun and rain. 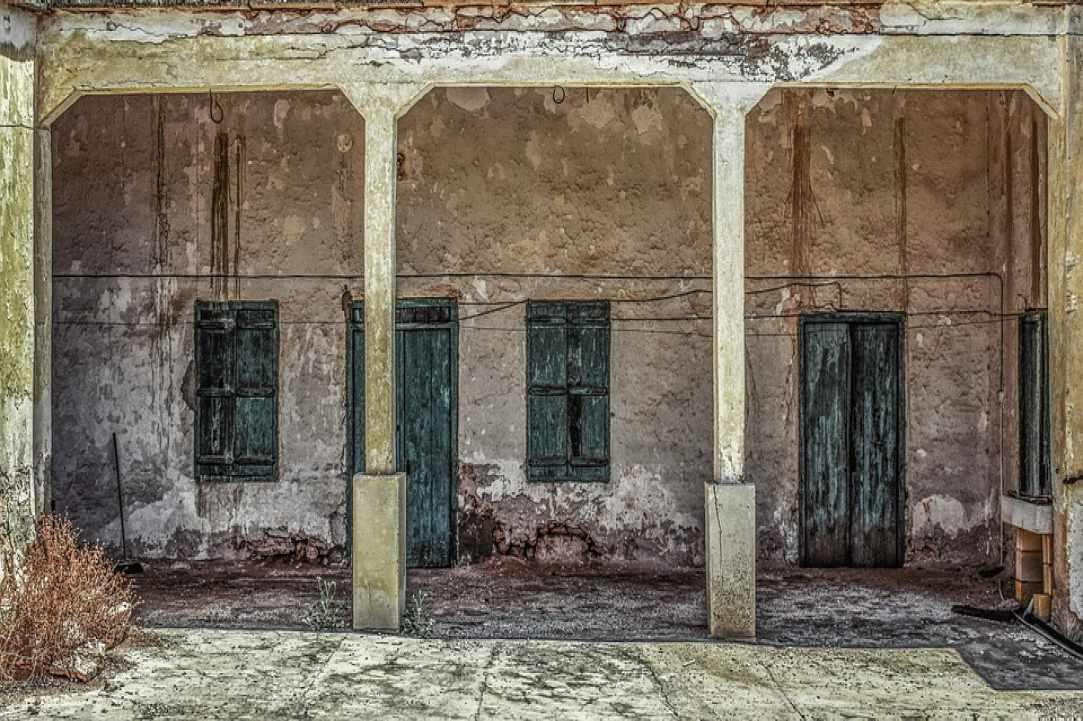 Here the columns at the iliakos are made of concrete, but the principle of organizing the space has remained unchanged.

While the courtyard was used for various jobs, the iliakos was the main social space.

Here the hosts could receive guests, offering them coffee and sweets, here the neighbors gathered, who were engaged in some kind of handicraft and at the same time discussed the latest village news. Such a semi-open space became popular due to the warm Cypriot climate, and also because there was often no place inside the house to receive guests.

On one end, the iliakos usually had a mairko (μαειρκό), a place for cooking and washing dishes. Here they put a traditional Cypriot oven in which they baked bread and made kleftiko. There was also a gurna (γούρνα) or vurna (βούρνα) - a large tub for kneading dough. Nearby could be located niskia (νισκιά), it's a small simple hearth made of stones. The stones were usually simply laid out with the letter Π, a fire was made in the middle, and a cauldron or a metal support for the utensils was placed on top. However, the presence of niskia did not mean the the house itself did not need a fireplace inside, at least for heating in winter.

Even in the iliakos, closer to the front door, there could be a stand for jugs of water. The water was brought outside at night so that it would cool down, and early in the morning residents could drink and wash with cool water. The floor in the rich iliakos was paved with stones and decorated with flower beds, while in poorer houses it remained earthen. 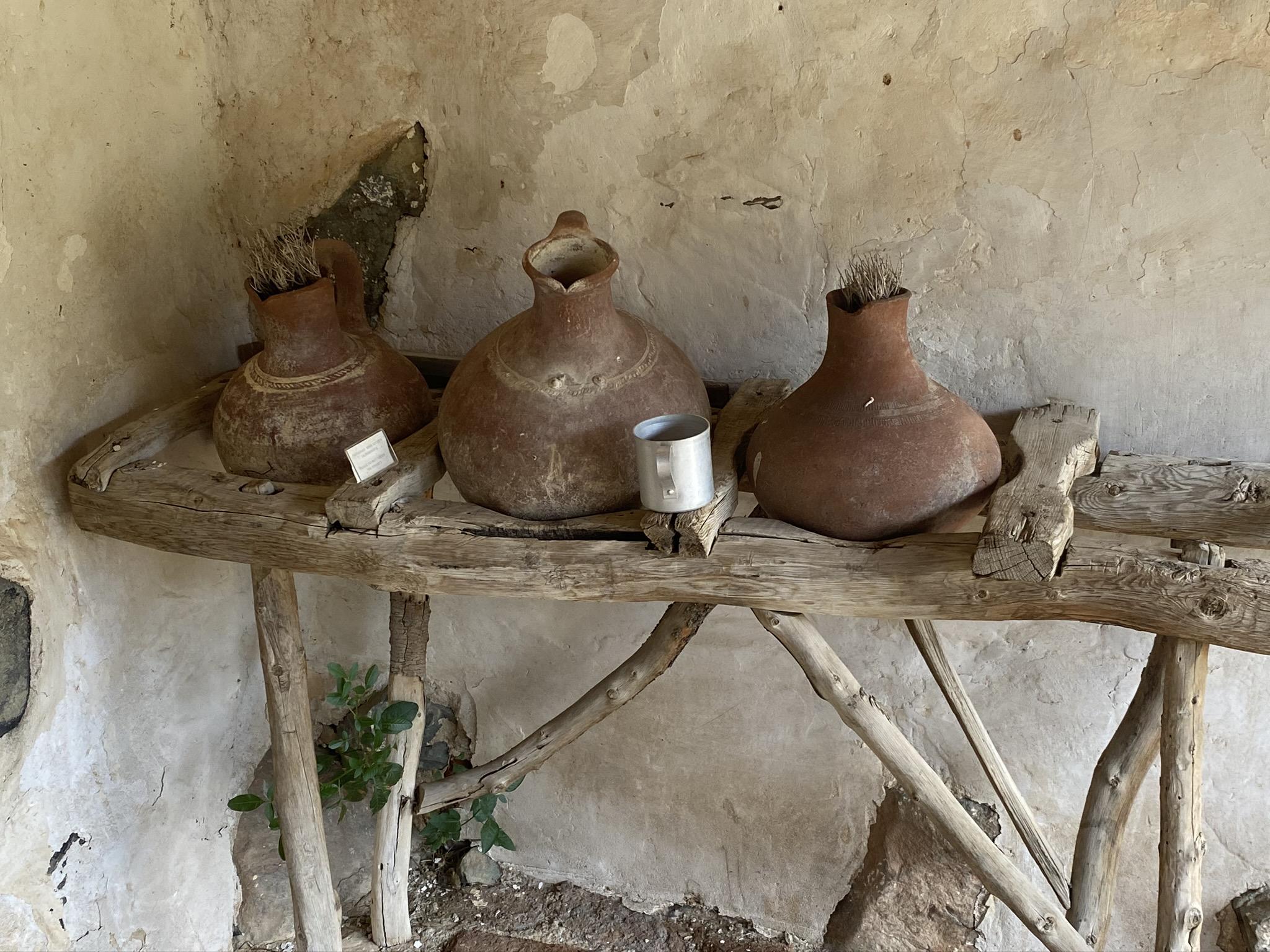 If the had the first floor which was called anoin (ανώιν). The staircase (stone or wooden), connecting the two levels, also went along the outer wall, that is, from the iliakos up to the balcony. In wealthy houses, the outer wall of the house, facing the courtyard, and the columns of the iliakos were decorated with carvings or frescoes, and a colonnade called the portion (πόρτιον) could lead from the gate into it. Iliakos could also be doubled, i.e. divided in half (along the wall of the house) by an arcade.

The rooms of the house, which were called makrinari (μακρυνάρι), went out into the iliakos. The doors and windows were narrow, and a small hole was often made above the entrance door to the room, which was called arsera (αρσέρα). It was made for ventilation. 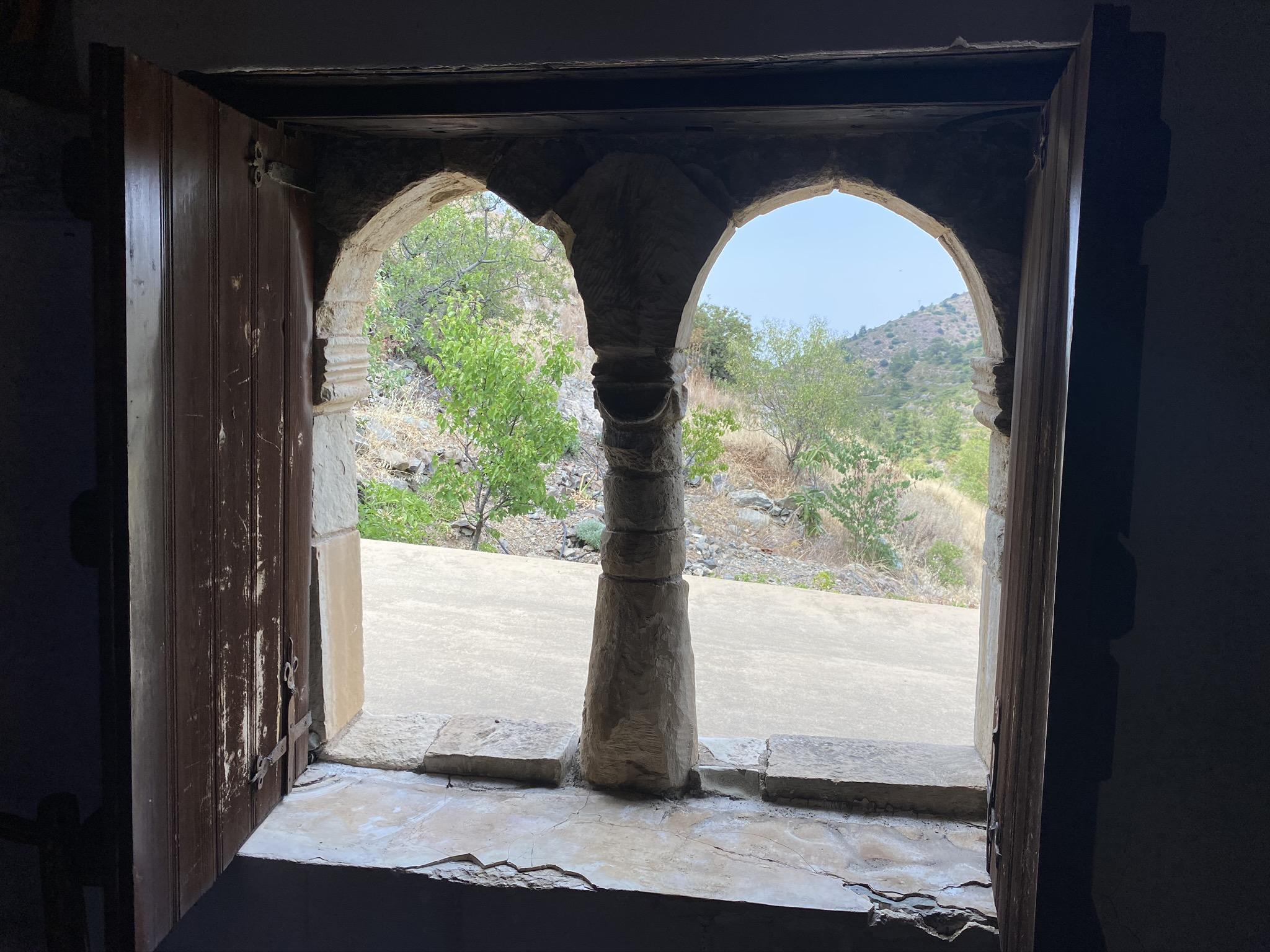 There were no glasses in the windows. They were shuttered.

Usually makrinari (μακρυνάρι) was a narrow, long room, not connected with other rooms. It was possible to get from one room to another through the iliakos. Traditional houses never had extra space, they all had a clear purpose to serve the needs of the family on a daily basis. The main room was called dikhoro (δίχωρο, "double space"), since it consisted of two double rooms-makrinaris, between which they could make not a wall, but an arch. If there was an arch, then the main hall was called palati (παλάτι "chambers, palace"). Dikhoro served as a living room, dining room and often even a bedroom for a large Cypriot family. 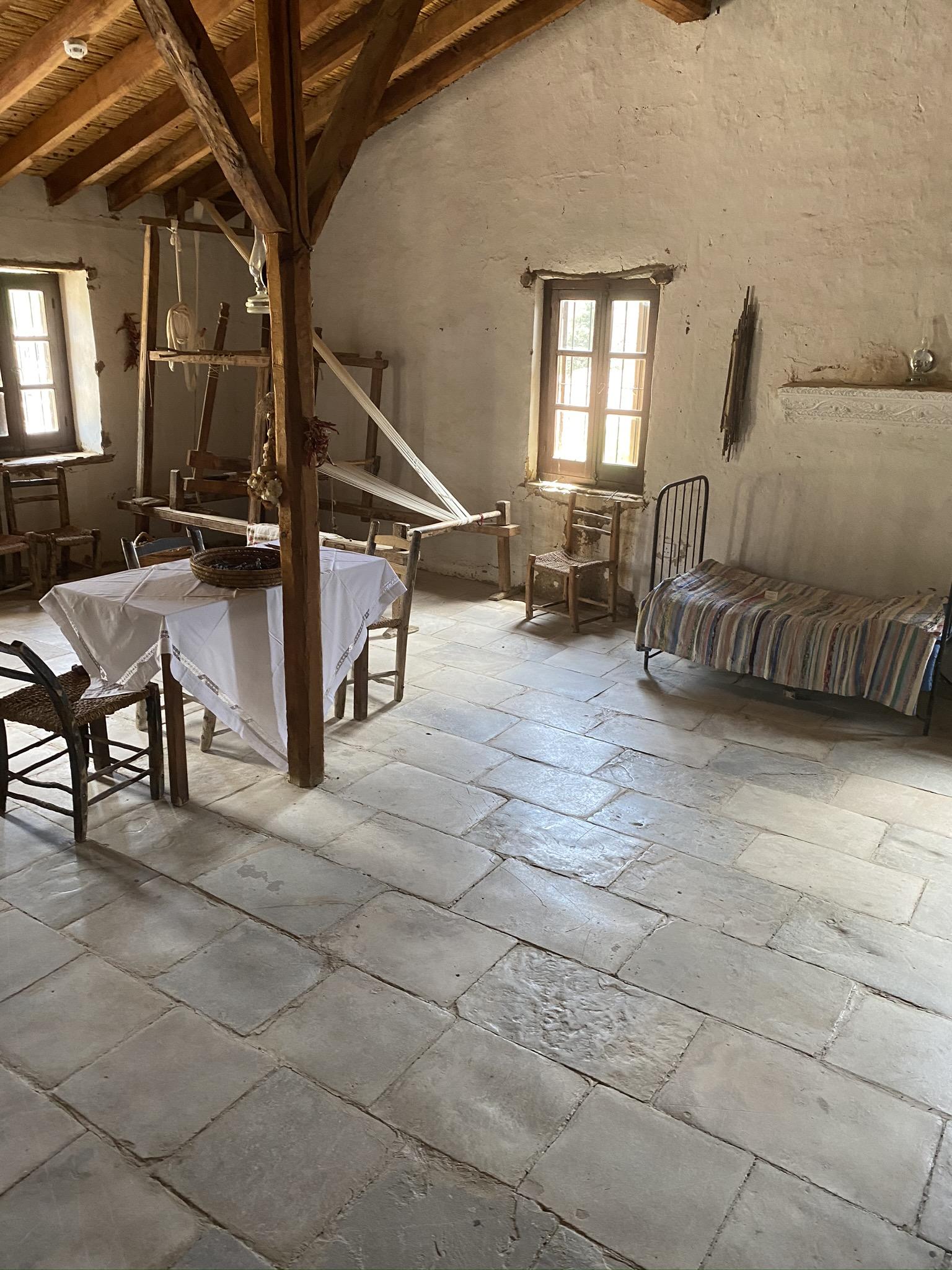 In the most conspicuous place was the armarolla (αρμαρρόλα or αρμαρόλα) - a wardrobe, the doors of which were decorated with different patterns. Large wooden chests could be located along the walls. 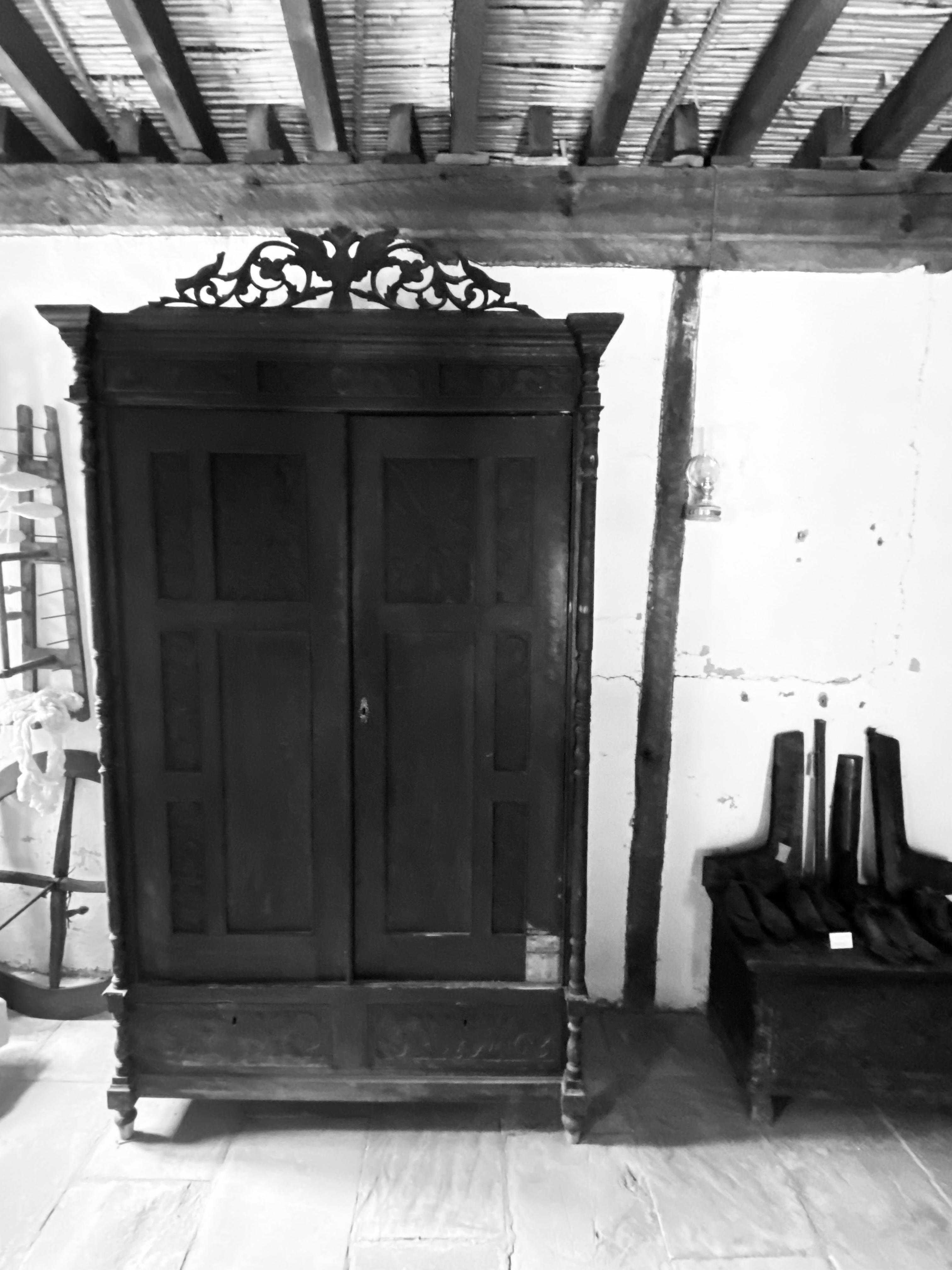 Armarolla with the Byzantine eagle

A characteristic element of the interior was a plaster or wooden shelf, long, but narrow.

The shelf was called souvantza (σουβάντζα). Beautiful plates, glasses, cups, jugs, copper dishes were placed on this shelf. In general, everything that could serve to decorate the interior space. In most villages, souvantza was white, but somewhere it was painted in bright colors or decorated with stucco. If, of course, the family could afford such a luxury.

Silk patterned fabrics could be on the walls of the house. Silk production in Cypriot villages was very popular. Silk clothing was not a sign of particular elitism, since the production of silk thread was available to many families. As a result, it turned out that the Cypriot peasants dressed in silk shirts, shirts and dresses.

Beds in a Cypriot home usually had a canopy to protect from insects, and metal beds with gilded bedknobs were considered a sign of wealth. 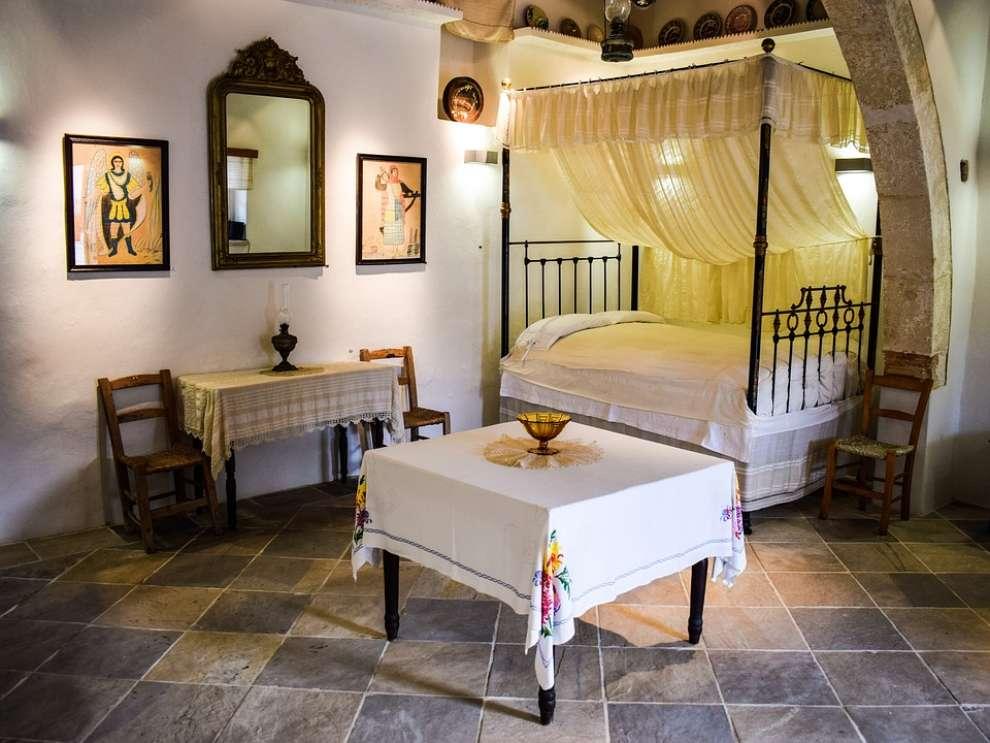 In the house there were necessarily Orthodox icons and a censer made of metal or clay, where they put hot charcoal and incense.

The first floor was usually built when the plot was small and there was no place to build a large ground floor. In the house there was always a utility room called jellari (τζιελλάρι), where vegetables, flour, oil, wine, olives and other products were stored, tools of labor were also put here: a plow, shovels, axes and so on. Very often the utility room was combined with a barn for animals. If the house had two floors, then domestic animals could live on the ground floor, and people on the first. The barn was often equipped with a washing area, although family members could wash in a separate room called loutro (λουτρό).

In the mountains, the landscape often limited the space available for housing.

In this case, the courtyard was rare, and the buildings seemed to climb several levels up the steep slopes. The various floors of the building were accessed directly from the street. At the highest level was often the iliakos, which formed a kind of covered veranda. 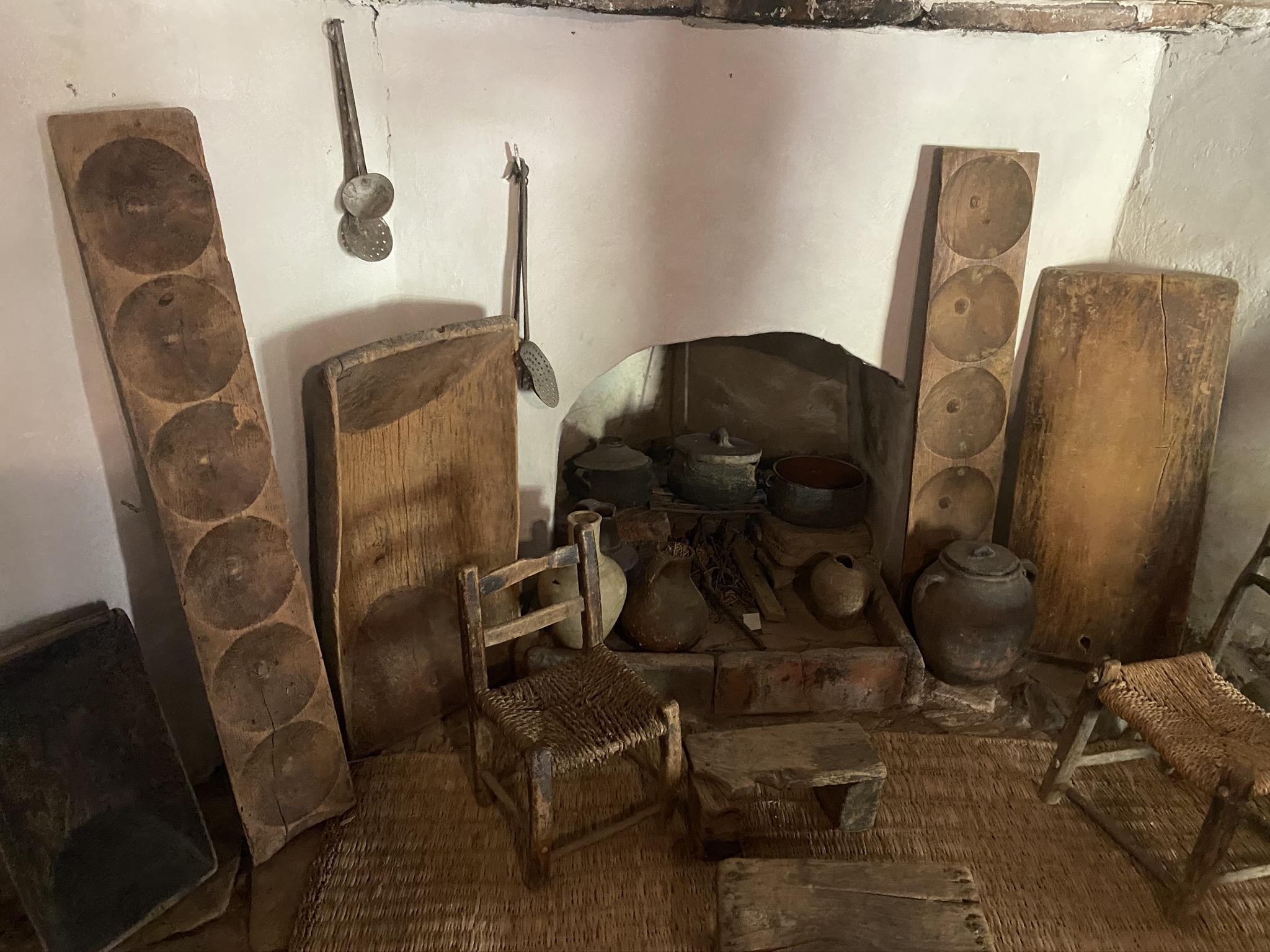 And now the promised answer to the riddle at the beginning of the article.

This thing was used to take off high boots. The heel was put on the strut, while the other foot should press and hold the wooden 'instrument'. The boot was fixed and the leg could be pulled out of it without any problems.

The look of a traditional Cypriot house has changed dramatically over the past couple of centuries.

Today, Cypriots prefer to live in modern villas, residential complexes or high-rise buildings. But the charming simplicity inherent in the village dwelling still gives ideas to architects and designers.

If you are looking for interesting housing options in Cyprus, then check out the DOM Portal. Here you will find residential and commercial properties for every taste and budget.