In 1878, as a result of a secret agreement (the so-called Cyprus Convention between the British and Ottoman Empires) the island was transferred to the British government, who received an excellent place for control of the Suez Canal and entire Egypt.

For this, Istanbul got protection from the territorial claims of its northern neighbor, Russia, whose rulers wanted to restore the Orthodox cross on the dome of Hagia Sophia and take control of the Bosphorus and Dardanelles.

On June 28, 1878, the British warship Pallada moored to the coast of Limassol and its captain took command of the city fort from the Turkish garrison. The next day, the British fleet under the command of Admiral John Hay reached Larnaca. Officially, the island was transferred to the British Empire on July 12 in Nicosia. The period of British rule in Cyprus began. The Cypriots call it Anglocracy (Αγγλοκρατία) (1878-1960). 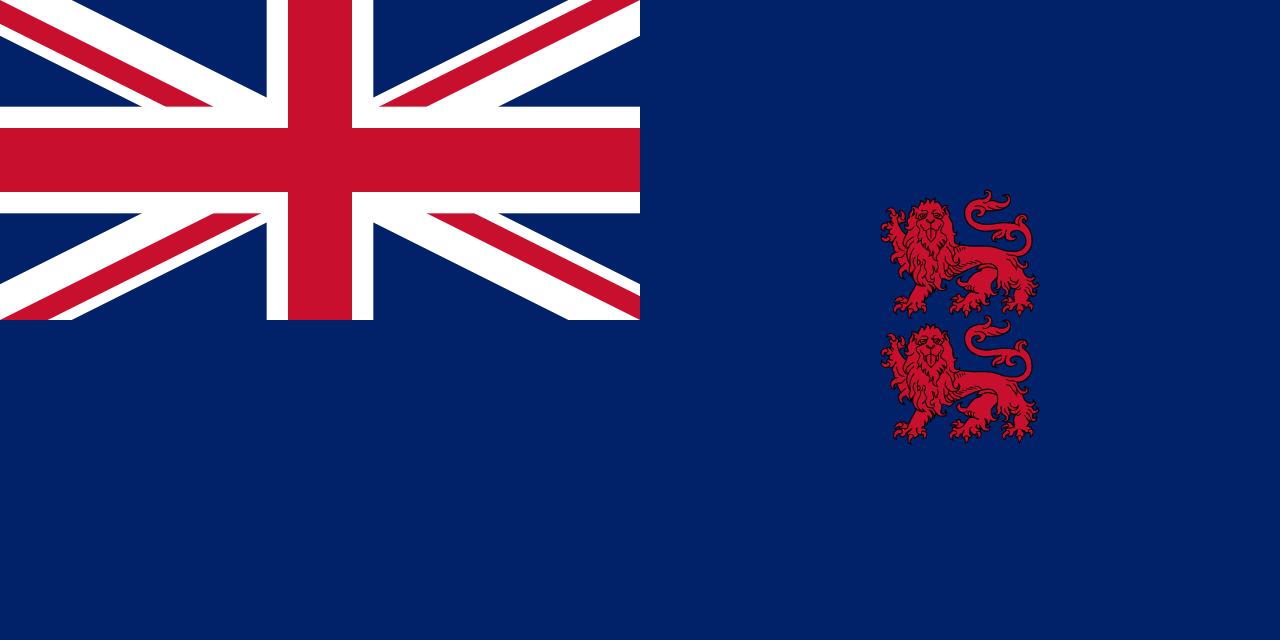 The island of Aphrodite was then not the Paradise on Earth.

The Cypriots were dying from malaria, which was a real problem, the crops were destroyed by locusts, most of the inhabitants lived in poverty, and an intercommunal confrontation between the Greek Cypriots and the Turkish Cypriots was slowly forming. In their appearance, the cities and villages of Cyprus were more like the Middle Eastern backwaters. If the island was one of the most undeveloped regions, then the British Empire of the second half of the 19th century, on the contrary, was the leader of the “civilized world”. Britain (including the colonies) had more than a third of all world trade. The light industry had already been mechanized. The advent of the first refrigeration units made it possible to deliver products from New Zealand and Australia to London with no loss in quality.

One of the purely English secrets of success was just the exploitation of the colonies, the natural resources of which were taken from the indigenous population ("new-caught, sullen peoples, half-devil and half-child", as Kipling wrote in his poem "The White Man's Burden") and exported for the benefit of the metropolis.

Without going deep into the analysis and assessment of British colonial policy, which had its pros and cons, let's just say that for Cyprus, the arrival of the British in economic and cultural terms meant a 180-degree turn: from a Middle Eastern lifestyle to a European one. The British carried their culture to all parts of the world wherever they were present. 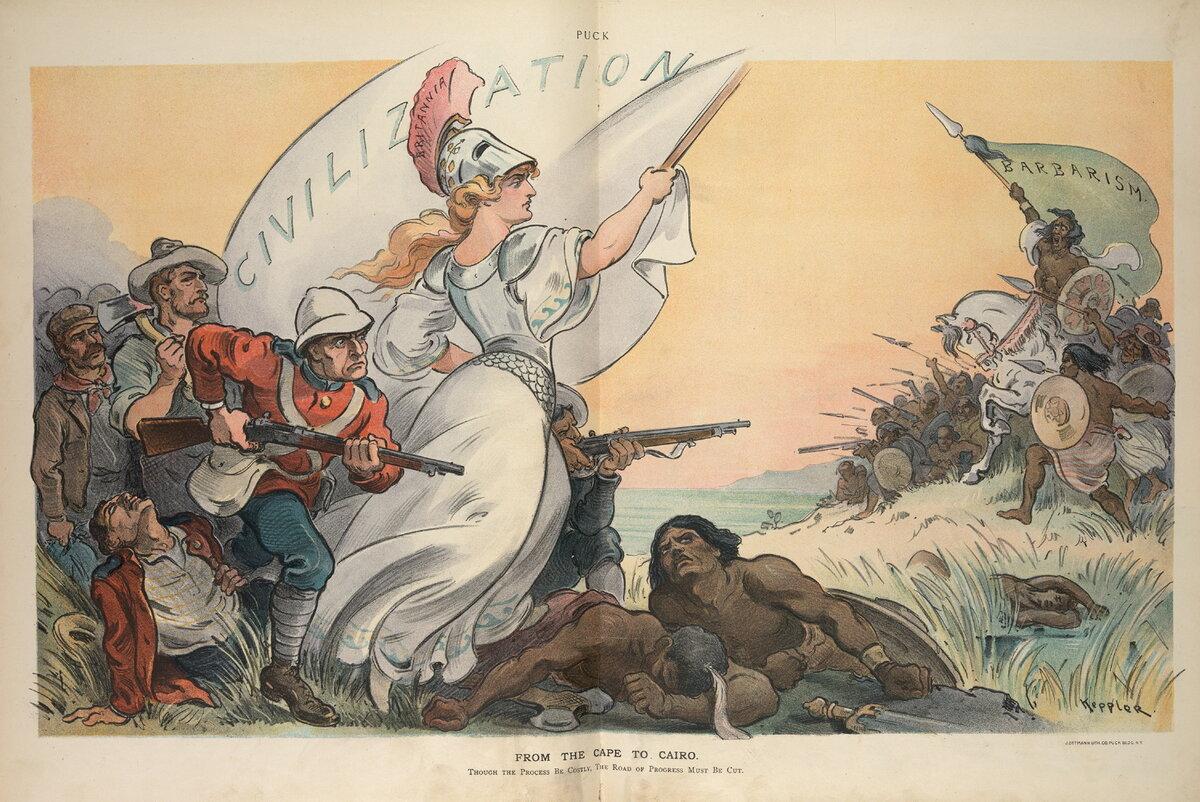 The British 'bring civilization' on a 19th century propaganda poster

But if in India, Kenya or Yemen, the planting of European models looked artificial, then in Cyprus it was organically. Cyprus for a long time, before the Turkish conquest, was part of the European world. First part of the Greek and Byzantine civilization, then part of the Frankish and Venetian culture. Therefore, the westernization of the island after the arrival of the British went naturally - Cyprus simply returned to its roots (an excellent symbolic example of this is the construction of the Cyprus Museum, which is discussed below). 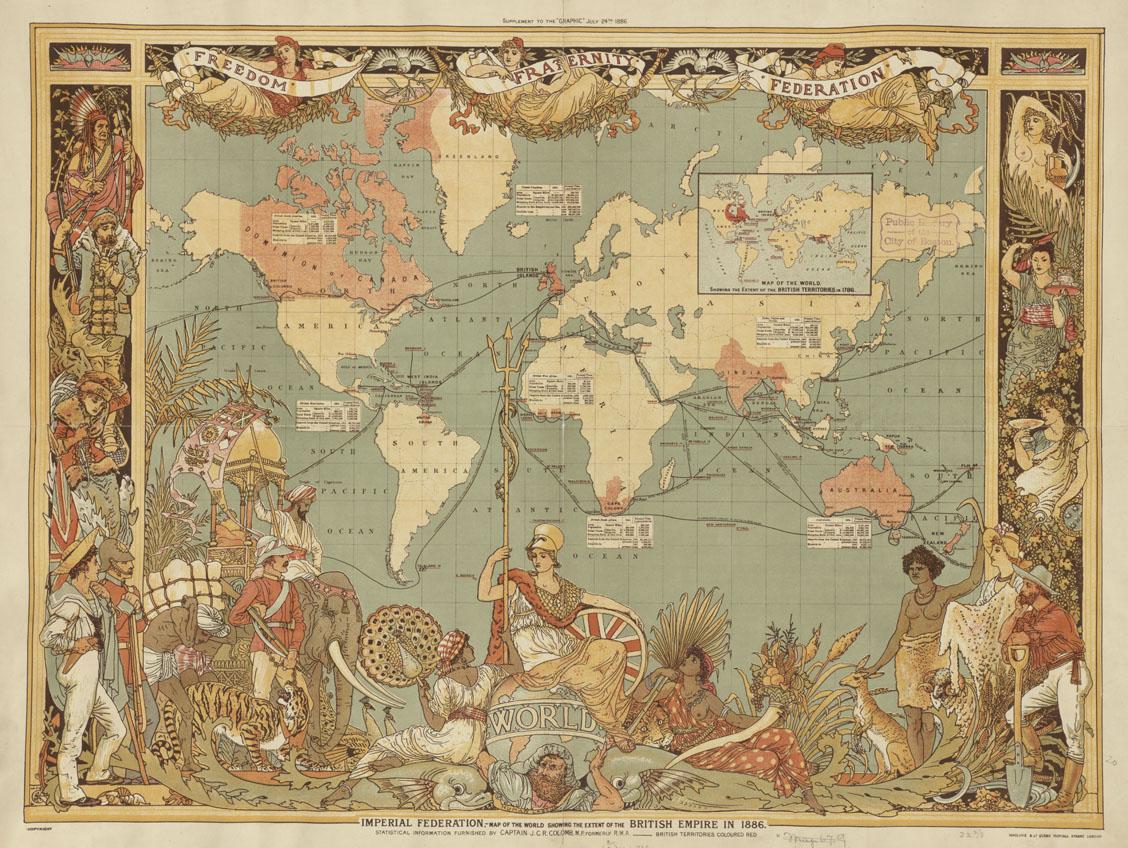 Territories of the British Empire in 1886

In this article, we will not discuss the role of the British in making modern Cyprus. Let's just talk about the impact that Anglocracy (Αγγλοκρατία) had on Cypriot architecture. Was there a separate colonial architecture and what were its characteristic features?

The term "colonial architecture" is disputable.

There is no single "colonial style" that the British would strive to impose in all their colonies. Therefore, in different parts of the world, which Britain ruled over, the architecture is quite different. Somewhere (for example, in Calcutta, the capital of British India) there are many buildings which look exactly like buildings in Britain. 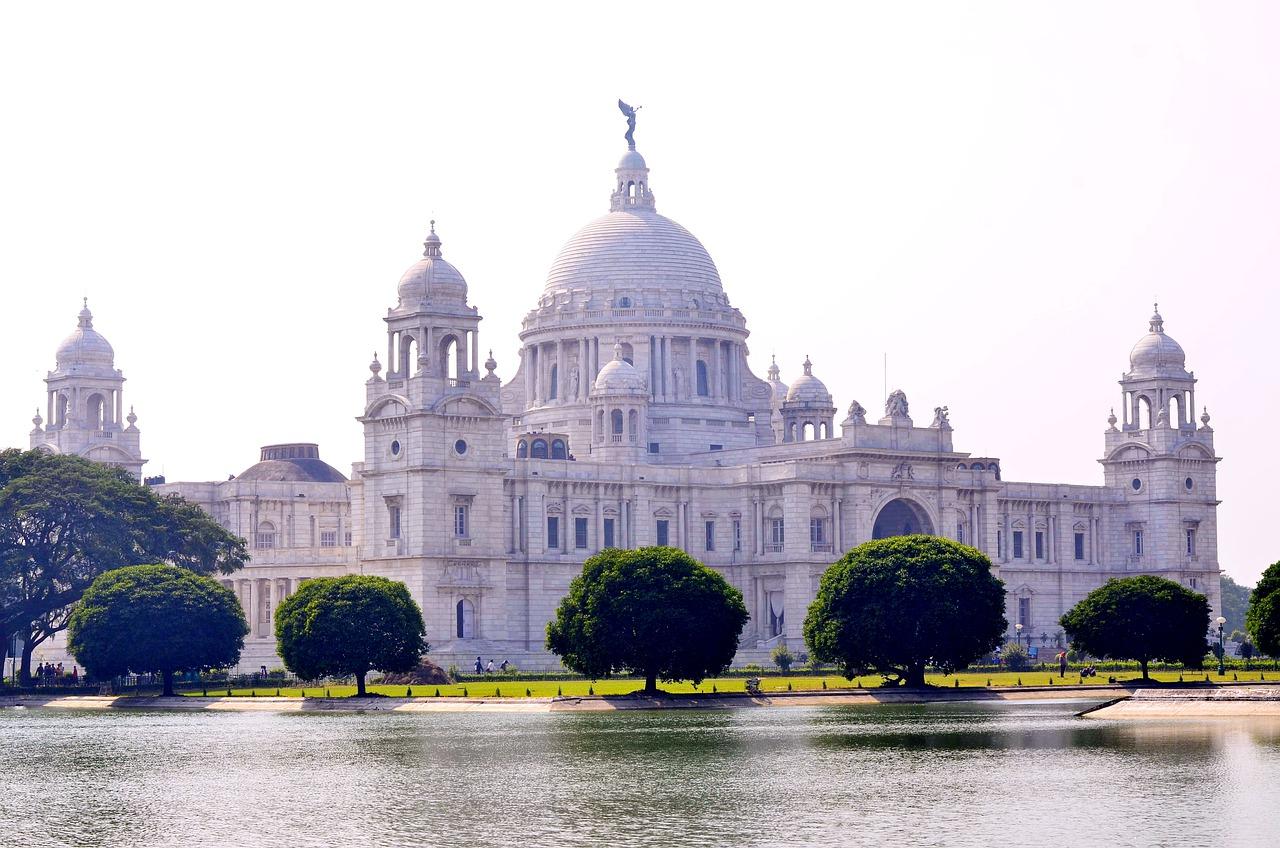 In other places (among them was Cyprus), there were unique styles, which combined the features of contemporary European architecture with local elements. So "colonial architecture" just means architecture that appeared during the period of British rule. In India, it was one style, in Australia another, in Pakistan the still other.

According to the calculations of the Cypriot scientist Costas Georgiou, the author of the impressive work "The architecture of Cypriots during British Rule", 700 colonial buildings have survived on the island. Local colonial architecture can be roughly divided into three types: traditionally British buildings without any local elements (in Cyprus, this type was the less popular), "classic colonial architecture" and "colonial neo-Cypriot style" (all terms were invented by the author of this article, look for them in scientific literature makes no sense).

In Cyprus, the British did "copy-and-paste" architectural styles. There are practically no buildings on the island that would absolutely repeat the English models. There are, however, three examples of such automatic copying of the architectural style of England, all of which have an important symbolic, or even ideological, function.

First Anglican priests arrived in Cyprus shortly after 1878. Their main goal was to support the British who served here. At first, services were held at the home of the priest Josiah Spencer. Later, Lieutenant Herbert Kitchener (he became famous for having made a detailed map of Cyprus in 1882), who was a religious man and local church head, tried to buy the Bedesten market building from the Turks. The choice was not accidental, since Bedesten previously was a Gothic church of St. Nicholas, adapted by the Turks for commercial needs. However, the law prohibited the constructions of non-Muslim temples closer than 600 meters from mosques, and the Selemie mosque was located right across the road from Bedesten. Therefore, the Anglicans had to look for another place. It was found very soon - on the hill of St. George opposite the Supreme Secretariat (today this historic building houses several ministries). The first building was seriously damaged by the earthquake and was moved to a new location - where the Cathedral of Saint Paul still stands. The first church service was held in 1885.

The temple is an excellent example of Victorian religious architecture with a bell tower, portal, gable roof and other details that make visitors freeze with surprise. Next to the temple, there is a clergyman's house, made in the same style. Anglican churches in the 19th century were usually built in the Victorian style, regardless of where they were in the world.

The second building, built in the Victorian style, is the St George-in-the-Forest, Troodos Mountains.

Initially, it was a church at the English military camp (the camp, by the way, has survived to this day). Not a very successful renovation deprived this atmospheric temple of a tiled roof (the tiles were replaced with metal sheets), but in general this landscape looks quite English today. 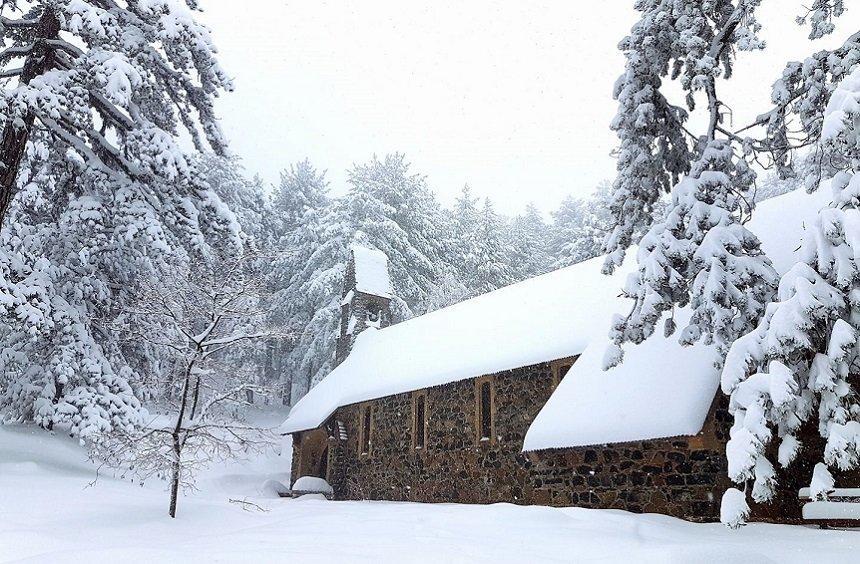 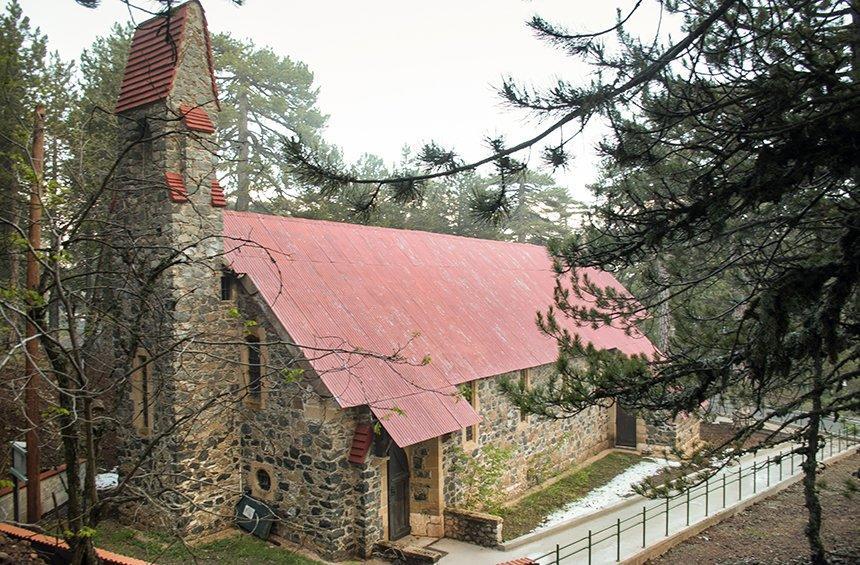 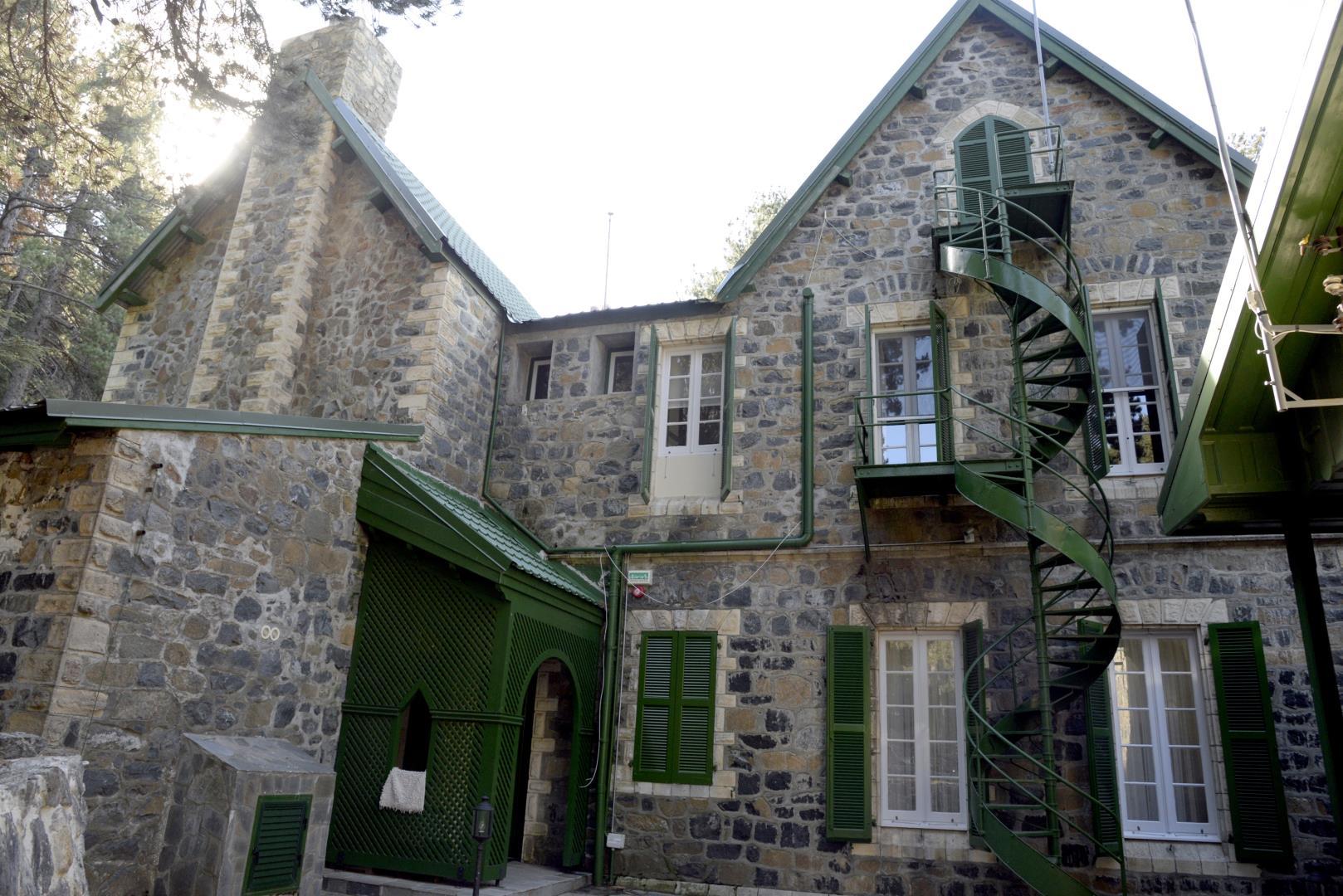 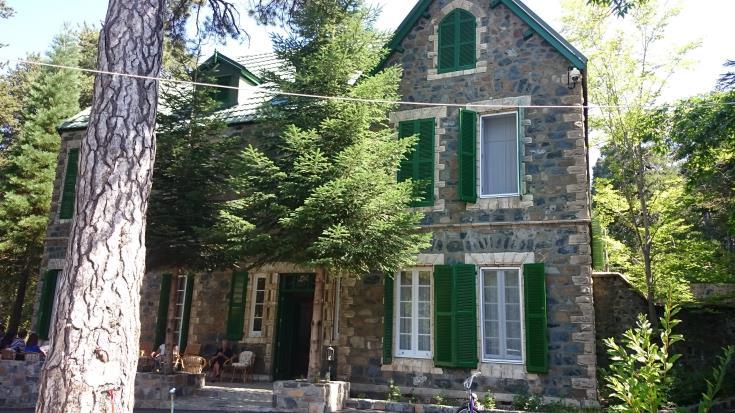 It was built in 1880 and is famous for the fact that the poet Arthur Rimbaud worked on its construction, who served here as a manager. In 1946, in memory of this, a commemorative plaque was opened, on which, with irony typical of the British, it is said:

"Arthur Rimbaud, a genius French poet, despite all his fame, worked with his own hands on the construction of this building."

The second type is buildings with, as a rule, unbleached walls, made of large tuff blocks (tuff is a yellow Cypriot stone). 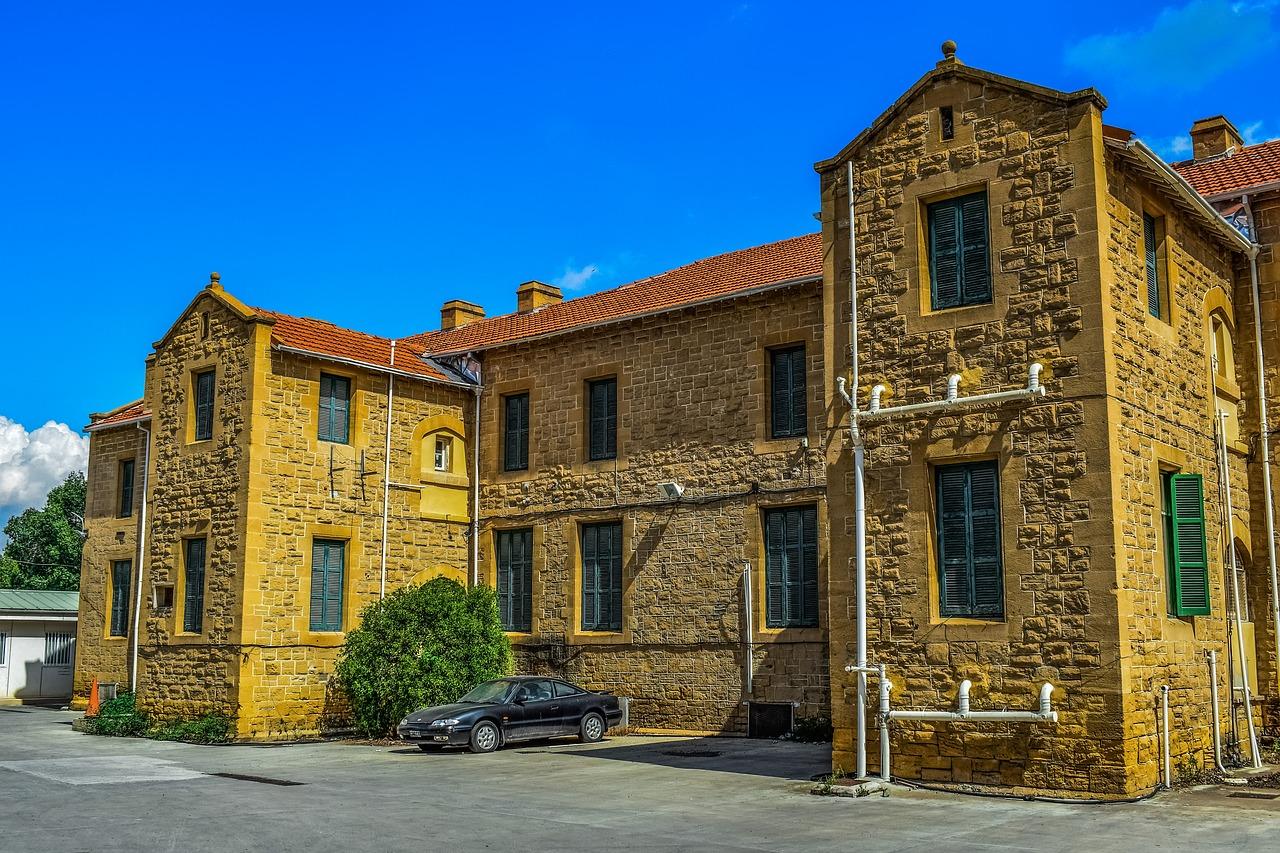 Their characteristic feature is often an arcade with pointed arches imitating the Cypriot Gothic style, doors can be in the form of gates, which were arranged in traditional village houses, windows often have stone frames. 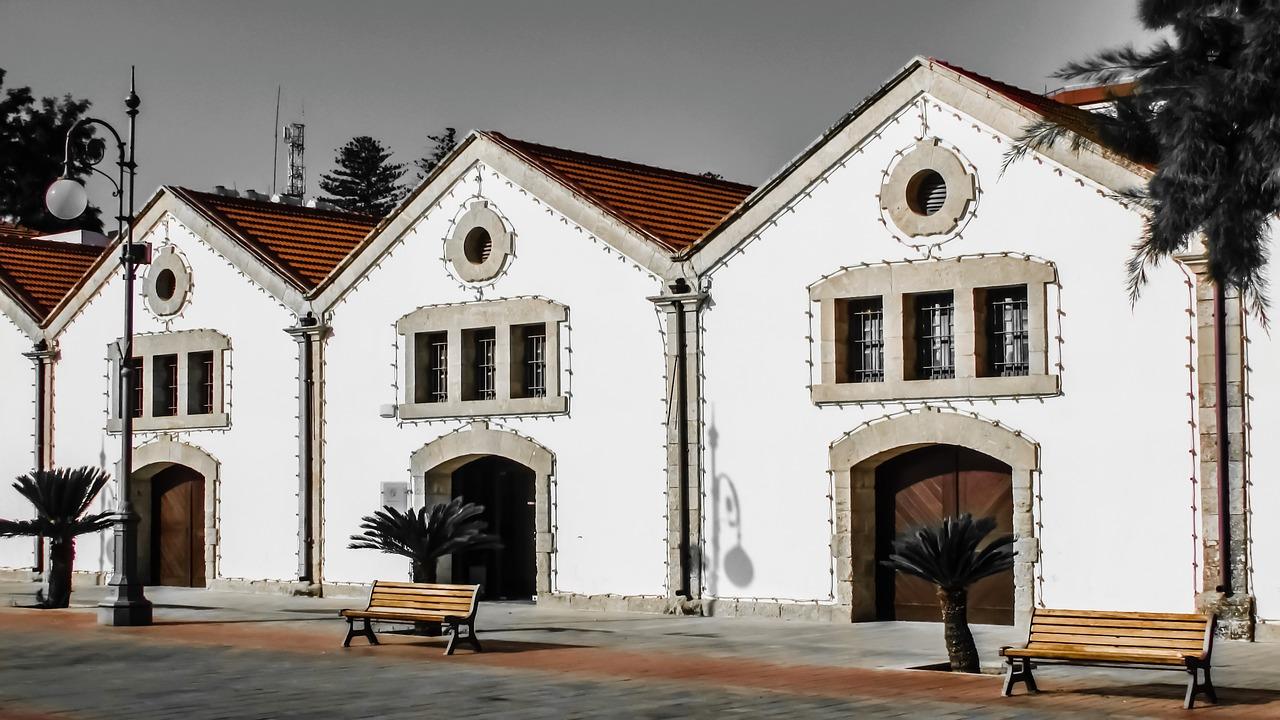 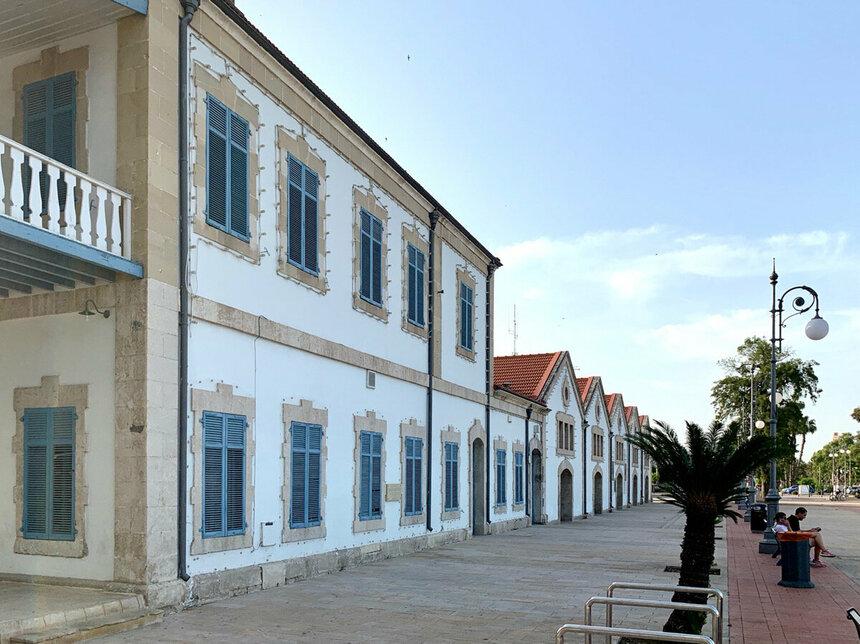 We will call this type of colonial architecture the colonial neo-Cypriot style. 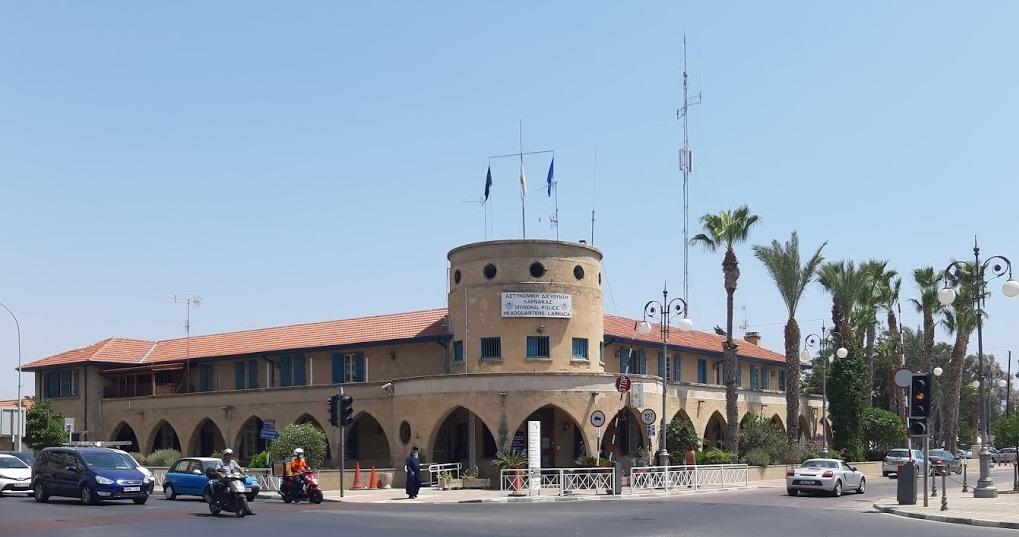 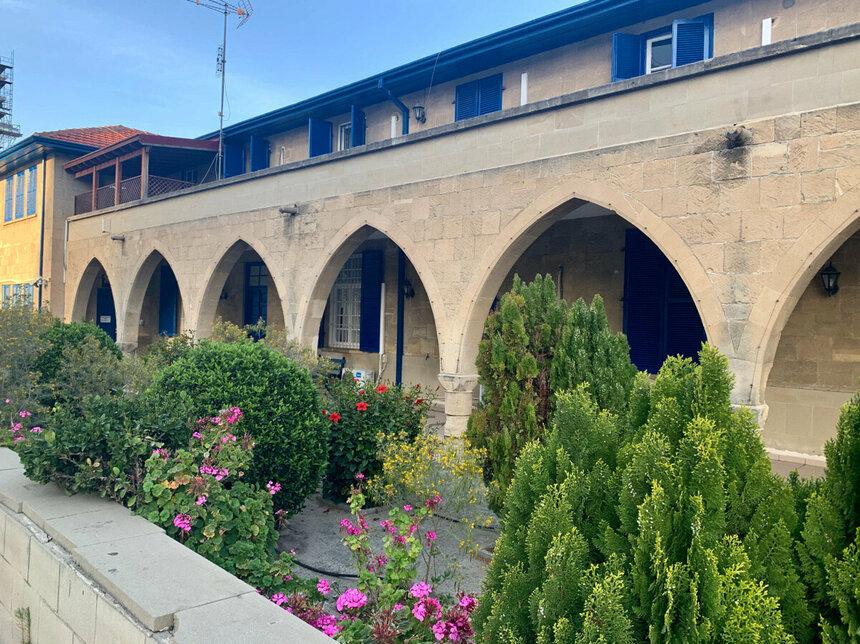 The Cypriot researchers Savvas Papasavvas and Charoula Efrem explain the presence of Cypriot traditional elements in architecture not so much by the original intention of the British to create some special neo-Cypriot style, but by the fact that Cypriot architects did not know how to build something else. 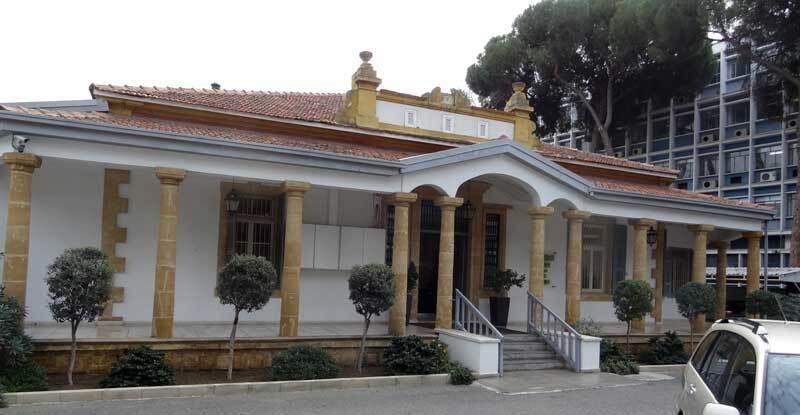 If this is true (which is very likely), then we have a rather interesting process: the new rulers of the island, who were investing in the construction of new buildings that they need for their activities, hire Cypriot architects who bring traditional Cypriot elements into the official architecture and thus create a neo-Cypriot a style that becomes the colonial style of the Anglocracy era. 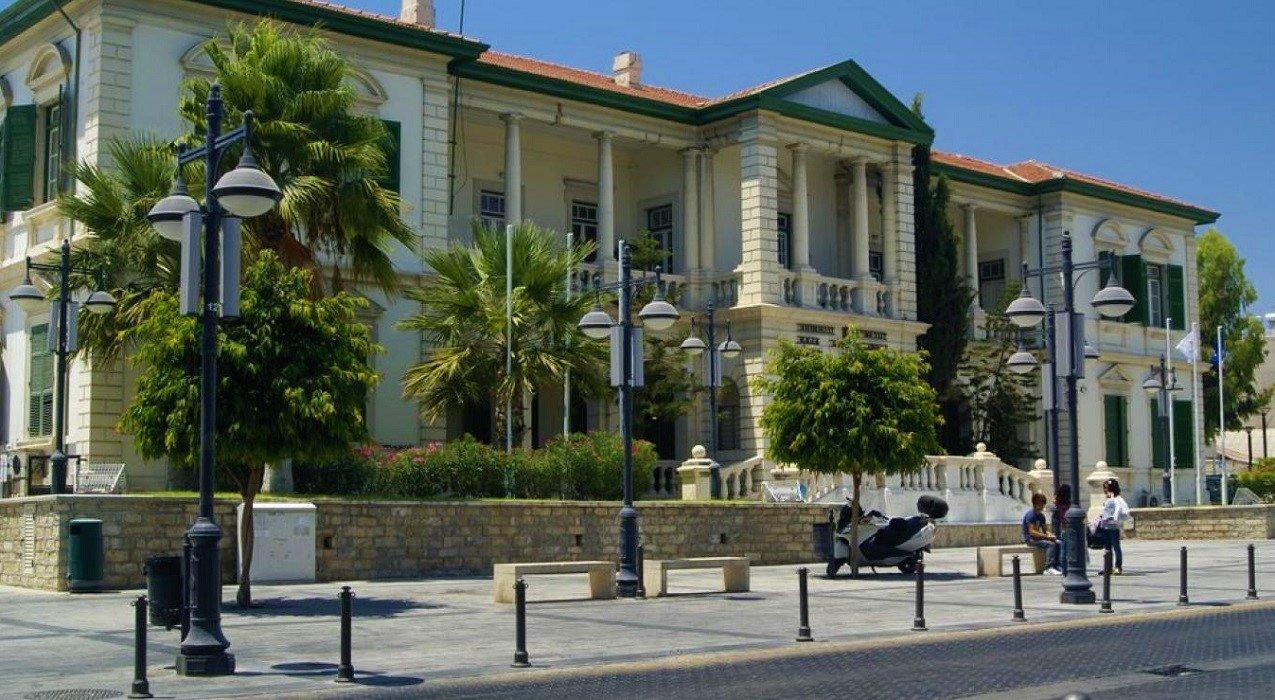 As Papasavvas and Efrem write, this style represents "pure colonial architecture" as it was formed at a later stage (around the 1920s, when Cyprus was officially declared a colony) and "cleansed" of traditional Cypriot details. 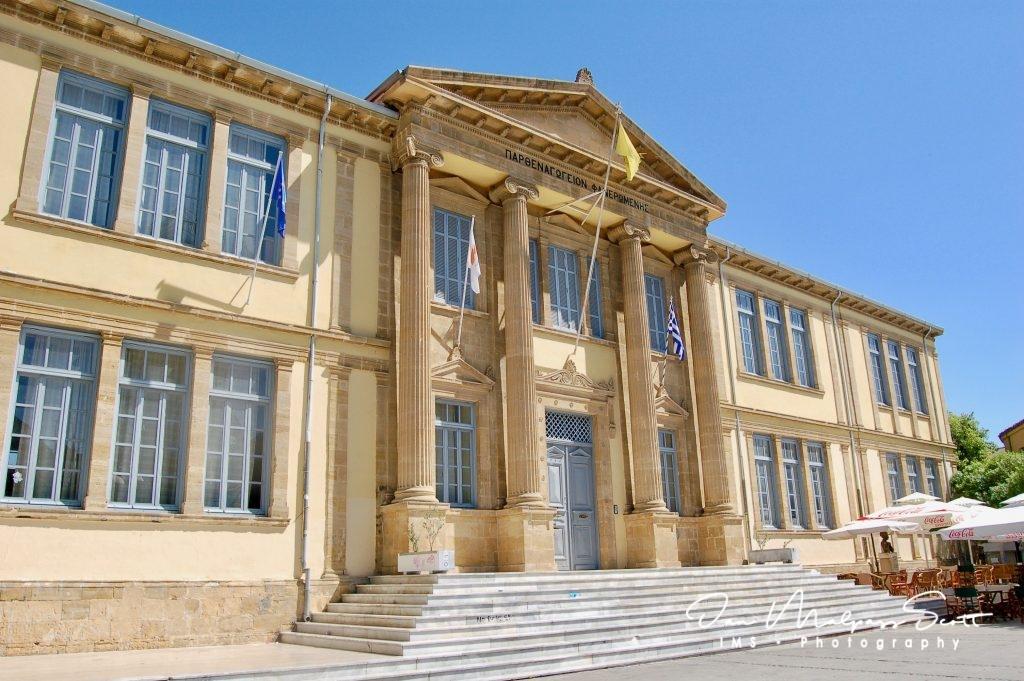 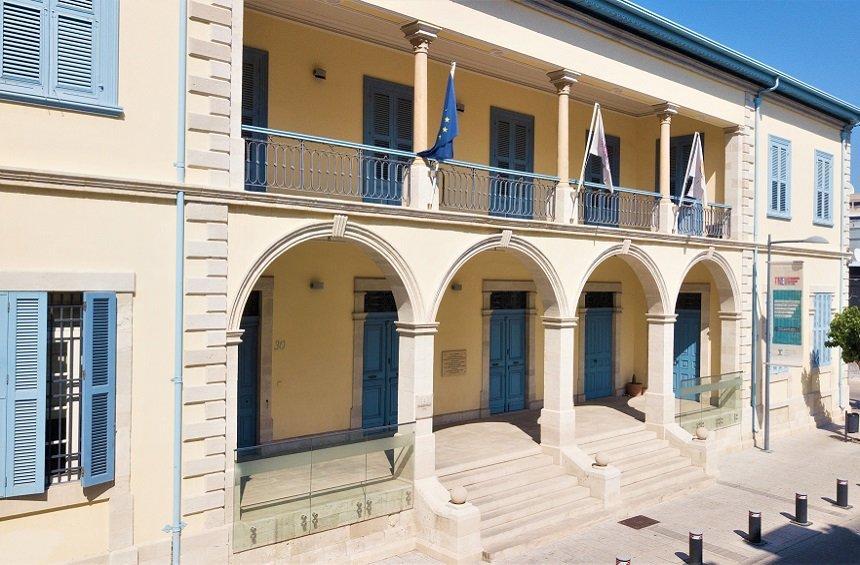 One of the TEPAK buildings (originally the residence of the Rossides family), source

One of the most prominent creators in this style is the Maltese architect Joseph Gaffiero, the author of the building of the Limassol City Hospital (today it is the building of the regional administration on Anexartisias Street) and the post office in Paphos.

The case of the Cyprus Museum

When the British took Cyprus, they initially chose the so-called "Frankish quarter" of Nicosia for their administrative buildings (from the present Ataturk Square in the occupied territory to the Paphos Gate). There was still a medieval Lusignan palace here at that time, but the British demolished it in order to build a courthouse. 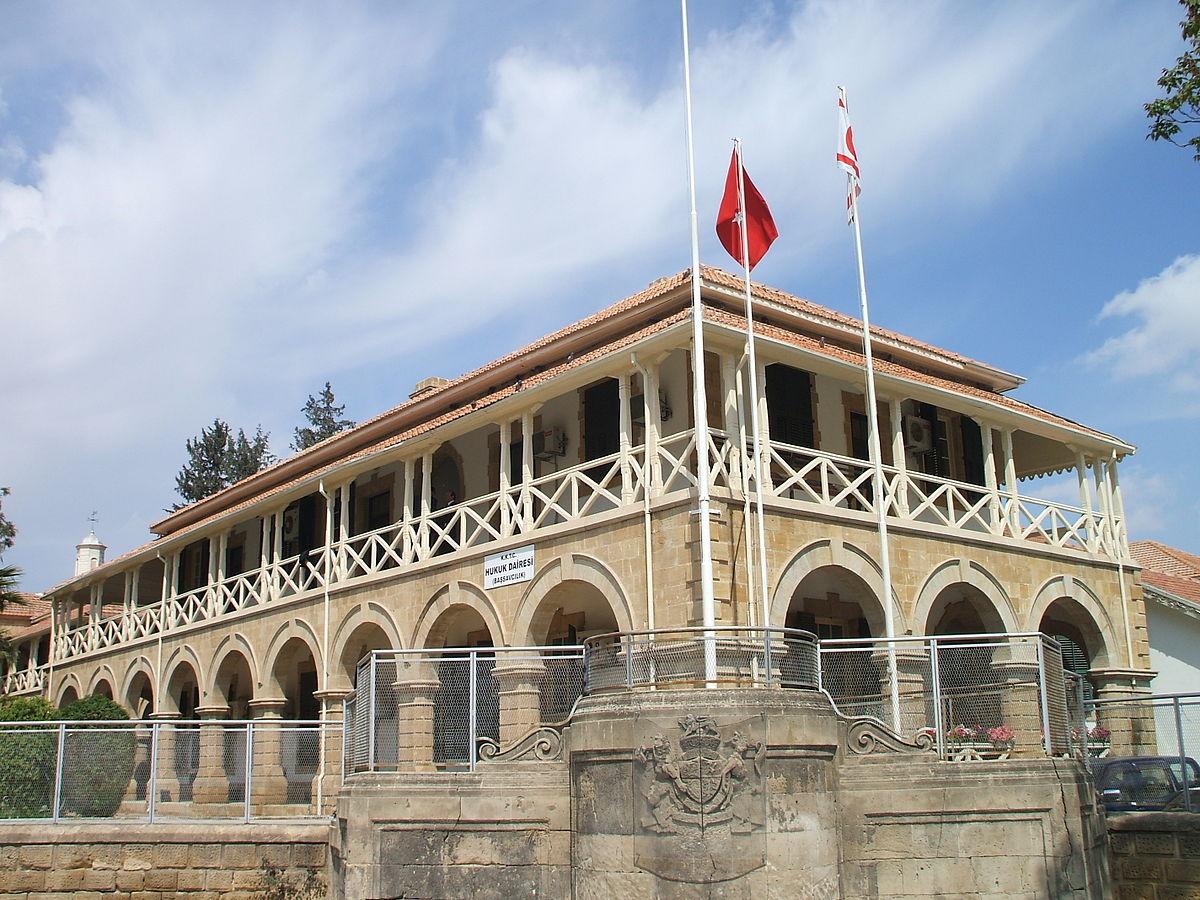 Later, the administrative quarter moved outside the city, behind the Venetian walls of Nicosia.

In order to connect it with Nicosia, the British cut a road right in the wall in the area of ​​the Paphos gate, and made a bridge across the moat (today it is Freedom Square).

Since the Europeans at that time highly appreciated the ancient culture, the Cyprus Museum became one of the main buildings of the new administrative quarter along with the cathedral and buildings for the authorities. The project belongs to the neo-Cypriot style, but has one interesting feature that is worth talking about. In 1908, the ship "Evangelistria" came to the port of Famagusta from Perea, carrying valuable cargo. The boxes with this cargo were loaded onto a train and taken to Nicosia. This load was a replica of the portico of the Apteros Nike temple on the Acropolis. This portico became the entrance to the Cyprus Museum. It is clearly visible even today, as the color of its white marble stands out against the yellow tuff background. 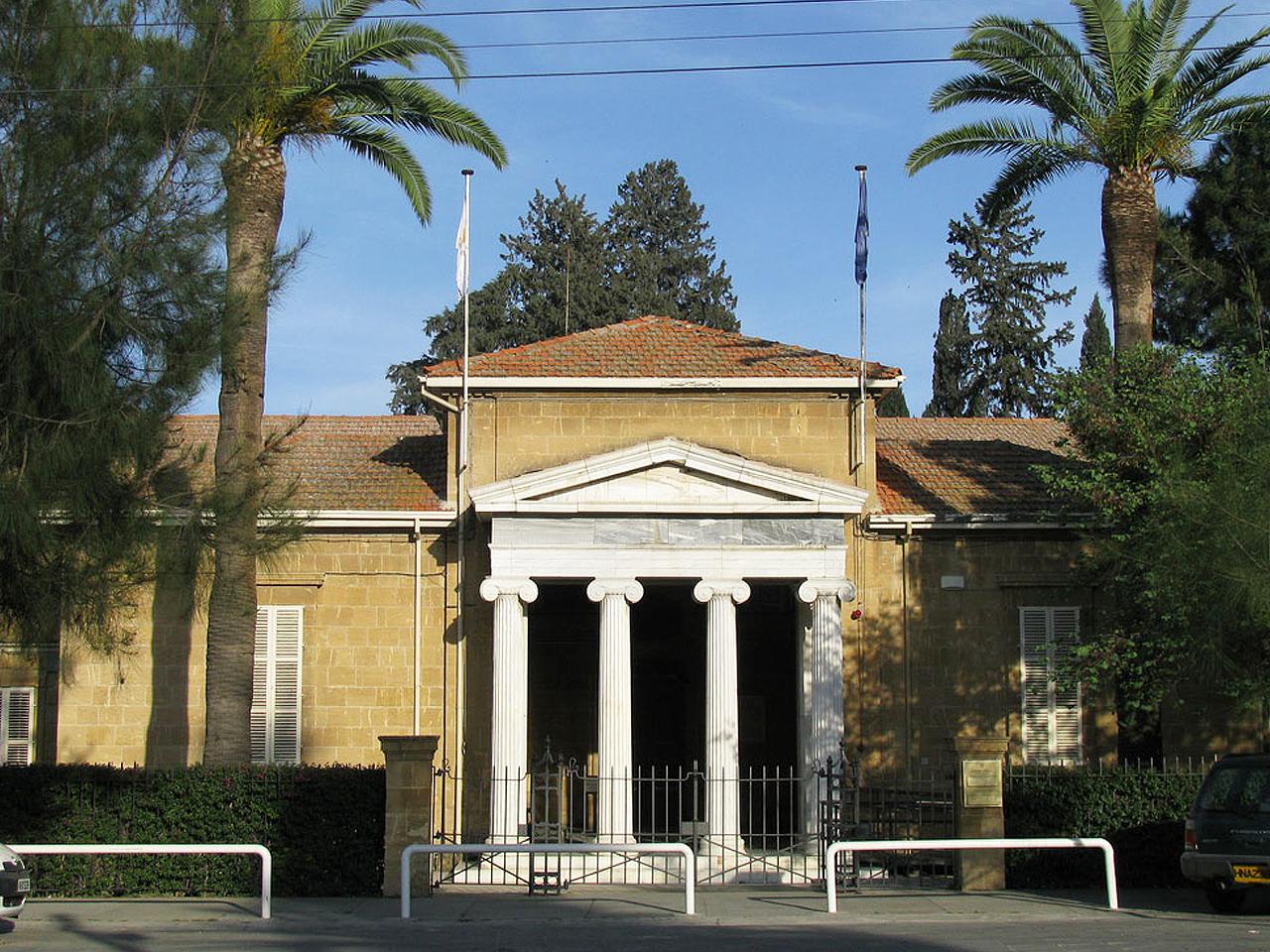 Photo from the website of the Municipality of Nicosia

Under the British coat of arms

The main façade of the Presidential Palace, which originally served as the governor's main residence, still retains the impressive size of the British royal coat of arms. It was not removed or even replaced with Cypriot, although such proposals are heard regularly. For independent Cyprus, this coat of arms is a part of history, of course, not always pleasant (for the Cypriots themselves). 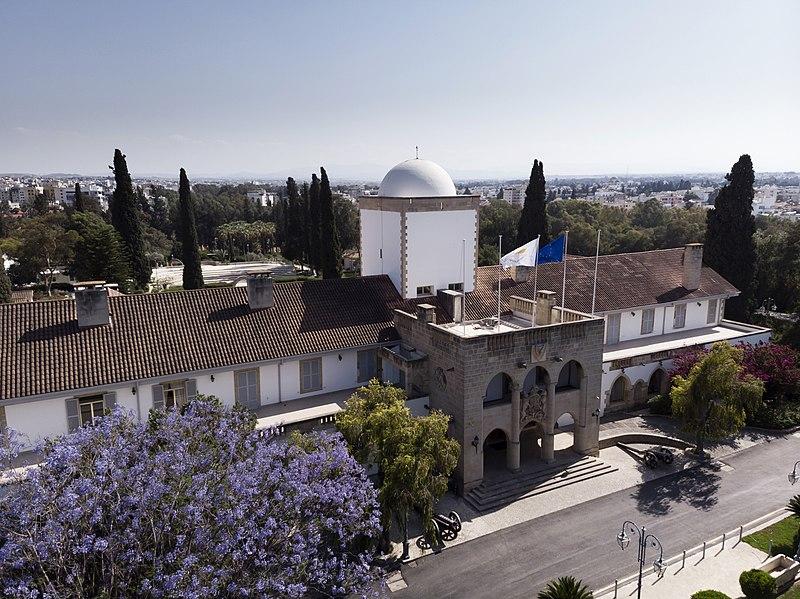 However, today it no longer carries any political significance, remaining just a spectacular architectural detail, neatly, but at the same time confidently inscribed in the arches à la the Middle Ages. This coat of arms is, among other things, a symbol of what the British brought to the architecture of Cyprus.

Interested in housing in Cyprus? Visit DOM. The portal presents the largest database of real estate in the country - from residential to commercial. Choose and contact professionals who will help you make the right choice! 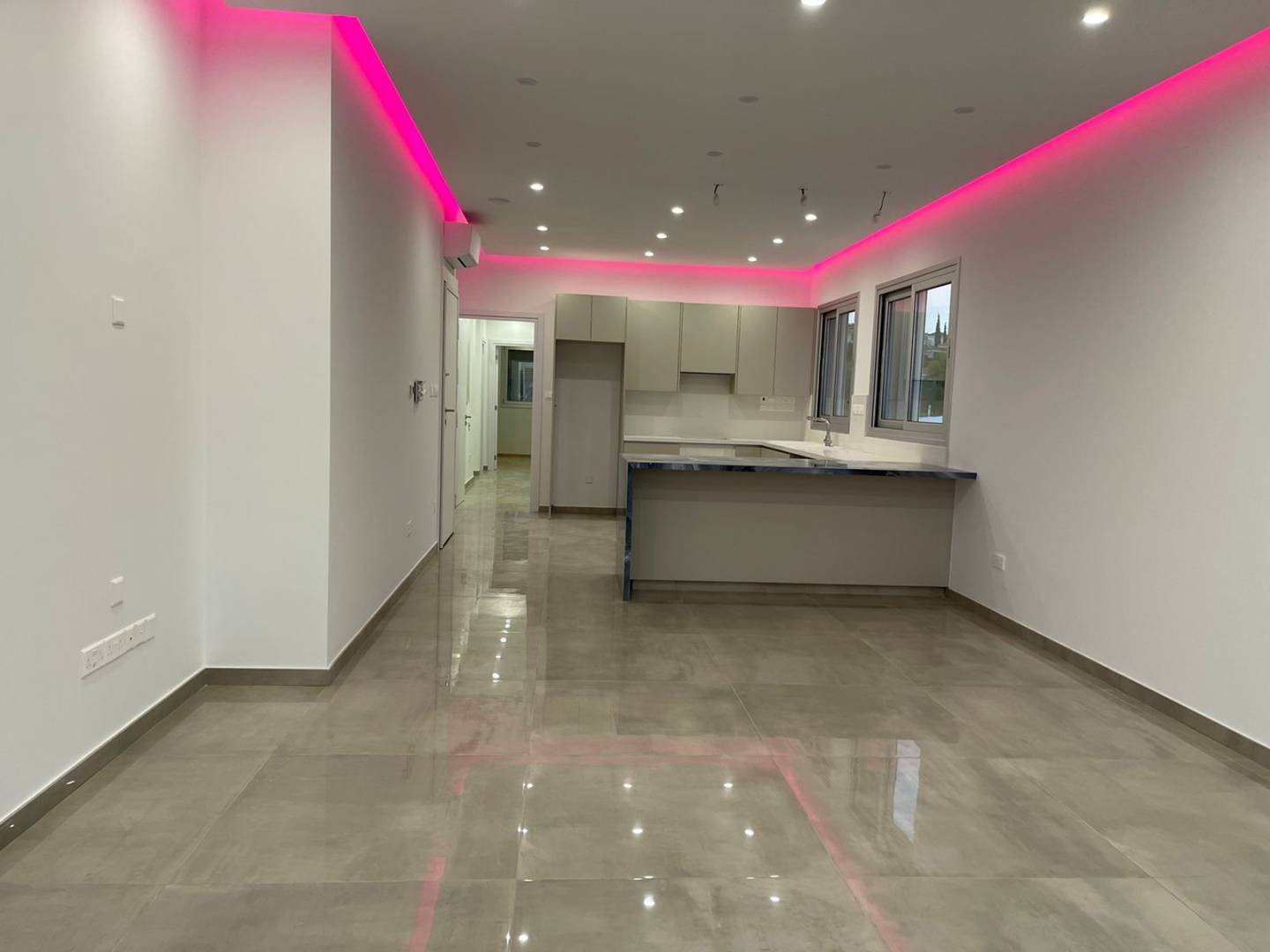 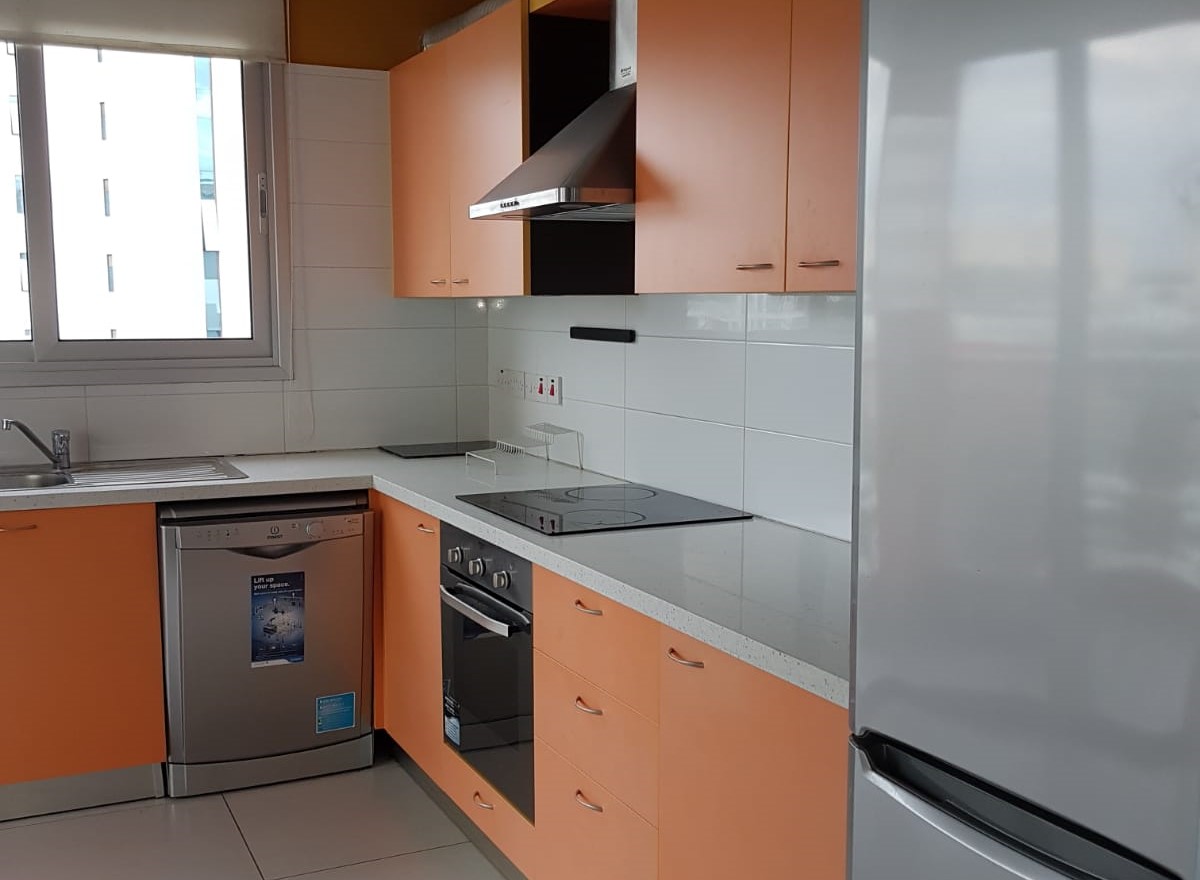 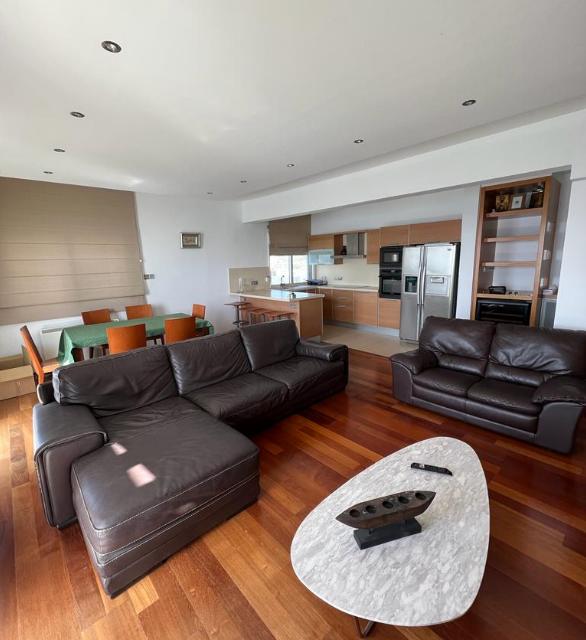 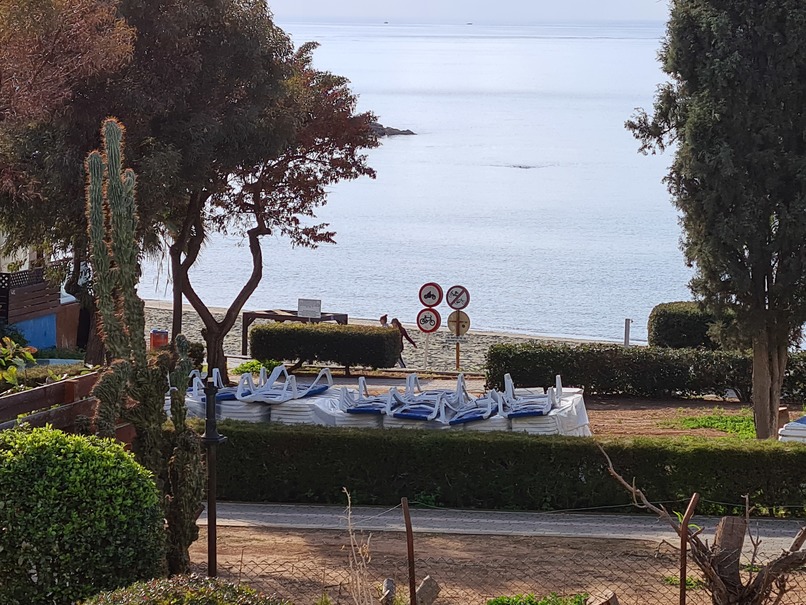 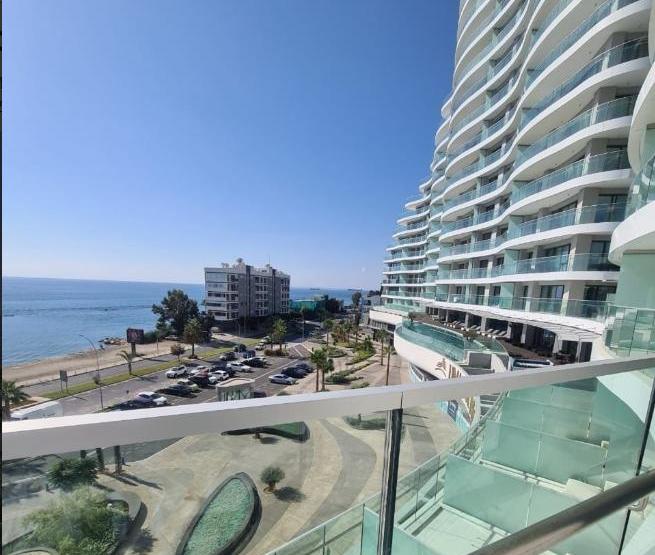 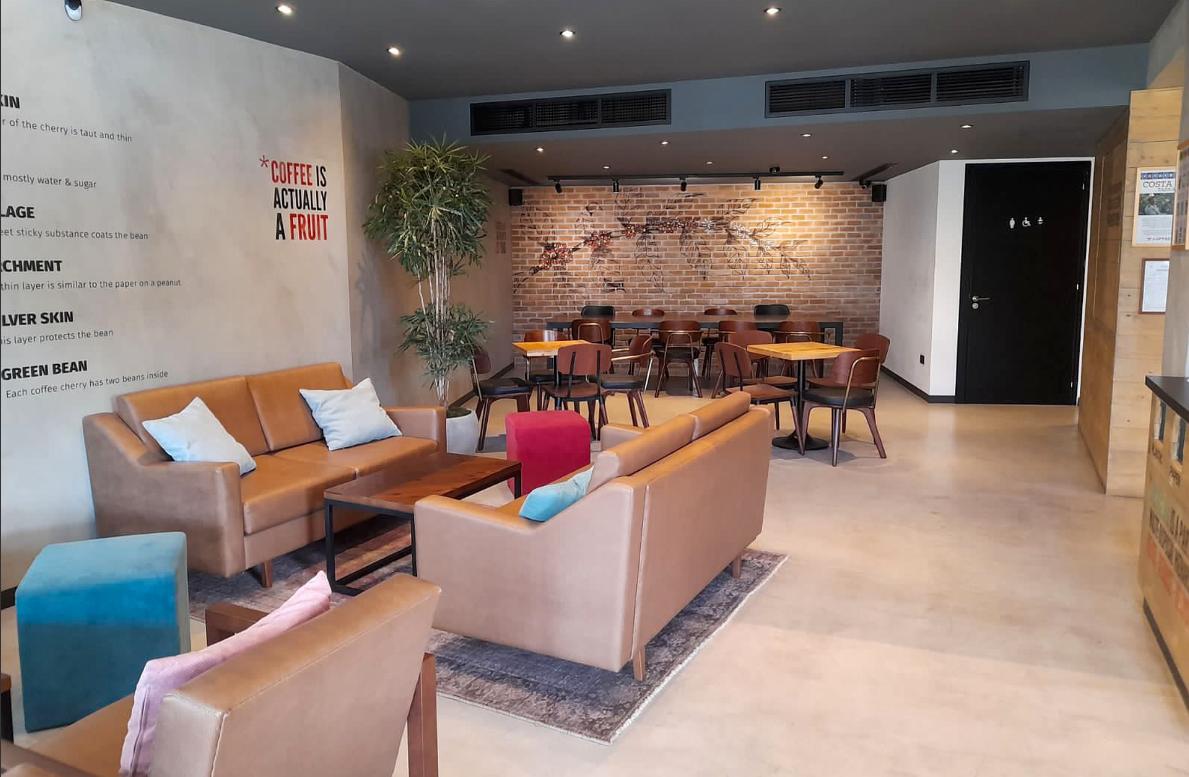 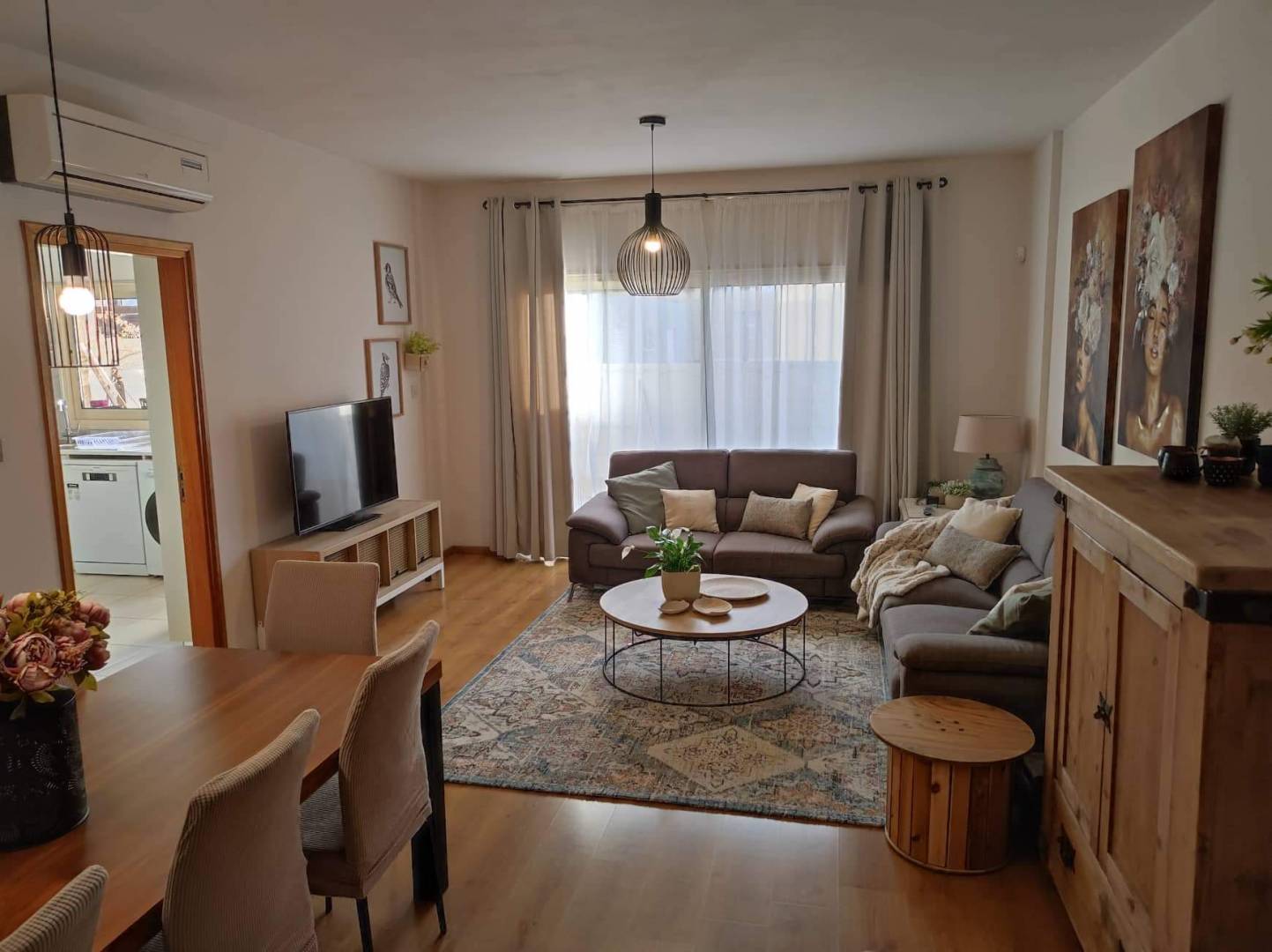 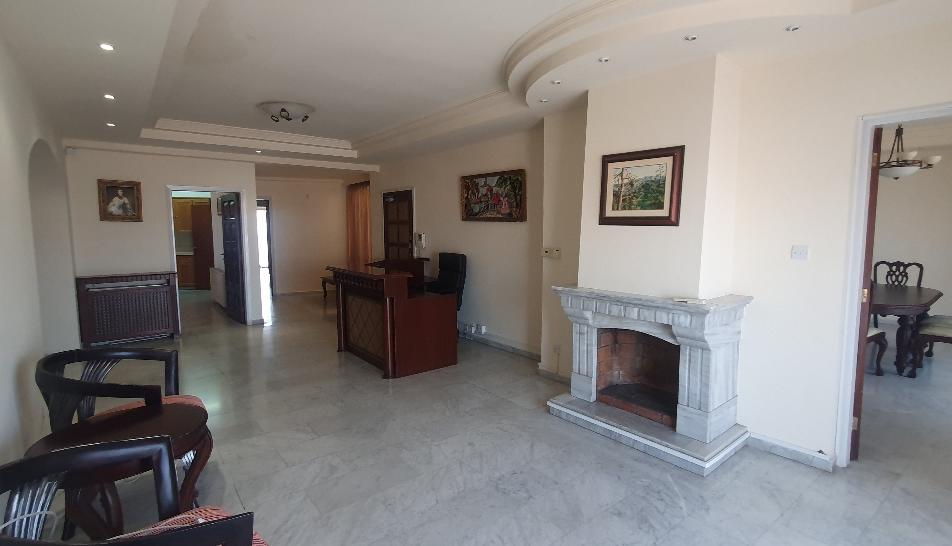 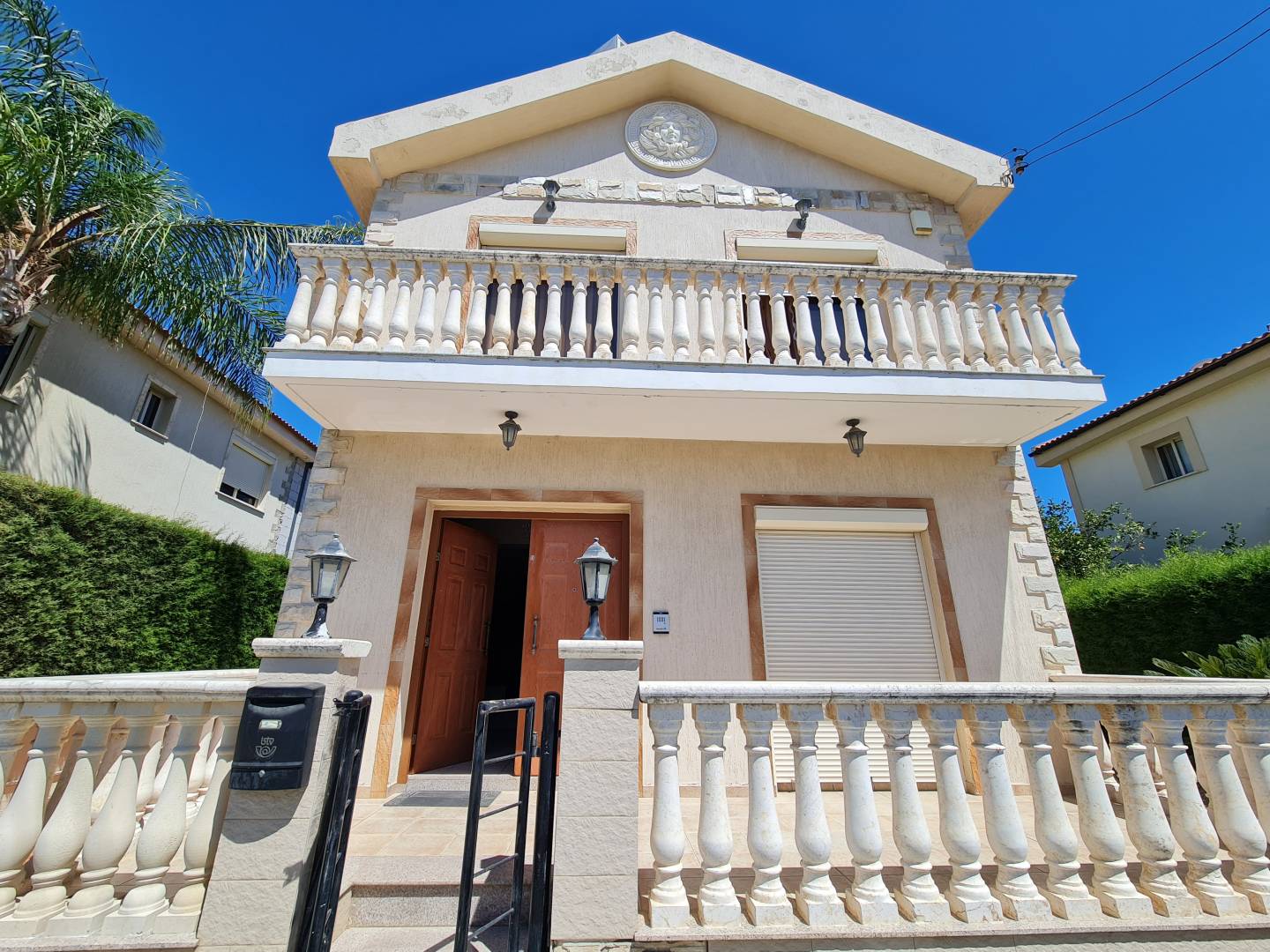