Advantages for doing business in Cyprus for Russian companies

During the event, participants discussed Cyprus's advantages for Russian companies wishing to move their headquarters to the island and the long-standing good relations between the two countries.

The head of Invest Cyprus, Michalis Michael, noted the historical and cultural ties between Cyprus and Russia and said that he hopes to strengthen business and economic relations between them further. Besides, he mentioned the concluded bilateral agreements and expressed hope for further cooperation. Finally, Michael emphasized that Invest Cyprus is available for companies from Russia to help them at any stage of their establishment and operation in Cyprus.

In turn, George Campanella's, General Manager of the Cyprus Investment Promotion Agency, recalled that Cyprus is strategically located between the three continents - Europe, Africa, and the Middle East.

Campanella's noted Cyprus' ideal investment climate and the fact that it is an attractive location for headquarters and business. The country offers a beautiful tax system and a high level of professional services. Campanella's stressed that Cyprus, before the pandemic, was one of the EU's largest developing countries. Simultaneously, he added that according to the estimates of international rating agencies, Cyprus would face a rapid recovery in the coming years.

He mentioned the high level of professional services available in Cyprus, good quality of life, low costs of doing business, and low cost of living than other European countries. Analyzing Cyprus's economic profile, Campanella's noted that the government has a substantial sector of professional services, tourism, shipping, technology, natural gas, and renewable energy. He added that Cyprus has prospects in the field of higher education.

Speaking about Cyprus's advantages, Campanella's mentioned that a country is an ideal place for multinational companies wishing to relocate and offers several financial services solutions through licensing and access to the European market.

"A typical example is the ship management sector, which is thriving in Cyprus. There are about 250 such companies based in the country," Campanella's said.

Besides, he said that the technology sector is an up-and-coming area in Cyprus. Several large companies such as Wargaming, 3CX, ETORO, and ASBIS have chosen the island as their headquarters. Finally, he announced that negotiations are underway for new companies from Europe and the surrounding area to transfer part of Cyprus's activities. 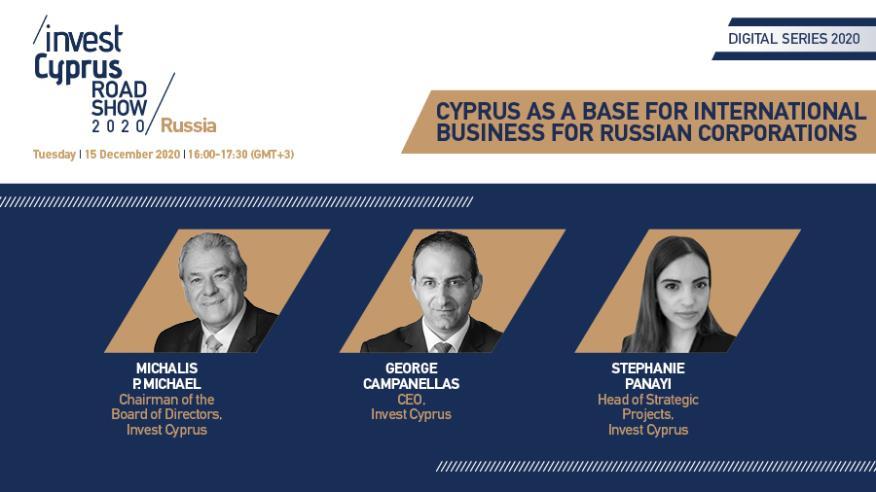 Panagi noted that Cyprus is the right place for investment, especially in tourism, healthcare, higher education, and technology. At the same time, the country has the necessary infrastructure to attract the film industry.

She stressed that conference tourism, sports, and medical tourism are actively developing on the island since significant funds have been invested in the tourism sector. She also mentioned various projects that are currently being implemented on the island. Among them: City of Dreams Mediterranean, Ayia Napa Marina, Larnaca Marina, Paralimni Marina. Besides, 16 new hotel units are expected to be built in Cyprus over the next two years.