More affordable rents are coming for the low paid

According to the data so far, COVID-19 does not seem to have adversely affected the real estate market. The buyers' intention postponed for a few months. The purchase transaction completed late, said in an interview with InBusinessNews, the President of RICS Cyprus and its director AHIA Chartered Surveyors, Thomas Dimopoulos.

Among other things, Mr. Dimopoulos expresses the assessment that if companies' practice continues with the implementation of distance work and the trend of consumers for online shopping, then we will see a reduction in rents in offices and commercial real estate. He also predicts that housing rents will become more affordable for low-wage earners due to Airbnb property owners' damage due to the pandemic. Finally, it calls on land development entrepreneurs to realize the need for affordable housing and reshape their products accordingly. 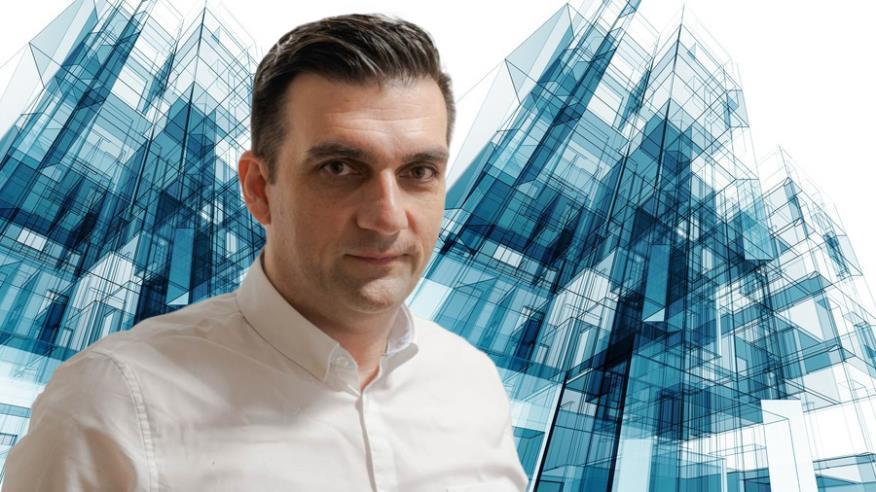 How did the pandemic affect property sales prices (residential and commercial) throughout Cyprus (prices in general by category and province)?

It is still too early to talk precisely about the effects of the lockdown and the pandemic more specifically. To make a more detailed analysis, we tried to analyze the sales data as published monthly by the Land Registry and compared the corresponding months of 2019. The results are shown in the table below: 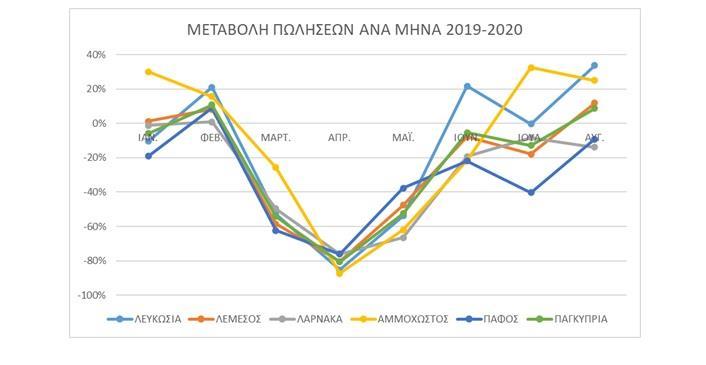 The X-axis shows the months, while the Y-axis shows the percentage of change. The results are expected since there is a large percentage drop during the months of the lockdown. In my opinion, both state services and banks and private services (appraisers, real estate agents, lawyers) were underperforming. With the resumption of economic activities, the percentage of sales seems to increase compared to the corresponding months of 2019. However, it should be mentioned that the year 2019 was the best in terms of transactions of the last decade. At first glance, we see that in most provinces (except Paphos), the buyers' intention was postponed for a few months, and the operation was completed with a delay.

Going even deeper and examining the total amount of transactions concerning the corresponding month of 2019, the following table emerges: 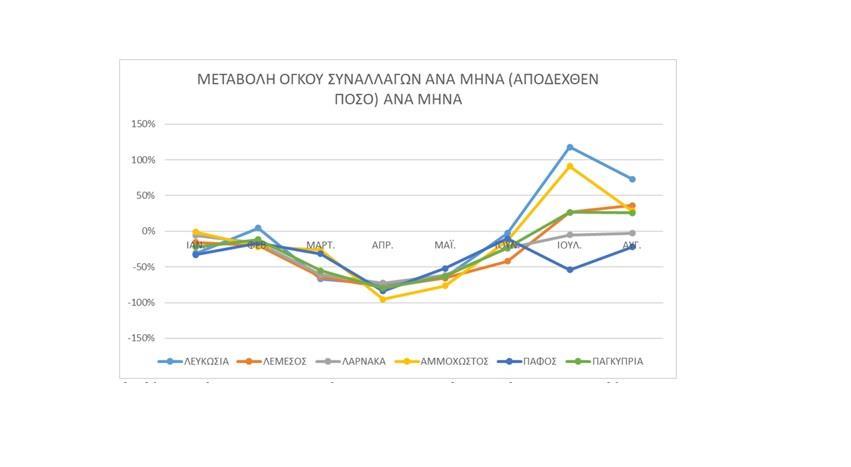 The conclusions are similar in light of the analysis of the monetary volume of transactions. The most characteristic is the trend shown by Nicosia, whose Real Estate Market is the most stable over time and presents the smallest fluctuations in other Provinces.

To what extent has demand and availability been affected?

As I mentioned before, it is too early to draw safe conclusions, and to see the real impact on demand and availability, data over a more extended period needed. A similar study will make absolute sense after two years.

In general, however, we should not forget that traditionally in times of crisis, investors prefer to buy real estate, shielding their money. Other reasons for the shift of investors to real estate are the low mortgage rates (the lowest of 20 years), the practically non-existent deposit interest rates, and the lack of alternative forms of investment since the stock market's interest is at an all-time low. 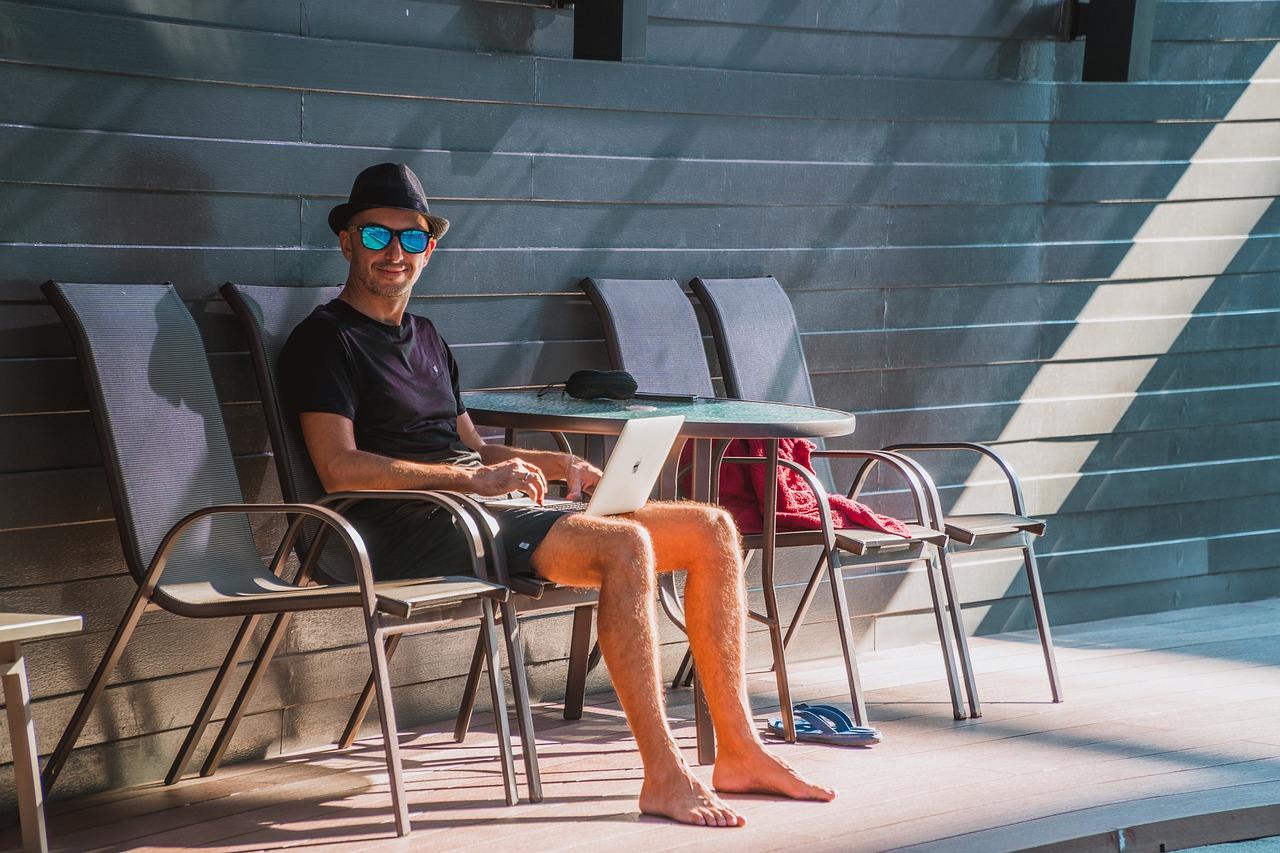 Has the outbreak of the coronavirus affected rental prices, both residential and commercial? How are prices shaped today?

The pandemic has positively affected several property categories. In my opinion, COVID-19 acted as a catalyst for acceleration in that direction. Globally, we see everything related to sharing economies flourishing, and the changes are enormous. Given the technological developments and the speed of the internet, the traffic on the streets, and the lack of public transport in the big Cypriot cities, it was inhumane for the average worker to spend up to two hours a day commuting to and from work. So many workers with great relief agreed to work two or three days a week from home.

On the other hand, given that we will be home for more hours, the demand for quality and more residential space increases. In contrast, accordingly, the demand for warehouses and logistics should increase to meet teleshopping needs.

What are the housing options for students right now?

Is there accommodation available in student dormitories? An essential part of the real estate market is the properties intended for students. They are usually low cost and of moderate quality, and give relatively high yields. For this reason, many investors, including private universities, have invested in this category. The increasing rate of private and state universities in Cyprus in recent years and their establishment has attracted many international students, who rented these units. I would expect that the surrounding atmosphere and especially the fear of moving and the family's distance may prevent many international students from enrolling in the Cypriot Universities this year until the coveted vaccine. 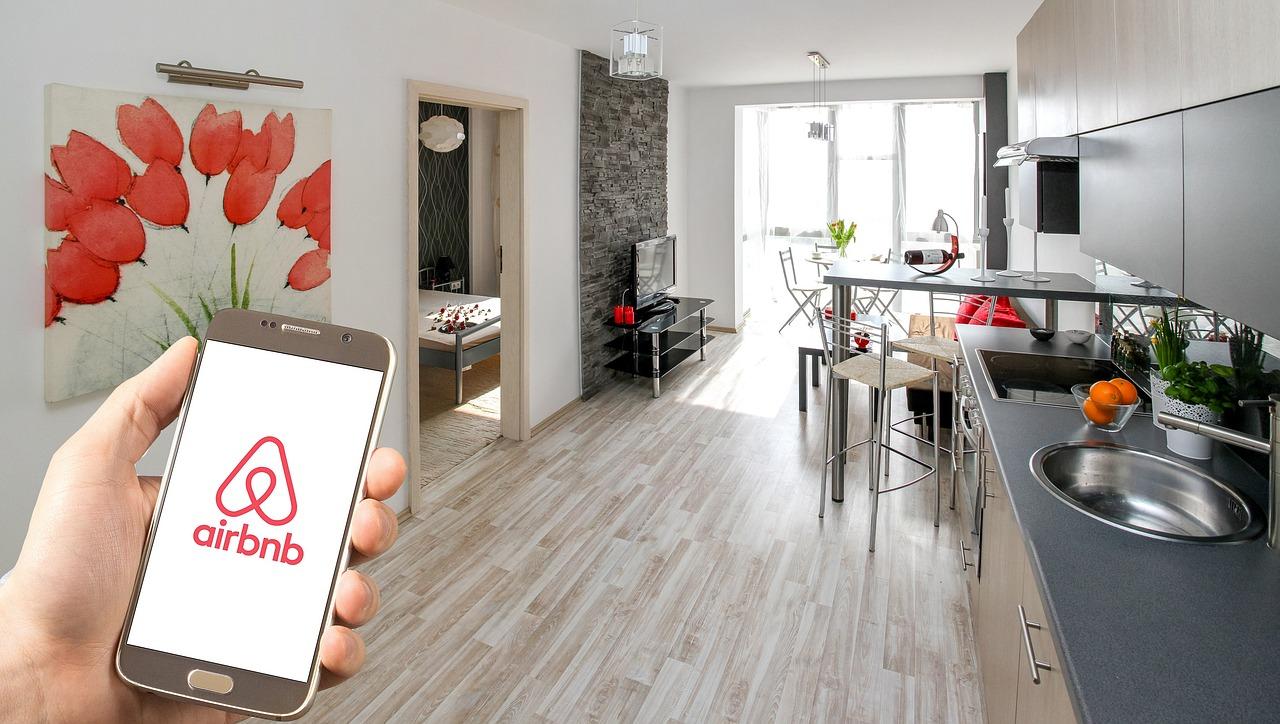 In recent years we have seen an increase in real estate leasing in Cyprus through the Airbnb platform. How is the demand for these properties being formed today during a pandemic?

How do the owner's act? They bought and renovated old units or offered new units with short-term rental status. The yields were almost always in double digits and in some cases they even reached 20%, always depending of course on how the owner-managed the units. With the dramatic decline in tourism, it is a natural consequence that the demand for these units will decrease, and the yields will fall significantly. Some landlords, especially those who have entered into this type of investment in the last two years (without reaping the significant returns of previous years), seem to be shaking up and owning the property on a long-term lease.

How is the demand for luxury apartments and houses in Cyprus?

Has the pandemic affected the demand from foreign investors? Special reports have been made in recent months on this issue and regardless of the epidemic. Top and unfortunate moment, a documentary of the Al Jazeera network connects these investments in Cyprus with money laundering. Reputable global organizations such as RICS have recently reported similar phenomena even in very mature real estate markets such as London. The organization's article is entitled "Real estate and money laundering: partners in crime?". With the above, I want to say that the above documentary was made purely for impressions without wishing to downplay the fact and the reports that it happens in several cases.

So in the first eight months of 2020 and despite the restrictions on travel, the three months lockdown, real estate purchases by foreigners are practically at the same levels as in 2019. The table shows that foreigners' interest in real estate in Paphos and Limassol has been strengthened in Larnaca and Famagusta. Although Nicosia seems to be a pioneer, the number is considered fictitious due to the minimal number of transactions. It is noted that the table has a total number of transactions and does not separate luxury properties.

Do Cypriots dare to buy a house during a pandemic?

In closing, this brief report says that I do not see any hesitation on the part of Cypriot homebuyers for homeownership purposes. Indeed, job uncertainty exists and worries many, but on the other hand, the need for housing exists and must be met. The point here is for land developers to realize the need for affordable housing and reshape their products accordingly.