Which Areas Are Popular To Live In Paphos

It is often asked: what are the most popular areas for buying real estate if you are foreigners? Of course, if we are not talking about personal preference and prices.

If we are, there are detailed descriptions of projects from developers or of secondary real estate on the websites of realtors. Everyone decides the question of what is desired and what is acceptable for himself, based on goals, capabilities and tastes.

You know that different people prefer to live in different places. Sometimes, too strange places...

Another thing is that each area is characterized by the type of housing, international community, etc., which affects the attractiveness, and hence the value of real estate. 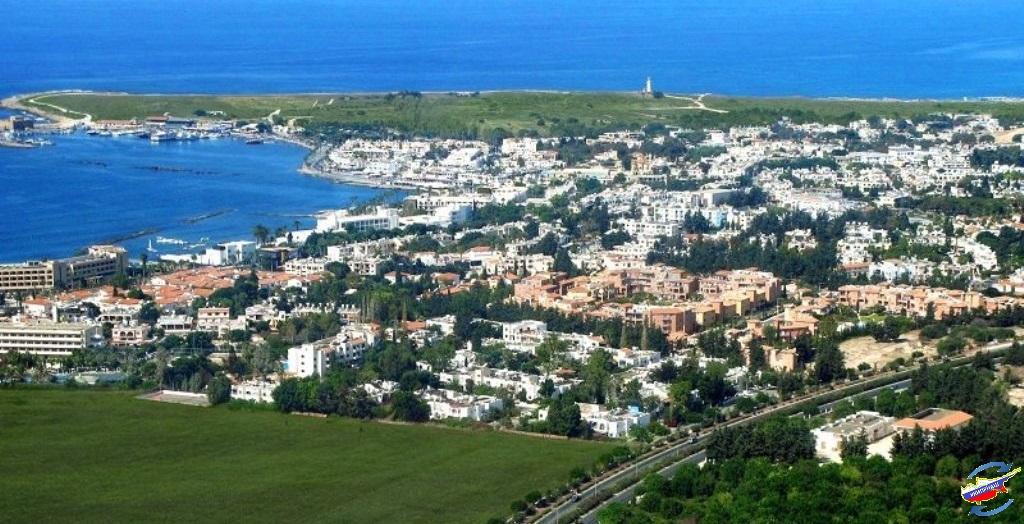 Kato Paphos is located very close to the harbor. The resort activities are concentrated here: bars, restaurants, taverns, cafes, souvenir stores, and other shops. There is a nice promenade stretching along the beaches of the hotels in the tourist area up to Geroskipou. The sandy beaches of the hotels and the Municipal Baths are right here.

The buildings are a little old (early-mid 90s). Only recently, a few small modern apartment complexes have appeared. The construction of a plot opposite the city beach SODAP has begun, where, in addition to luxury apartments in multi-storey buildings, detached villas are expected.

The population here is very specific. Firstly, this is a permanent flow of tourists who come here for a weekend or a week or two and have fun in full. Secondly, the international staff of shops and taverns serving tourists are tenants of the real estate here. The rest are a few “summer residents” who come to the sea for only 3-4 months a year.

The infrastructure here is quite specific as everything here is for the needs of tourists. More than half of the facilities are closed by the end of October and you will hardly meet people on the streets. By spring, everything comes to life again... Actually, this is not a problem as the city is compact and you can always get to any store or other facility in 10-20 minutes. 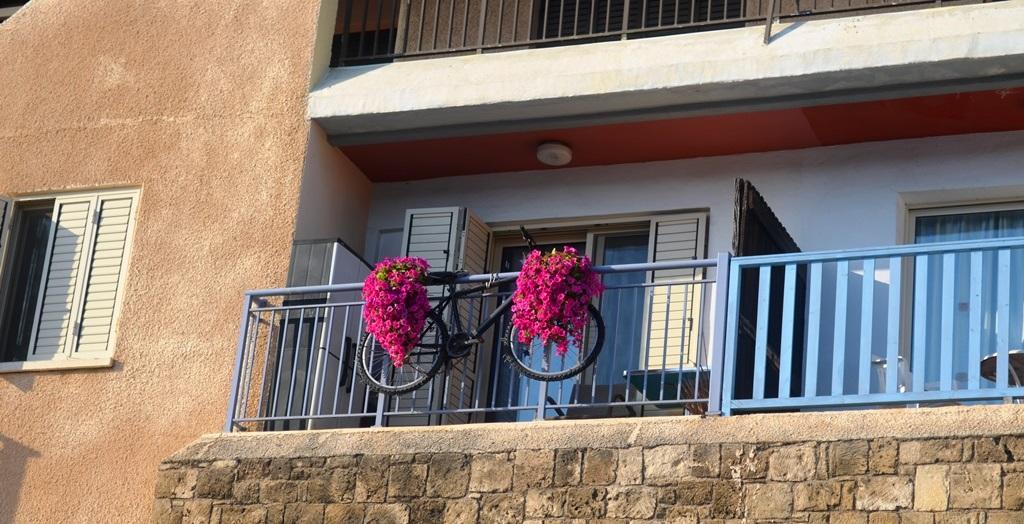 CONCLUSION: Kato Paphos should be considered either as a "summer cottage" option for a stay of 3-4 months per season and short visits throughout the year, or as an investment for renting out. 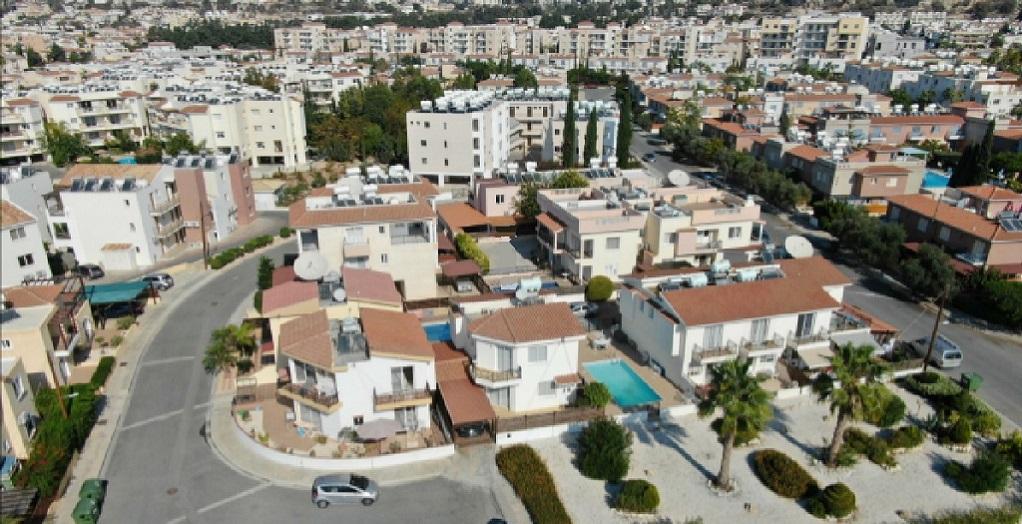 This is the area located northeast of Kato Paphos and is bounded by Spyrou Kyprianou Avenue on one side, and by Europa Avenue, which separates the city from Geroskipou, on the other. Not a big area, which is built up mainly with apartment complexes in 2000-2012. The animal shelter, which is largest on the island, is a small disadvantage, but soon they promise to relocate it somewhere outside the city.

The real estate here are comfortable and modern buildings with communal swimming pools, which are especially important in the hot season, when walking to the beach (20 min one way) can be a problem.

The population here is quite homogeneous. There are, of course, a number of tourists who booked apartments with a kitchen through services like airbnb. But most of them are pensioners from prosperous countries and people of middle class.

The infrastructure has everything for a comfortable "summer cottage" life. The only thing that is perhaps missing is modern gyms within walking distance. Unless they are provided in your complex. 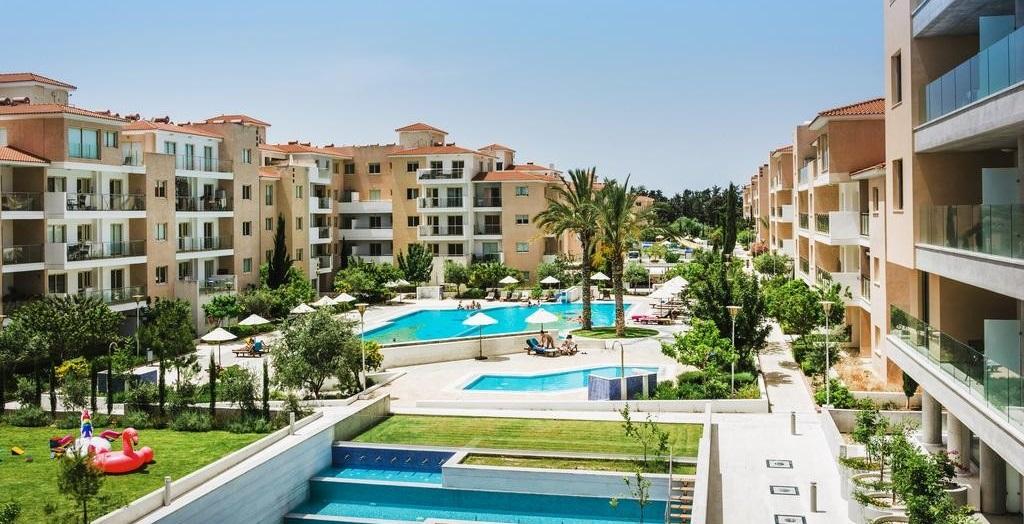 Summary: Universal is suitable for those who do not need daily trips to the beach. Who needs a calm, measured life in the immediate vicinity of the center of Paphos with its infrastructure and entertainment. 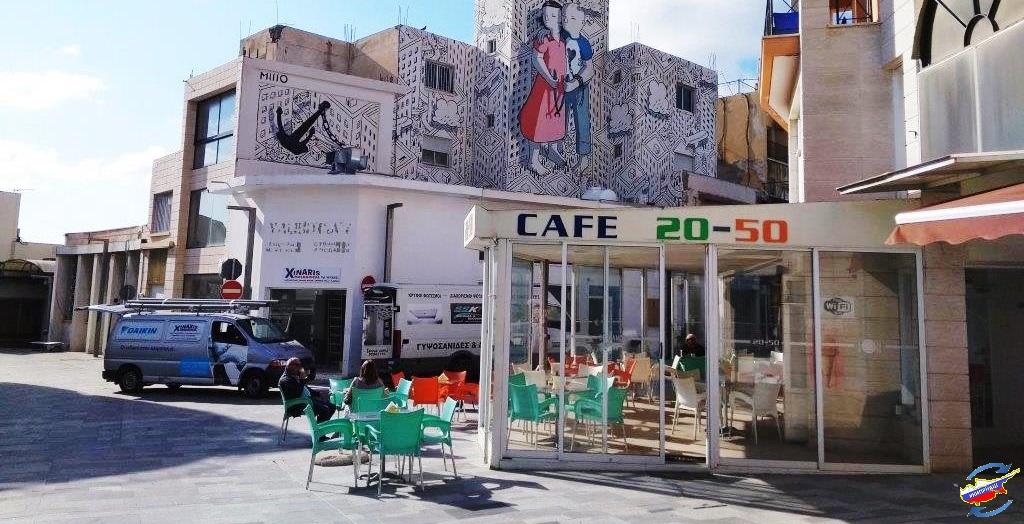 The name speaks for itself. Here are the City Hall and the Ethnographic and Archaeological Museums. Most recently, when Paphos was declared the “European Capital of Culture 2017”, the quarters of the Old City have undergone major reconstruction and restoration. Communications were laid, the roadway and sidewalks were paved, modern lighting was installed and landscaping was renewed. Albeit with a delay, but these quarters have taken on a very attractive appearance. There are many shops, salons, cafes and restaurants. The city theater Attikon has been reconstructed and operates.

Building. The old town was built up, as the name suggests, a long time ago. For the last 20 years, there has been practically no construction of modern buildings. Therefore, finding something that meets modern standards will not be easy. Nevertheless, a significant part of the housing has undergone renovation and has become quite suitable for comfortable living. And the construction of modern complexes resumed in this area several years ago.

There are mostly old buildings (80-90s) in the direction of Kato Paphos, but also a small number of 5-10-year-old quite modern apartment complexes.

Population. The Old Town is inhabited mainly by locals.

The population in the lower part is a little different. There are not only Cypriots, but also Pontic Greeks who moved to the island in the early 2000s. A significant part of housing is rented by immigrants from Eastern Europe, who came here for better a life.

The infrastructure meets all modern requirements. There are large chain supermarkets, as well as many specialized stores selling clothes, appliances, other household goods and even cars. There are offices of the biggest banks and insurance companies operating on the island. The Karavella bus station located here connects Paphos with all corners of the district and the largest cities of the island. 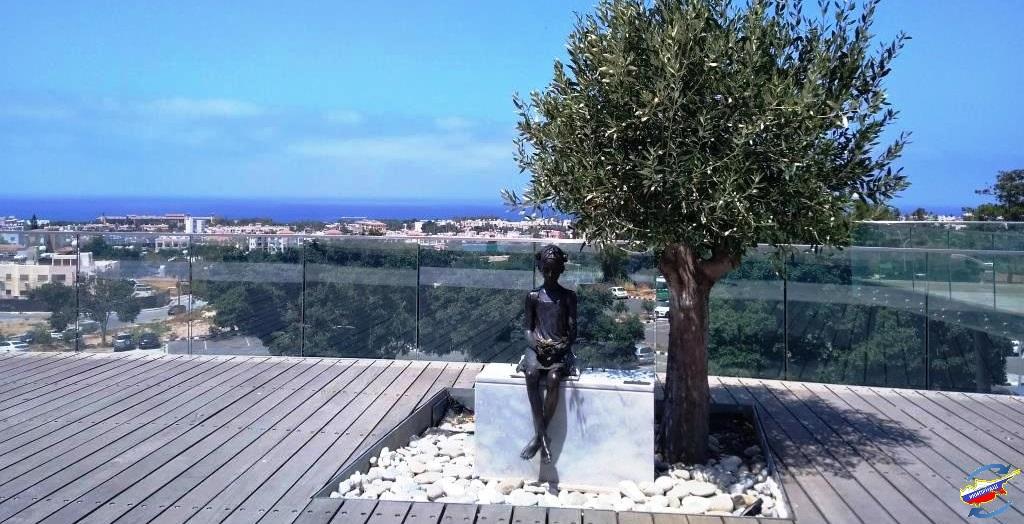 CONCLUSION: The Old Town and Exo Vrysi are currently of little interest among those who want to buy or reat property. However, there are plans to revive their attractiveness and further improve them. Several interesting multi-storey office and residential real estate projects were launched before the outbreak of the pandemic. Therefore, this place can be considered if there is a desire to make a profitable investment.

Tombs of the Kings 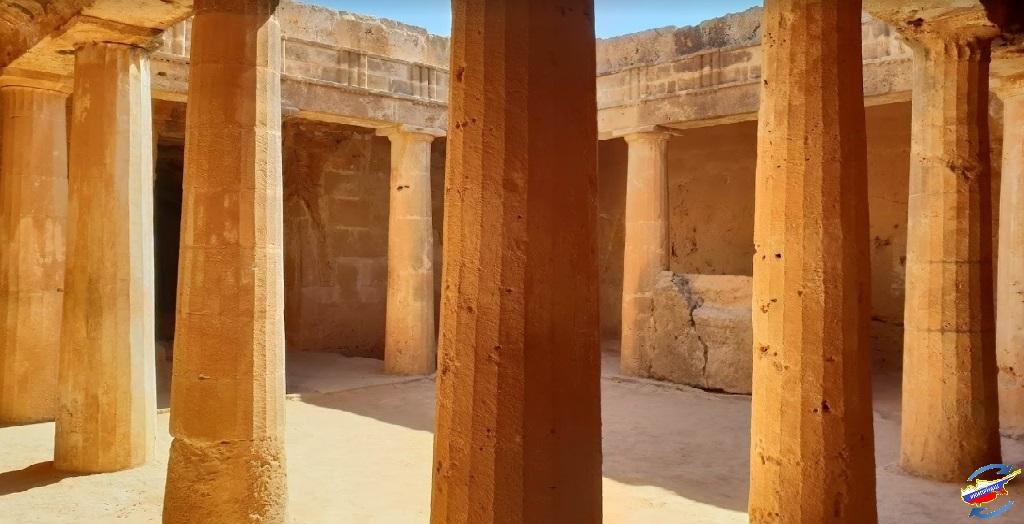 This neighborhood stretches along the coastline in a westerly direction from Kings Avenue Mall to the Aspire Private British School. There is a similar tourist area here as in Kato Paphos: the largest shopping center in the city, many karaoke bars, the smell of burning souvla from taverns, souvenir shops and real estate offices. There is a sandy municipal blue flag beach on the promenade from Cape Foros to the Tombs of the Kings. There is another recently renovated beach with breakwaters in the area of ​​Venus Beach Hotel. As the name suggests, part of the coastline is occupied by the ancient acropolis which is popular with tourists.

The property development is very peculiar. Along with low-rise apartment complexes built in 1990-2019, there are a lot of townhouses and small villas. In close proximity to the sea, several complexes of modern high-level residences have been recently built.

The population depends on the specific location. There are quiet areas of private houses, only half of which the owners live in all year round. The other half is used for short term seasonal rentals. There are tourists staying in small pensions and family hotels.

A little far from the beach real estate is mainly used year-round.

The infrastructure is slightly less specific than in Kato Paphos. However, outside the tourist season, most of the facilities are closed. 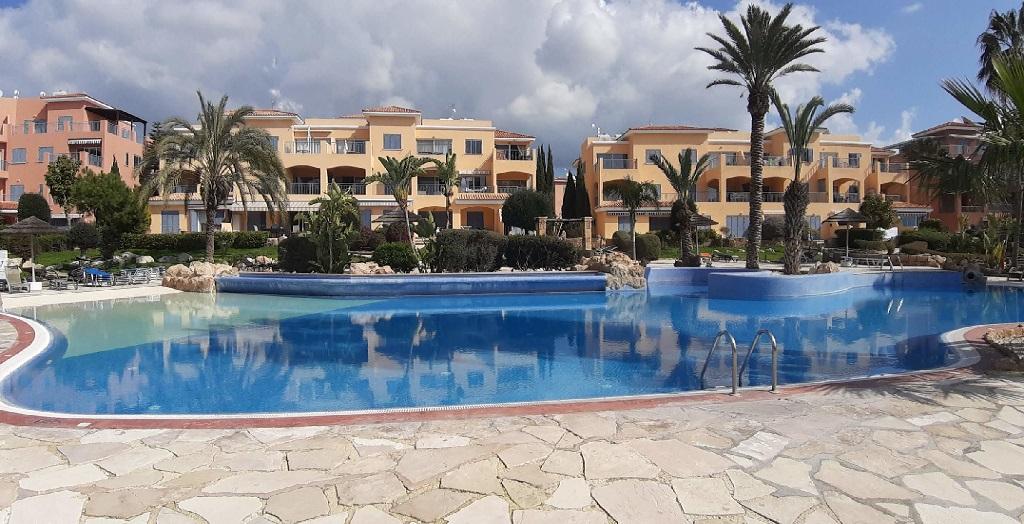 Summary: coastline of the Tombs of the Kings, as well as Kato Paphos, should be considered as a "summer cottage" option, short visits throughout the year and as an investment for renting out. At a short distance from the sea, it is possible to find decent options for year-round living. 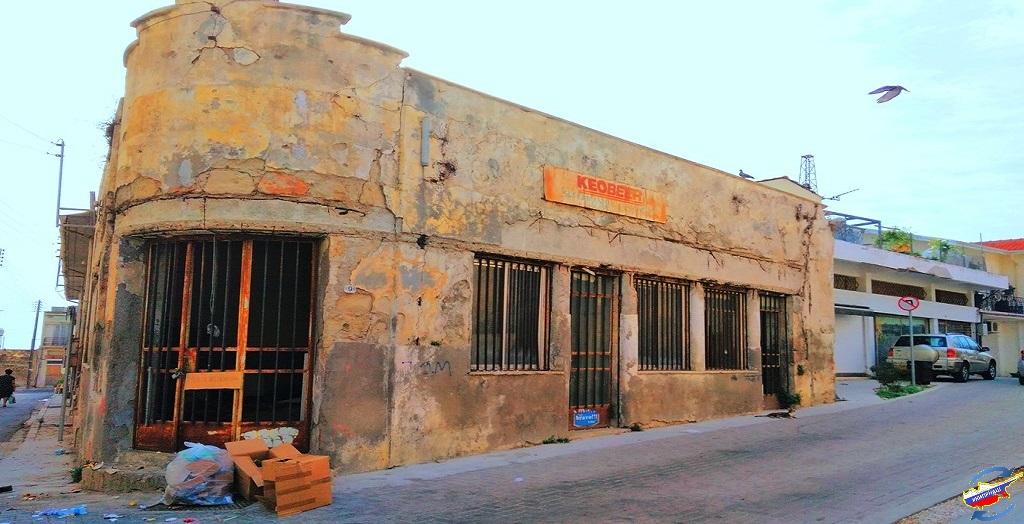 Melanos is located between the Tombs of the Kings and the suburb of Chloraka, it is popular among the British, and more recently among the wealthy Chinese. An enchanting sea panorama opens from a gentle slope, on which residential complexes and private residences are located. There are no good beaches within walking distance. People who live here prefer swimming pools. But if you want, you can always get in the car and swim in the sandy beaches of Peyia and Geroskipou in 10-15 minutes.

Moutallos is located across the ravine towards the Old City. Until 1974, a Turkish-speaking population lived here. After the well-known events, it was settled by refugees from the North of the island. Due to these circumstances, for a long time new construction was not carried out here. However, in the past few years, the road network has been significantly improved and many buildings have been restored.

Building. If Melanos continues to be built up by modern residential complexes and high-class residences, then Moutallos is quite specific. Its streets sometimes resemble Istanbul. Much of the land is still owned by Turkish Cypriots, so new construction here is difficult.

Population. Melanos is an expat sanctuary. It is rare to find the local middle class here. But in Moutallos, almost 100% of the population is Cypriots. But there are a minimum of seasonal tourists in both areas. 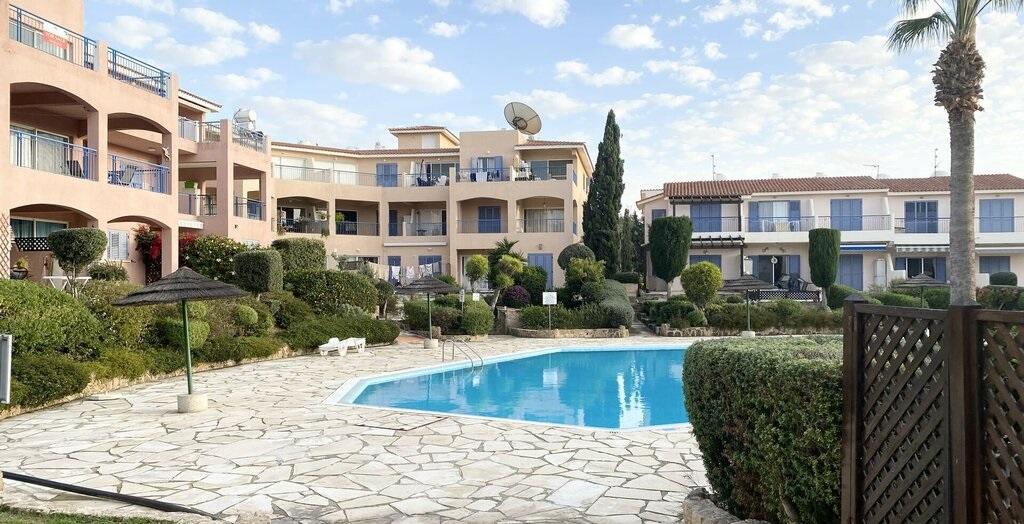 Summary: if Moutallos, in its current form, hardly has a serious investment potential, then Melanos is a good choice for year-round living or long-term lease of residential real estate. 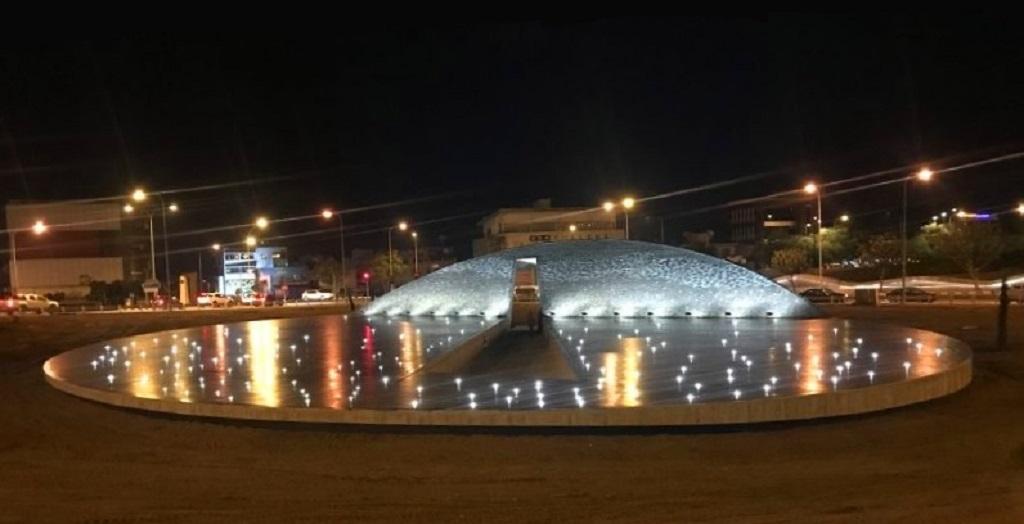 These areas are located at the very entrance to the city from the Limassol-Paphos expressway and in close proximity to the Central State Hospital of Paphos. You can't walk to the sea from here. Popular beaches are at least 10-15 minutes away by car. Thus, it is not a resort.

The real estate is quite modern. Low-rise residential complexes prevail. But there are also many private houses and villas.

The population is homogeneous. Young, educated Cypriots and a number of expats live here.

The infrastructure is perhaps the most developed in the city. There is everything you need for a comfortable life. Good and varied shops. Entertainment centers, gymnasiums and Stelios Kyriakides stadium. There are many family restaurants and other facilities. Here is the Post Office and the headquarters of the Electricity Authority. These areas can be called a medical cluster. In addition to the Central Hospital, there is Evangelismos Hospital, Blue Cross Medical Center and several small private clinics. 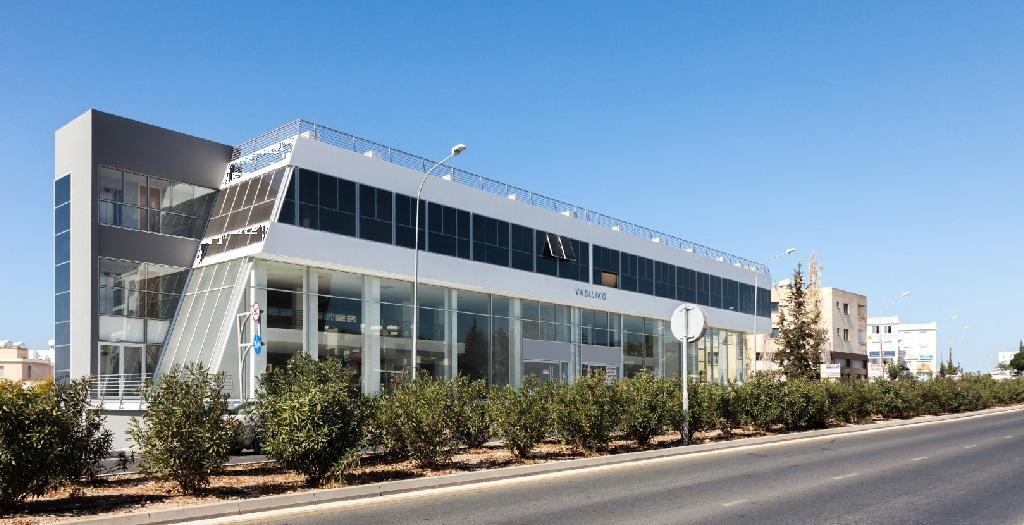 Summary: despite the mentioned self-sufficiency of Anavargos & Vasiliko, their potential for a foreign investor is doubtful. Although, there are several Chinese projects at different stages of implementation.

Paphos is waiting for you 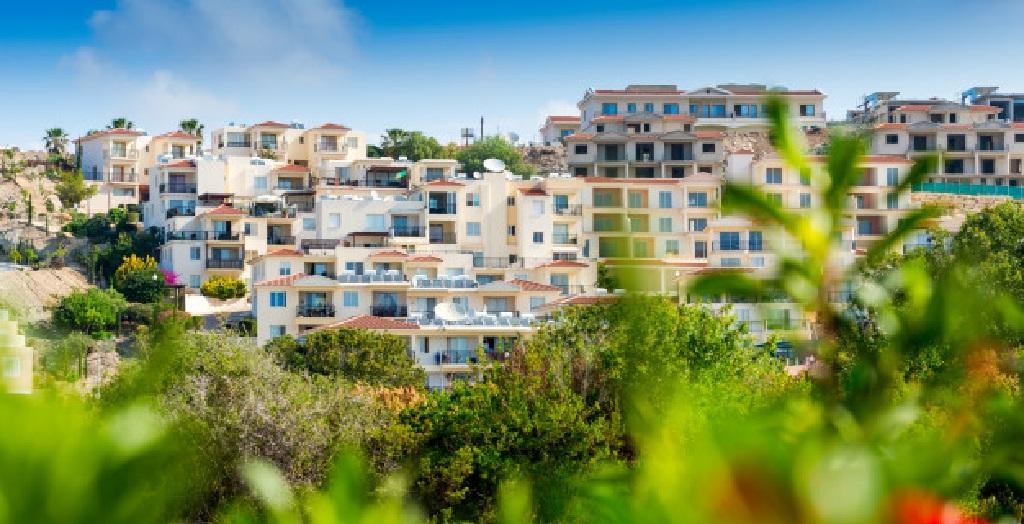 Now you have some idea about the features and differences of Paphos neighborhoods. If you decide to find property here, it will be much easier for you to indicate your preferences when communicating with the employees of the Real Estate Agency.