What New Buildings in Cyprus Called?

The name of residential complexes is often very stereotyped.

Most developers, whether in Cyprus or in another country, try not to come up with too unusual names for their projects, but follow a certain line. Although, of course, there are exceptions.

Before diving into the beauty of Cypriot names and realizing that many houses have their own history, let's play a game.

We'll take five, no, let's take ten names and think about which ones are often used on our island. We will use the catalog of residential complexes in Cyprus from DOM Real Estate, where at the moment more than 750 projects have already been collected (primarily the Limassol district, as well as Larnaca, Paphos and Famagusta). Is it a lot or a little? Of course, this is not yet the whole picture of Cypriot urbanism, but for relatively good statistics it is already enough. So let's play.

Here are 10 stereotypical names for you:

Okay, the latter is not very stereotyped, but we will need it as an example.

So, how were the residential complexes distributed among all projects in the four districts of Cyprus: 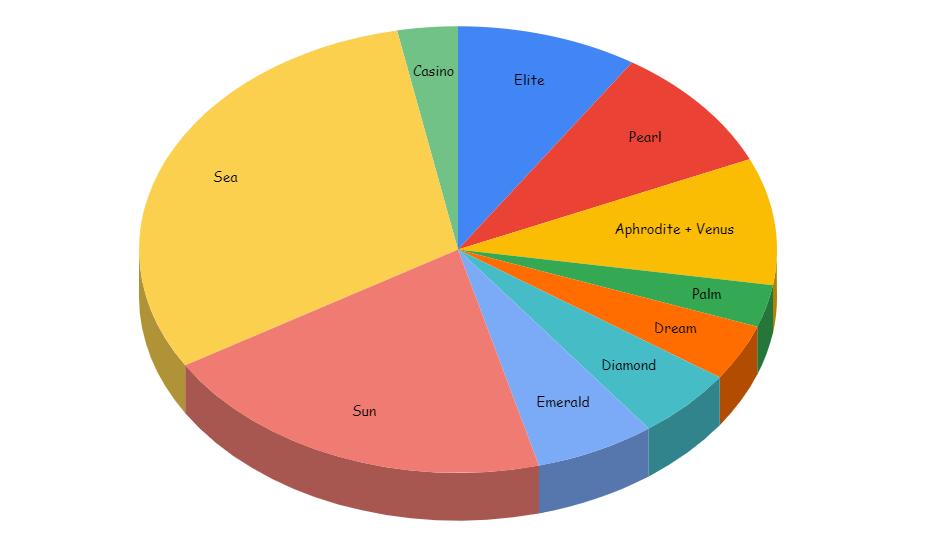 What else do Cypriots name residential buildings after? Of course, after the location of the complex, it is very easy!

Cyprus names of residential complexes in honor of Cyprus

Some of the complexes are named after Akamas, the most important nature reserve in Cyprus. These are complexes of villas, and they, of course, are not located on Akamas, but in Latchi. 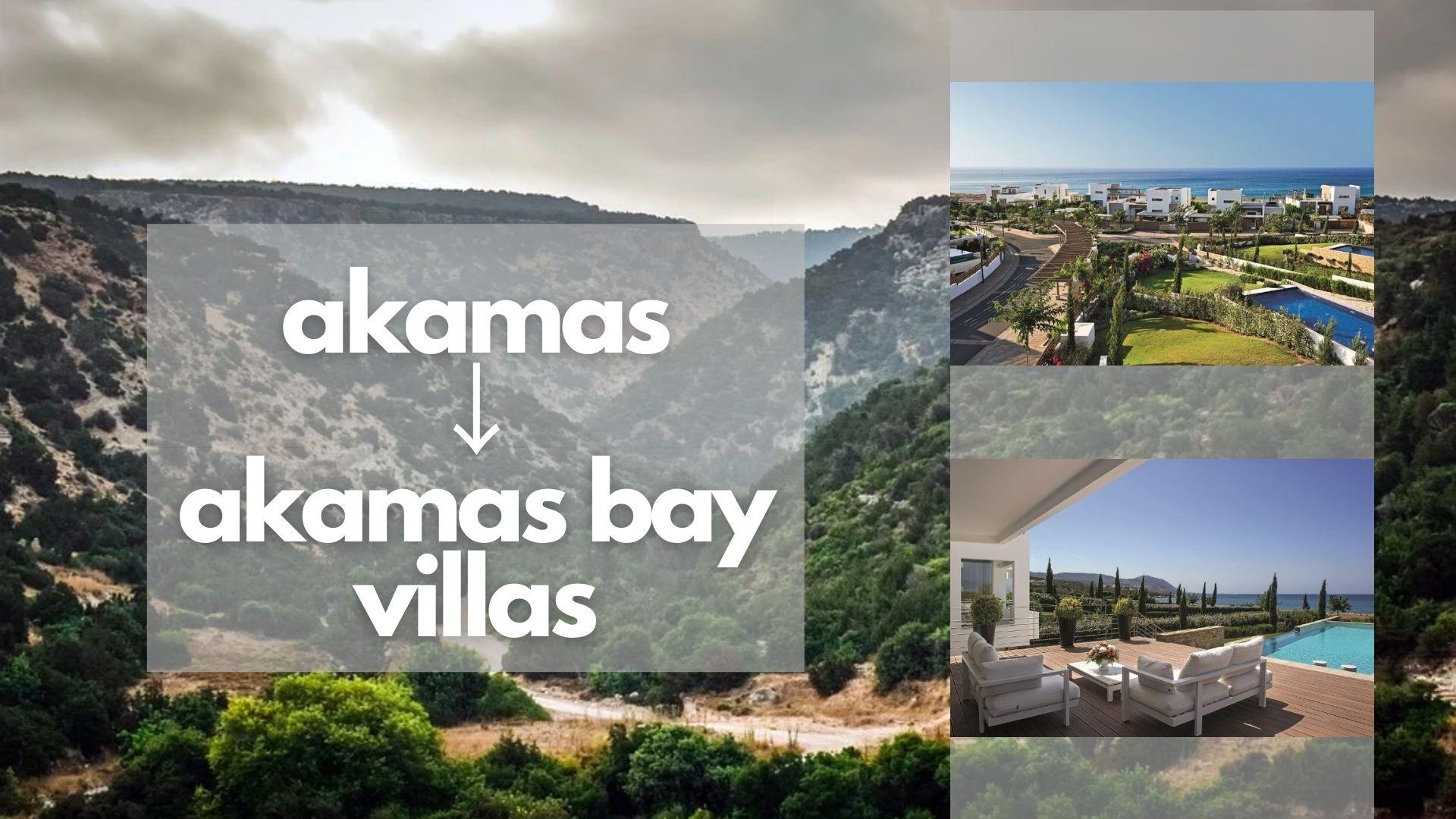 But Akamas is far from the two heavyweights of Larnaca, after which a great number of new buildings is named. These are Kamares and Mackenzie.

Almost every 10th new building in Larnaca (according to our list) is called either "Kamares" or "Mackenzie". Every 10th! And if we look at only the municipality of Larnaca, then every fifth complex will turn out. But why is it so?

There are two reasons for this. And they are very simple:

1. It is in these areas (Drosia, south of Skala and Mackenzie) that active development is currently underway.

2. The names “Mackenzie” and “Kamares” are famous urban symbols. The latter is the Ottoman aqueduct, once built with the money of Bekir Paşa. 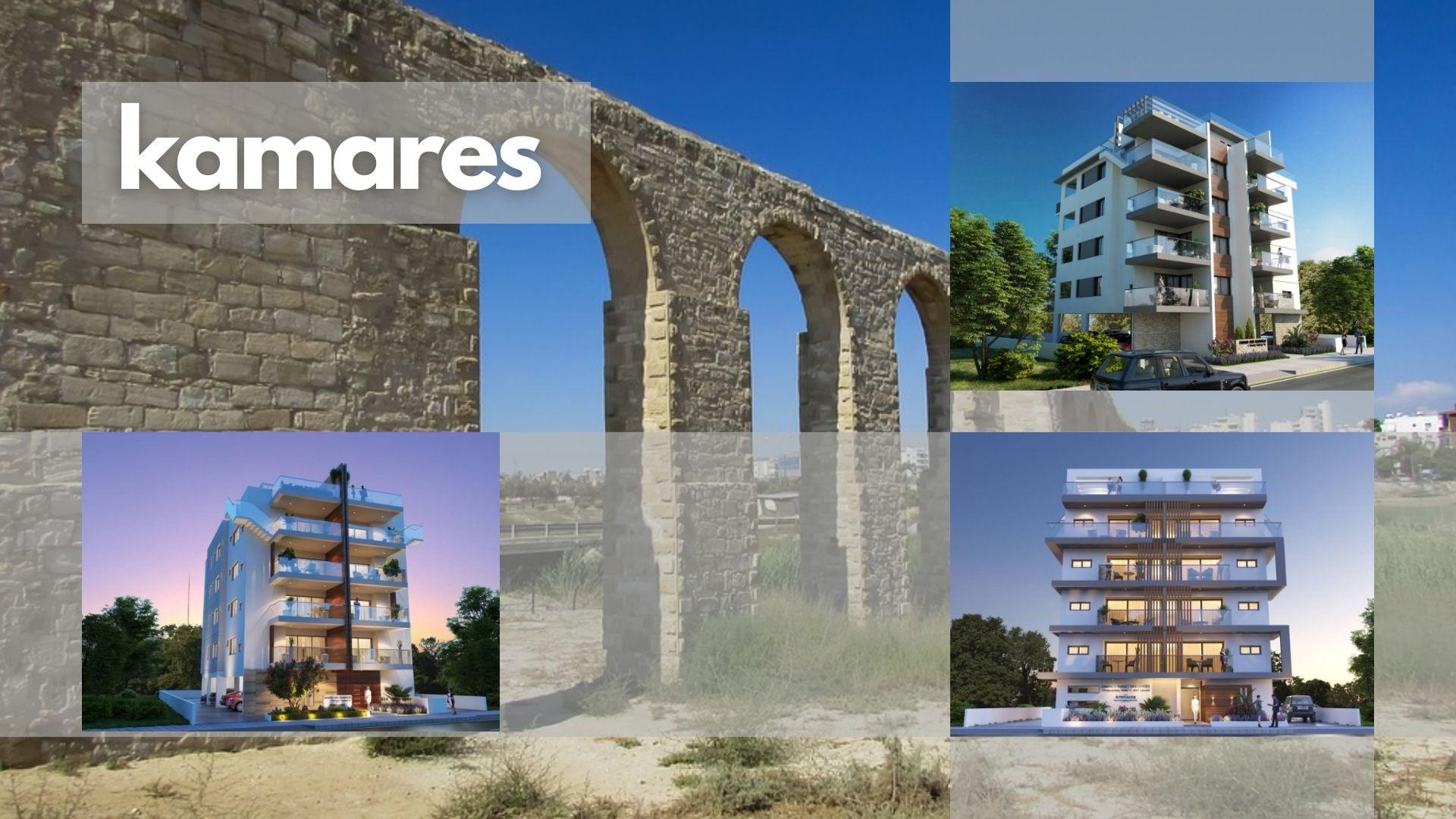 The most cheap option of Kamares is Kamares Heights, a 2-bedroom apartment costs 160 thousand euros. A 3-bedroom penthouse in Kamares View for 265 thousand euros.

Mackenzie was a Scotsman known in the last century among certain circles, who lived in the suburbs of Larnaca. By his family name, a once empty area was named, which has now turned into an elite quarter, which is not only developing, but also biting off land from its neighbors. 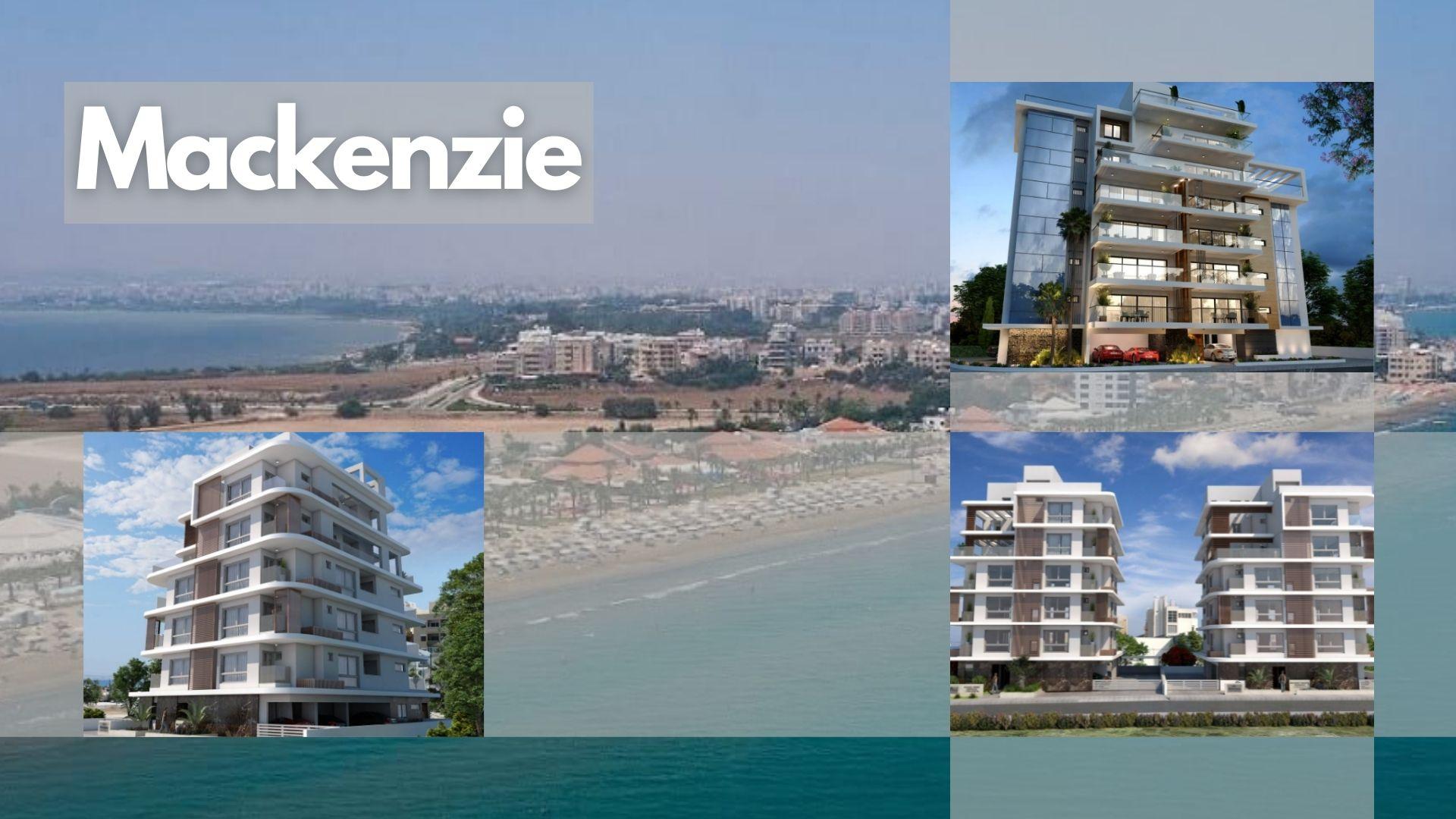 And if everything is simple with Kamares in English, Mackenzie has some problems. On our website, we call the area Mackenzie, because this is what the original Scottish surname looks like. Most developers use this name.

However, not everyone uses that. The fact is that our Scottish surname Mackenzie can occasionally look like Mackenzy.

Hence the Greek name Μακένζυ and our new buildings:

They are one and the same developer. One of the largest in Larnaca, and reliable!

A certain number of new residential buildings are also named after place names outside Cyprus, for example:

Mount Ararat. Of course, this is the famous Ararat Grand Residences high-rise under construction in Limassol. 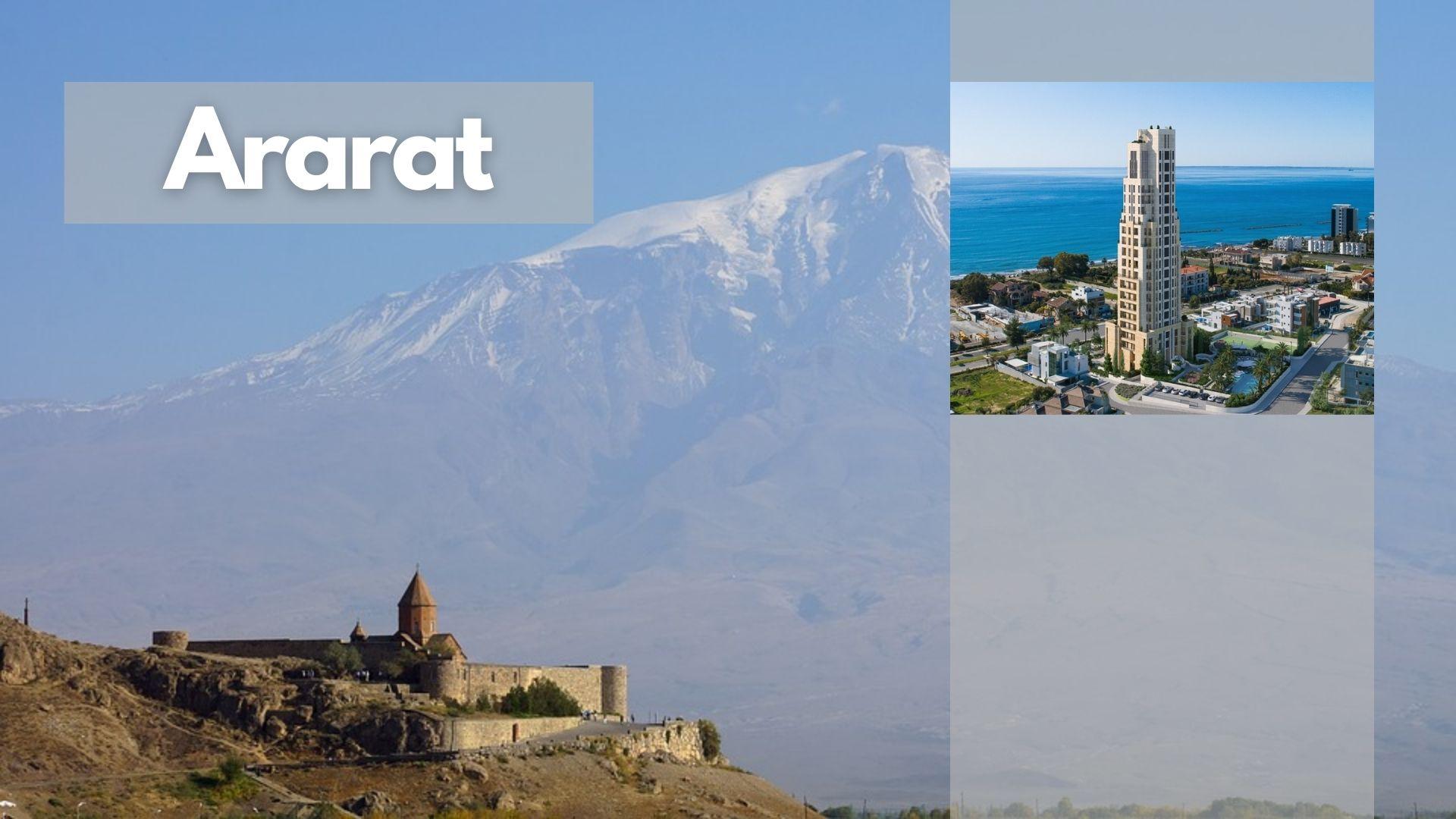 It is impossible for Cypriot developers to bypass the elite area of Beverly Hills in Los Angeles, which is very close to Hollywood. For example, Beverly Hills Residence in Ayia Fila. And in Yermasoyia, another LA neighborhood is represented, Malibu. 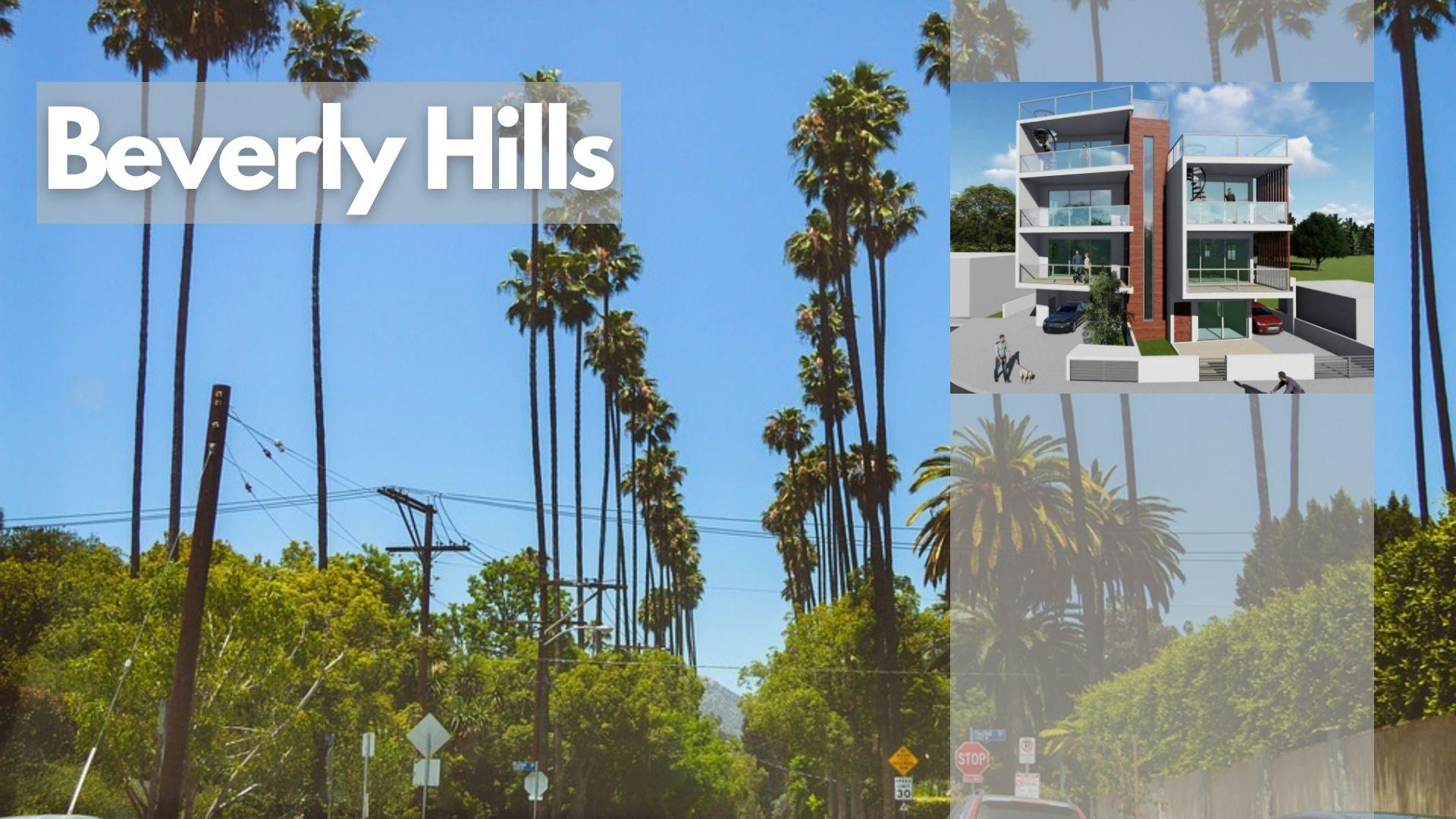 Also Cyprus has its own Hawaii, Jamaica, its own Nile, Wall Street and several Yorks.

There is also the Hermitage in Limassol! But… it has nothing to do with the St. Petersburg museum. The French word ermitage (hence the English hermitage) means a dwelling place of hermit. The first collections of Russian emperors were located in a special annex at the royal palace, therefore they received such an unusual name.

When we talk about complexes named after geographical places in Greece, it is difficult for us to separate geography from mythology directly. For example, in Kato Paphos, not far from the excavations and the lair of Polish and Australian archaeologists, the Arcadia Residences complex is being built.

In general, Arcadia is an area in the Peloponnese. The very center of the Peloponnese (Ancient Arcadia did not even border the sea). The area is not particularly remarkable, where nothing happened for thousands of years. They grazed goats, lived according to old customs, not paying attention to life on the other side of the mountains. Arcadia was (although why was it) the most backward country, to which other Greeks did not care, as she did not care about other Greeks.

This continued until the era of Hellenism, when Greek (and then Roman, and then European and Russian) poets and writers began to idealize such a backward pastoral life. Since then, Arcadia has become a symbol of a utopian ideal life, harmony with nature and yourself!

The poets Theocritus and Virgil, Dante, Schiller and Voltaire, Karamzin and Pushkin, Gogol and Chekhov wrote about Arcadia. Arcadia was painted by famous artists. Auch ich in Arkadien! ("And I am in Arcadia") - said Goethe, et in Arcadia ego ("And I am in Arcadia") - this is what Nietzsche called part of his philosophical work. True, almost everyone who turned to this place had one thing in common - they had never been to Arcadia. 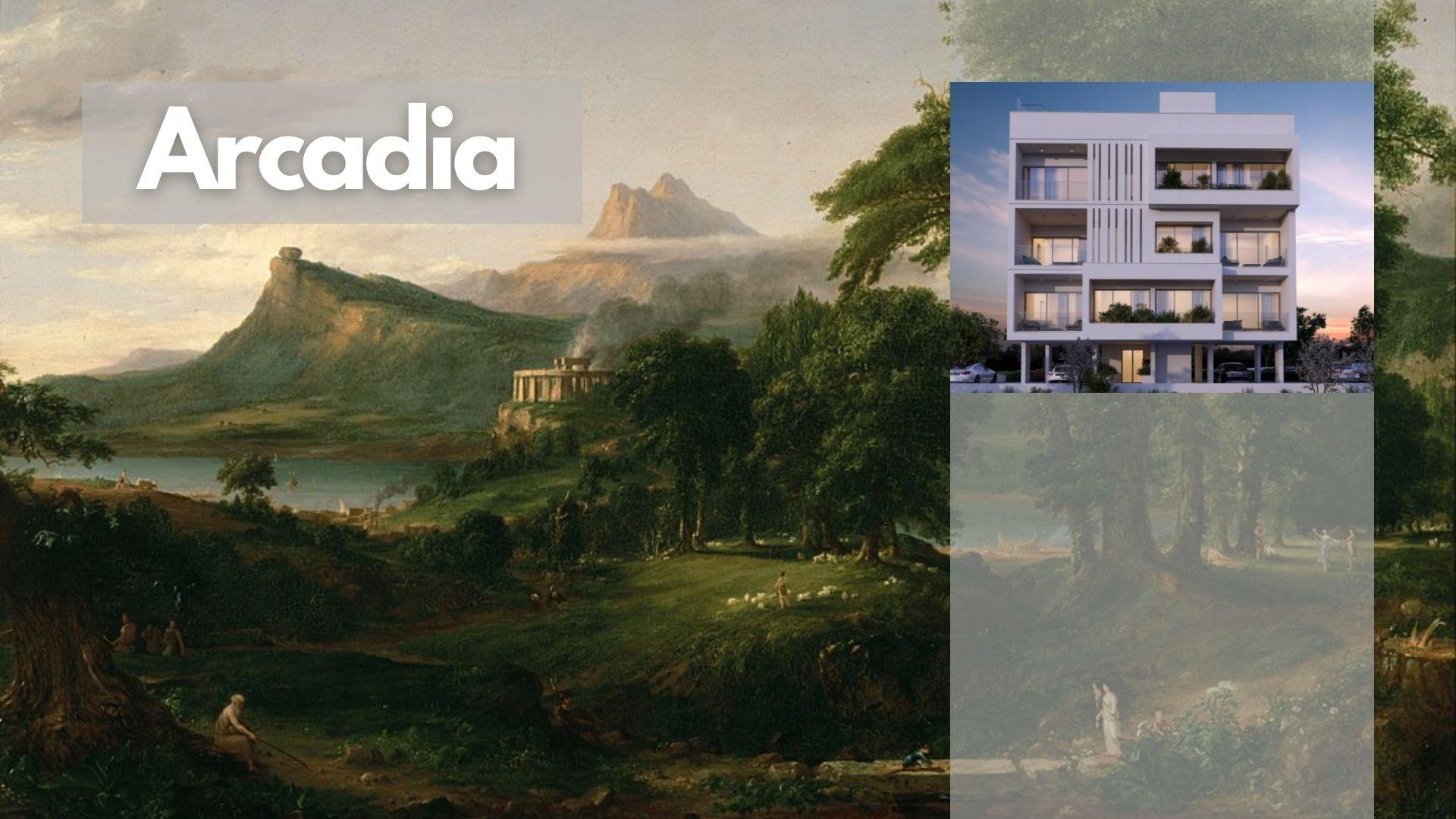 Another such geographical and mythological name is Ithaca.

Home island of Odysseus, his kingdom. The hero of the Trojan War could not get there for 10 years (or 20, if you count the years of battles under the powerful walls of the enemy city). He spent many years with the goddess Calypso in the far west, reached the underworld of Hades.

As well as Mackenzie, Ithaca is also not so simple. Initially, the inhabitants called their island Ἰθάκα, hence the Roman name Ithaca came from, and this word came to the English language. However, developers do not want to call their projects that way. In ancient times, under the influence of dialects in the Greek Mainland, the islanders began to call their homeland Ἰθάκη, hence the English-modern Greek form Ithaki appeared.

So, in Agios Athanasios, a complex of villas Ithaki Houses appeared. But that's not all.

You can also combine the original ancient Greek and modern Greek forms and get Ithaka and the new building of the same name in Limassol. Or, for example, do you know how to understand that the developer is a native speaker of Slavic languages ​​(in our case, a Russian)? They will call his complex Itaka. But, for example, if the developer were Italian or Portuguese, then the house could be called Itaca. 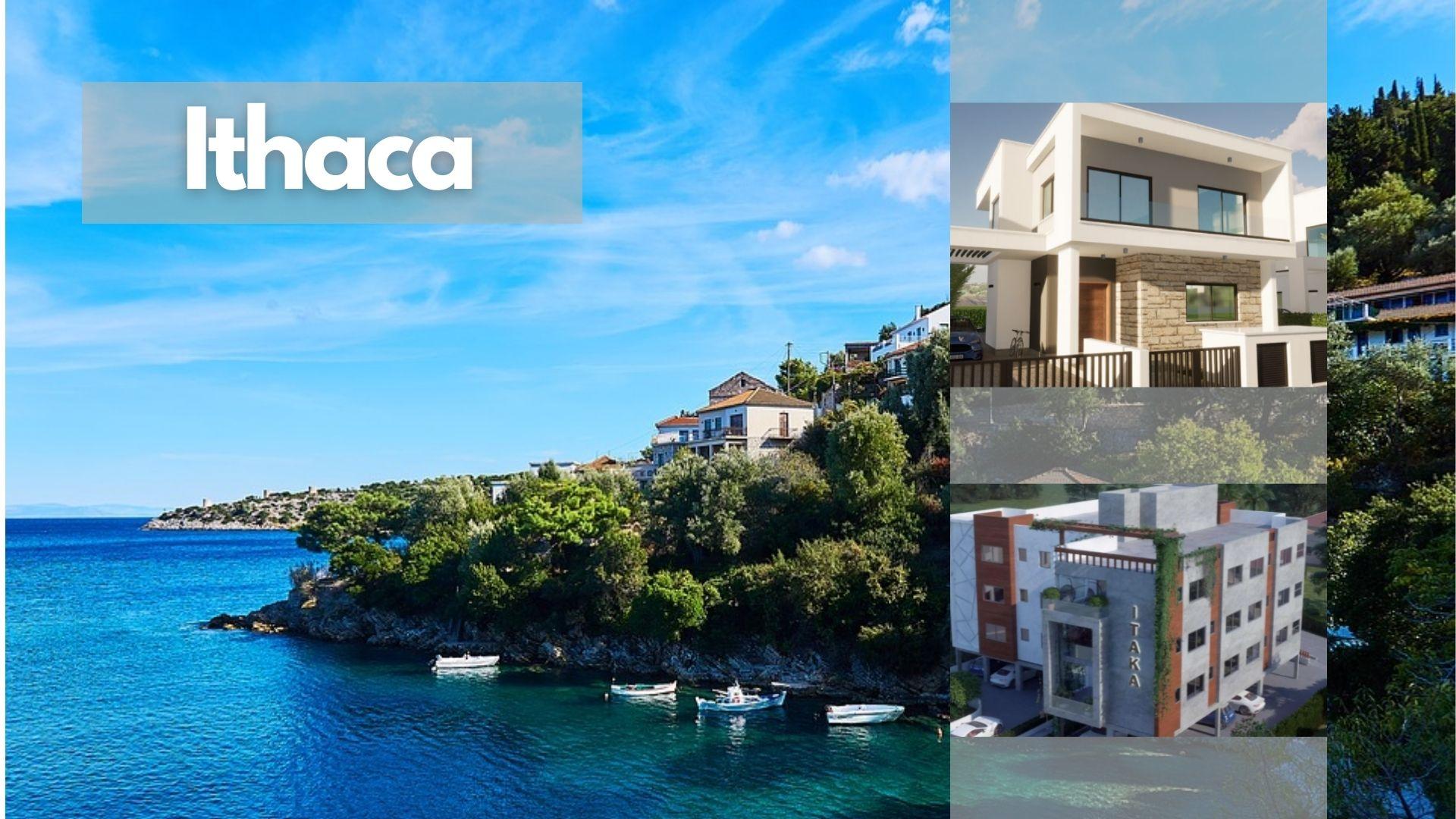 A good number of new buildings in Cyprus are named after gods, heroes and other participants of mythological vicissitudes. One of the most popular characters is Aurora, just take a look: 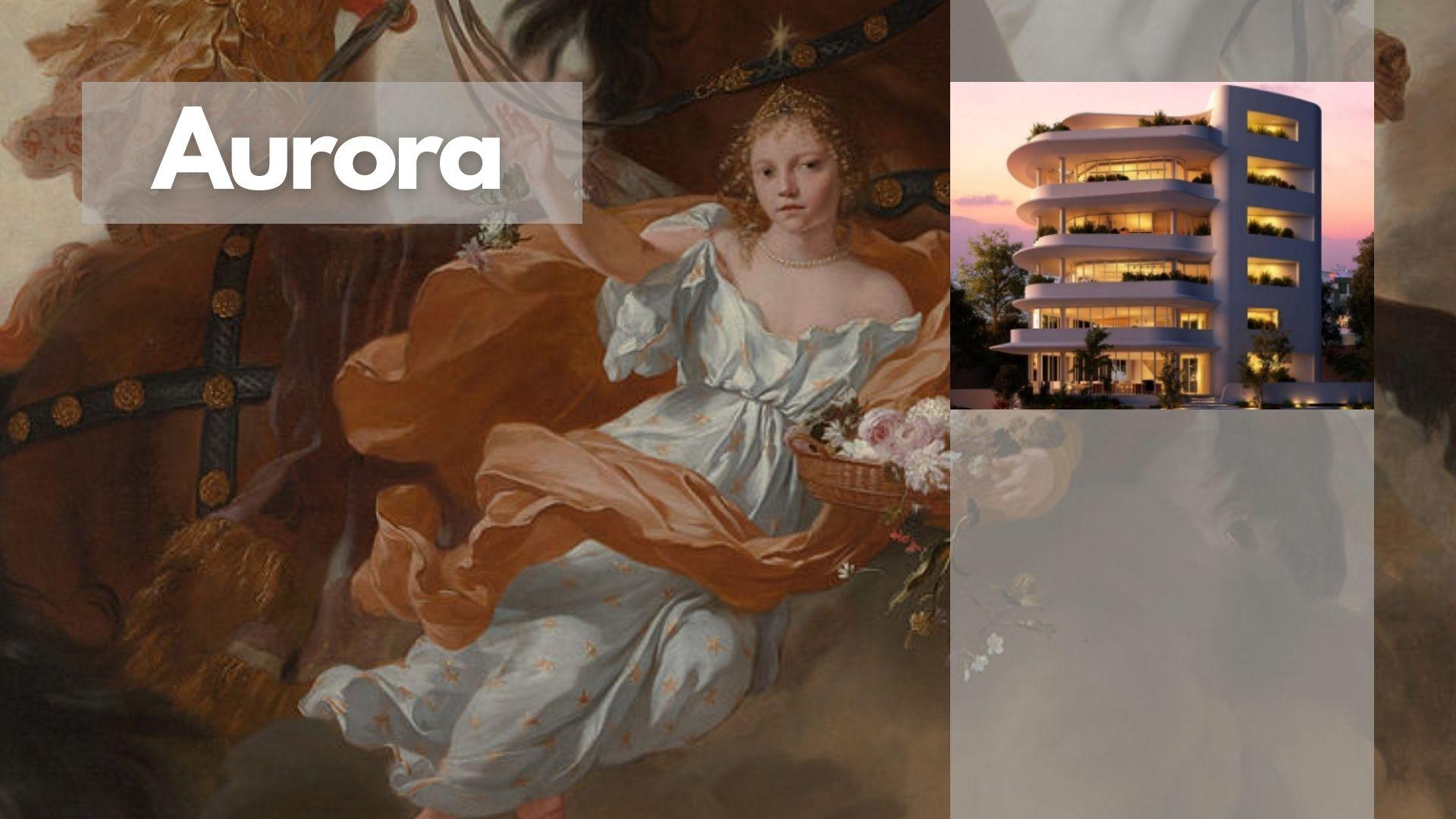 Aurora-Eos was the consort of Astraeus, the god of the starry sky (in fact, he was either a titan or a giant). Aurora and Astraea had many children, including the four main winds: Notus, Boreas, Eurus and Zephyrus.

The most pleasant of the winds was Zephyrus. Indeed, the north wind, Boreas, brings cold weather and a Mediterranean winter to Greece and Cyprus. It brings rains and storms. The south wind, Notus, is also not revered in Cyprus and southern Greece — it can bring African dust, and in summer it is too hot because of it.

Eurus, the east wind, is too changeable and difficult to forecast. Zephyrus is another. He lived in distant Thrace and his arrival marked the beginning of spring. A light and pleasant breeze that stopped constant winter showers and terrible storms. Great hymns were written to Zephyr.

Zephyrus is a residential building in Limassol — Zephyr Residences and Villas in Paphos — Zephyros Village. 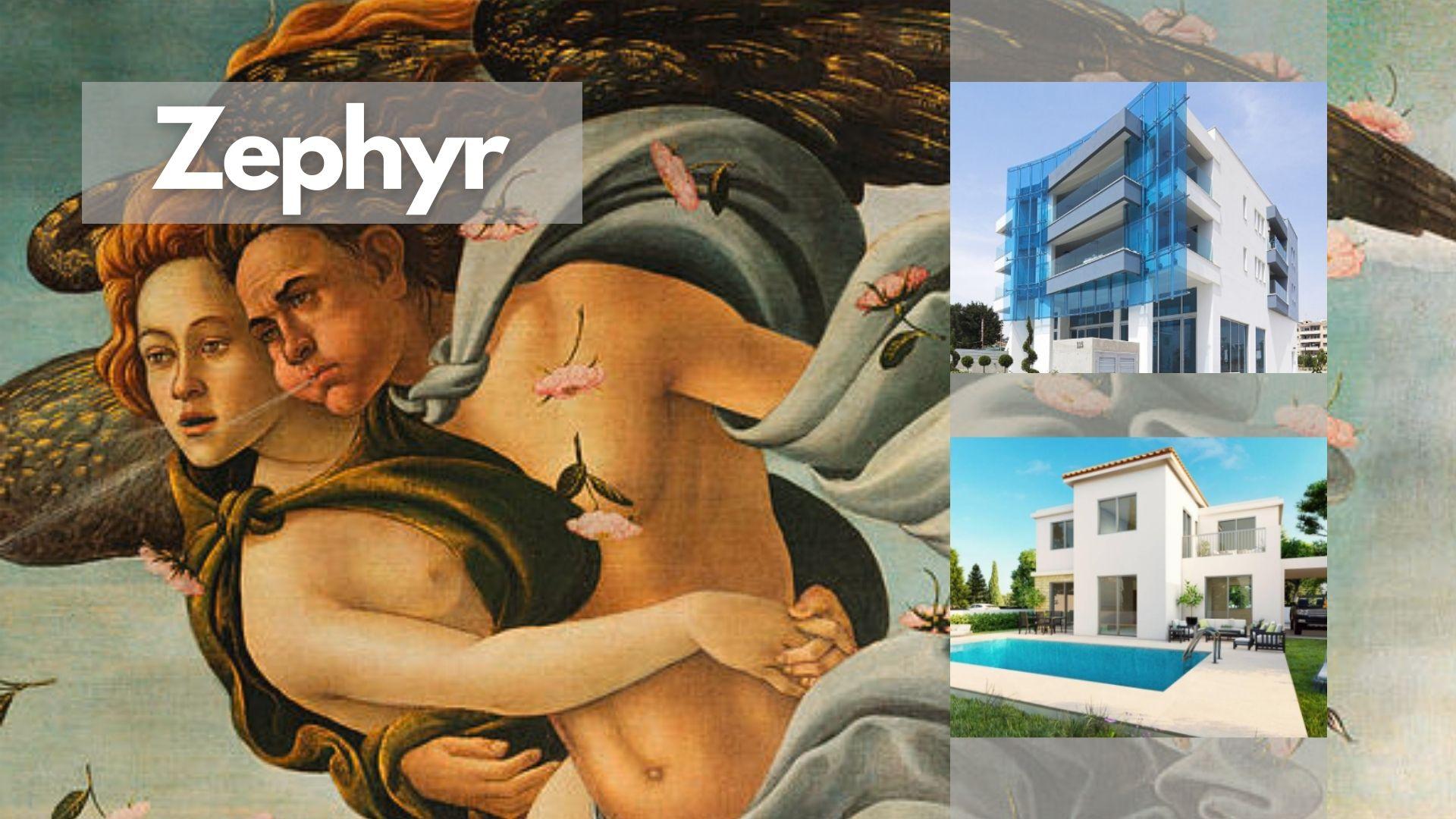 It is also not necessary to confuse two completely dissimilar characters — Arion and Orion.

The first of our heroes, Arion, is a lyrical poet and a master of playing the kithara, a native of Lesbos. Thanks to his talent, he earned huge treasures and took them by ship to Corinth. But here he met bad luck, the sailors, who decided to take possession of the poet's property, threw Arion off the board. However, our hero was rescued by a dolphin who could not resist his game and helped Arion get to shore.

In Limassol there is a residential building, Arion Court, where you can buy apartments for only 268 thousand euros. 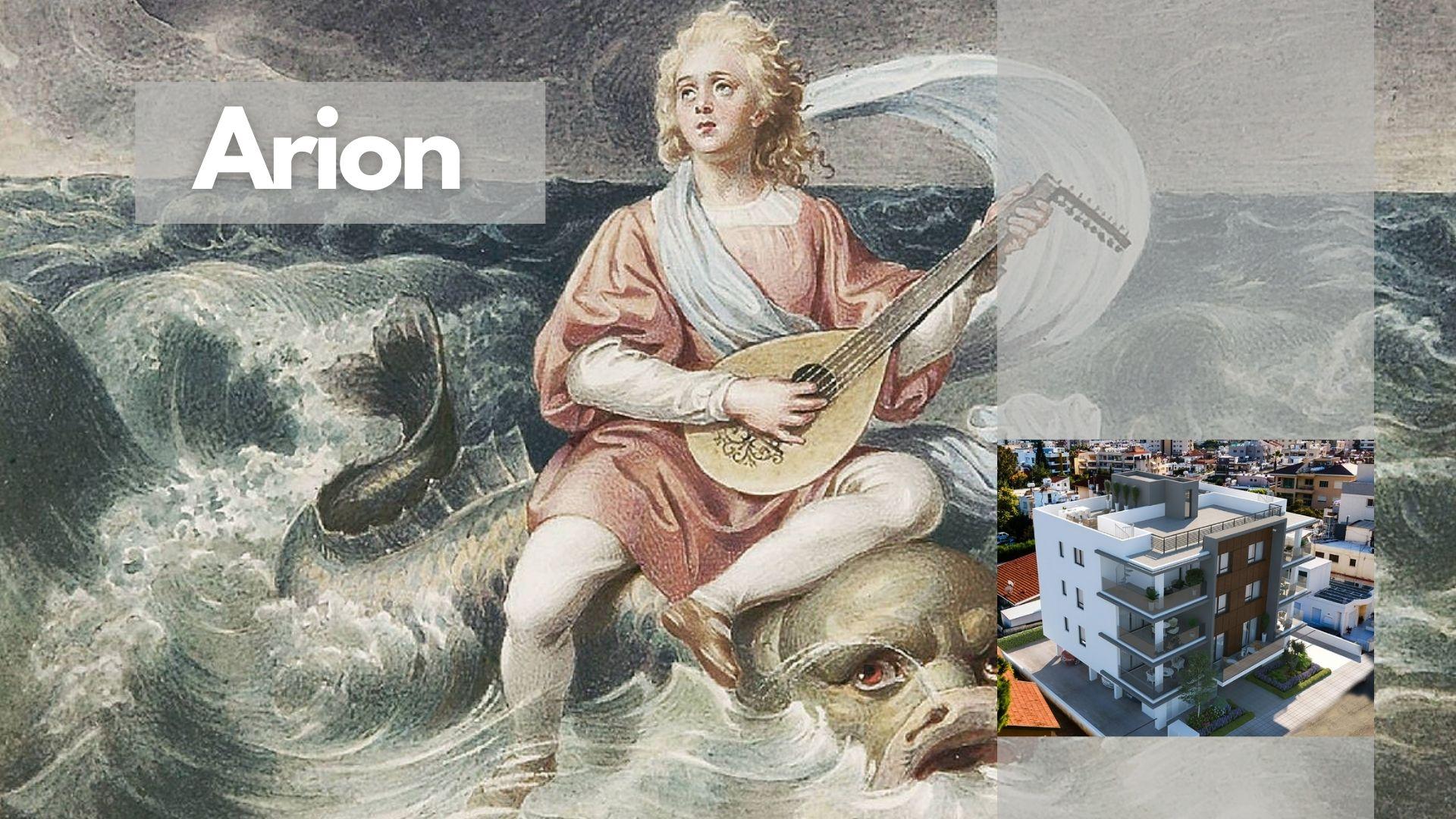 Arion was also the famous horse, the son of Demeter and Poseidon. They especially loved to worship Arion the horse in the already mentioned Arcadia.

If you look at the sky, go outside the big city in the evening, then now (December-January) you will clearly observe the constellation of Orion. Although here in Cyprus, Orion is visible practically all year round. This is one of the easiest constellations to identify. 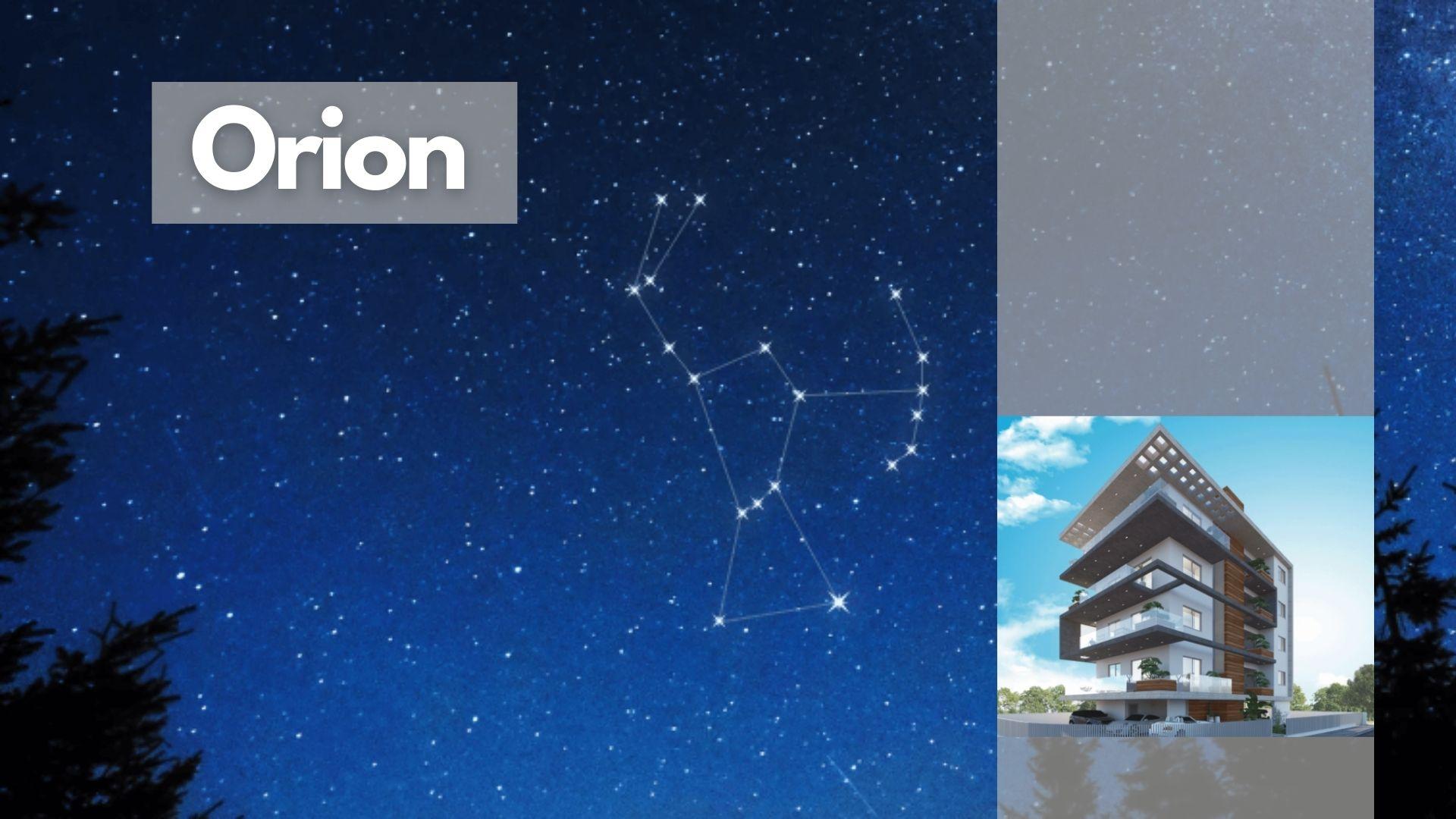 Orion is a great hunter who was lucky enough to participate in the hunt with Artemis. He had tender feelings for both Aurora-Eos and Artemis. The purpose of his last hunt was not wild animals, but the nymphs of the Pleiades. On this hunt he died, and the gods took him to the starry sky, right after the Pleiades, on which he staged a fatal hunt.

Of course, this is not the whole list of names. Even by the name of new projects, you can study the Cypriot nature, local flowers, plants and trees, you can learn Greek (and even ancient Greek), and you can also learn world history.