Top 9 Most Impressive Green Roof Projects in the World

New buildings don't have to be giants of glass, steel, and reinforced concrete. They can be made environmentally friendly by greening the walls or roof. Today, there are hundreds of examples of such buildings around the world - from private villas to shopping centers.

This suggests that eco-architecture is confidently gaining a place in urban planning. We will focus only on those projects in which the architects decided to make a green roof, and consider one such building in different areas of architecture and construction.

A green roof is a roof on which reinforced concrete or tiles are replaced by greenery, flowers and plants. Such roofs improve air quality, reduce carbon dioxide in the atmosphere, cool buildings and surrounding areas, and save energy in heating and cooling. 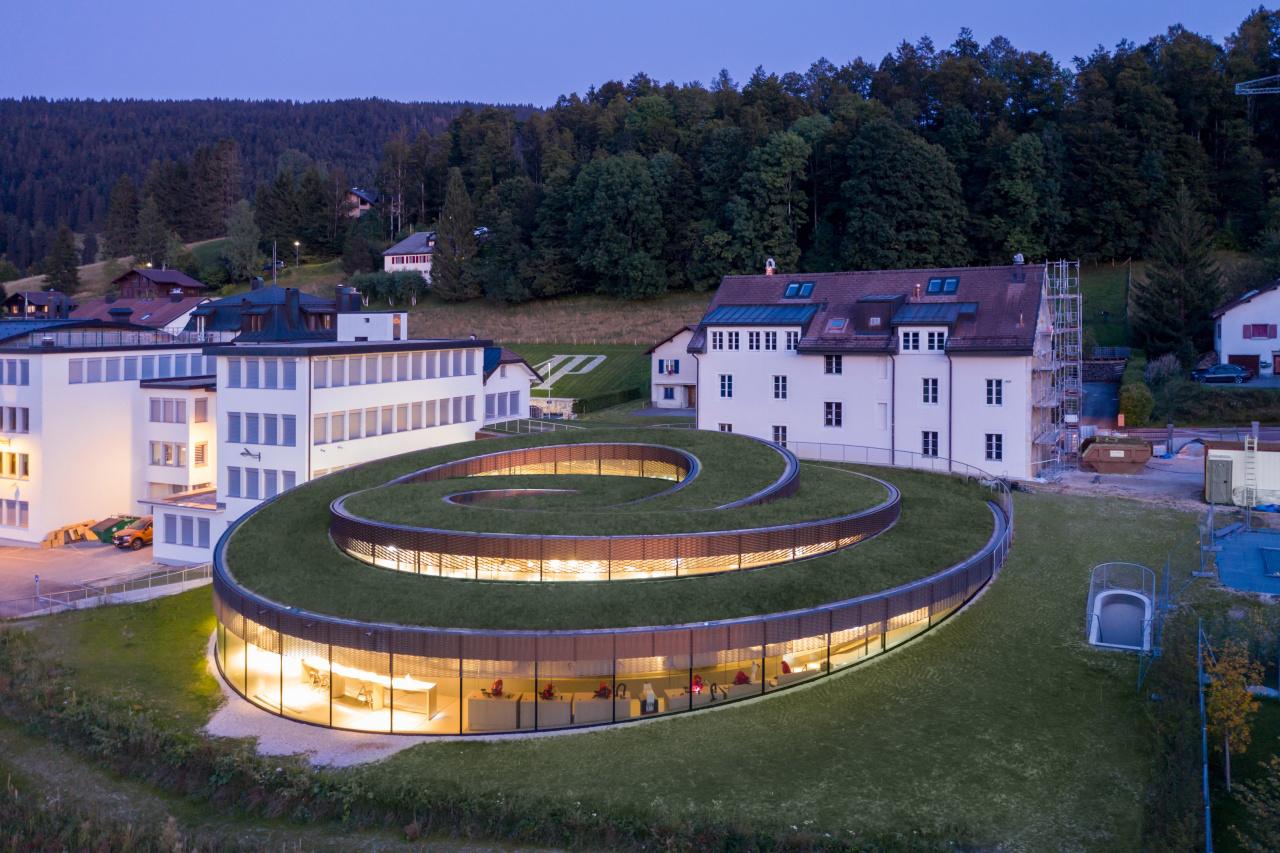 Technically, a green roof requires a layer of waterproof membrane underneath and separate hidden levels for drainage, insulation, and filtration. In addition to being good for the planet, these roofs are pleasing to the eye, combining environmentally friendly practices with heightened levels of aesthetics and whimsical shapes.

If you think that eco-architecture is a newfangled trend that has become a response to global warming and deforestation, then you urgently need to visit Iceland. Six so-called turf churches have been preserved here, the latest of which was built in 1883-1885. 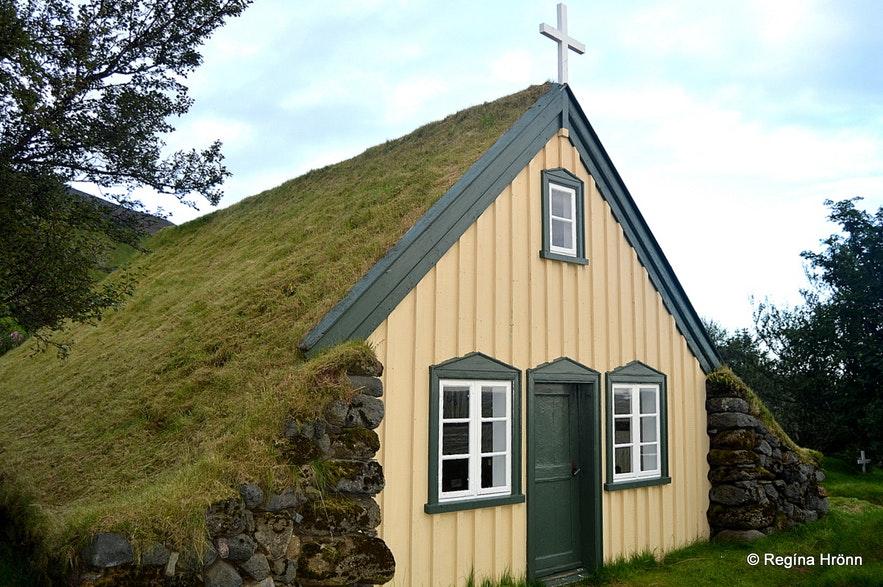 The technology of peat construction was developed by the inhabitants of Northern Europe in the Iron Age.

The walls of the building were built of stone, and the roof was laid out with peat blocks, which over the years were overgrown with grass and moss. Over the centuries, moss has covered the walls themselves, making it seem as if the building is growing into the surrounding landscape or growing out of the ground. 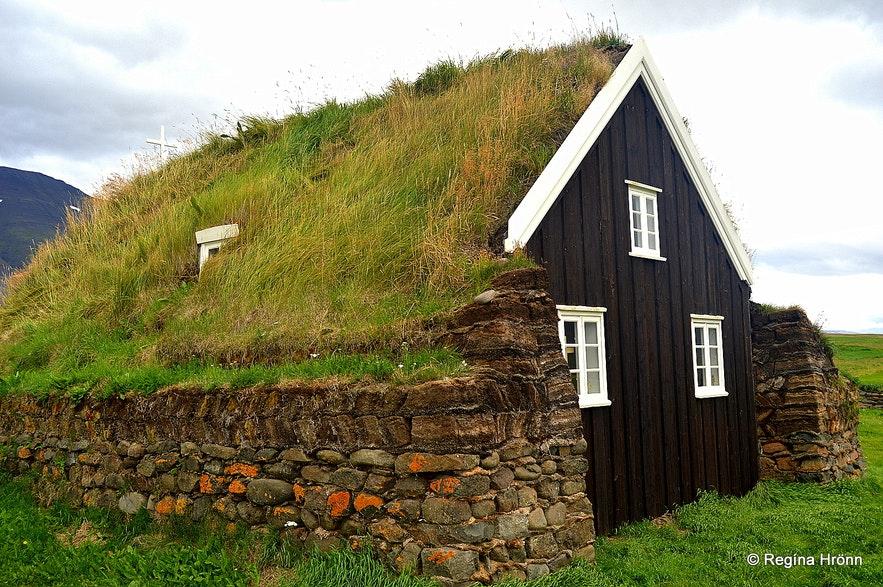 The practical advantages of this technology are obvious - high heat retention. There are residential buildings built using the same technology both in Iceland and the Faroe Islands.

Argentine architect Emilio Ambash, who later became famous for the design of the ACROS Fukuoka center, created an absolutely breakthrough concept in 1975 for the Casa de Retiro Espiritual retreat center (Spanish for “house for spiritual relaxation”), which was erected near Seville. 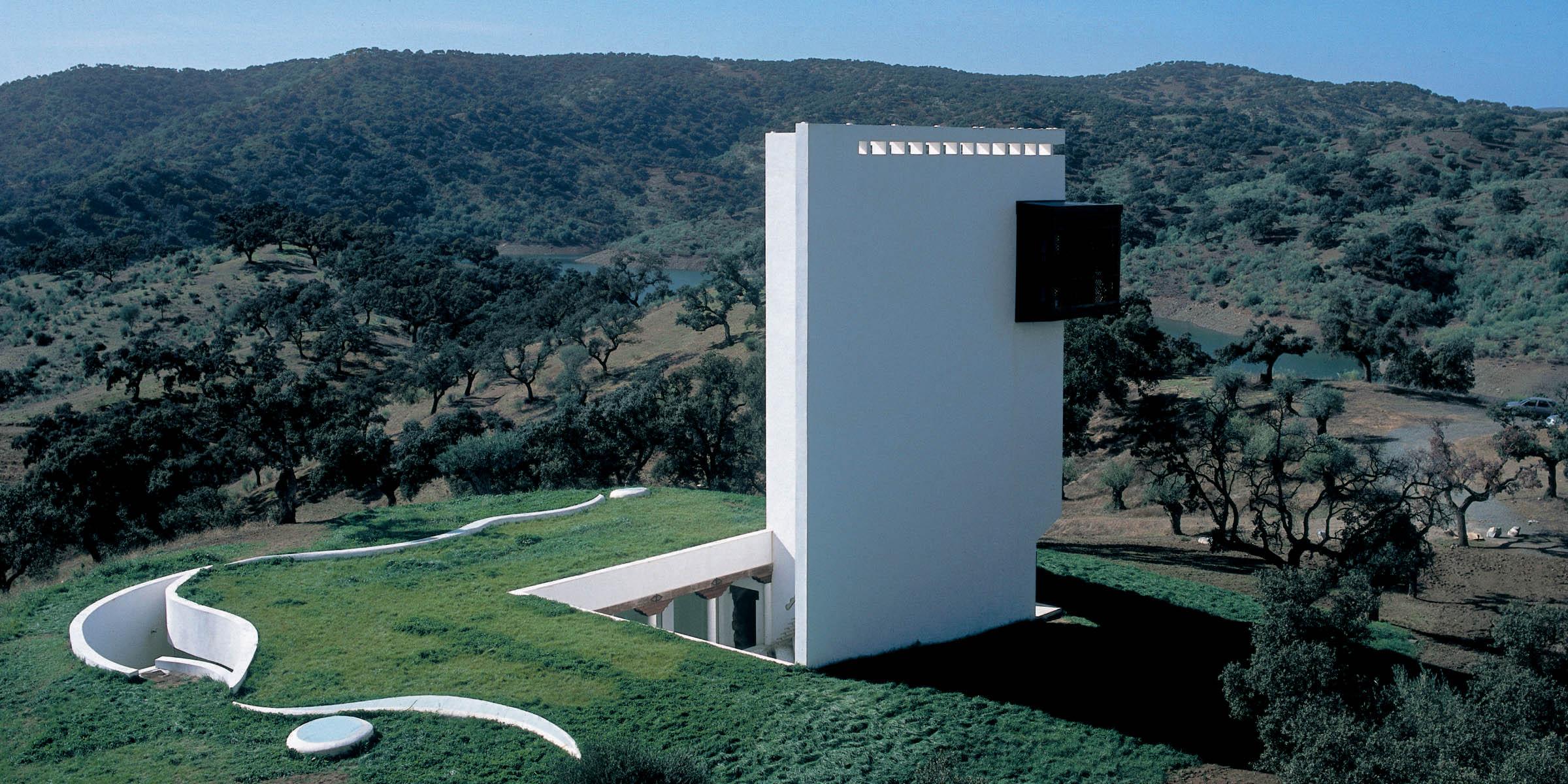 The premises of the building are underground, inside the hill where the center is designed. Above ground level, there is only a corner structure inspired by traditional Andalusian architecture: whitewashed walls, rows of small skylights, corner wooden balconies and wooden entrances. Two stairs lead to the balcony, which symbolize the path of spiritual ascent.

One of the most gigantic and impressive hotels in the world is located in Singapore and it is, of course, the project of the architect Moshe Safdie called MarinaBaySands. The silhouette of this hotel with the largest casino in the world resembles a ship floating in the sky, which is supported by three pillars. 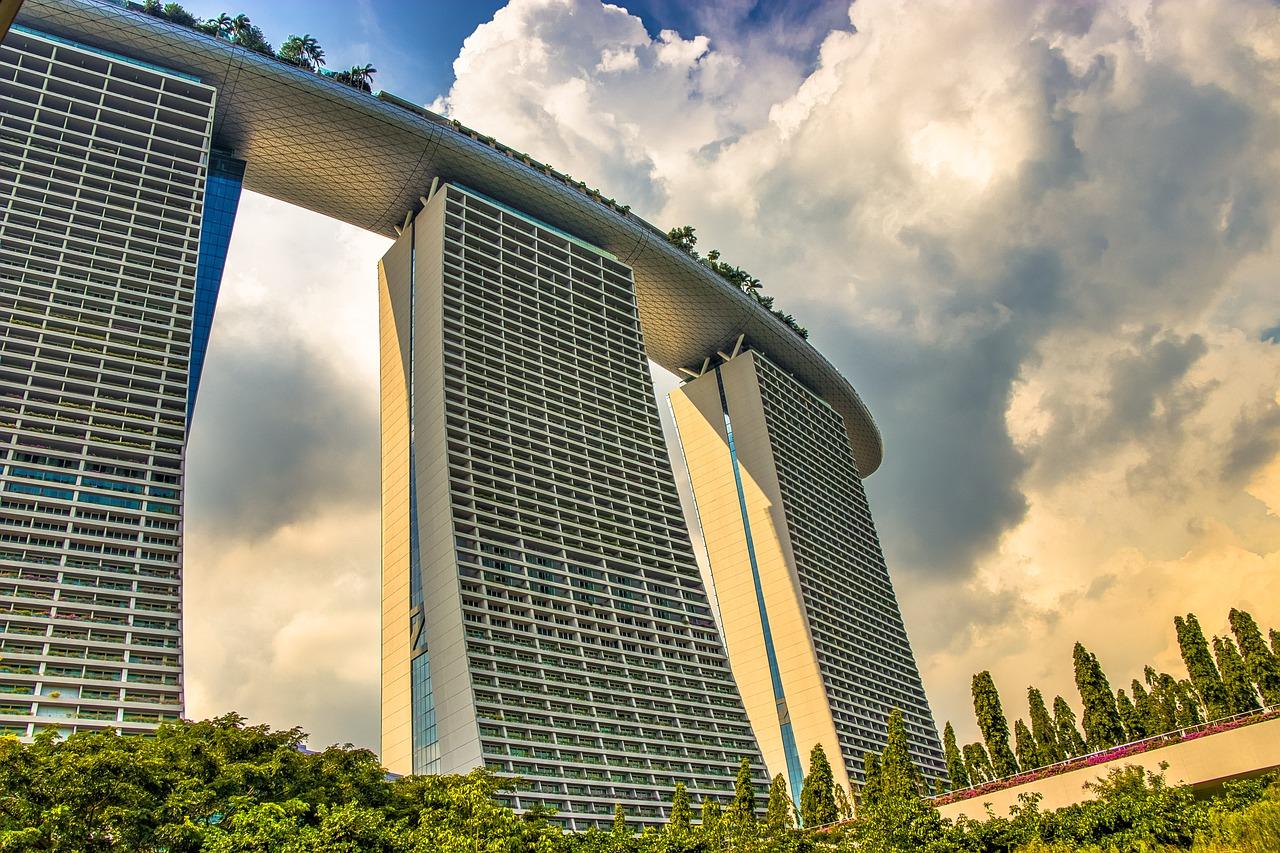 "Air Coral" is a gigantic skypark that connects three hotel buildings. Its capacity is almost four thousand people, there is a pool 150 meters long. Part of the roof is occupied by two gardens. Only hotel guests can get to the top, although two cases are known in history when third parties managed to overcome the security and tracking system to find themselves in the skypark.

Austrian architect Friedensreich Hundertwasser made history with his eccentric, almost toy-like designs. The most famous of these is the Hundertwasser House in Vienna. To match him - the residential building Waldspirale (German: "Forest Spiral") in Darmstadt. The spiral was Hundertwasser's favorite geometric shape, and he even staged a sensational performance in which he drew a continuous spiral line across the floor and walls of a classroom. The residential building Waldspirale is a tribute to the architect's love for spirals, which he thought of as an opposition to all existing styles, although, strictly speaking, the building is not a spiral, but a horseshoe. 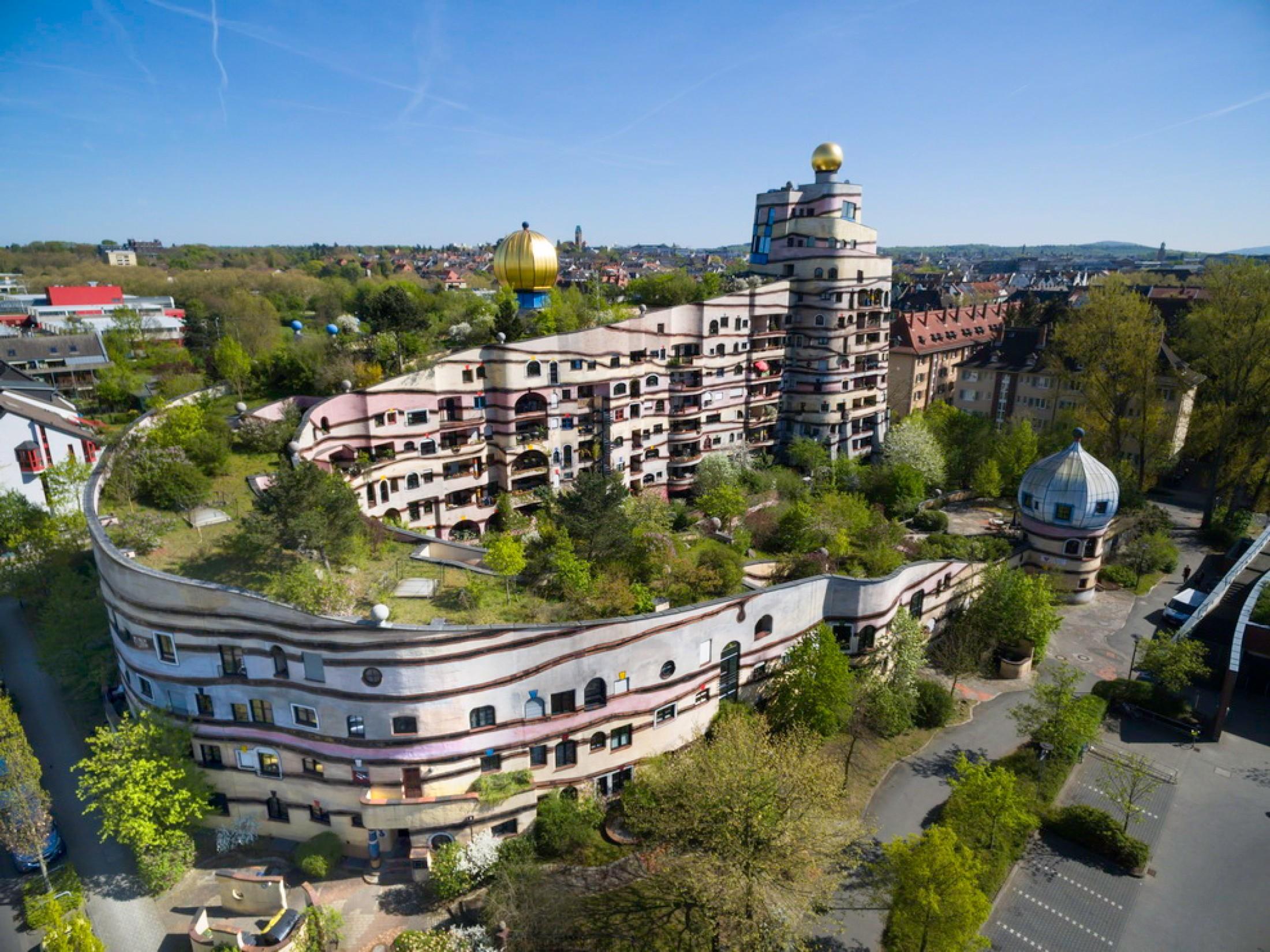 The roof of this building is planted with grass and trees. Of the interesting features - the house does not have identical windows, although there are more than a thousand window openings. Each window is unique and does not repeat the other.

The Vancouver Convention Center is home to Canada's largest living rooftop. It is home to over 400,000 native plants, four colonies of bees with a population of up to 60,000, and a variety of flora and fauna. 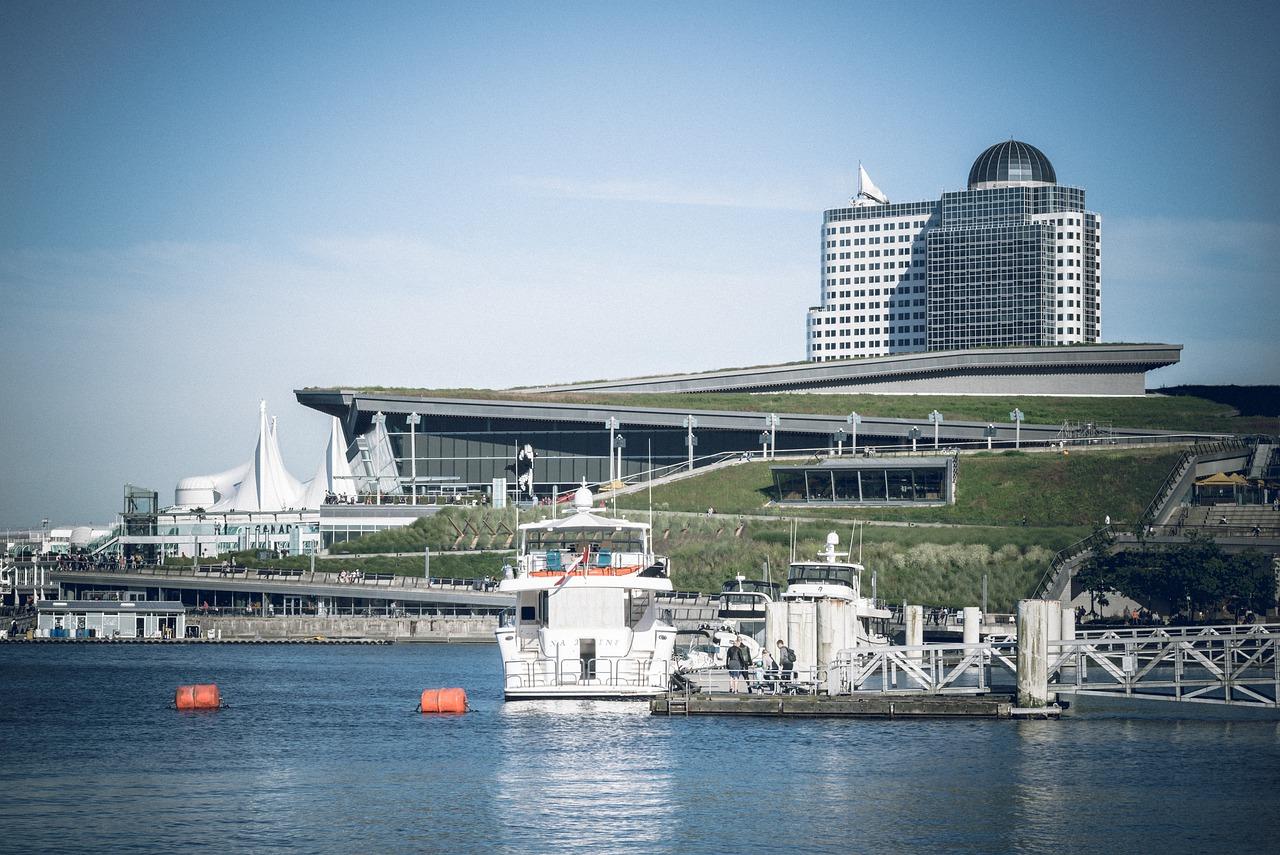 The architect's idea was purely eco-friendly, not entertaining, so there is no access to the roof for visitors. This allows it to be a full-fledged eco-system with its own rhythm of being.

Architect Renzo Piano conceived his design for the California Academy of Sciences building as a space where ecology and education come together. The great Italian architect based the project on the idea of ​​seven hills (as you know, not only Rome and Moscow, but 91 other cities around the world were built on seven hills - the whole point is that the number seven is perceived as sacred). 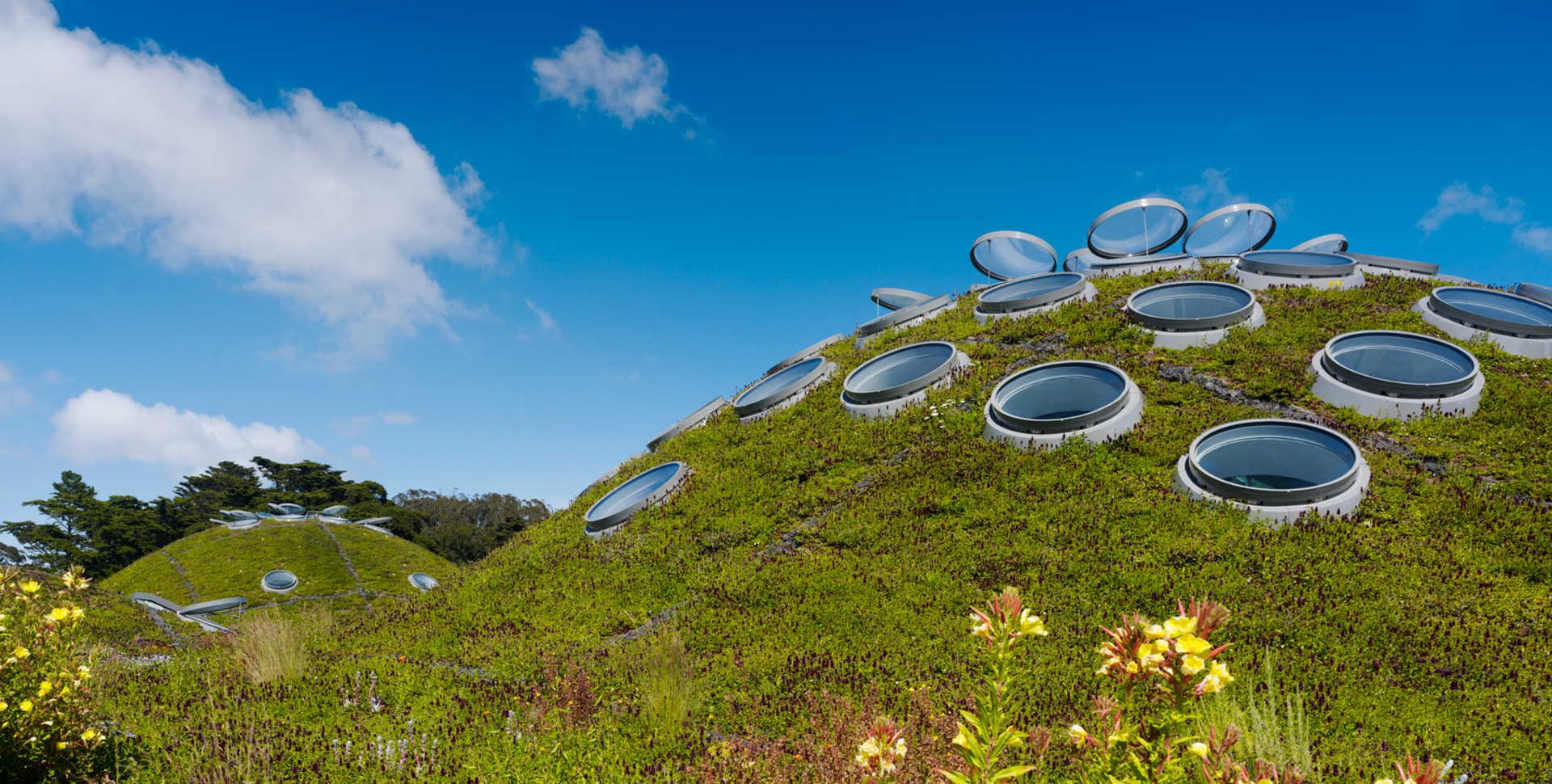 The living roof with seven hills has an area of one hectare and is home to about 1.7 million plants. There are also built-in solar panels and a weather station. The roof serves as an open-air auditorium for lectures and seminars. The building was built in 2008.

Located in Tao Yuanchu Park, this community center combines three different areas: sports, cultural and health. Three sectors are connected into a single space with the help of a green roof. 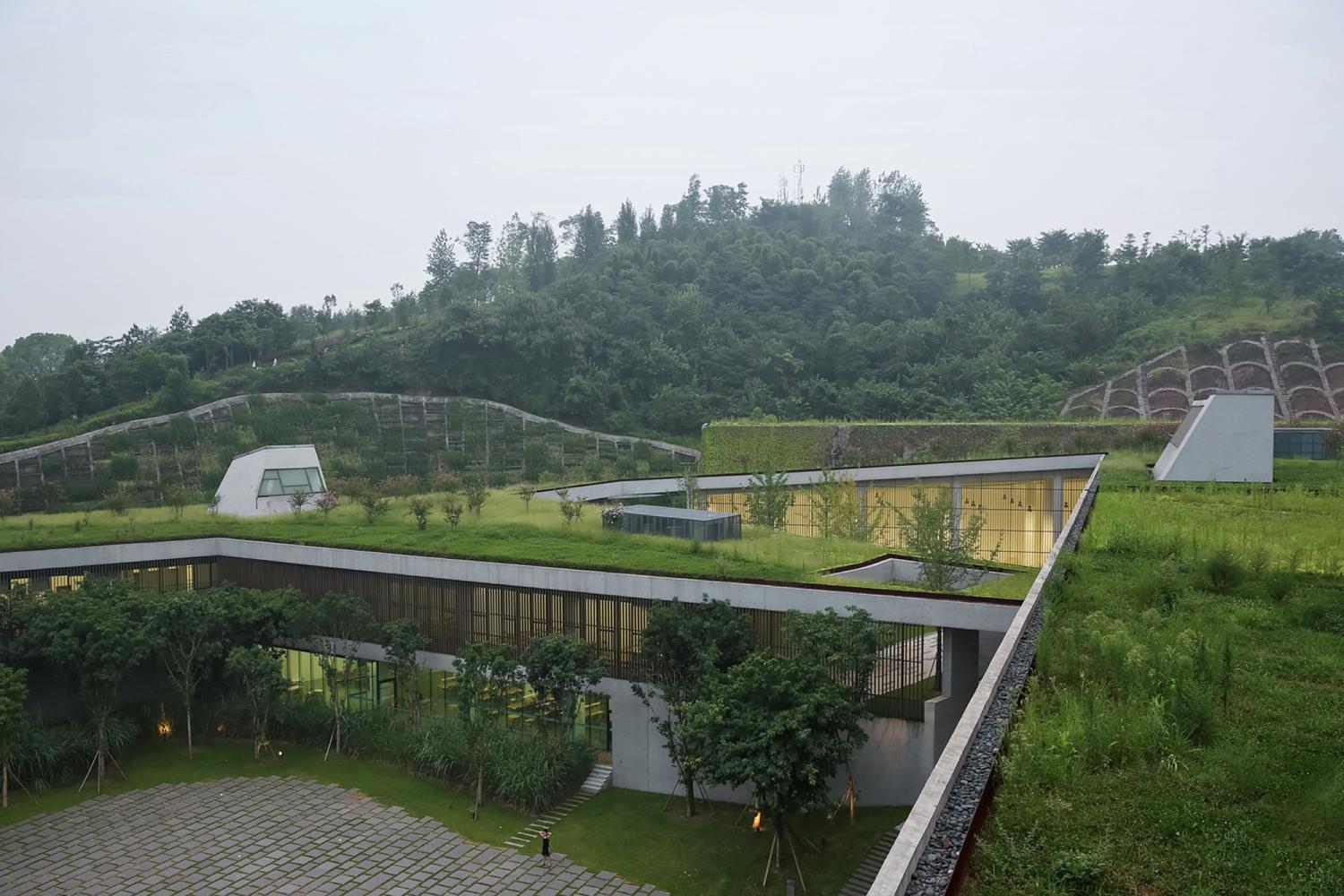 The project belongs to Vector Architects, whose specialists abandoned the banal idea of building a community center in an open field. Instead, they decided to combine the architectural forms and the hilly landscape of the park. 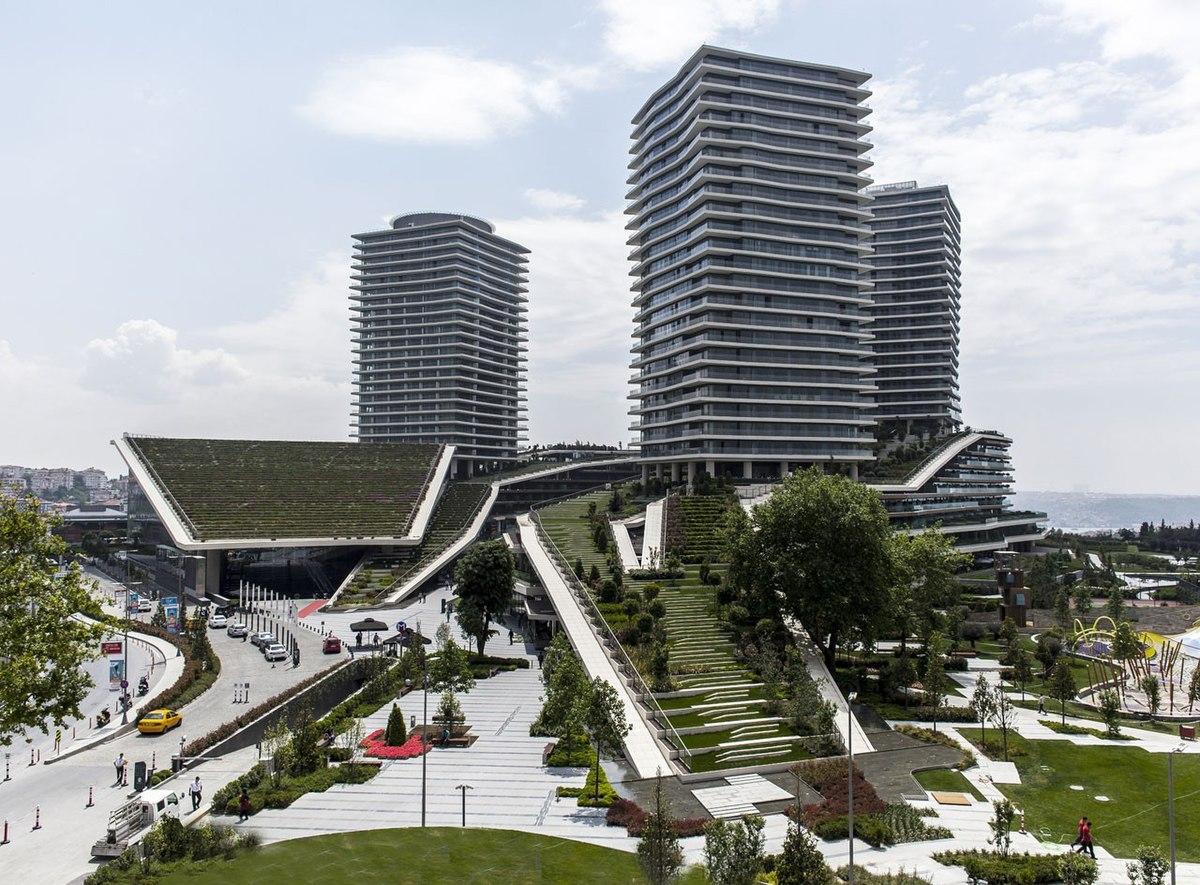 The basis for all the volumes that are part of the mall (mall, office buildings, hotel, residences, concert hall for 2500 people) is a single landscaped platform. The roof of the mall is planted with wildflowers and endemic plants.

Anyone who read books about Middle-earth will freeze in amazement when they see this work of the Swiss architect Peter Fetsch, it is so reminiscent of the dwelling of hobbits, who, as you know, lived in comfortable burrows "with a door perfectly round like a porthole." 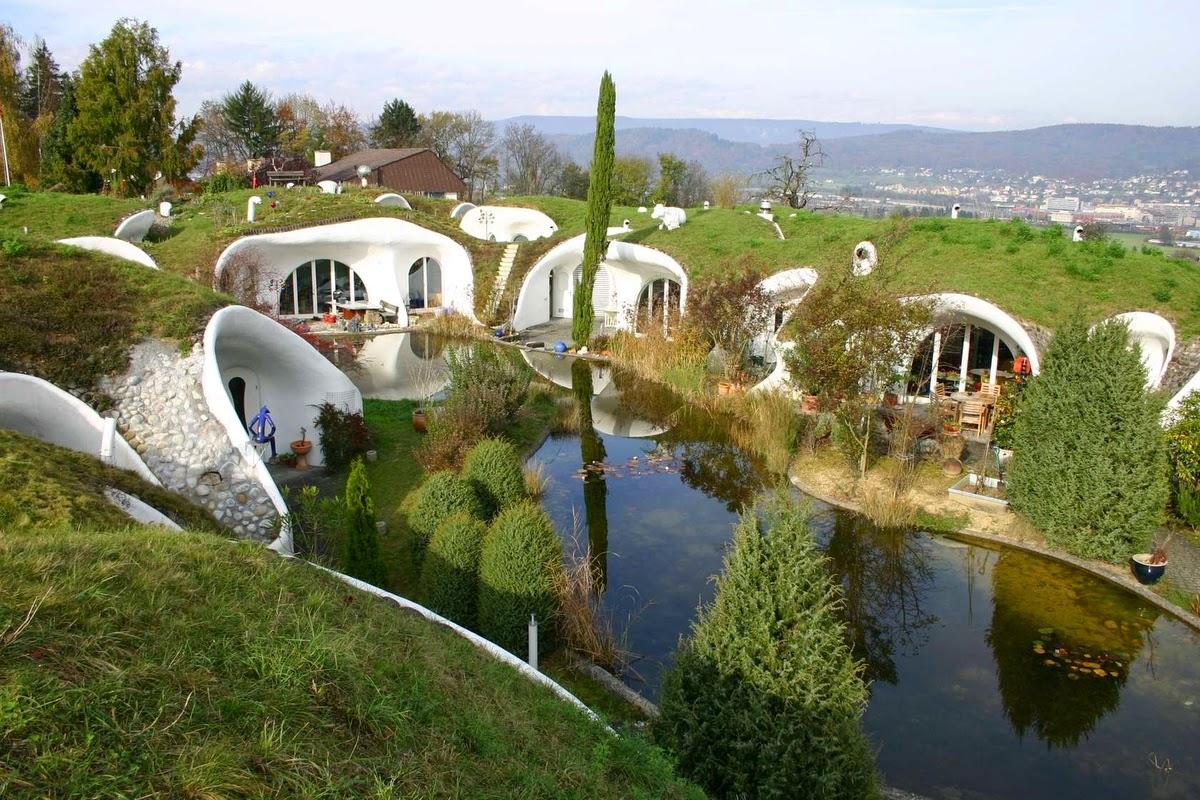 The Earth House Estate residential area in Dietikon, built back in 1993, consists of nine private houses that are built around a small pond. The roofs of the buildings are domed and covered with greenery. All this creates a completely unique atmosphere for life, as if in the bosom of nature.

Cyprus, unfortunately, cannot boast of the presence of buildings with green roofs, although individual architecture enthusiasts actively advocate the creation of such eco-spaces, which are still new to Cyprus. But in Cyprus there is another type of eco-friendly buildings - with landscaped facades. One of them is the Kaimakliotis Building in Larnaca, the creation of the architect Yorgos Solomu, brought to life by the construction company D&K E.P.S.

A unique feature is the mesh covering of the building in full height and on all four sides, along which climbing plants grow. 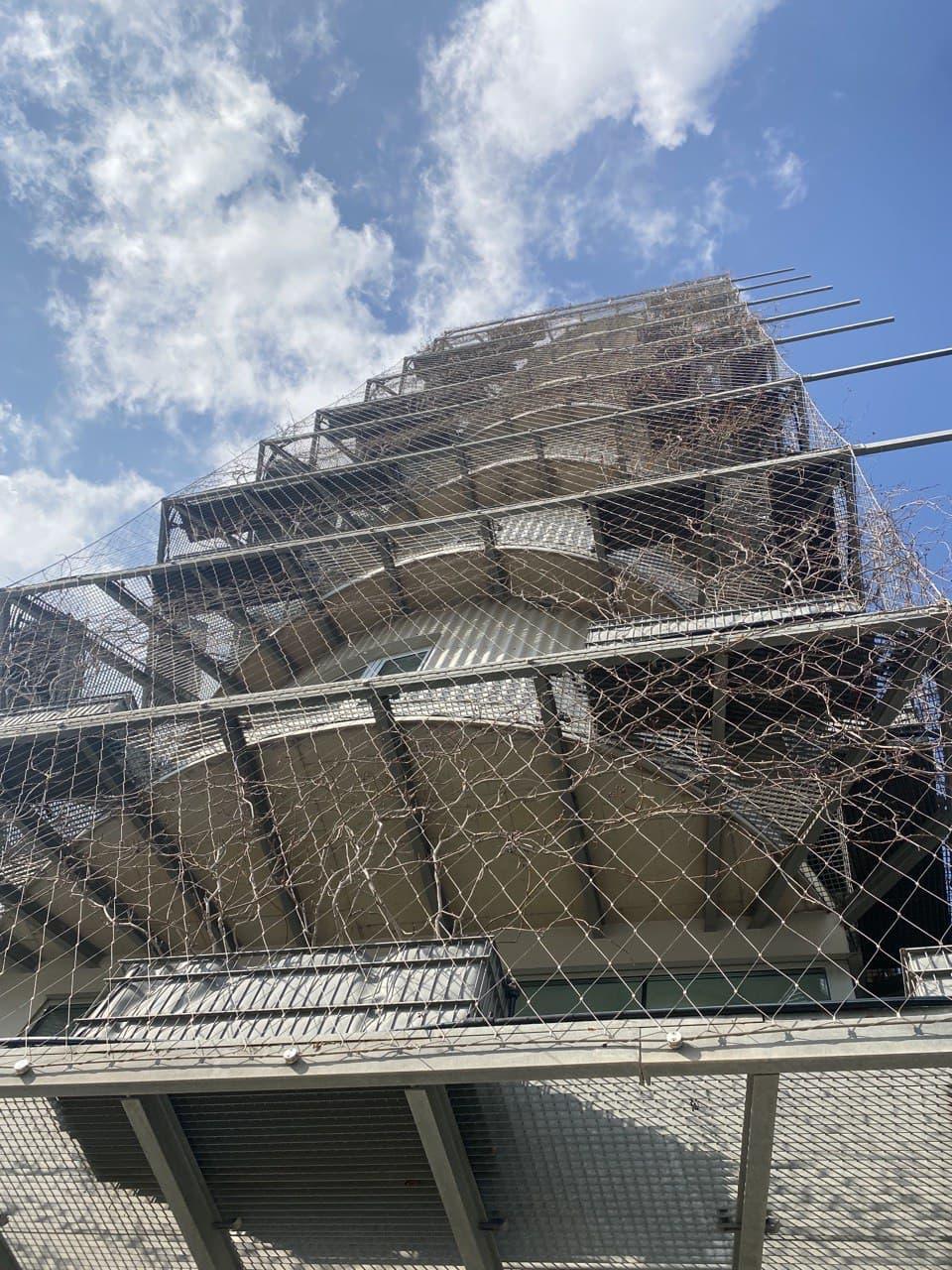 They are green for most of the year.

This produces a stunning effect of an oasis in the middle of the stone jungle. In winter, unfortunately, the leaves fall off, and the office center looks a little dull. The situation is saved by a yellow window, which gives the whole gray metal structure a festive look. 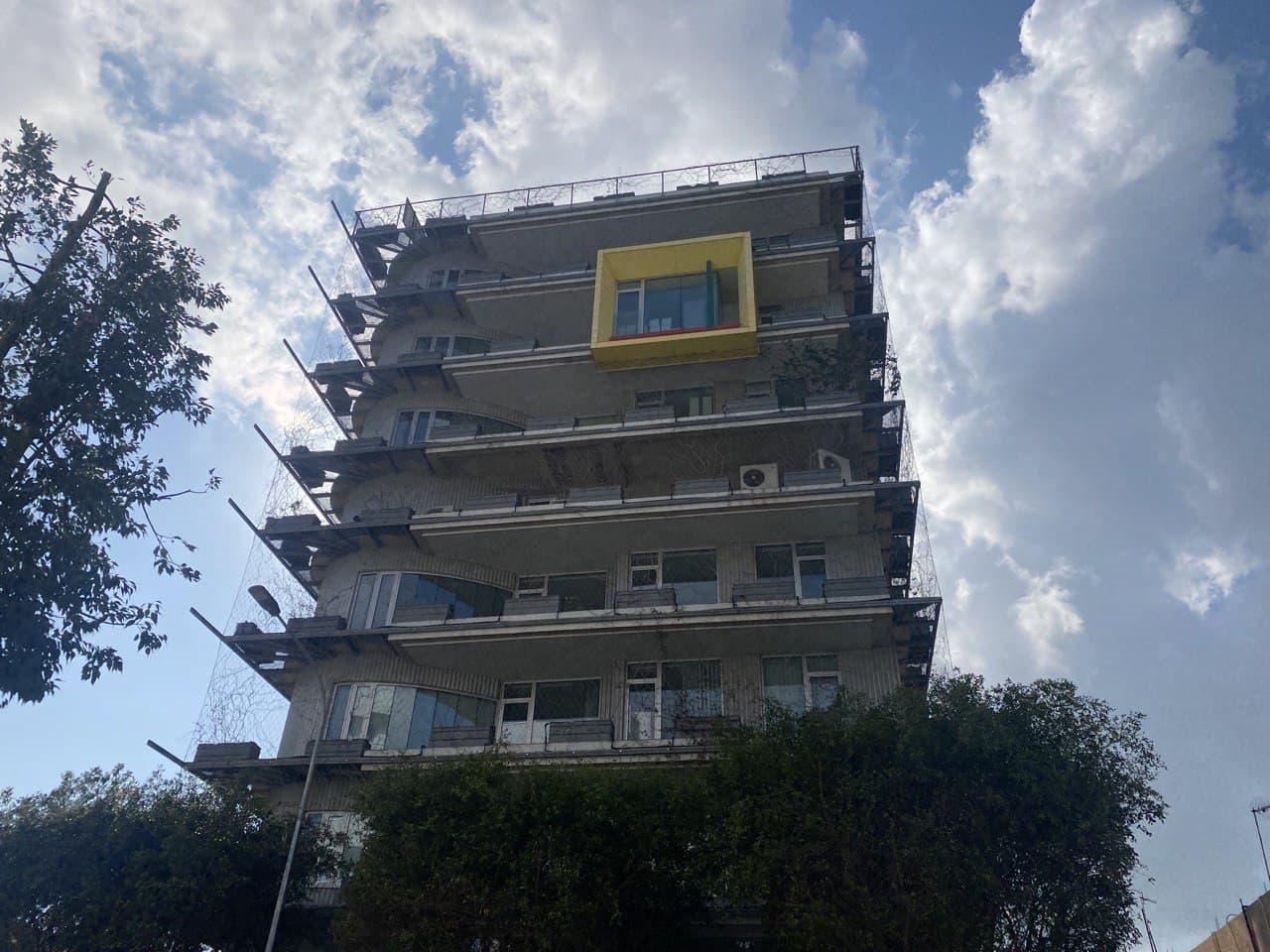 Interested in housing in Cyprus? Visit DOM. The portal presents the largest database of real estate in the country - from residential to commercial. Choose and contact professionals who will help you make the right choice!