Airbnb has begun asking guests to send “courtesy cards” that will include donations of money to their former hosts.

The short-term rental platform began asking to send “courtesy cards”, which would include donations of money to their former hosts, who lost a lot of money due to the suspension of travel.

Airbnb’s new tool appears to be another attempt to reassure hosts and ease their stress, this time by asking for contributions from former guests. A spokesperson for the rental company told that 100% of the proceeds from the courtesy cards would be transferred to the hosts.

In the spirit of reheating connections, we have developed a new feature that allows visitors to send virtual cards messages of support and encouragements to hosts who provided excellent hospitality. If they wish, visitors have the option to add a voluntary financial contribution, a company spokesman said.

However, the news of Airbnb’s new feature did not take long to provoke a public backlash. People, in fact, quickly flocked to Twitter, expressing their displeasure. 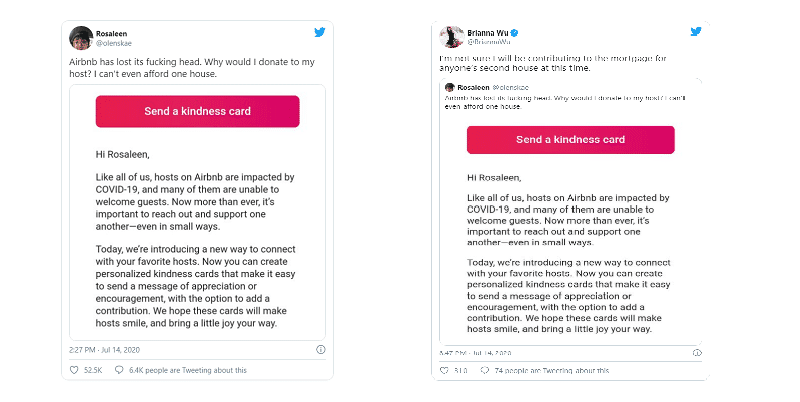 Most users pointed out that they themselves were affected by the COVID-19 crisis and are in a similar situation. They say that are also struggling to save money amid the pandemic and are wondering why it should be their responsibility to support the hosts.

The hosts, for their part, have also directed their anger at the company, claiming that it implemented cancellation policies at the start of the pandemic, which cost them even more money. Airbnb said in March, that it would spend $250 million to compensate owners for quest cancellations resulting from the pandemic.

The financial situation is particularly dire for large-scale Airbnb hosts, some of whom bought dozens of properties and built short-term rental empires that were their main source of income. About a third of the service’s properties are owned by hosts who manage at least 25 properties, according to analysis website AirDNA.