Cypriots and foreigners invest in marinas and ports

Well-known business names from abroad and Cyprus give the "present" in investment plans in key sectors of the economy such as ports, marinas, and airports to emerge as "levers" of regional and national development.

The ports and airports in Cyprus are hubs, uniting three continents, Europe, Asia, and Africa, and can "lift the weight" of the much-needed growth of the economy, especially now with the coronavirus pandemic. The investments made in the specific sectors, the business schemes, and the names of foreigners and Cypriots who have invested in key sectors of the economy.

Hermes Airports is the first and largest privatization to date in the country, paving the way for other similar projects. It is an international consortium of nine companies, which in 2006 took over the management and control of Larnaca International Airport and Paphos International Airport, based on a 25-year concession agreement (Construction-Operation-Export) with the Republic of Cyprus. The shareholders of Hermes Airports are: Bouygues Construction Airport Concessions Europe (22%), Egis Investment Partners SCA (20%), Halpi Alpha Ltd (11.34%), Hellenic Mining (11.33%), Vantage Airport Group (11 %), Aer Rianta International (11%), Iacovou Brothers (5.67%), Charilaos Apostolides (5.66%), Nice Côte d 'Céte d'Azur Airport Commerce and Industry (2%).

The new, modern building facilities of Paphos and Larnaca International Airports, which cost approximately € 640 million, were delivered for use in 2008 and 2009. Since then, they are constantly upgraded with new infrastructure and services and have won awards from the International Council of Airports of Europe, standing out as the most accessible airports in Europe. In addition to the creation and continuous upgrade of the two world-class and state-of-the-art airports, it is estimated that through their activity, Hermes Airports contributes about 4% to the national GDP. 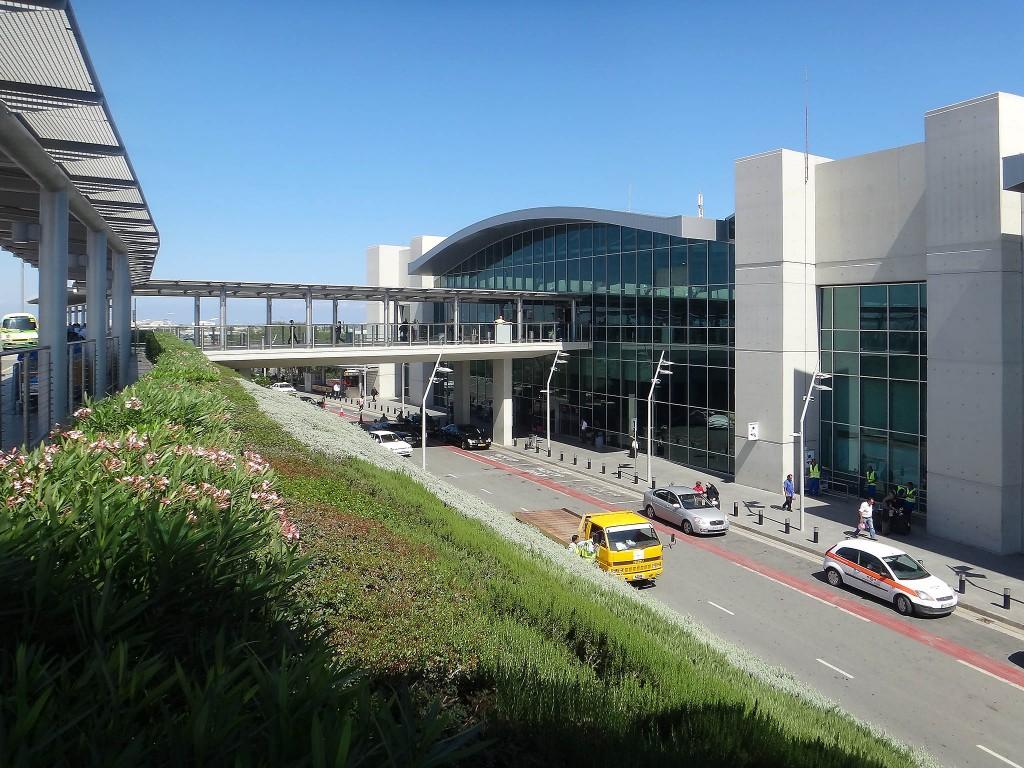 Eurogate Container Terminal Limassol is the management company of the container terminal in the port of Limassol. The Company took over the management of the terminal in 2017 with a concession contract for 25 years. Today it employs 200 people in Cyprus, the vast majority of whom are Cypriots. The owners of the Company are Eurogate International GmbH, Interorient Navigation Co. Ltd and East Med Holdings SA, The Eurogate Group, is the largest independent container operator in Europe, which has invested heavily in upgrading the infrastructure and services. The investment phase of over € 30 million was completed in March 2019 and included the purchase of two new "super post Panamax" type cranes and 17 new Straddle Carriers. With the purchase of the two crane bridges, Limassol's port is now able to serve the largest container vessels. Also, in the same investment context, the Company implemented an innovative IT system that greatly increased the terminal's efficiency while upgrading three older crane bridges and equipment received from the Cyprus Port Authority. 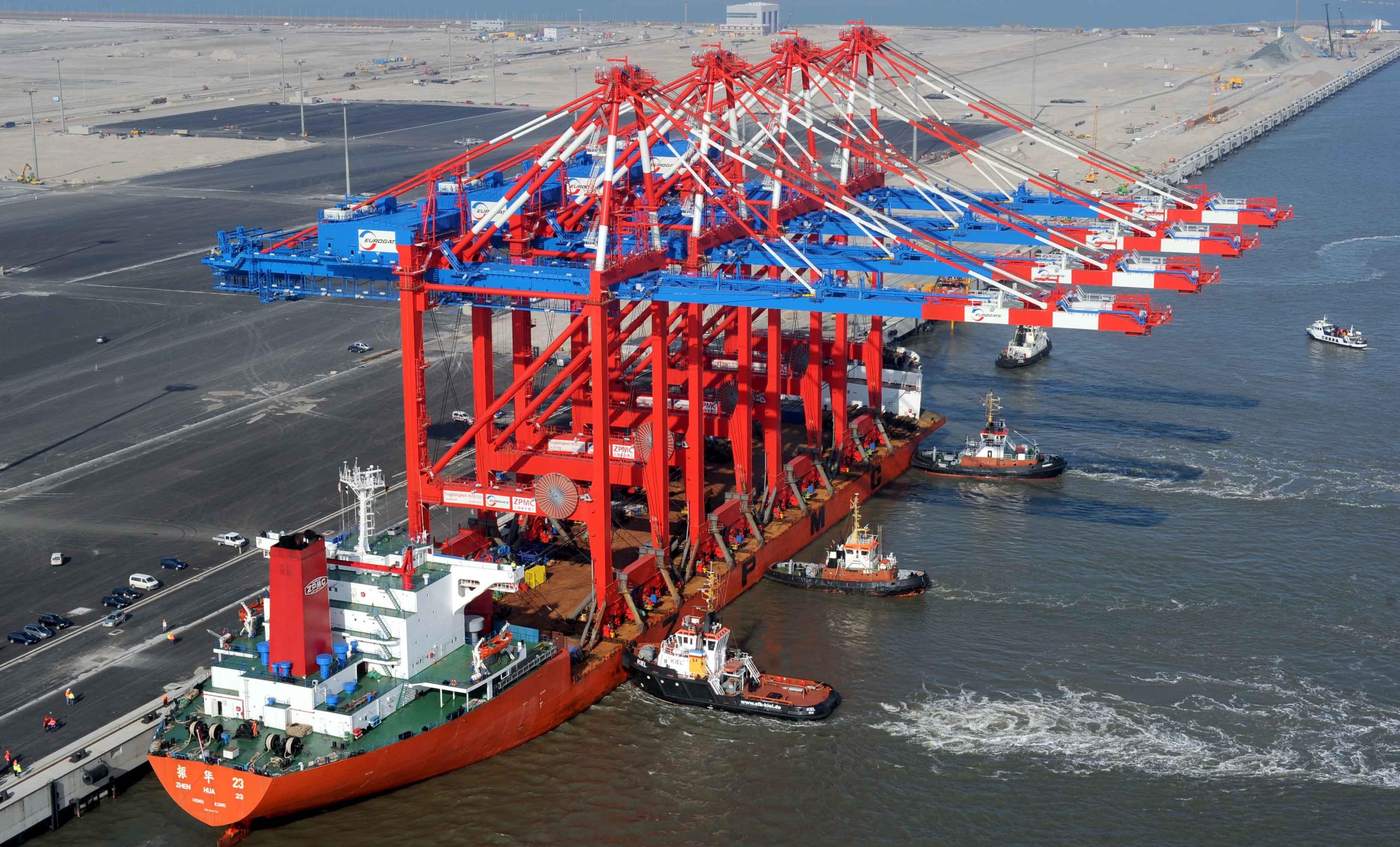 • In April 2016, DP World and its domestic partner, GAP Vassilopoulos Group, emerged as the successful bidders for the 25-year concession of the management of the multipurpose terminal and the passenger terminal in the port of Limassol. The Consortium, in which DP World participates with 75% and GAP Vassilopoulos Public Limited with 25%, has signed a Concession Agreement with the Government of the Republic of Cyprus. 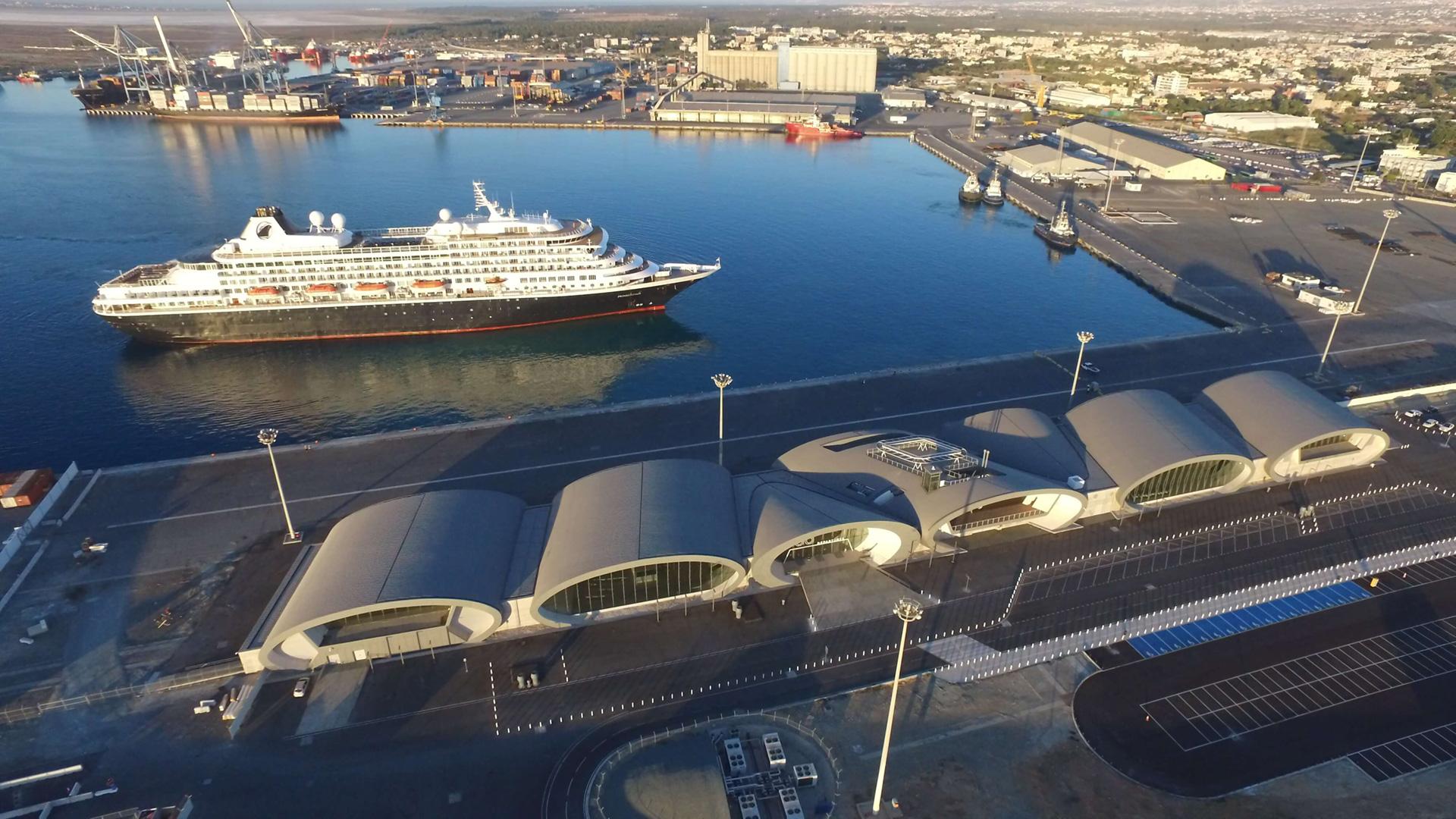 The two companies of Cypriot and Israeli interests undertook after a tender the development of the port area and the city's marina with the creation of the Consortium Kition Ocean Holding Ltd that will launch the project. The signatures between the Consortium and the Ministry of Transport for the development and management of the port and the Larnaca marina are also expected to fall. The companies Prosperity Group CY Ltd and REM International (Cyprus) Ltd with their notification announced the creation of Kition Ocean Holding Ltd, to assume a long-term exclusive right for the design, construction, and financing of development projects, management, operation, and maintenance of the port and marina of Larnaca and the commercialization of real estate in the area. Kition Ocean Holding Ltd is a duly registered company under the laws of the Republic of Cyprus, set up by Prosperity Group Cy Ltd and REM International (Cyprus) Ltd to operate as a special purpose vehicle for Kition to enter into with the Government of the Republic of Cyprus, in the capacity of the recipient of the concessions (Concessionaire), the concession contract, under which Kition will undertake the activities of the project. Prosperity Group CY Ltd is a company duly registered under KD's laws and, among other things, is active in conducting operations of a leading company / holding company (Holding Company), investment company, and investments in real estate in Cyprus through subsidiaries. It belongs to the Company Alexandrou Corporate Services Ltd, which is licensed by the Cyprus Securities and Exchange Commission and established to undertake or provide "administrative services." REM International (Cyprus) Ltd is a duly registered company under the laws of KD, and the purposes for which it was established are its operation as a holding company and, in this capacity, its ownership Eldeman's parent company 50% of Kition's capital. The Consortium's investments will make for the development of the region reach a depth of about 1 billion euros in 15 years, as announced by the Ministry of Transport at the beginning of the month with the completion of the relevant tender. 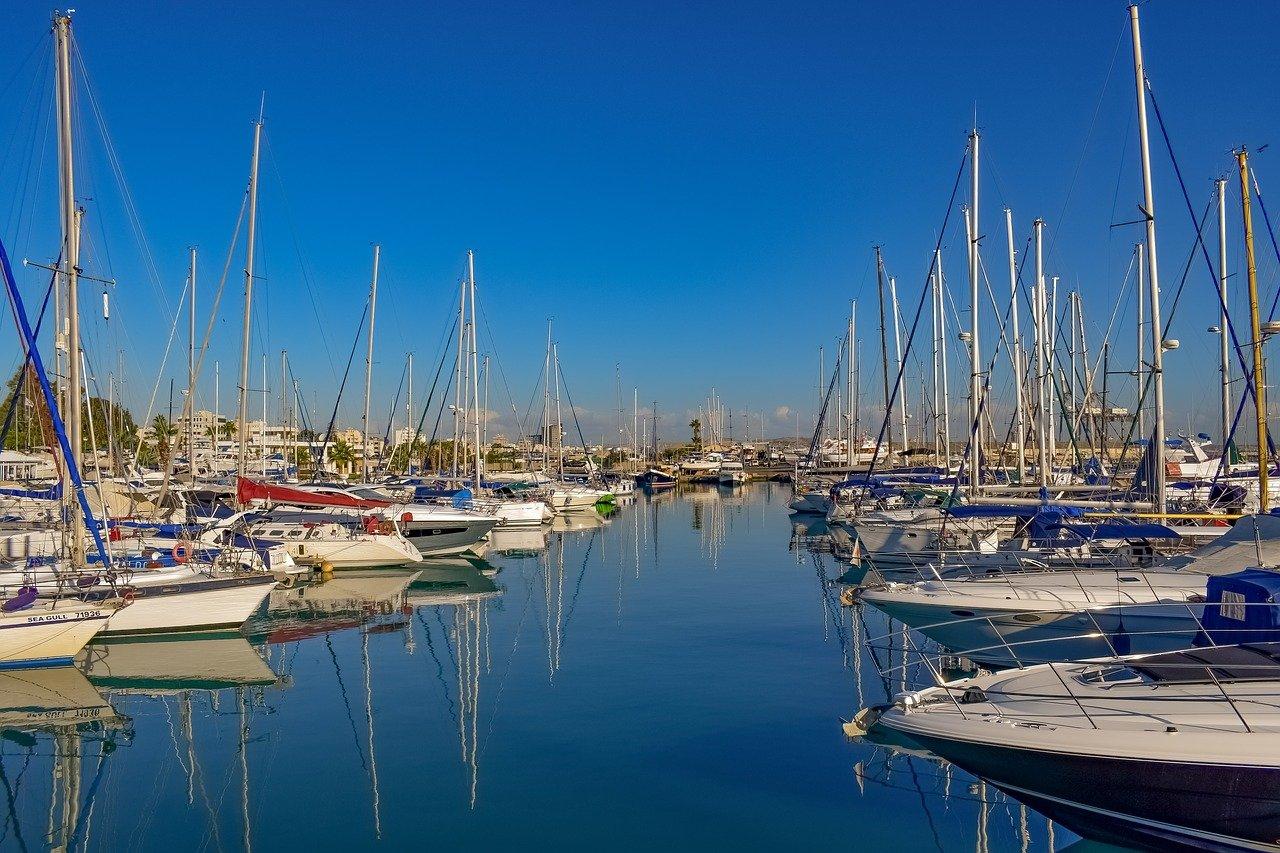 The Integrated Casino Resorts Cyprus Limited ("ICRC") Consortium consists of Melco Resorts & Entertainment Limited and The Cyprus Phassouri (Zakaki) Limited, a member of the CNS Group. The Consortium has secured a 30-year license for the development and operation of a multidisciplinary resort in Cyprus, under the name City of Dreams Mediterranean. The Company currently operates a temporary casino, the first licensed casino in the Republic of Cyprus, which opened its doors in June 2018, and satellite casinos under Cyprus Casinos "C2". With the City of Dreams Mediterranean's operation, the Company will continue to operate the satellite casinos while the process of the temporary casino will be terminated.

The total investment of the project exceeds € 550 million. It is estimated that the City of Dreams Mediterranean will create about 4,000 jobs during the construction phase and around 2,500 permanent employment with the start of its operation, contributing to about 6,500 direct and indirect full-time positions. In addition to creating new jobs, the launch of IR is expected to attract 300,000 tourists a year. In contrast, the project is expected to contribute around € 700 million a year to the Cypriot economy, amounting to about 4% of the country's annual GDP, after its second year of operation, as the pandemic will be under control.

The City of Dreams Mediterranean will feature five more world-class restaurants and bars and shopping venues inspired by the streets of old Nicosia and swimming pools, gardens, and an amphitheater with an outdoor concert venue. Its interior design will be based on Melco's international luxury standards that have been specially adapted for the multi-themed resort of Cyprus. In contrast, the exterior design of the project has a strongly Mediterranean character. 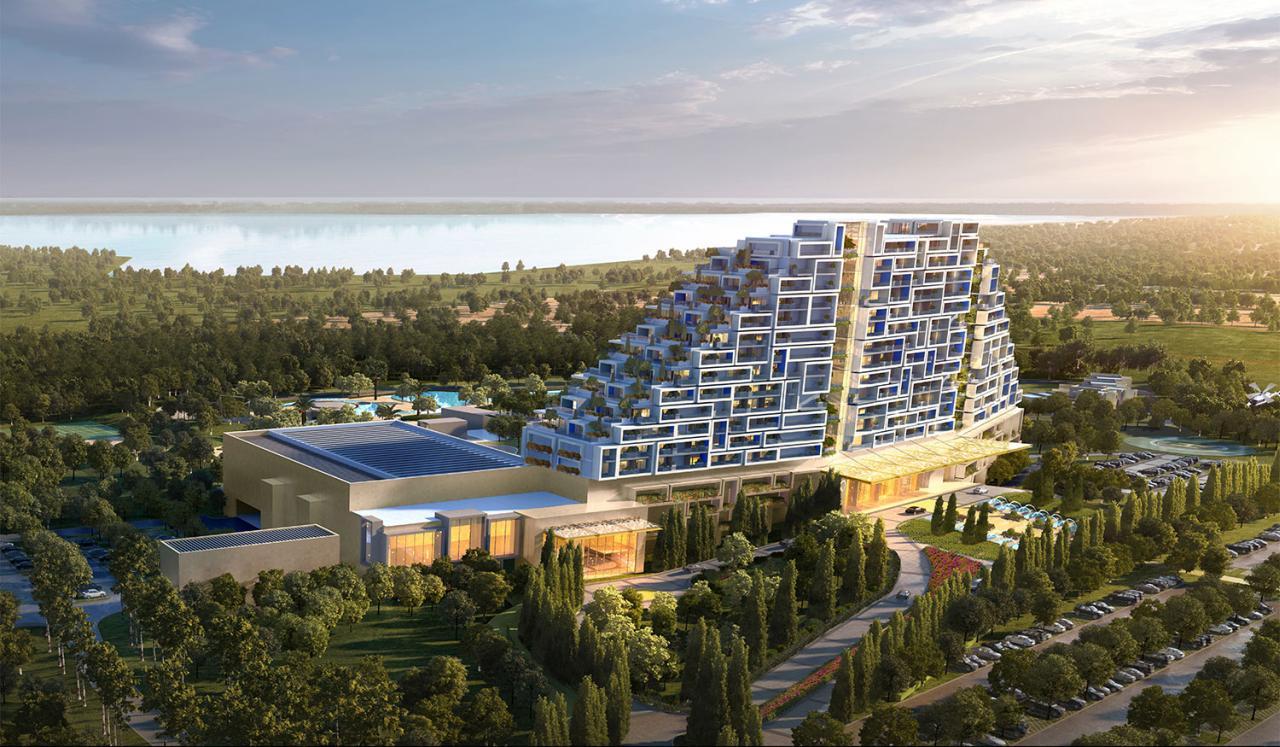 Every city and a marina and many services

The well-known Egyptian investor Nagib Sawiris is the new shareholder in the "Makronisos Marina" consortium, which has undertaken the construction of the Ayia Napa - Agia Thekla Marina in Cyprus. The construction cost of the project is estimated at € 300 million and will employ about 800 people. The project is carried out by MM Makronisos Marina Ltd, whose shareholders are Ora Developers, owned by Egyptian investor Nagib Sawiris, and the Cypriot Karamontani Group. Ayia Napa Marina, as the official port of entry of Cyprus, will offer boat owners the best possible facilities and facilities, both on land and on the water, with 600 berths. On the water, boats up to 65 meters can be accommodated, while on earth, ships up to 10 meters. 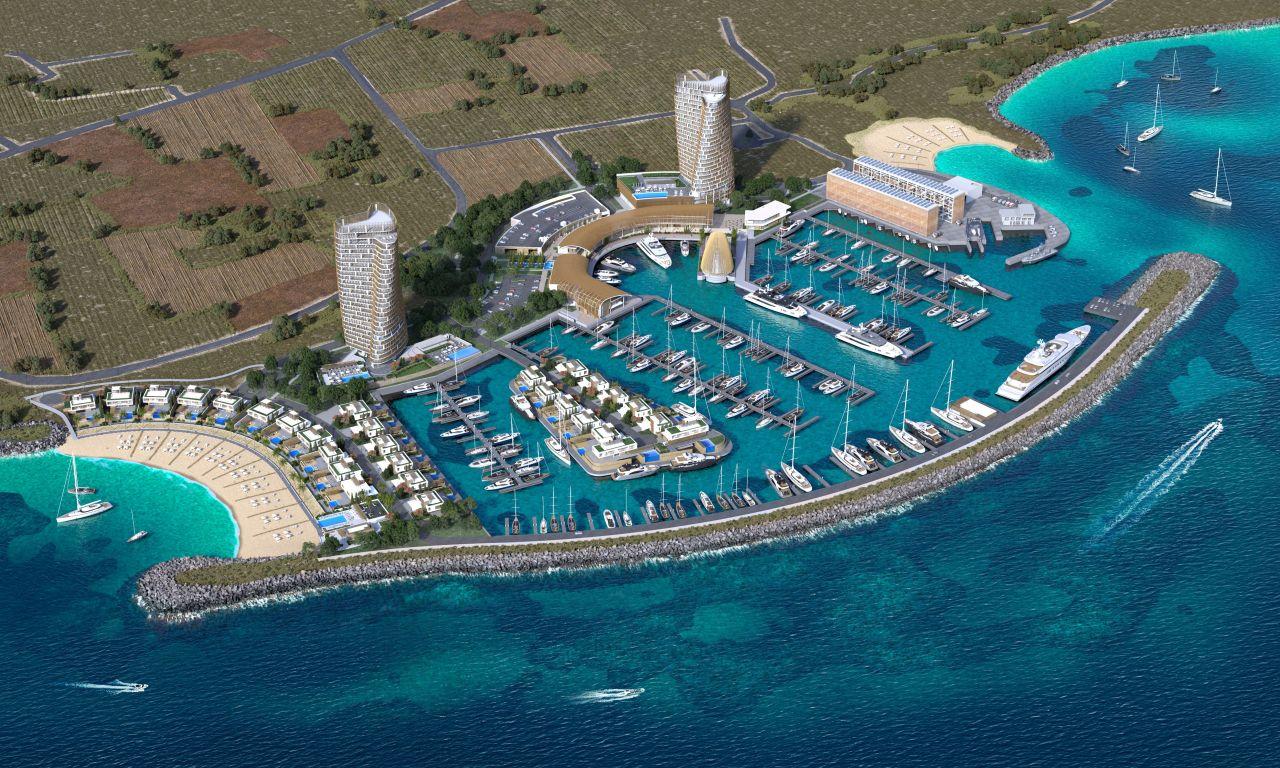 It is expected to be a reference point and attraction in the region. It will contribute in practice to the development of maritime tourism and, in general, to the enrichment of the tourist product in free Famagusta. Also, it will attract investors and bring further economic growth. In addition to the owner company PMV Maritime Holdings Ltd, partners in the project are J&P, Marina Projects Ltd, as well as Nicolaides & Kountouris Metal Company Ltd. The architect of the project is the British house Harper Downie Creative Architecture in collaboration with Kythreotis Architects and for the landscape art the house Camlin's. The project will consist of a marina with 300 berths and mixed development with residential, commercial uses and recreational areas in the area of ​​Pernera, in the Municipality of Paralimni. 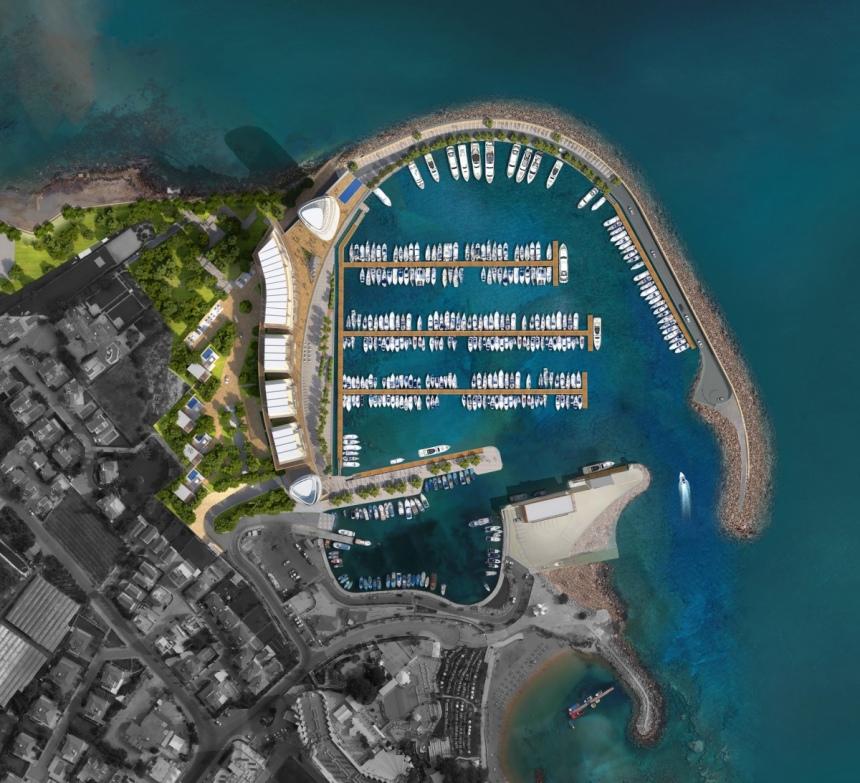 Limassol Marina is the first marina in Cyprus; it has already changed the city's face and has established itself as one of the most attractive projects in Europe. With 650 berths for luxury yachts from 8 to 115 meters long, it combines luxury apartments and select villas with private berths or direct access to the sea. The shareholders of Limassol Marina Ltd are Avax SA, Francoudi & Stephanou Ltd, Cybarco Contracting Limited, LMDC Ltd, G Paraskevaides Ltd, and Stamoland Properties Limited. The project and sales are managed by Cybarco, an international contractor and real estate manufacturer with a history of delivering quality projects to the highest standards since 1945. 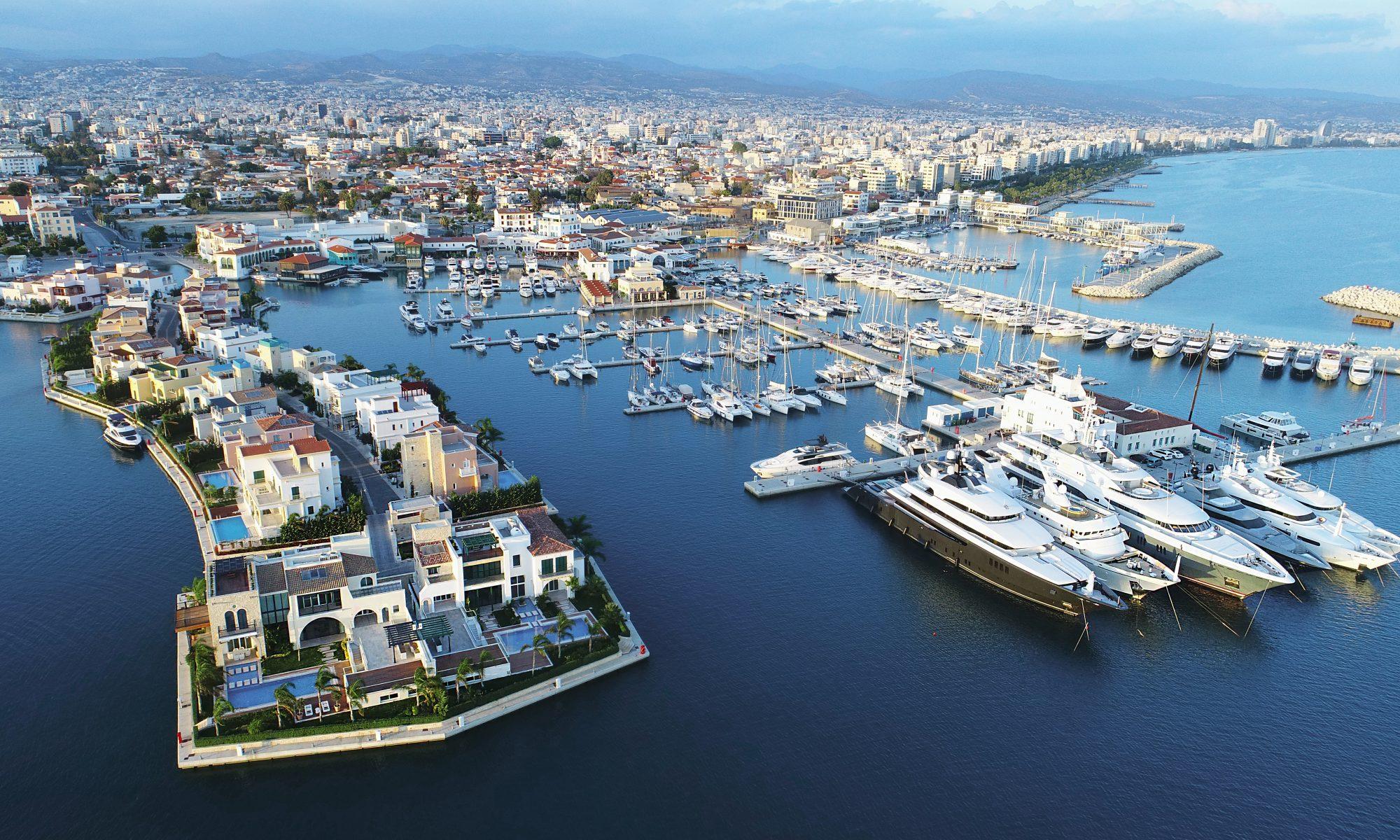