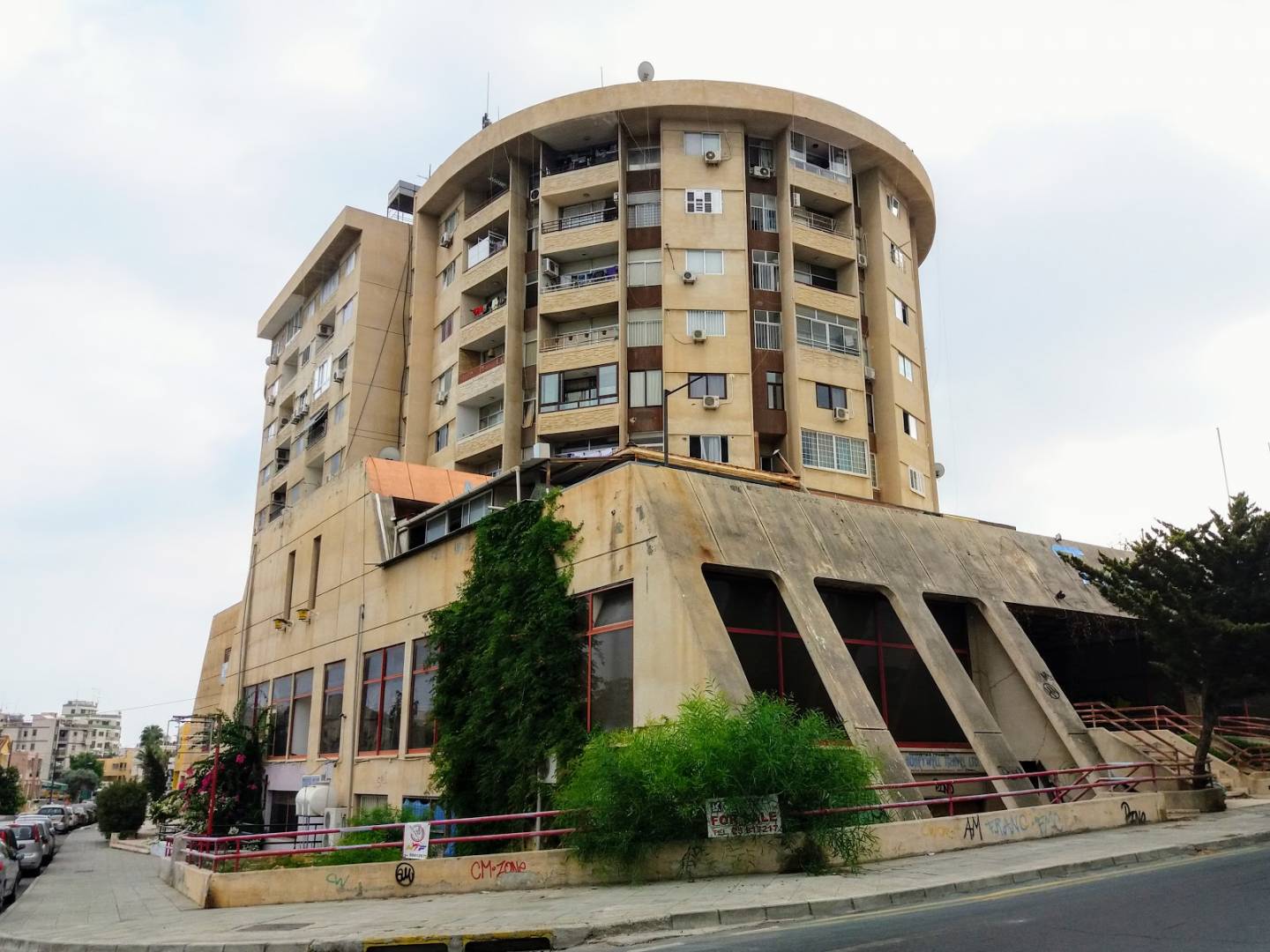 The Fysko Lotus Plaza - is a famous building in the Naafi area of Limassol.

Construction of the building began in the 1980s by a partnership with a Kuwaiti investor and an Indian company. The two investors have begun the process of building a luxury hotel called Lotus Hotel. The elaboration of the necessary studies, like architectural plans and static study to ensure the necessary permits for the construction of the hotel were assigned to the architectural office of the former Mayor of Limassol, Mr. Fotis Kolokidis. 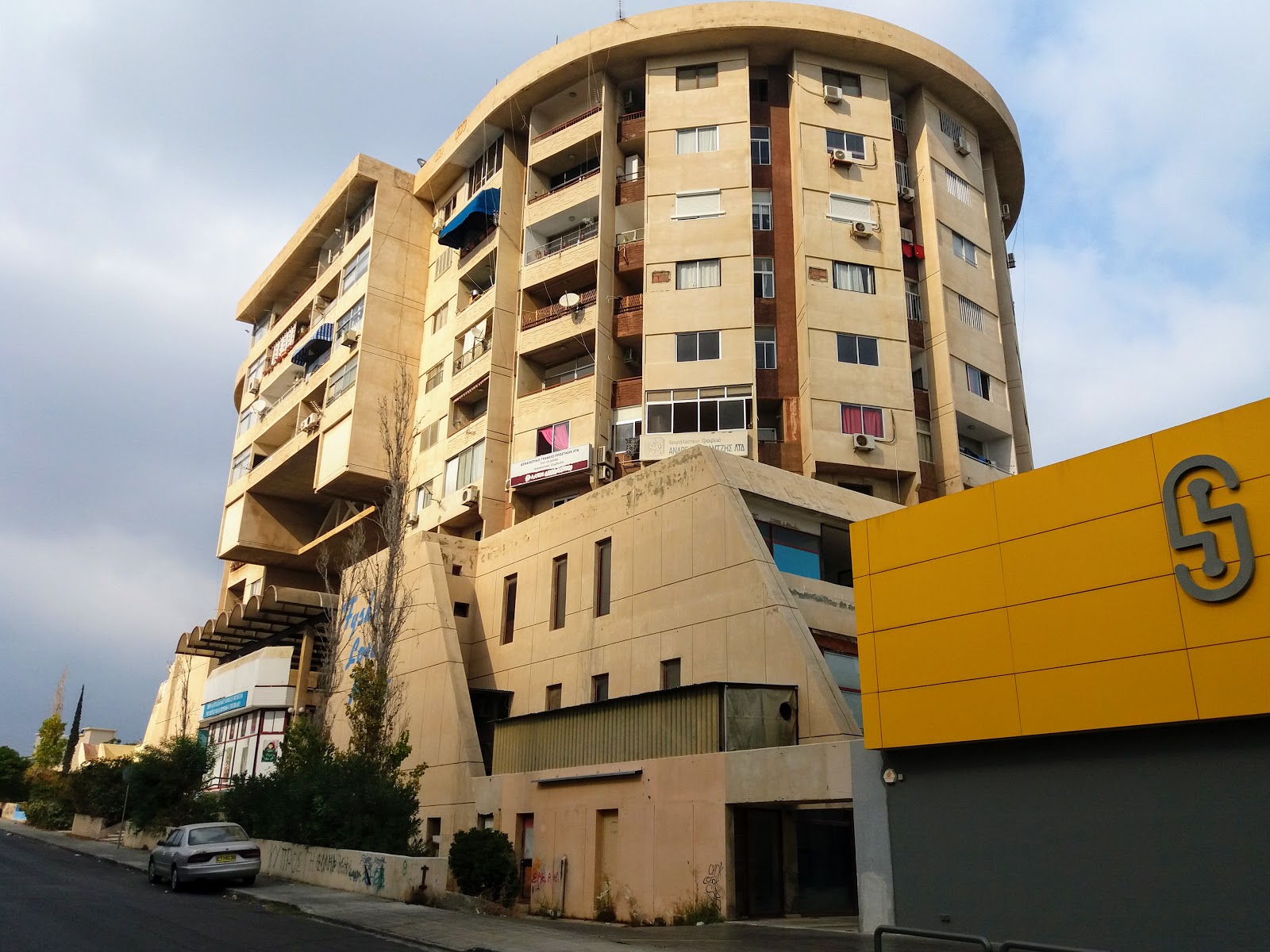 In 1982, while the construction of the building had already begun, one of the two co-owners was forced to withdraw from the operation. This dramatic development resulted in the sale of construction of a semi-finished property, after auction procedures, to the contractor who undertook the project, Fysco Contracting Ltd. After the transfer on the unfinished building to the new owner, it is decided to change its use and tun it into a shopping center and residential units. The project was completed in the early 1990s and most of the building’s stores and apartments have already been pre-sold. However, Fysco Contracting Ltd is in dire financial straits and is heading for bankruptcy. A liquidator is then appointed to manage this complex situation in which the exposed banks, the owner, and the bankrupt company are primarily involved. 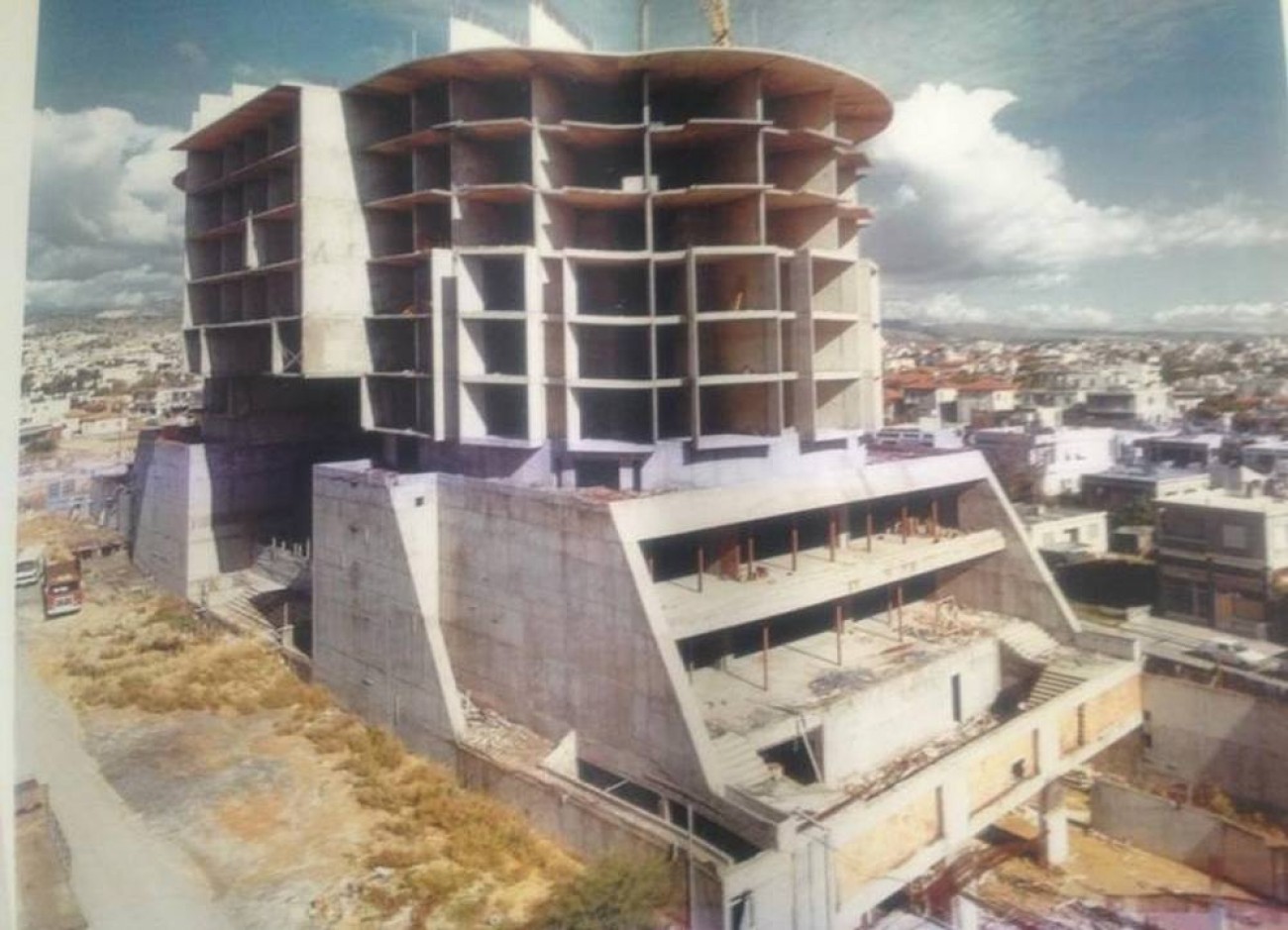 Fysko Lotus Plaza is a significant unused building stock. It is located in a privileged area of the city of Limassol, in the parish of the Apostles Peter and Paul, which combines proximity with most of the city’s main thoroughfares with many services. The ground floor, the first and second floors were intended mainly for commercial use (mini-mall) and services. Specifically, there are more than 130 stores, with easy access both from the internal common areas and from the external ones through the entrances to the various points around the building. The remaining 5 floors consist of apartments. 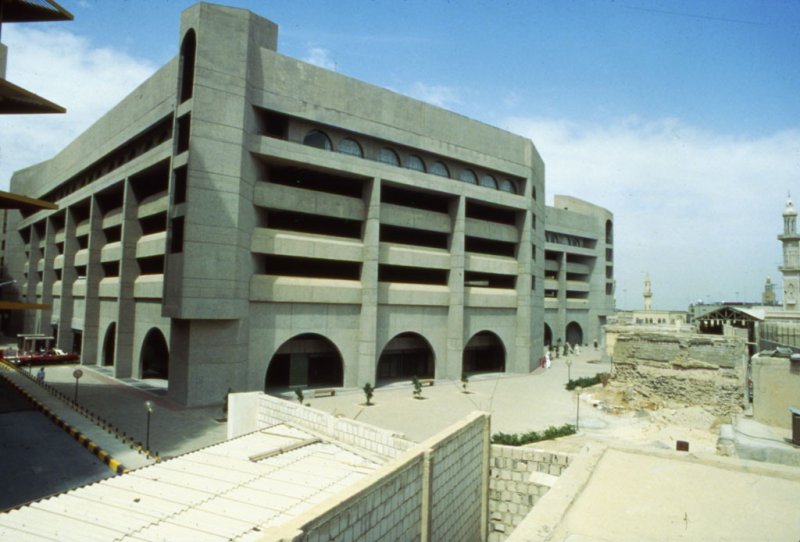 How much capital will be needed?

We have drafted a proposal that requires minimal investment. In particular, owners of commercial real estate will have the right to sell their property or convert it into shares of equal value into a limited liability company. This company will have various business activities, mainly the rental of the commercial space after the first year but also the management of business activities within the commercial department of the property. In this way, investors will have a short depreciation of their money and high dividends from the company's profits in the future. The initial capital required (including renovation and therefore expenses) ranges from € 500,000 to € 2,500,000, depending on the owners' choices. 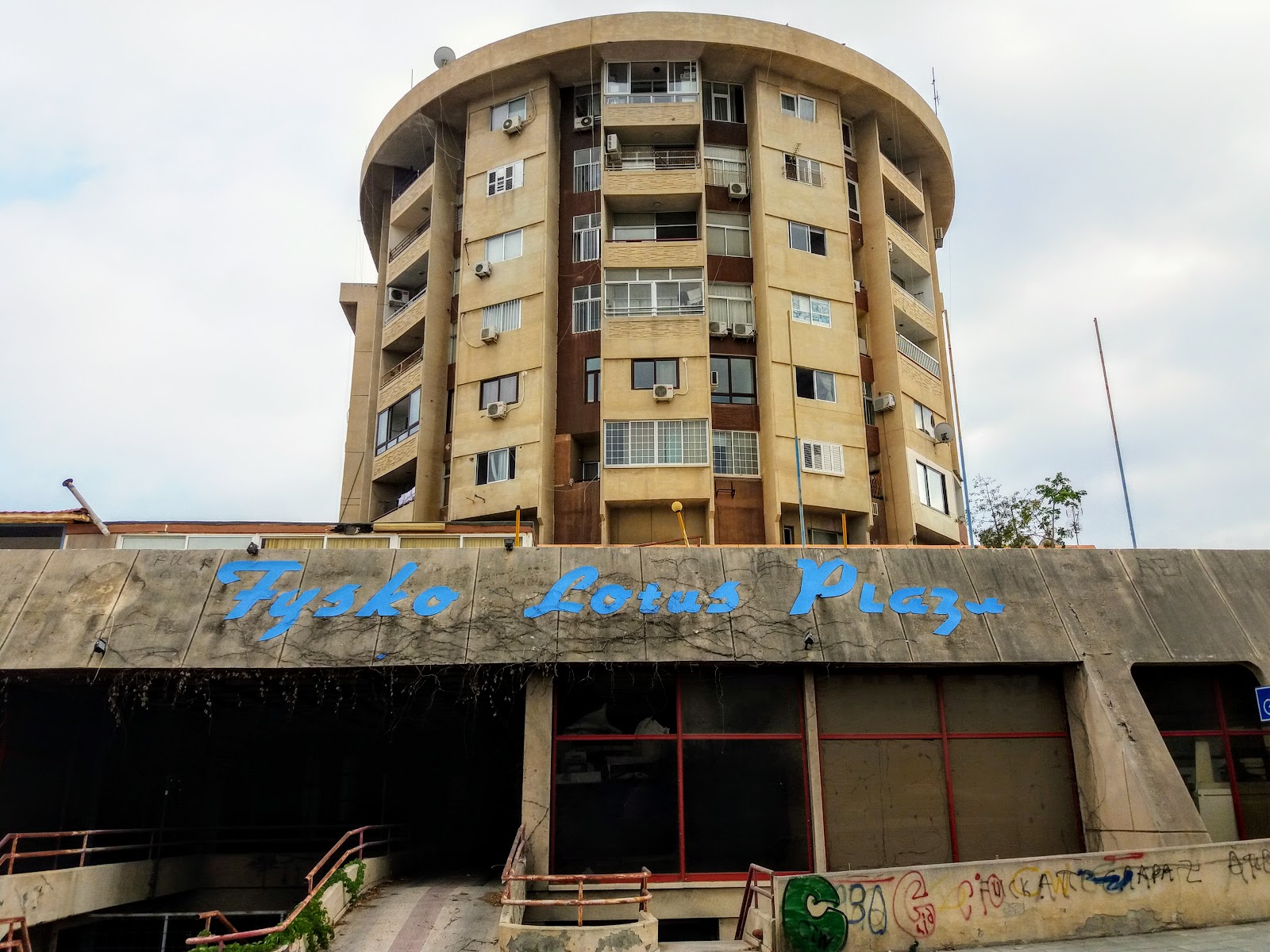 In general, the reasons of the collapse of the Fysko Lotus Plaza were ordinary greed and unscrupulous of the owners.

Not excluded, that the curving facade of the Fysko Lotus Plaza was looked like the famous Kuwait Marriott Hotel (Ramada al Sallam Hotel), that was a cruise ship.

But, the complex, without financing and maintains, turned out to be practically abandoned. 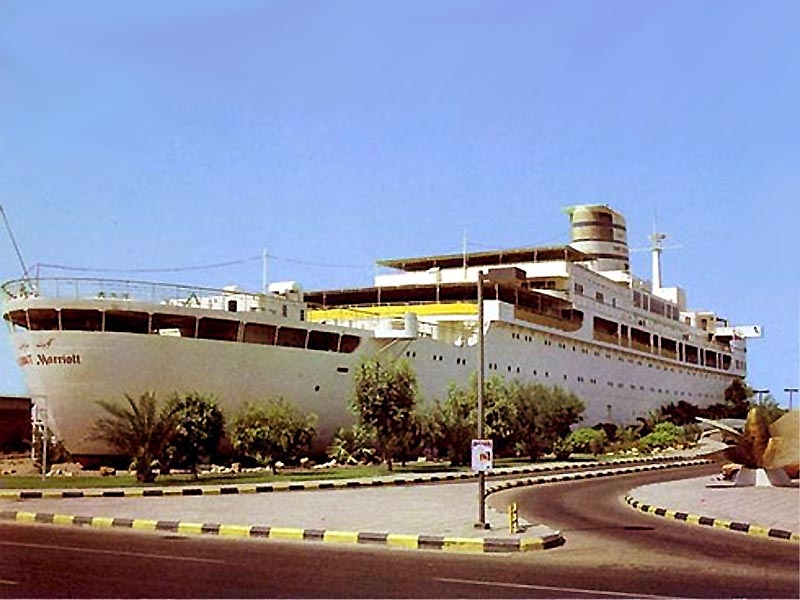 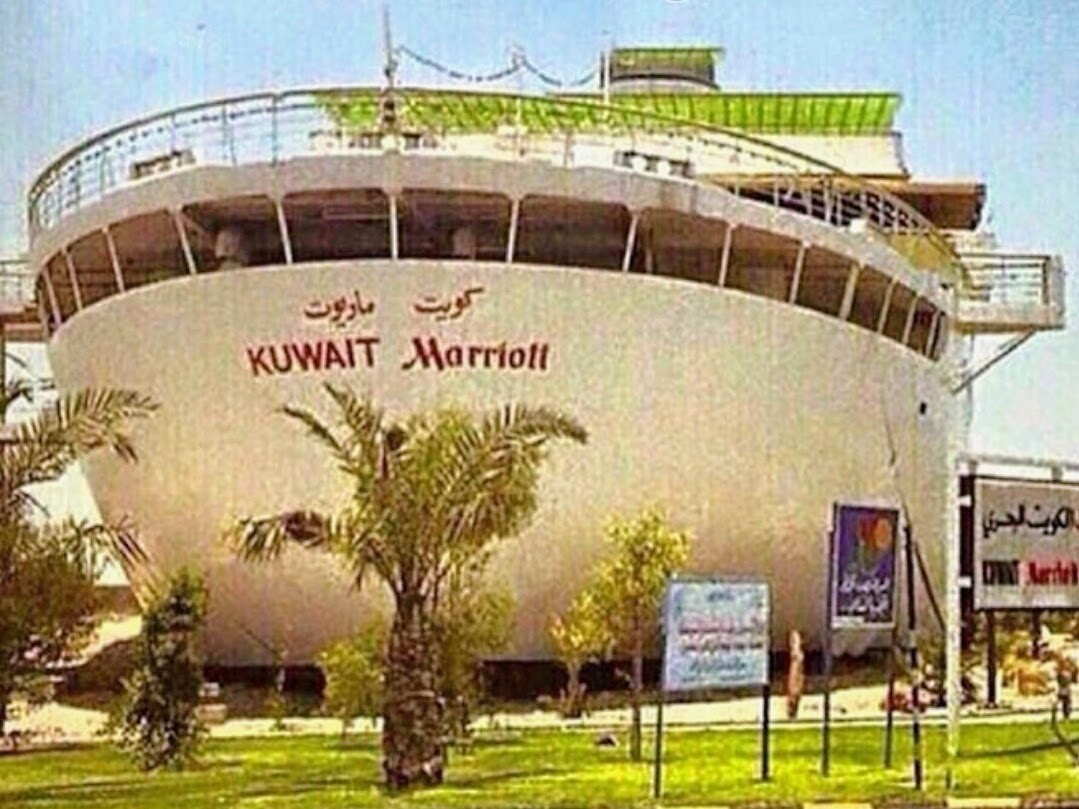 The part of the building has been converted into apartments and cheap offices.

The question about reconstruction attempts very often in the municipality, but unsuccessfully. Every year the building becomes unusable and gradually collapses, not only because it's old, but also because of the vandalism. Also, Fysko Lotus Plaza regularly appears in the news, including serious crimes. 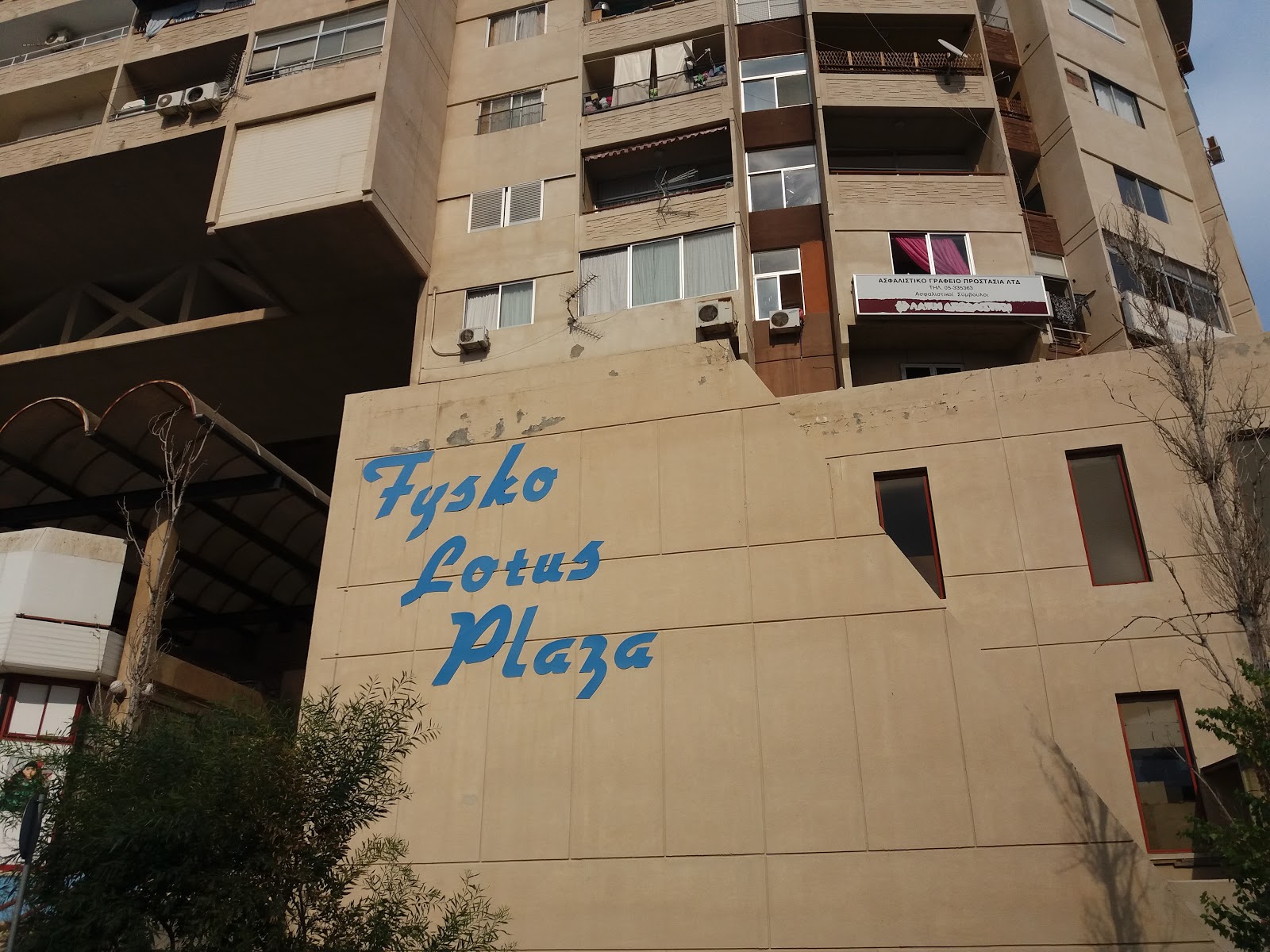 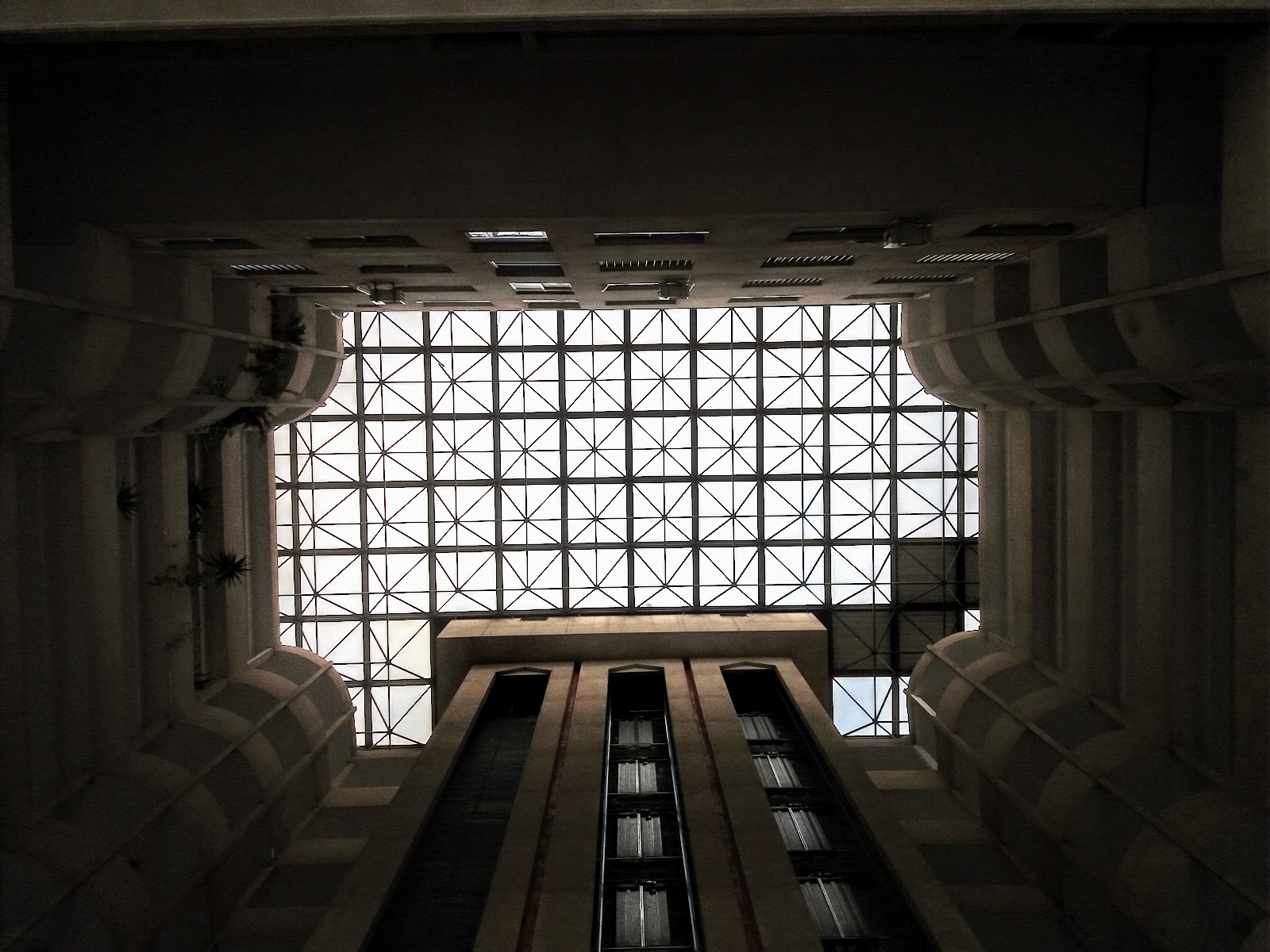 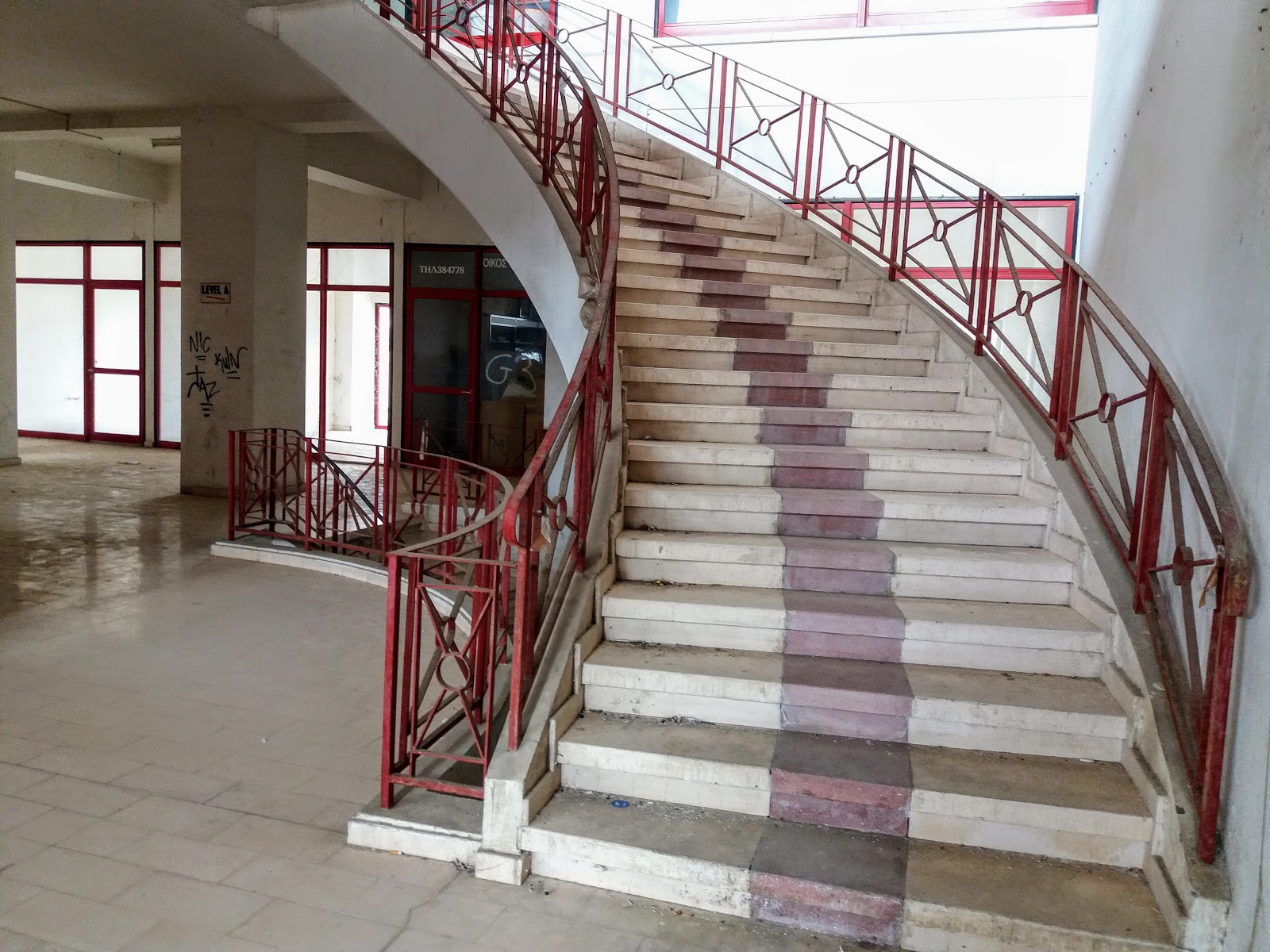 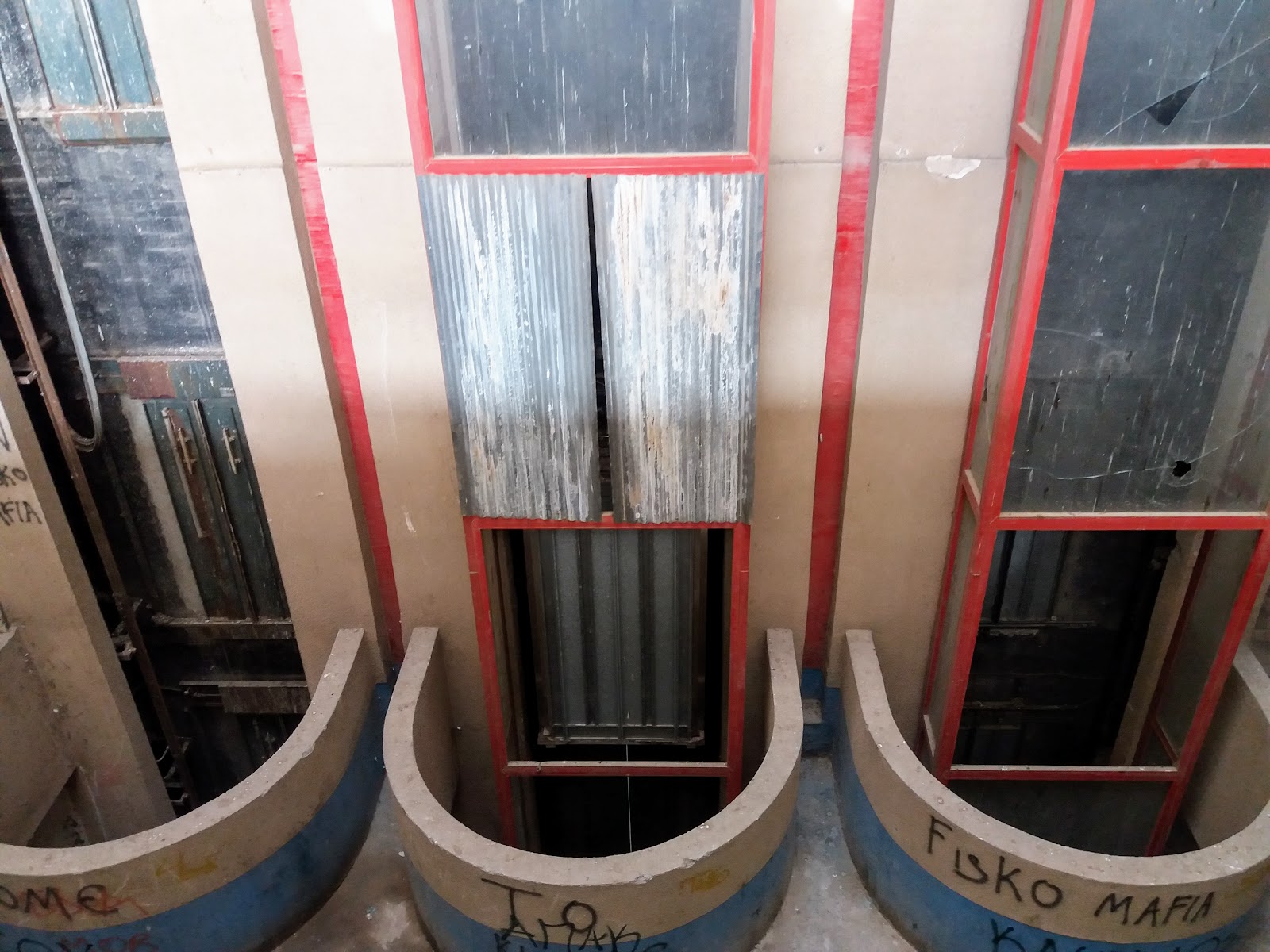 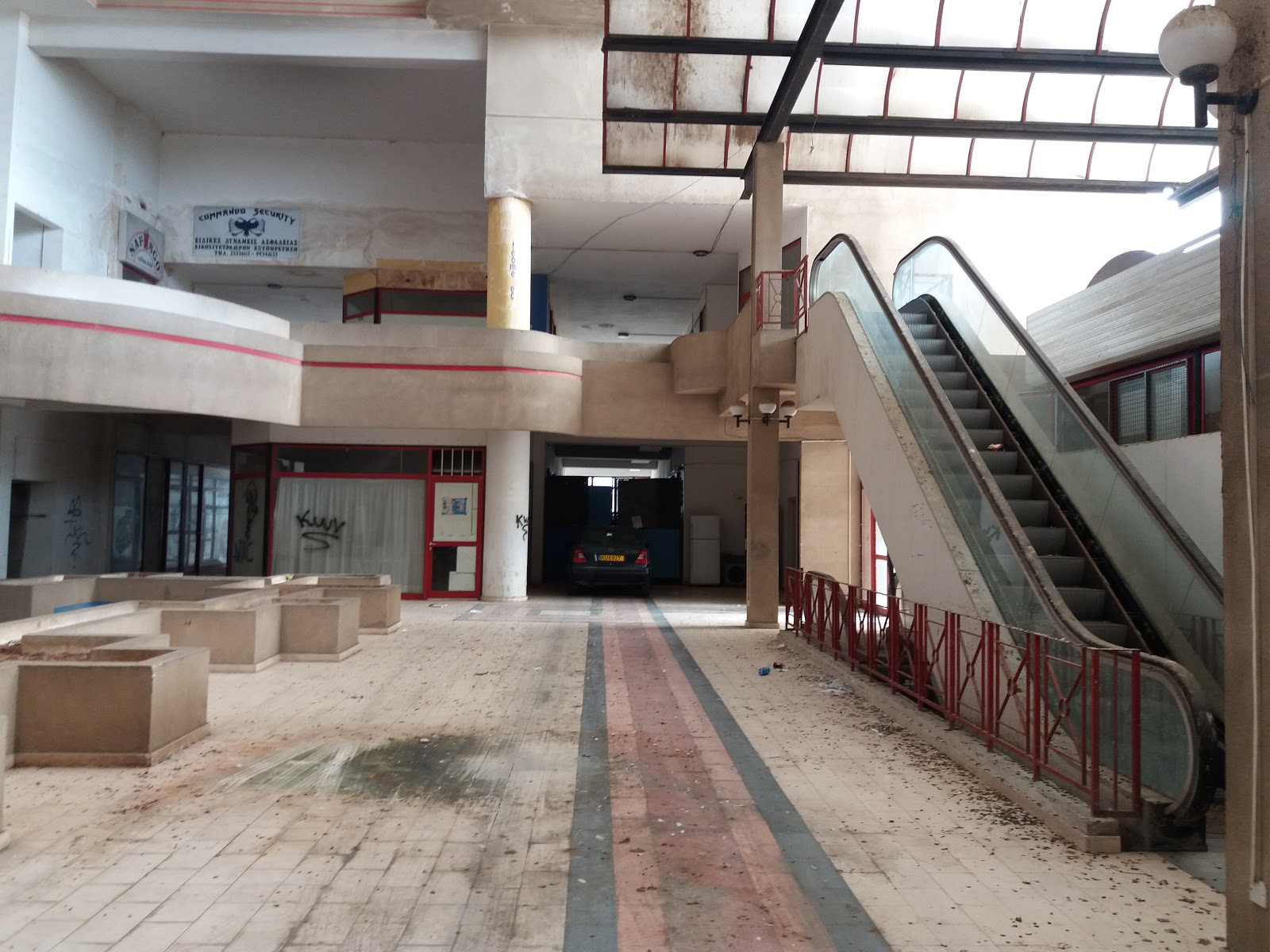